Matt, of Tex’s Tackle, reports that redfish have been abundant in the marshes and around ICW docks over the past few weeks. Fresh shrimp, cut mullet, or live mud minnows will always get a bite, as will Z-Man and Gulp soft plastics. The less-pressured schools will hit a topwater or gold spoon as well.

Speckled trout fishing has been productive inshore, with MirrOlures and soft plastics rigged with a light weight and fluorocarbon leader producing the best. A few big bluefish have been caught in the creeks, but not in any big numbers. They will hit topwater lures, swimbaits, or cut mullet fished on the bottom.

Surf fishing has been producing puffers, sea mullet, and a handful of small bluefish. The bite should continue to improve in the coming weeks, with more black drum, red drum, small flounder, croaker, and bluefish moving onto the beach. Chopper blues should be moving in any time now, too.

Nearshore bottom anglers have been primarily targeting sea bass. The further you go offshore, the more consistently you will catch keepers, but some fish are being caught at ledges as close as three miles off the beach. Squid on bottom rigs over hard structure should produce, as will Lil Man Roscoe jigs, Stingsilvers, or 2 oz. bucktails.

The first false albacore and bonito are making their way to the beach, but the water still needs to warm up a little bit more for them to come all the way in.

Lots of kings are being caught on Drone spoons, strip bait rigs, and dead cigar minnows near Frying Pan Tower. A few of them have been in the 40 lb. range, but the bulk of the kings have been smaller. Troll over ledges and structure or stay around any bait balls you find to get a bite.

Gulf Stream anglers are bringing in big blackfins and a handful of yellowfins on small ballyhoo rigged on fluorocarbon, Green Machines, and Cedar Plugs. Using teasers like spreader bars, birds, and Daisy Chains will help bring in more fish as well.

Wahoo fishing has been productive on the shallow side of the Stream, and there were also a handful of sailfish and mahi caught in the previous week.

On the bottom, triggerfish, beeliners, grunts, and a variety of snapper are biting out near the break. 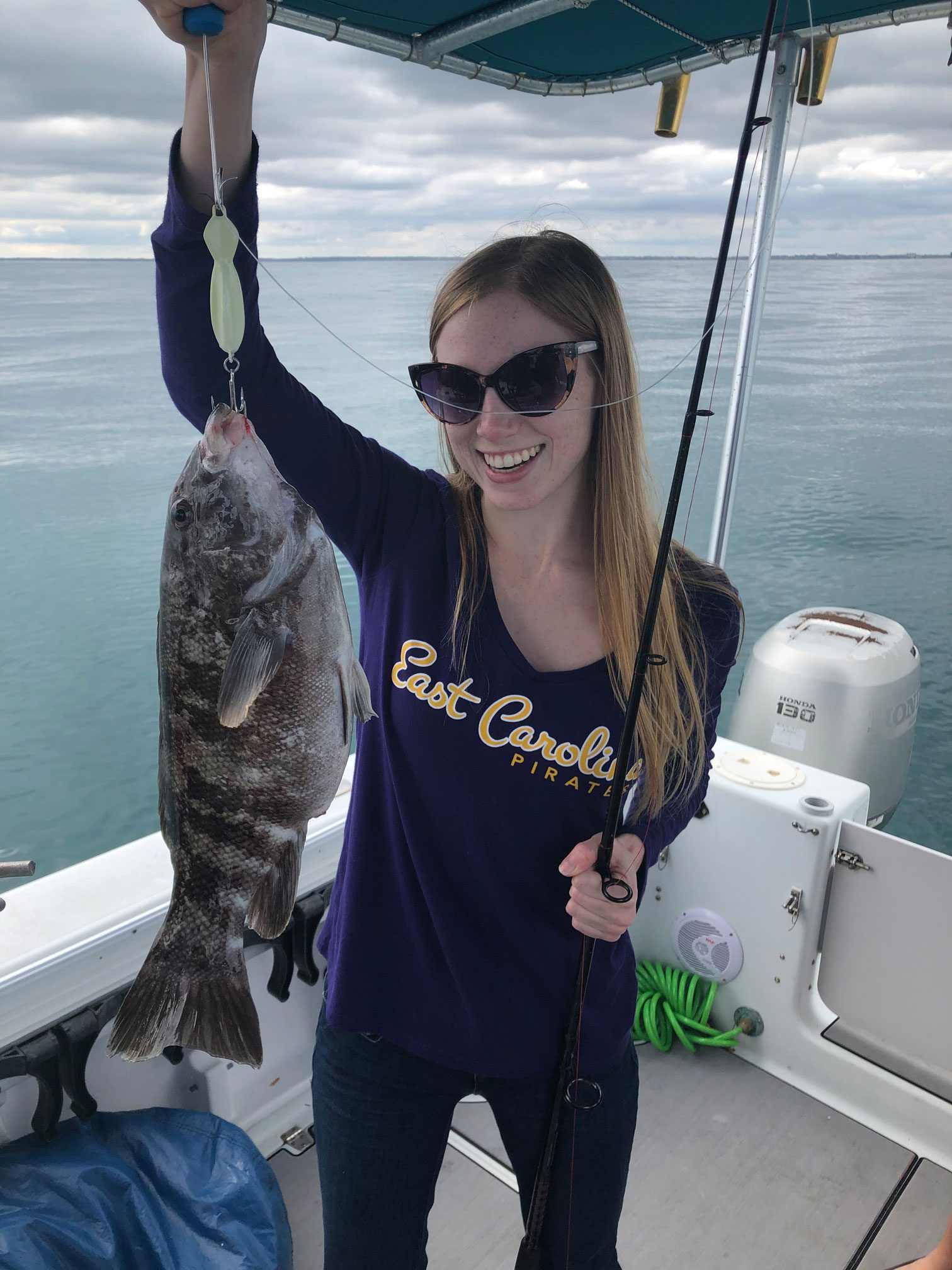 Lea Lipscomb, of Wilmington, NC, with a 5 lb. tautog. The ‘tog hit a 2 oz. Blue Water Candy Rosco jig near the Liberty Ship.

Arlen, of Intracoastal Angler, reports that red and black drum have been chewing around deeper docks and boat basins on live and cut shrimp. The reds are also starting to spread out some along the flats, with Chasebait flick prawns and Berkeley jerk shads accounting for most of the bites. Look for topwater lures and gold spoons to produce as soon as the water temperature approaches the mid- to upper-60s.

Speckled trout fishing has been decent, with fish up to 24” coming in, though most of them have been smaller. Fishing slowly with natural colored Trout Tricks and Yo-Zuri 3DS minnows around deeper marsh banks and creeks will produce.

A few flounder are starting to show up.

The surf has been holding whiting, puffers, and the occasional black drum on cut shrimp and Fishbites.

Nearshore anglers have been finding small blues, sea bass, tautog, and gray trout on the nearshore reefs. Shrimp, squid, or 1-2 oz. jigs on the bottom have been attracting the most fish.

False albacore have been in the 5-10 mile range, with most of the action mainly on casting jigs. A few Atlantic bonito have been sighted, but nothing has been confirmed. Look for them to show up around the Liberty Ship and 5 Mile Boxcars any day.

King mackerel fishing has been the best in the 35 mile range, but that will rapidly approach the 10 mile range as ocean temperatures continue to warm. Trolling cigar minnows, Deep Divers, and Drone spoons will get bites.

Wahoo fishing has slowed a bit, but good catches are still coming in, especially around the Nipple. Ilander/ballyhoo combos and high speed lures are both producing. Larger blackfins have also been caught in the same area and around the Steeples, while yellowfins have been coming from the 200 line north.

Jamie, of Seagate Charters, reports that red drum are still biting along the ICW and on the beachfront, with speckled trout and flounder coming into the mix as well. Z-Man and Blue Water Candy soft plastics have been doing the most damage.

Atlantic bonito, false albacore, and chopper bluefish are right around the corner. 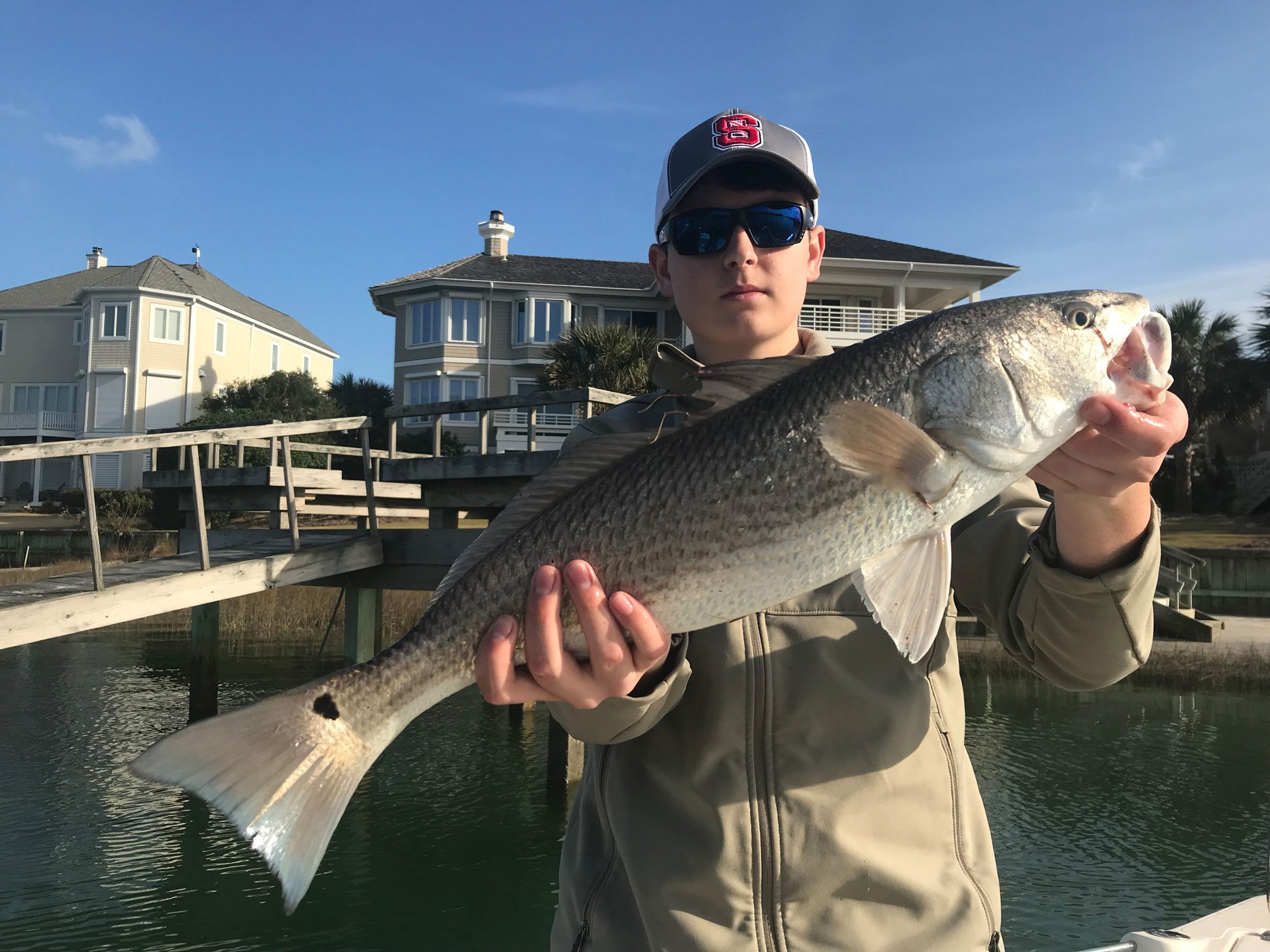 Jarrett Caveness (age 15), from Hampstead, NC, with a 6 lb. upper-slot red drum that fell for fresh shrimp around some Figure 8 Island docks.

Guion, of Green Creek Outfitters, reports that a lot of small speckled trout are chewing in the creeks behind the local islands, with a few scattered keepers mixed in. Any kind of artificial shrimp imitation (such as Gulp) will work when pinned to a light jig head.

Red drum are starting to bite artificials out on the flats, though some are still schooled up in their usual winter spots around ICW docks. Any kind of fresh cut bait, whether it’s pinfish or shrimp, will work (the fresher the bait, the better the bite) on a Carolina rig with a 1/4 oz. or 1/2 oz. egg weight.

Chopper blues have started to move in, and some baby Atlantic bonito have been spotted out in the ocean.

Rick, of Living Waters Guide Service, reports that nearshore fishing has been a little slow, though some blues and false albacore have come in from the 50-70’ range. The bite should get better soon, though.

Wahoo, blackfins, and sailfish are still making up the majority of the troll bite, and the first mahi are starting to come in. Jigging has been good for amberjacks, a few African pompano, and blackfins. Popping was excellent last week, as the first flyers came in.

Matt, of Johnnie Mercers Pier, reports that the mullet bite has been strong and some false albacore are starting to swim around the pier.

Undersized flounder are being caught, and bluefish should be biting any day.

Trout and croakers are being landed here and there. Shrimp, as well as artificial bloodworms and sand fleas, have accounted for most of the bite.