Matt, of Tex’s Tackle, reports that inshore red drum fishing has stayed consistent, with schools of slot-sized fish swimming on the flats behind the islands and bigger fish lurking in the inlets and out in the ocean. Topwaters, gold spoons, soft plastics, and live bait have all been getting bites.

Topwaters and suspended baits (like the Rapala X-Raps) have been landing speckled trout, especially early in the morning and late in the day.

Black drum, sheepshead, and more reds can be found around ICW docks and bridges, where any type of crab, sand fleas, and shrimp are all good bait choices.

Surf fishing has been hit or miss, with a few sea mullet, pompano, croaker, and black drum coming in here and there. Shrimp, cut mullet, salted clams, and Fishbites are all good options for bottom fishing, and casting jigs may pick up a bluefish or spanish mackerel. Fishing at night has produced the occasional redfish.

Flounder fishing has been great at the nearshore wrecks, with both good numbers and sizes. Schools of big reds and some gray trout have been moving through the same areas. Carolina-rigging a live mullet or pogie should draw strikes, and Gulp-tipped bucktails still can’t be beat.

Spanish fishing has been consistent but slower, with some big fish in the mix. Clarkspoons behind planers, Deep Divers, and Spanish Daisies will all work, but live pogies and finger mullet are great for catching the biggest spanish.

King mackerel fishing has been strong at the wrecks and ledges from the beach out to 25+ miles, where scattered mahi and sails are also being found. Blue Water Candy Wedgies with dead cigar minnows, squid, or small ballyhoo have all been getting bites, and Deep Divers and Drone spoons are worth putting in the spread, too.

Gags can be found on the ledges in the 15+ mile range, along with sea bass, porgies, and grunts. Scamps, red grouper, beeliners, and a few triggerfish have been biting in the 30+ mile range.

Gulf Stream fishing has been slow for the most part, but there have been a few blackfin tuna, with some fish going over 20 lbs. Blue marlin, white marlin, and sailfish are still a possibility. 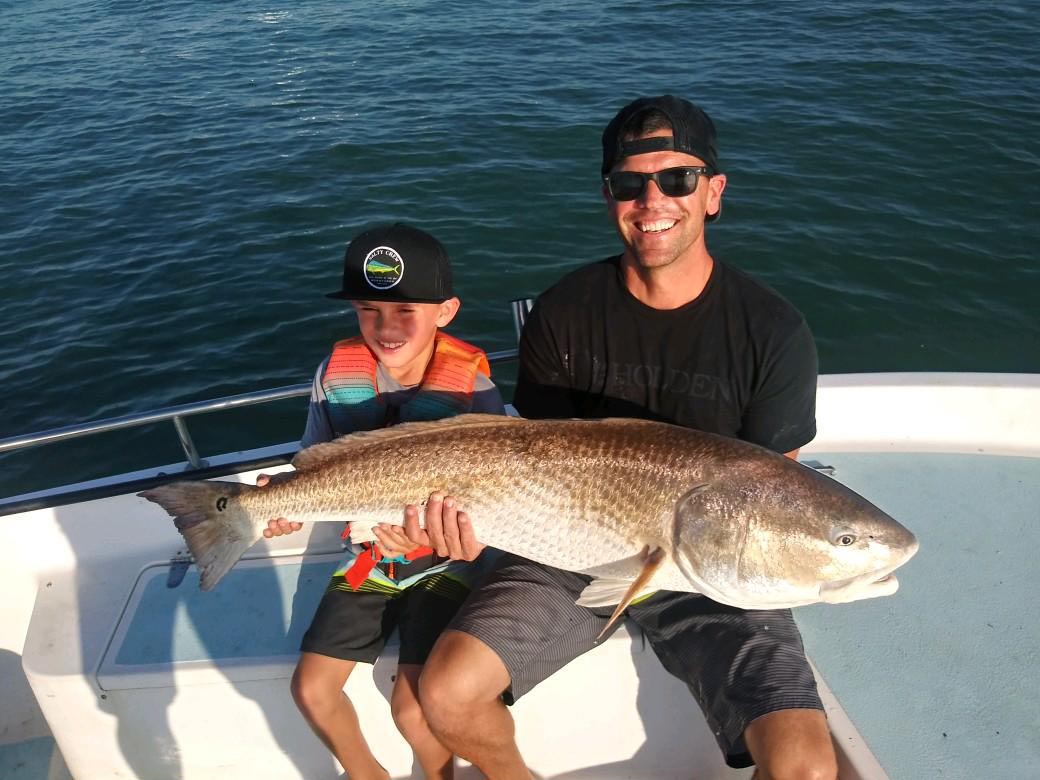 Nolan (age 9) and Tommy Smyth with a 43.6″ red drum that fell for a mullet minnow. They were fishing with Capt. Jamie Rushing, of Seagate Charters.

Arlen, of Intracoastal Angler, reports that shallow water anglers having been doing well with red drum on the flats behind Masonboro, Figure 8, and Lea Island.

Early morning anglers are beginning to find more trout in the creeks and inlets, with the lower Cape Fear being the best for the specks.

Dock fishing along the waterway has continued to produce good numbers of red and black drum. The mid- to lower-river has been the best place for targeting inshore flounder. Carolina-rigged finger mullet and Gulp soft plastics will be the best bet.

In the ocean, the nearshore wrecks and structure have been holding large numbers of 40+” red drum, and soon they will begin to appear at the Masonboro jetties. Large bottom rigs, rigged with live or cut mullet, have been working the best for these citation-sized reds.

The spanish bite has turned back on, and nearshore flounder fishing has remained hot. Carolina-rigged finger mullet and jigging 2 oz bucktails have been the top producers for the ocean flounder.

Trolling for kings has been the best in the 20-30 mile range, with a few stray dolphin being caught as well. Slow trolling menhaden and small ballyhoo has worked the best for the kings and dolphin.

Bottom fishermen have been connecting with a good amount of gag grouper in the same range. Sardines have worked the best.

Trolling in the Gulf Stream is really picking up, with anglers finding multiple wahoos, sailfish, and blackfin tuna. The best of the wahoo fishing has been from the 300 line, south to the Nipple, with a few fish coming from the Steeples. 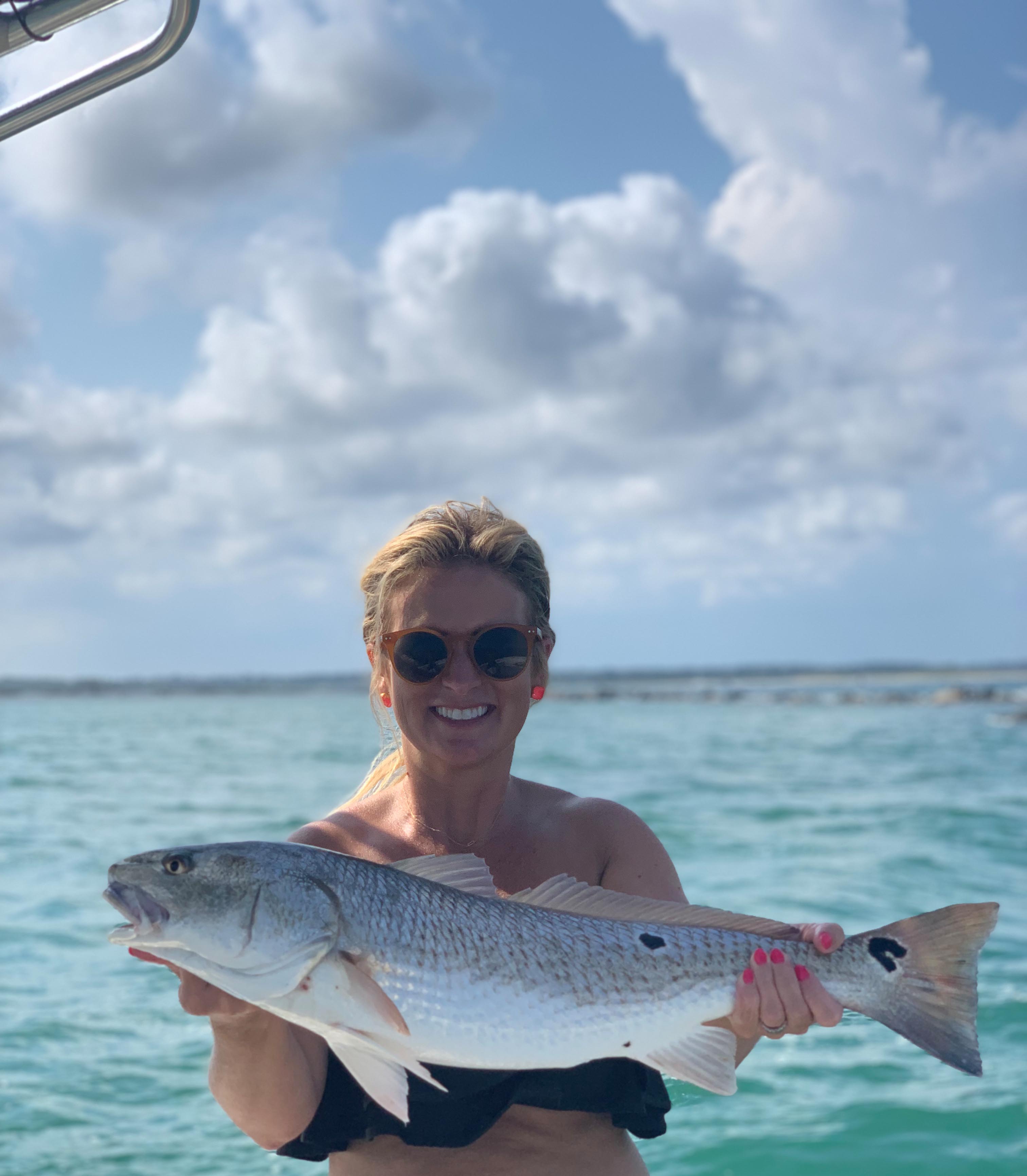 Elisha Smith, from Wilmington, NC, with a 26″ red drum caught at the Masonboro jetties using live finger mullet. She was fishing with her husband, Jonathon Smith.

Jamie, of Seagate Charters, reports that flounder action continues to be red hot on the nearshore reefs and live bottom areas. Most of the flatfish have been taken on live finger mullet. Citation-sized red drum have come in from the same areas in the ocean and on the same baits.

Spanish mackerel fishing has picked up, and there have been many casting opportunities to surface feeding fish (look for the birds) with Blue Water Candy Thingamajigs, as well as trolling success while using the traditional Clarkspoon/planer combinations.

Inshore red drum fishing has been decent, but anglers should expect the redfish action to only get better as the larger fish start moving in to spawn at area inlets.

Some speckled trout have been caught on live mullet, but there has also been a good topwater bite. Xcaliburs, Spooks, and Rapala Skitter Walks will all do the trick.

Trevor, of ProFishNC Charters, reports that inshore fishing is on fire right now. Live mullet and menhaden have been the key for red drum under and around deep water docks.

Off the beach, big (well over-slot) drum are showing up on the nearshore wrecks, and the best tactic has been any fresh cut larger pinfish (tail off/top fin off).

Most of the ocean flounder that are being caught are keepers, and they have been brought in by fishing the bottom in 30-50’ of water. Live baits or bucktails with a 4” soft plastic tipped with any ProCure sent will bring up the flatties.

Good numbers of barracuda, king mackerel, big spanish mackerel, and cobia are being caught within 10-15 miles.

Rick, of Living Waters Guide Service, reports that the best bite has been on the nearshore bottoms, where gags, grunts, and black sea bass are being caught in the 85-100’ range. Squid and cigar minnows have been the top baits to use for all the bottom dwellers.

Trolling with live menhaden in the same areas should find a king or two.

At the end of the pier, anglers are picking up spanish on Gotcha plugs, and the king bite has been improved.