Matt, of Tex’s Tackle, reports most of the redfish are being caught around docks in the waterway, with some of the reds also staying in the marshes behind the islands. You can’t go wrong with cut bait or live mullet this time of year, and topwater plugs and Z-Man soft plastics also have a time and place.

More keeper flounder are being caught inshore, and live bait and Gulp are accounting for most of the fish. The flounder can be found near the inlets and in the creeks on the mainland side. It usually takes some structure and current to find better numbers of flounder inshore, though.

The sheepshead and black drum fishing has been good around bridges, docks, and oyster bars; fiddler crabs, sand fleas, and shrimp are the best baits.

In the surf, there has been action with bluefish, pompano, spanish, croaker, black drum, red drum, and flounder. The fishing during the summer is often better during the cooler times of day or at night.

Spanish mackerel fishing has been hit or miss at the nearshore wrecks and ledges, depending on the wind and tide. Anglers have also been catching blues, kings, and a few false albacore in the same areas. Trolling with Yo-Zuri deep divers and Clarkspoons with planers has been working best.

The nearshore bottom fishing has been strong lately, including citation-sized flounder, gray trout, and some big drum. The preferred tactic is a bucktail tipped with a Gulp or with a live mullet or menhaden. You still have a shot at a cobia, too, especially close to the inlets or around live bottoms and artificial reefs near the beach.

There’s been some decent fishing for gaffer mahi in the 15-30 mile range. Downsized ballyhoo rigs and trolled squid have been the most consistent producing baits.

King mackerel are being caught in decent numbers at structure and ledges throughout the area. The kings are being caught from the beach out to the 30 mile range. Ballyhoo and cigar minnows, Drone spoons, bigger Clarkspoons, and live bait will all produce.

The gag grouper bite has been strong starting in about 80’, along with beeliners, pinkies, and grunts. The reds and scamps can be found further offshore, as well as good numbers of triggerfish.

Successful Gulf Stream trolling has been heavily dependent on finding temperature breaks and weed lines. Also, there is plenty of opportunity for bottom fishing and jigging for grouper, amberjacks, triggerfish, and a variety of snapper out near the break. 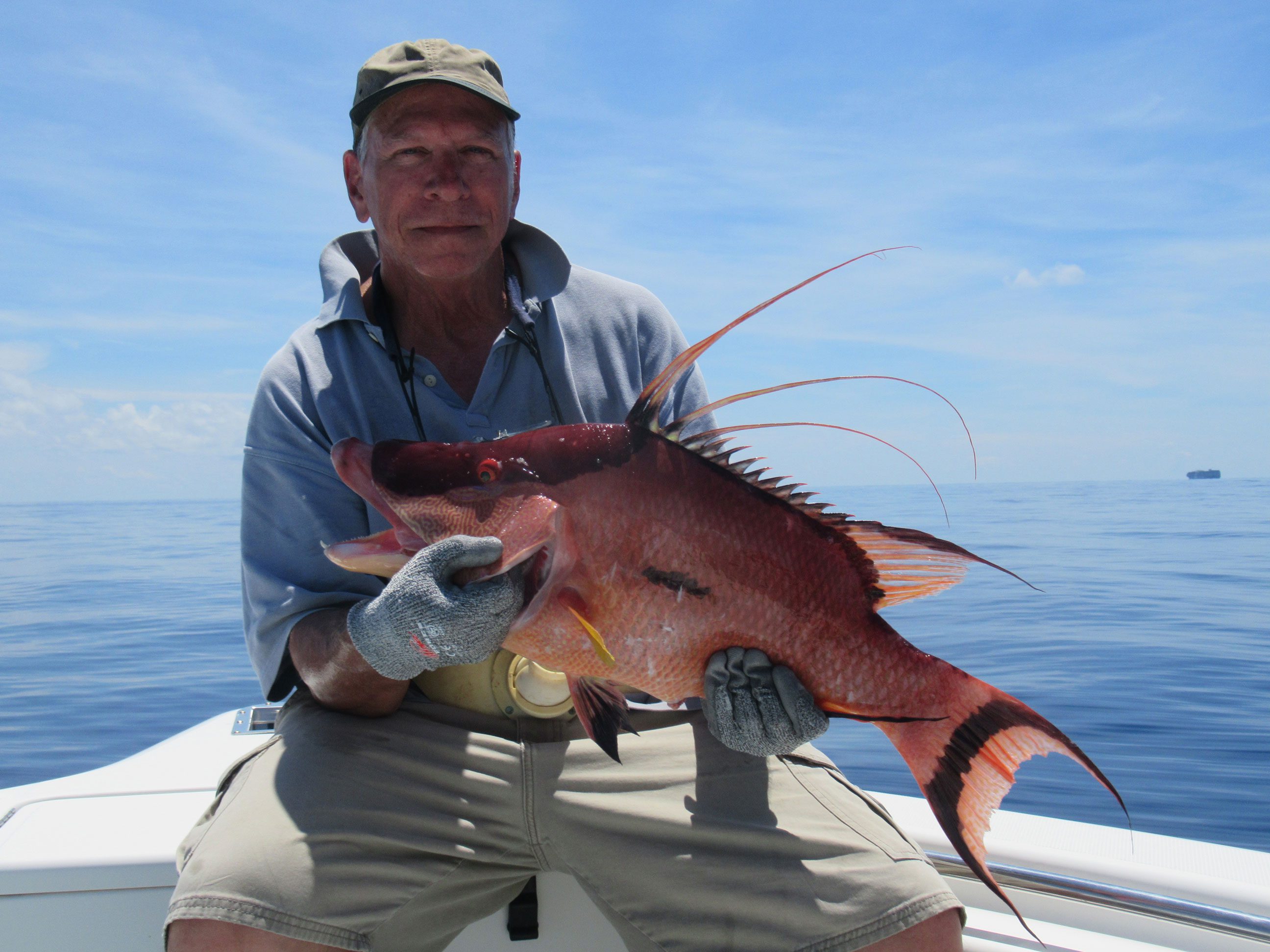 Lauren Harabin with a mahi she caught on a skirted ballyhoo rig while fishing at the 23 Mile Rock.

Arlen, of Intracoastal Angler, reports that red drum are being caught throughout the waterway flats and creeks from behind Masonboro to Richs Inlet, mainly on soft jerk baits and topwater lures.

Anglers fishing with cut baits and shrimp along docks are finding good catches of black and red drum.

Flounder fishing has improved, with a higher ratio of keepers coming from behind Masonboro and Mason’s inlets, where live minnows on Carolina rigs are producing the best results.

Sheepshead fishing has been very strong in Snow’s Cut and along waterway bridge pilings, primarily on live fiddler crabs and sand fleas.

While the spanish mackerel fishing has been hit or miss, larger spanish have been coming from the nearshore reefs on both spoons and live menhaden. Flounder fishing the same reefs has been red hot, where bucktail/Gulp combos have been consistently producing citation-sized fish.

Cobia have been coming from the reefs and wrecks as well, with the most reported from 10 Mile Boxcars and the Schoolhouse.

Anglers trolling ballyhoo and squid in the 15-20 mile range have reported good mixed catches of kings and mahi, along with a few stray sailfish encounters.

Grouper fishing has been very good, with the best gag action coming in 70-80’ on sardines and live pinfish. Scamp grouper, along with triggerfish, have been biting in the 120’ range, mainly northeast of Frying Pan Tower, and anglers fishing live bait along the tower legs have reported good catches of African pompano and amberjacks.

While the dolphin bite has slowed and scattered a bit, decent Gulf Stream action for billfish was reported. Several sailfish, along with a few blue marlin, have been coming from offshore of the Same Ole, with other billfish reported around the Swansboro Hole in 100 fathoms.

Jamie, of Seagate Charters, reports that king and spanish mackerel are biting up and down area beaches. Clarkspoons are working best, as well as frozen baits on Blue Water Candy dead bait rigs.

Flounder are biting at nearshore reefs and live bottom areas, and bucktails from Sea Striker tipped with Z-Man plastics are producing.

Red drum are biting in nearshore waters over structure, as well as in the inshore creeks. Cut and live baits have produced the most bites.

Trevor, with ProFishNC Charters, reports that flounder and red drum fishing is on fire right now, with finger mullet producing the most bites. Most of the fish have been hanging around inlet mouths and estuary docks.

King mackerel are chewing hard between 3-18 miles out.

Mahi are 18-30 miles out, and they’re chewing hard on chuggers and squid chains.

The bait is unusually scarce this year, as mullet and menhaden continue to be hard to find.

Rick, of Living Waters Guide Service, reports that offshore fishing has remained fantastic over the last few weeks, including mahi, sailfish, and marlin. The Steeples and the areas past the Same Ole have been holding a majority of the fish.

Bottom fishing has been good, and the deeper you go, the more species you’ll find. Depths of 100’ or more have been producing scamps, reds, gags, grunts, pinkies, beeliners, and triggers.

In addition, light lining has been great for king mackerel and the occasional mahi.

Gabe, of Johnnie Mercers Pier, reports that flounder, along with an occasional black drum, are biting fresh shrimp.