The vote has come in, and flounder is anticipated to be closed by proclamation around September 4. The history of North Carolina fisheries management has taught us that nothing is definite until it’s definite, but there seems to be no last minute pardon or stay of execution coming—recreational anglers need to head out Labor Day weekend to try and pull up their last flounder catches of 2019 (and well into 2020).

The vote to close came in the Friday morning that Fisherman’s Post was setting up registration for its Southport Inshore Challenge, an annual event where local anglers seek out two big flounder to bring to the scales. We watched on Saturday as anglers brought their fish to the scales, and only a few southern flounder came in, the species of flounder that is most in trouble in North Carolina waters.

Not to take anything away from Team Parker’s win, but not long ago the thought of winning a Southport-area flounder tournament with a two-fish aggregate of 11.83 lbs. would have been preposterous. In the past, a single fish in the double-digits, or at least a near double-digit fish, would have been needed to win a one-flounder leaderboard tournament in just any part of southeastern NC.

Here are some other notes from our recent flounder tournament. Most of the fish we saw in Southport were summer flounder, and then some southern and gulf came in, too, and once again a good percentage of teams making the leaderboard had found their fish off the beach and not in inshore waters. 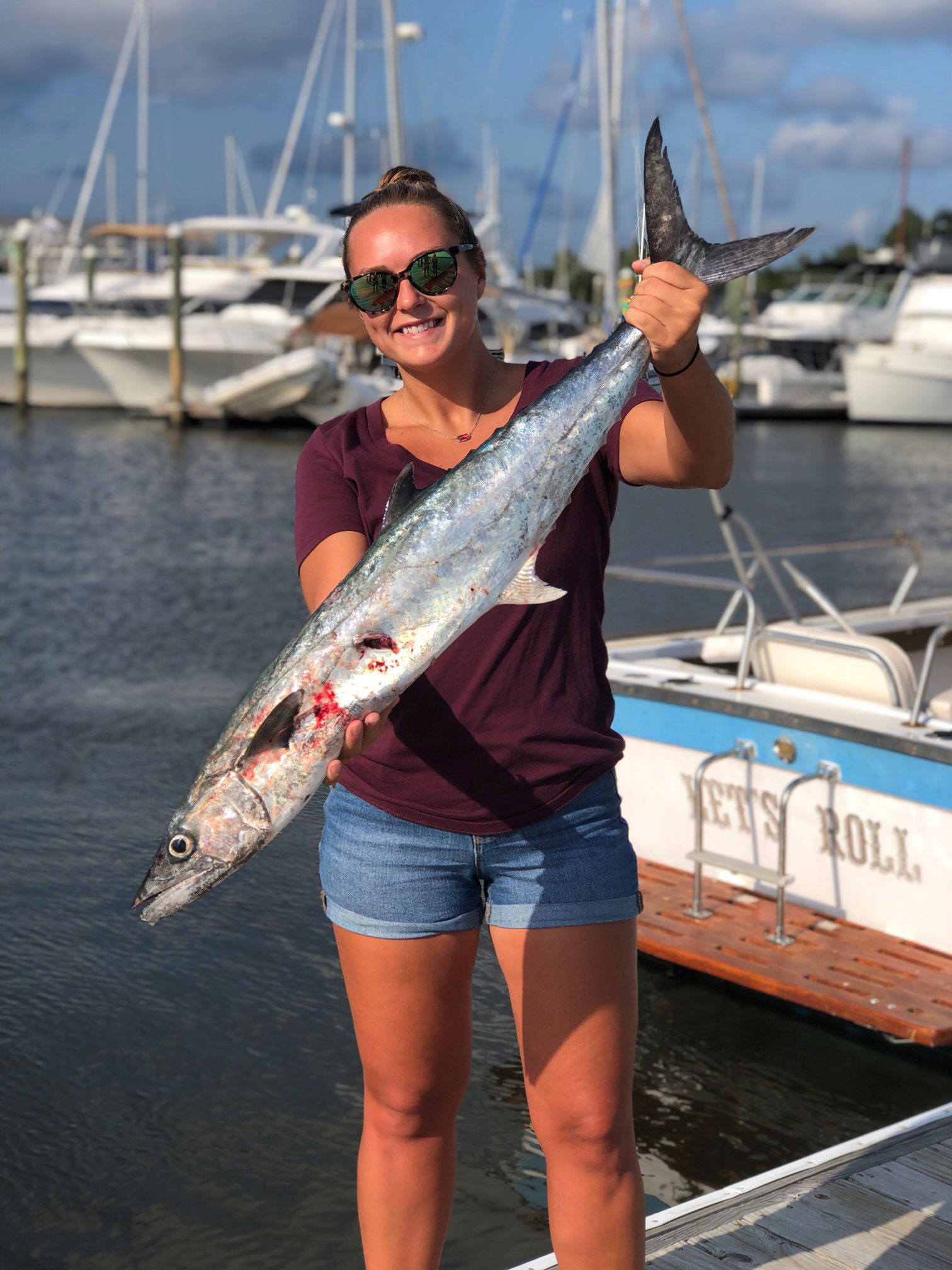 Katelyn Millis, Media/Events Manager of Fisherman’s Post, with her first “real” king mackerel. The king was caught on a light line while bottom fishing with Capt. Ryan Jordan of Fugitive Charters out of Southport.

Discussions in Southport of the flounder closure were, as predicted, very mixed. Some were angry, and some were sad. Some agreed with the measures being taken, but more did not agree. Some wanted to know why they didn’t increase the minimum size limit or reduce the bag limit, rather than an absolute closure. Others wanted to be able to keep ocean flounder, or at least be able to keep the summer and gulf that aren’t in the same bad position as southern.

In anticipation of the flounder closure being passed in late August, Fisherman’s Post fit in some flounder trips this summer, but I now focus Tidelines on a tradition that we participate in each year to celebrate the end of summer—an annual bottom fishing trip out of Southport on the charter boat “Fugitive” with Capt. Ryan Jordan.

The Fish Post crew had a somewhat bumpy ride out to southwest of the Tower. This was Katelyn and Rosa’s first full-day of offshore bottom fishing, and they each had their highlights to help make the day a memory.

Rosa may have fallen asleep and then fallen off of the bench on the ride out, but later in the day, she set a black sea bass record on the “Fugitive,” bringing up a 21” sea bass, besting the previous record of 20.5”.

Katelyn’s highlight reel included catching her first amberjack, her first “real” king mackerel (in her words, she had never caught a king before that wouldn’t be mistaken for a spanish), and her first American red. Katelyn was also the one that, as we were pulling away from our first drop zone, called out about seeing fish in the water column. Those fish turned out to be mahi, and thanks to her, the crew enjoyed some bailing action to help fill up the cooler.

John, Rocky, and I did our part to bring up keeper sea bass, beeliners, an odd grouper or two (red hind and graysby), but we did little in regards to a highlight reel. Our mate, though…

This is Deontae McDaniel’s first summer working on the “Fugitive.” He just graduated high school, and I think, as young people do, he had gotten a little too happy the night before. Quickly into our first drop while dehooking an American red for Katelyn, the fish regurgitated its recent meal, and parts of that regurgitation landed on Deontae’s face.

As stated, Deontae is a new mate, and he is getting better every day at the typical mate duties of untangling lines, taking fish off of the hooks, keeping a count of fish going in the box, making sure the fish stay iced, etc.; however, for me, he will forever be the first mate that threw up overboard while we were fishing. 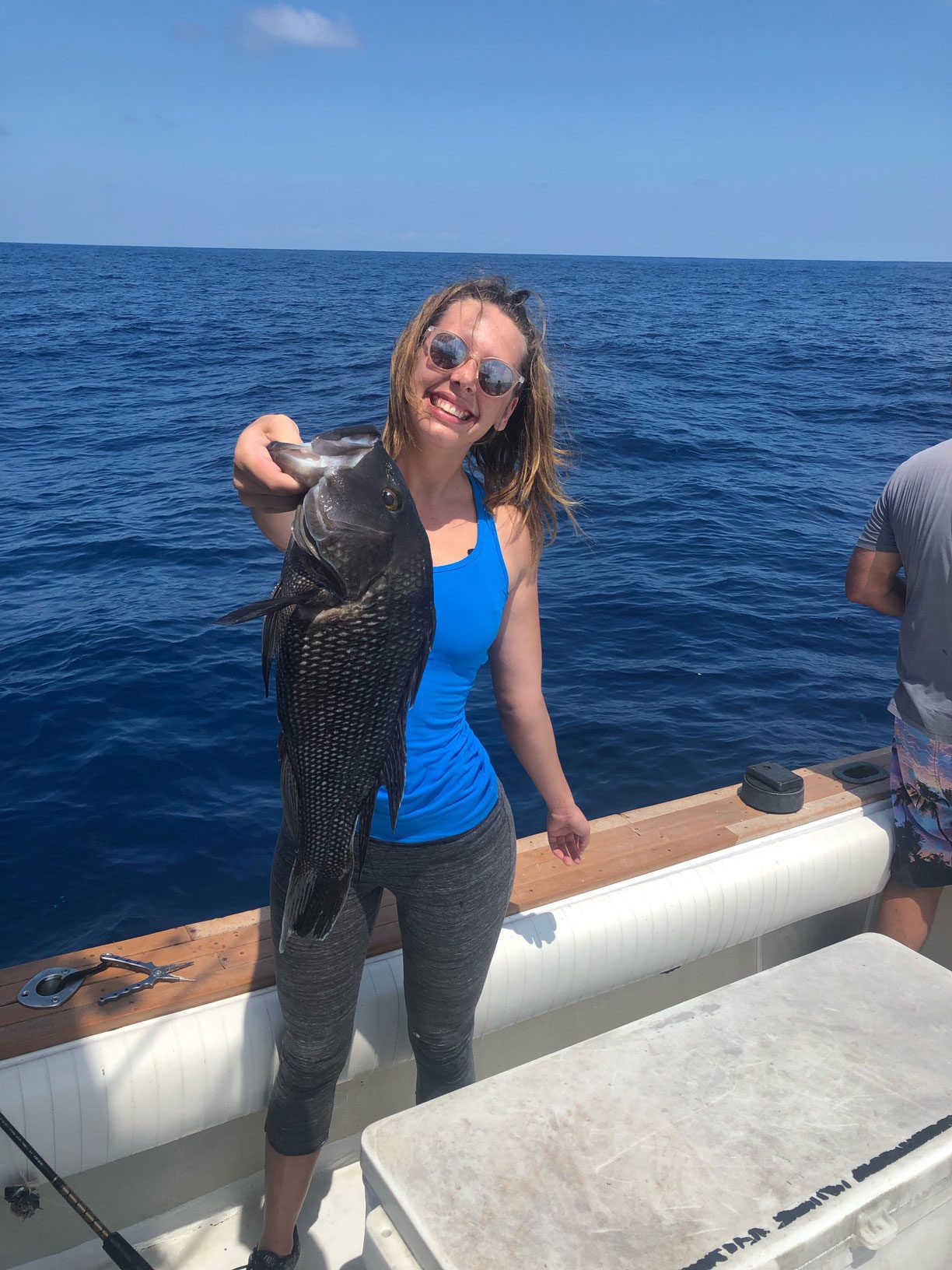 Rosa Bestmann, Sales Manager of Fisherman’s Post, with the new record sea bass for the charter boat Fugitive. The fish measured 21″ and was caught southwest of the Tower while fishing with Capt. Ryan Jordan.

Deontae getting sick isn’t part of Fugitive’s marketing plan, so please focus on Capt. Ryan Jordan’s ability to send clients home with coolers full of tasty bottom fish, or you can book him for a half day spanish trip or a nearshore king trip. He fishes year-round out of Southport Harbour Village Marina, and you can find out more information about Ryan by visiting www.fugitivecharters.com or by calling (910) 933-4242.

Those who know Deontae, please treat him with the respect he deserves (yes, I’m actually saying to make fun of him), and to all of us, please continue to pay attention to all of the flounder news coming out now and in the future about the status of arguably our most popular fishery in North Carolina. We all want the same thing—to be able to go out and catch a keeper (or two).