There were 204 boats churning the waters off of Ocean Isle Beach the weekend of October 25-27 in Captain Brant’s 2019 Fall Brawl King Classic. Being a captain’s choice tournament, teams could choose to fish on one of two open fishing days. The majority of the boats (183 teams) chose to fish on Saturday, and they saw slower winds and calmer seas than the remaining 21 teams that fished Sunday.

The first place fish, tipping the scales at 37.8 lbs., gave Capt. Mark Coley and the crew of Team “Hot Hooks,” from Sunset Beach, NC, the win by just barely outweighing second place by 0.15 lbs. Caught in the mouth of the Cape Fear River on a single naked pogie, the big king came as a bit of a surprise to the team of five.

As they were running towards the Cape Fear River on Saturday morning to get new bait (Coley wasn’t satisfied with the bait pinned the day before), the boat spun a hub. While they were bobbing about, deciding what to do, Coley saw a king breech close to the boat, so all lines hit the water.

In just a few minutes, the “red-headed, sandpaper feeling” pogie that was sitting on a short line near the prop got hit hard. Crew member Brian Walker grabbed the rod as the king took a run under the boat, around the bow, and back again. With Coley blinding the fish with propwash, Walker finagled the fish to the surface.

After a failed gaff attempt that caught only skin, Coley reached down and hoisted the fish onboard by the caudal fin. The team took the rest of the day to return to the scales on just one motor. 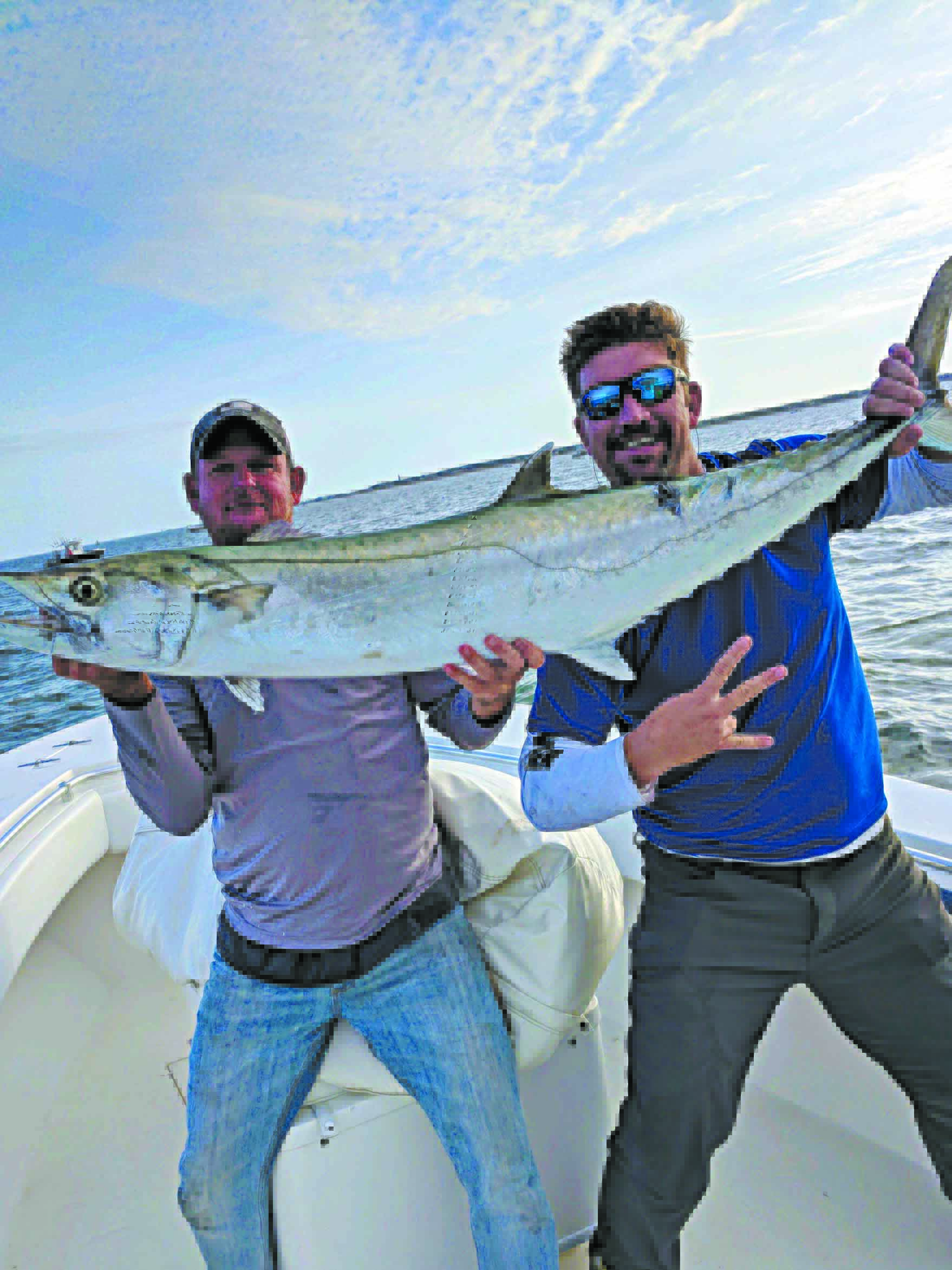 Mark Coley and Brian Walker with their winning king mackerel in the Fall Brawl. Not pictured but also onboard are crew members Matt Walker, Ty Walker, and Caison Coley. They caught the 37.8 lb. king on a live pogie in the propwash.

Just barely missing first place but falling into second was the 37.65 pounder reeled in by the two man team “Hoo Dat,” out of Marshville, NC. Normally a four-man operation, this father and son duo ran the tournament short-staffed, as one crew member called in sick the day of and their junior angler had a football game.

Tony and Ron Alexander started trolling out of Carolina Beach Inlet on Sunday morning with single pogies. The first bite of the day turned out to be their big fish. Ron grabbed the rod as the fish smoked off, while Tony worked to reel in their other lines. By the time they turned on the fish, Ron had only a quarter of spool left.

They chased the king down and slowly worked it up to the surface, where Tony cleanly gaffed it. The pair continued to fish for several hours, but they only caught a few smaller fish before heading back to weigh-in.

Coming in third place with a king less than a pound lighter than the one that took second was Capt. Shane Moore and the crew of “Clear Cut,” from Nakina, NC. Early in the morning the team boated an eighteen pounder, giving them a good start to their day and motivation to fish for a bigger king. While trolling around North Inlet, Georgetown, they got a good bite and began working that fish in. While fighting it, their long line baited with two naked pogies, which they had left out, got smoked. After pulling in the first fish, a solid 20-something pounder that was their biggest yet, they turned their attention to the long line fish. The second king put up an extended fight, but ended up being the team’s money winner.