The 9th annual North Carolina Trooper’s Association Saltwater Challenge is an offshore/inshore event based out of Morehead City, NC. With over $14,000 raised this year for the NC State Troopers Caisson Unit and NC Highway Patrol, this non-profit event is a fantastic way for the community to support local law enforcement.

With two separate divisions, anglers who enjoy inshore fishing and those who enjoy offshore fishing both found their element. The tournament was originally supposed to be a two-day captain’s choice event, but due to unfavorable weather, fishing was canceled for Sunday and all anglers fished Saturday, October 19. A total of 72 teams participated, with 60 teams targeting king mackerel and 12 teams fishing for trout.

The trout anglers this year had tremendous luck pulling in sizeable fish. The trout leaderboard was based on an aggregate weight of each team’s heaviest three fish. Mike Willis, who runs Shallow Minded Charters out of Morehead City, with his friends Ryan and Ross, won the first place prize with their aggregate fish weight of 9.62 lbs.

The team had a lucky spot picked out that they pre-fished in the days leading up to the tournament, and that’s where they spent the entire Saturday fishing. In the early morning on fishing day, the weather was foggy, windy, and cool. “Real trout-y conditions,” as Willis called it. “We knew the night before it’d be a good day.”

The first half hour of fishing was the best, as the team pulled up fish after fish, all of good size. Ross (Ryan’s father) is the angler who caught the team’s biggest fish, and he was using Z-Man scented jerk shads. “It fought like it was bigger,” Willis said.

The whole day the team reeled in trout in the three-pound class. When the tide changed, the fish were less abundant, but the team still reeled in a couple fish every hour until heading back to the Jaycee Park docks. 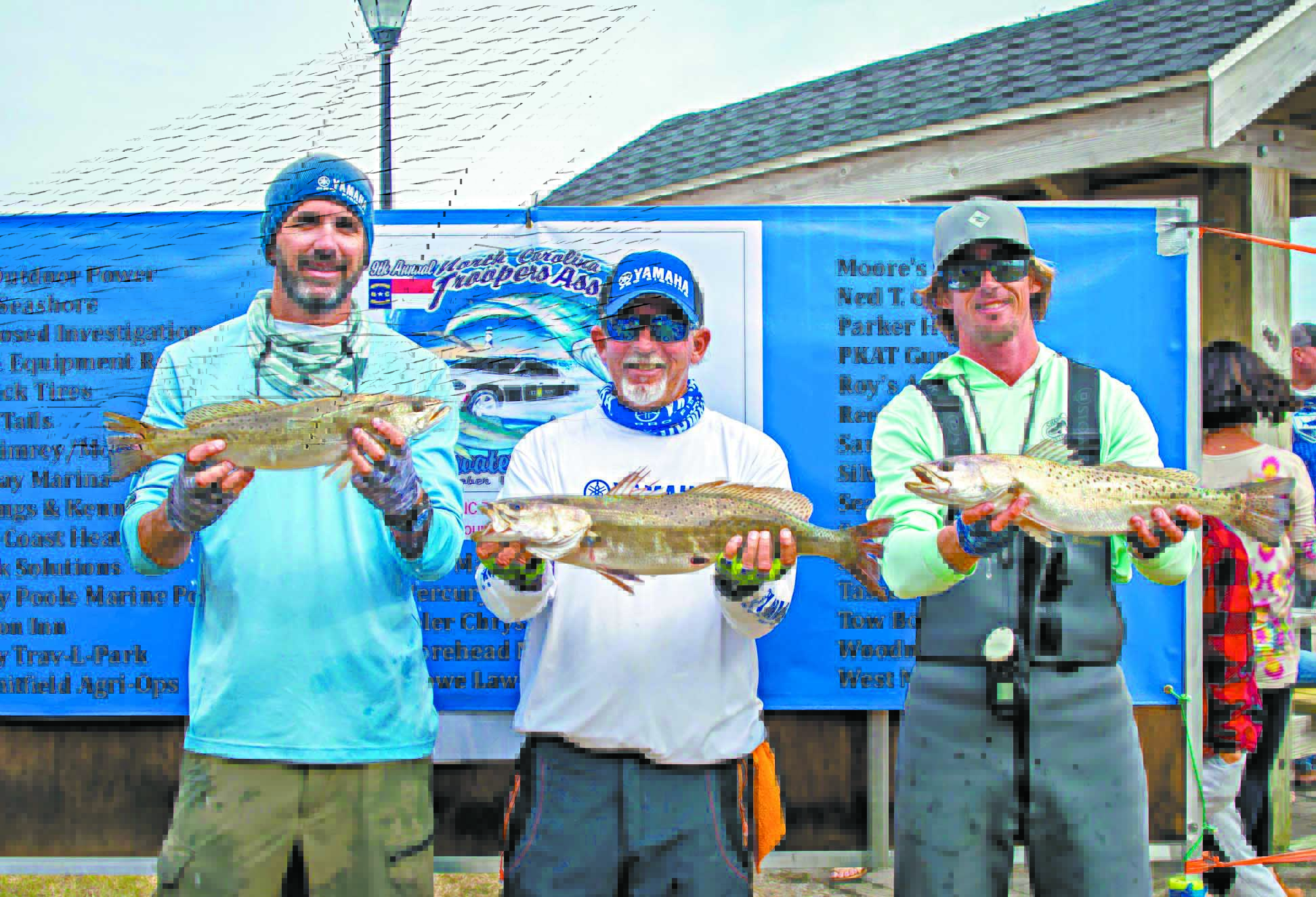 Team Shallow Minded, comprised of Mike Willis and Ryan and Ross, took top honors in the Inshore Division of the NC Trooper’s Assoc. Saltwater Challenge with a three-trout aggregate weight of 9.62 lbs.

Coming in second place with an aggregate fish weight of 7.54 lbs. was Jason Yates from boat “Triton 20.” Third place was claimed by Tommy Emory of boat “Songlines Too” and his aggregate weight of 6.54 lbs.

The king mackerel tournament brought out the majority of tournament anglers at this year’s Saltwater Challenge. The leaderboard for this division was determined by each team’s single largest king mackerel. 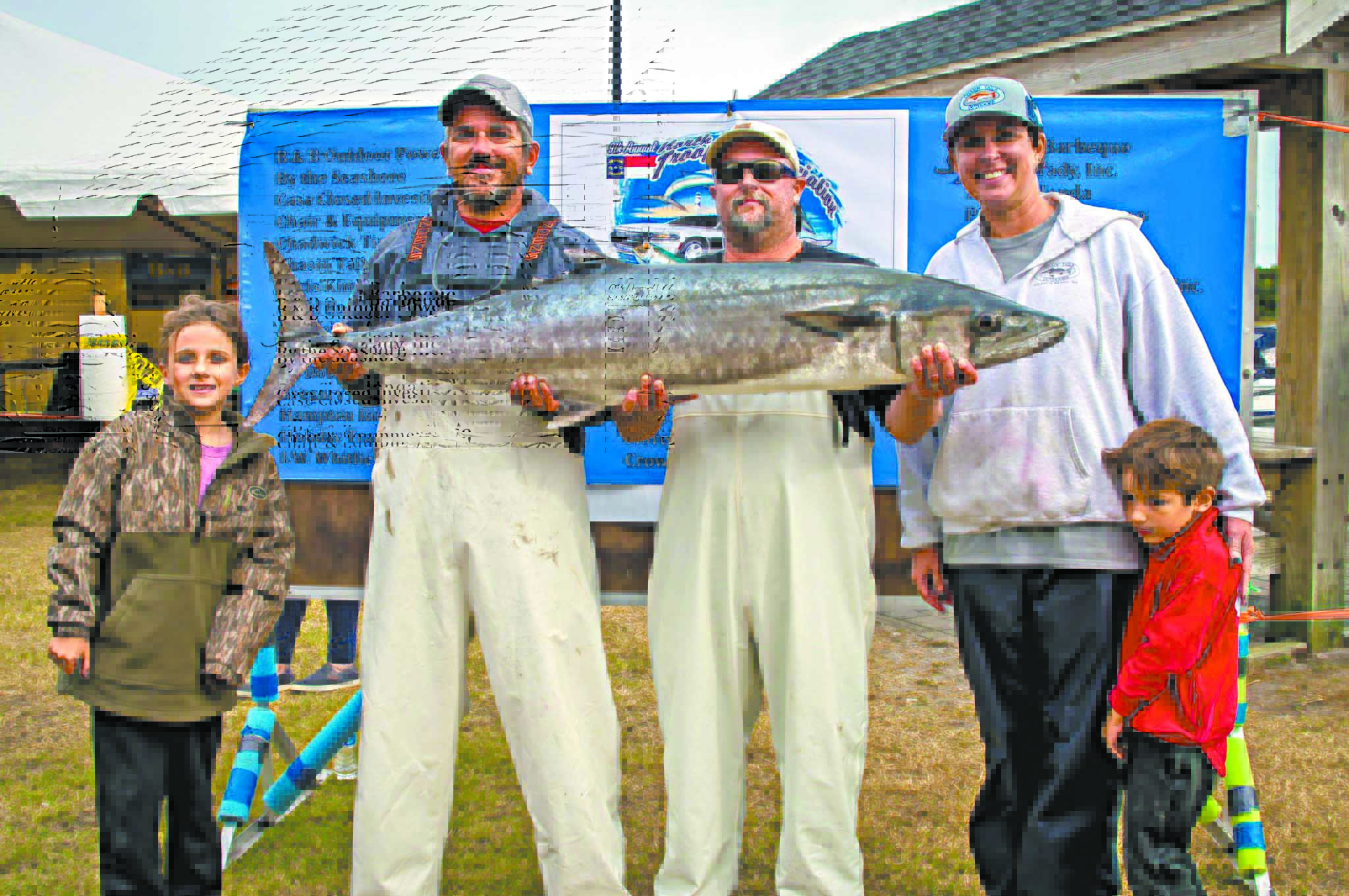 Team “Fish Ann” took home the first place prize with their whopper of a king tipping the scales at 53.5 lbs. Second place was claimed by Philip Munden from boat “Gone Again” with a very sizeable fish weighing in at 40.46 lbs. Third place went to David Moore with boat “Sheet with it, Rock with it” and their king weighing 35.36 lbs.

The NC Trooper’s Caisson Unit assists families of fallen servicemen and women by providing services at funerals, such as the horse-drawn burial and 21-gun-salute. This event and the proceeds raised wouldn’t be possible without generous local and statewide sponsors.

For more information on this event and to see a complete leaderboard, visit 1042fish.com or go to the NC Troopers Association Fishing Tournament Facebook page.