Lewis, of Island Tackle and Hardware, reports that surf anglers have been seeing a push of speckled trout while fishing around Carolina Beach Inlet, and whiting are holding in deeper holes between the sandbars.

Inshore anglers are finding some great speckled trout and red drum action in the lower Cape Fear River. Mixed in along the bottom are plenty of flounder, especially for anglers targeting areas with shoreline structure.

Bluefish are schooled up just inside the inlets and feeding in deeper marsh channels.

Striped bass are being caught by anglers upriver, but this bite slows a little anytime that rain dirties up the water.

Trips to the Stream are producing wahoo for anglers pulling skirted baits.

Deeper offshore structure has been holding a great class of triggerfish, black sea bass, grouper, and the other bottom species.

As the colder weather settles in, anglers will look to stay on the speckled trout action by targeting deeper channels and yacht basin areas with slow-retrieve offerings.

Red drum can be found anywhere between the surf-zone and areas deep in the marshes (such as Buzzard’s Bay).

If the weather stays mild, whiting will stick around the deeper areas at the mouth of the Cape Fear River most of the winter. Striped bass also tend to school up on deeper ledges and structure in the river around downtown Wilmington. 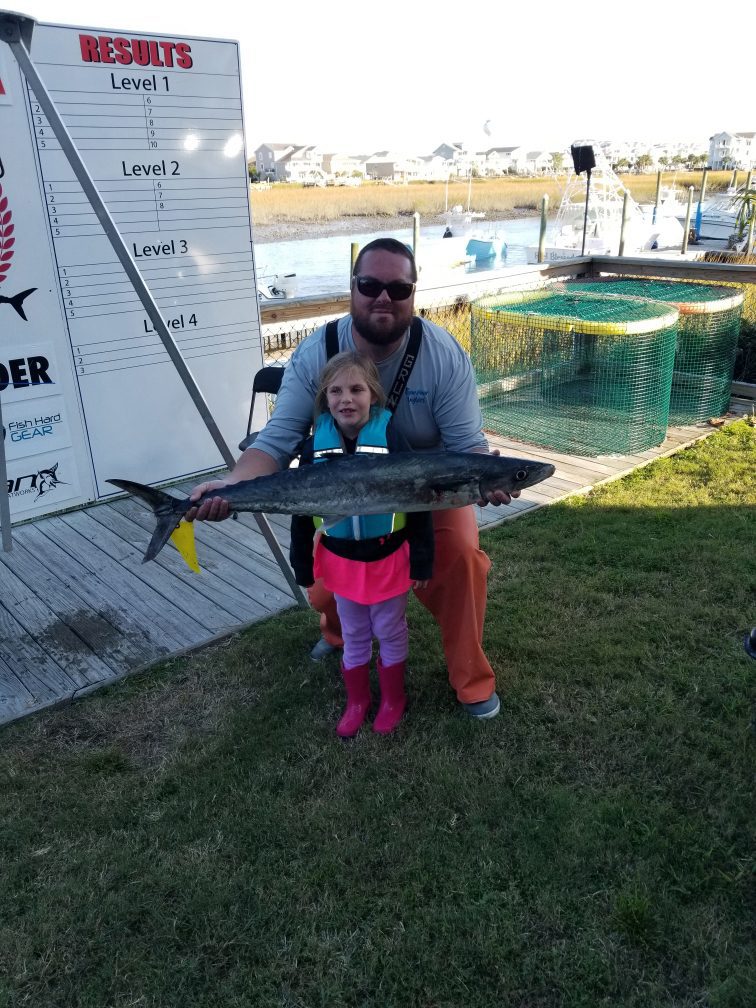 Barry and Claire Bierstedt with a king mackerel that was caught slow trolling live bait 20 miles from the mouth of the Cape Fear River. They were fishing with Capt. Rod Bierstedt of OnMyWay Charters.

Christian, of Seahawk Inshore Fishing Charters, reports that anglers are catching great numbers of black drum while bottom fishing with shrimp on jig heads or Carolina-rigged. Targeting areas that have current and some sort of shell-covered bottom has been key in getting strikes from the plentiful 2-3 lb. class of drum.

Some nice-sized red drum (up to 25”) are scattered as well. Most are being caught while targeting black drum, but also look for action with Gulps or live finger mullet on jig heads. Most of these reds are being caught on the lower tide cycles when shell points and oyster beds are being exposed.

The speckled trout fishing has picked up over the past couple weeks, with water temperatures finally on the move down. MirrOlure MR-17s in darker patterns and Z-Man Trout Tricks have both been very successful in landing a few keepers. These trout are in areas where the current creates rips during the tidal movements, such as creek mouths and grass points.

Wintertime will see a mixed bag of speckled trout, redfish, and black drum. The pattern for targeting these species will be similar to current conditions, but more focus should be put on the smaller feeder creeks, mud banks, and mud flats when searching for schooling fish. Another key is to use scented soft plastics, as these baits tend to be productive for both red drum and trout.

Luke, of Spot On Charters, reports that anglers have been picking away at some good-sized speckled trout (up to 4 lbs.). The water temperatures are still a bit warm and recent rains brought some dirty water into the area, but this could mean that the best fishing is still to come. Targeting these trout with MR-17 MirrOlures and Z-Man soft plastics has been producing most of the strikes.

With schools of bait still around, red drum have stayed in the river. Live shrimp under corks is a successful rig for the redfish.

Though the season is closed, there are quite a few flounder mixed in the daily catches.

Over the winter, anglers will look to take advantage of nice weather days and target trout that remain in the waterways. This fishing does require patience but can be rewarding when finding a larger, active school.

Tommy, of Mungo Fishing Charters, reports that cooling water temperatures have the speckled trout action picking up. Over the next few weeks, look for these trout to be schooled up in deeper holes with a bit of current. If the area begins to see real winter weather, that pattern will push the schools up into mainland creeks and channels.

Black drum fishing has been great, and the bite continues with shrimp being the top bait. A few sheepshead are hitting the same offerings.

Red drum are mixed in, and they’re being caught around areas of structure, such as docks and oyster beds.

Rod, of OnMyWay Fishing Charters, reports that king mackerel fishing has been excellent. The kings are holding in the 5-18 mile range and will stick around as water temperatures hover in the upper 60s.

Some trips to the 15-18 mile range have run across a great temperature break, and when accompanied by a lot of bait around, expect some stray mahi.

Bottom fishing is great for anglers targeting rocks and ledges from 15-25 miles. Grouper and black sea bass have been plentiful and should stay strong through the end of grouper season.

The deeper structure in 25+ miles is loaded with pinkies and beeliners.

Wahoo fishing is picking up in the Gulf Stream. These fish are starting to hold on the temperature break over rocks in the 130-190’ depth range.

As the month goes on and winter settles in, the area does see some significant changes. King mackerel with push further offshore, holding their 68 degree optimal temperature until lower temps push them south.

Grouper season closes at the end of December, but plenty of aggressive black sea bass stay hungry over nearshore structure.

Offshore anglers will continue to catch wahoo in the 150-250’ range, with the numbers being better as cooling temperatures stack the fish up.

Sailfish action has been amazing this year, and anglers shouldn’t be surprised to be landing these billfish until January. 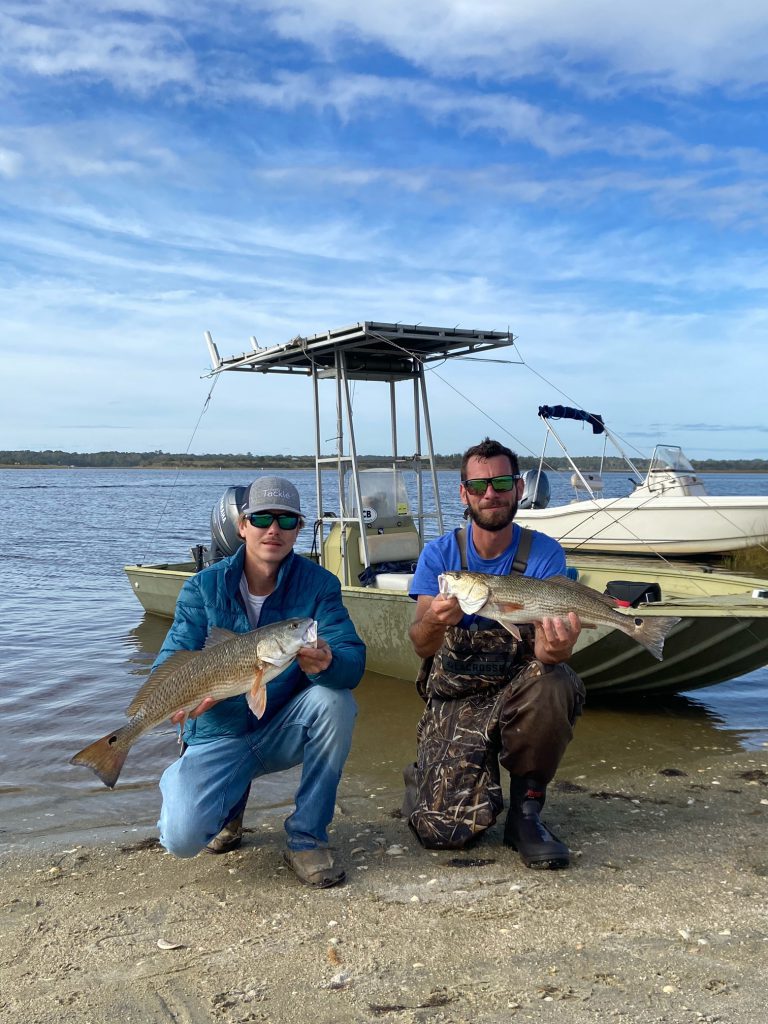 Eric Estes (left) and James Harrisupper with a pair of upper-slot red drum. The fish were caught on frozen finger mullet while fishing near Carolina Beach Inlet.

Anthony, of Kure Beach Pier, reports that anglers are pleased to find schools of spanish mackerel and bluefish still around. Though this action may not last too much longer, it won’t hurt to have a Gotcha plug or casting jig handy over the next few weeks. As the water cools, bluefish will still be caught with bottom-rigged baits.

Shrimp fished on bottom rigs has been producing great action on whiting and good-sized black drum, and some large red drum are being caught with Carolina-rigged cut bait.

Speckled trout are in the area, and they’re hitting shrimp fished closer to the breakers.