Bryan, of Island Tackle and Hardware, reports that surf anglers are catching pompano, sea mullet, and a few black drum while fishing bottom rigs. Some bluefish are coming within casting distance for anglers rigged with glass minnow jigs.

Inshore anglers are reporting good red drum fishing with Carolina-rigged cut baits. Speckled trout fishing has been spotty, but anglers expect a slight water temperature drop to push the trout into their fall pattern. Target the trout in creek mouths, spoil island banks, and channels, and they should respond well to a variety of soft plastics, suspending lures, or live bait.

Trolling spoons along the beach has been producing good numbers of spanish mackerel. King mackerel fishing has been awesome from the beach out to 15 miles. Trolling live and dead baits are getting strikes from good-sized kings (up to 30 lbs.).

There isn’t much news from offshore, with anglers mostly only locating a few wahoo. 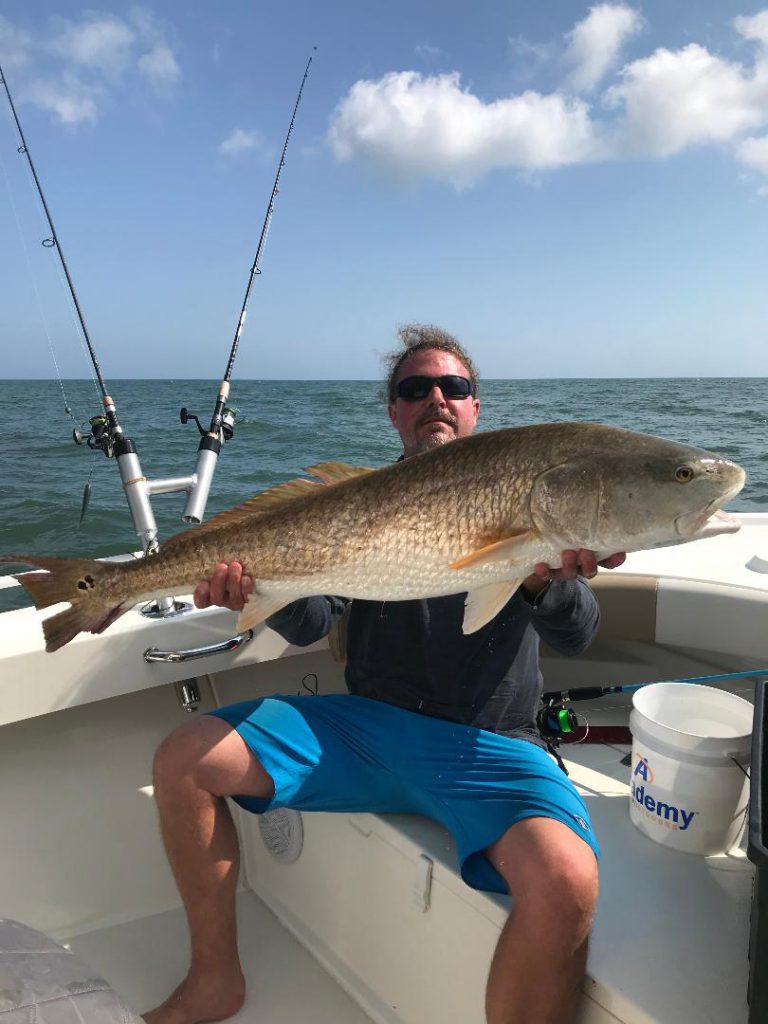 Jonathan Arn, of Sneads Ferry, with a 42” red drum caught on a live finger mullet. He was fishing some nearshore structure off Carolina Beach.

Christian, of Seahawk Inshore Fishing Charters, reports that red drum fishing continues to be great around grass banks in the river. Water temperatures have held good amounts of bait inshore, and the bait is keeping the reds active.

Speckled trout action is beginning to pick up. Most fish are still scattered, but over the next few weeks it will be easier to target the trout as they school up against inshore ledges and oyster beds.

Black drum are mixed in for anglers fishing these deeper holes.

Luke, of Spot On Charters, reports that fishing has been great for slot to yearling-sized red drum. The warm water temperatures have kept much of these good-sized small to medium baitfish active inshore. Underneath the baitfish are the reds and catch and release flounder.

Speckled trout fishing is picking up, with most action being best early in the day due to warmer weather patterns as the sun rises. As the sun warms the water, these trout are dropping down into nearby holes and ledges.

Over the next few weeks, the slightest cooling pattern should fire the trout bite into its wide-open fall run. Anglers will have much success while switching between soft plastics or MirrOlure MR-17s and similar suspending plugs.

Tommy, of Mungo Fishing Charters, reports that good numbers of black drum are holding around docks and oyster beds.

Red drum are in these same areas, with live baits being very productive since the baitfish are still plentiful inshore. A few catch and release flounder are mixed in with the live bait action.

Speckled trout are just about ready to really kick off. Anglers look forward to water cooling down a little more before the trout begin to actively feed through the day.

Just outside the inlets, anglers are finding large schools of spanish mackerel feeding on bait pods pushing into the ocean.

Rod, of OnMyWay Fishing Charters, reports that water temperatures remaining in the 70s is great news moving into fall. Fishing along the beach for spanish mackerel, false albacore, and king mackerel has been on fire.

The spanish mackerel and albacore are hitting casting jigs and spoons fished around bait pods. King mackerel action is red hot from the beaches out to 10 miles. It has not been uncommon to see triple hookups with this 15-35 lb. class of kings. Trolling live menhaden, as well as ballyhoo and cigar minnows on Blue Water Candy dead bait rigs, have all been successful. These nearshore kings look to stick around awhile with water temperatures still up.

The offshore mid-range (from 18-25 miles) has been seeing some great action as well. Recent trips have found some bluewater creeping in close, which has produced the surprise bigeye tuna, blackfin, and wahoo inside of the break. Large king mackerel are also thick in this range. Bottom fishing has been strong in the 18-30 mile range. A mix of jumbo black sea bass, pink snappers, and gag grouper are hitting cut baits or jigs.

Fishing at the break has been hit or miss with good water and bait pushed in, but anglers are still landing large wahoo. Over the next few weeks this wahoo bite should begin producing great numbers as they stack up.

Jeff Brown, from Concord, with a 22″ redfish that fell for cut mullet while fishing the surf at Fort Fisher.

Woody, of Kure Beach Pier, reports that spanish mackerel action has been great, with plenty of large fish (6-9 lbs.) in the mix.

King mackerel are along the beaches and are swiping at live baits fished off the pier’s end.

Scattered bluefish (up to 6.5 lbs.) are being caught on live and cut baits, and bottom rigs with fresh shrimp and sand fleas are producing pompano.