Ryan, of Hatteras Jack, reports that surf anglers are landing a few sea mullet and the occasional puppy drum on the southern beaches.

The coming weeks should see water temperatures rise a little, and surf anglers will then see the first large wave of sea mullet and possibly blow toads in the area. Puppy drum will still be schooled up, and there should be a few more fish from the beaches up towards Oregon Inlet.

With the current cold water temperatures in the area, anglers will find fishing shrimp and cut bait on bottom rigs to be most productive.

Rodanthe Pier will re-open on April 4.

Heather, of Frank and Fran’s, reports that surf fishing has begun to pick up for the season after a slow winter. Most anglers are reporting fish from the southern areas down through Frisco. As the weather gets better, more anglers on the beaches will see an influx of fish activity.

Sea mullet and puppy drum are currently being caught on bottom rigs tipped with shrimp. Areas around Ramps 33 and 34 have been popular.

Blow toads should be showing on the beaches any day with the water temperatures now creeping up. Shrimp is a great bait for them, and using smaller hooks helps with hook-up rates.

Avon Pier will re-open in May. 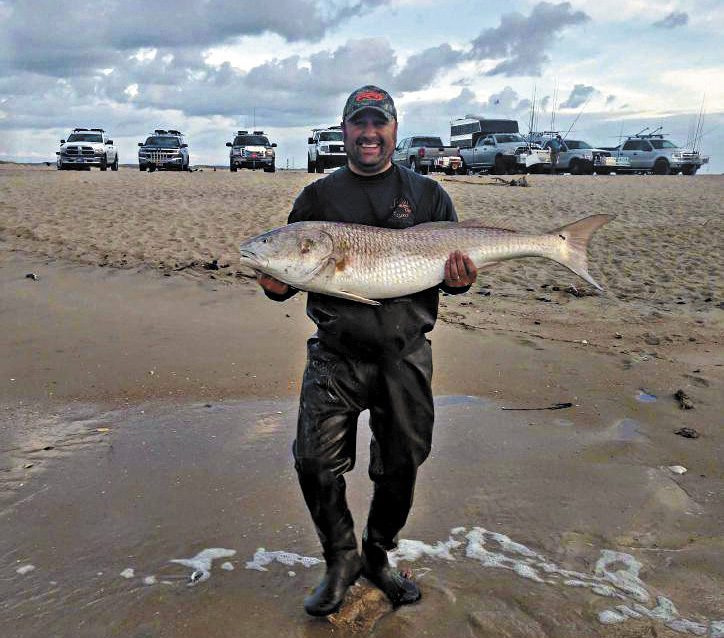 Eric Bregman with an over-slot red drum caught in the Buxton surf on cut bait.

Cameron, of Frisco Tackle, reports that sea mullet are arriving to the area, which many anglers view as the start of spring. Fishing shrimp and Fishbites strips on bottom rigs has been a productive setup.

Puppy drum are scattered on the beaches, and they’re hitting the same bottom-rigged offerings. With cold water temperatures, these fish stay grouped up. Though the schools are scattered, anglers finding the right holes along the beach will be greeted with bites (and the fish feeding more aggressively).

There are blow toads on the southern beaches, and more anglers on the sand in coming weeks should be finding more fish (and bringing more news into the shop).

Lee, of Teach’s Lair, reports that tuna fishing has been picking up as the weather begins to show consistent spring conditions. Both blackfin and yellowfin tuna are hitting skirted ballyhoo pulled near temperature breaks in the Stream. Some anglers have preferred to jig when locating blackfin tuna, but sharks tend to swarm which leads to more bite-offs when jigging versus trolling.

The nearshore bite has been slow except for anglers bottom fishing.

Inshore anglers have been experiencing slow fishing and cold water temperatures. The season is still a couple weeks out from seeing fish push in from the ocean-side and mainland rivers.

Surf anglers are catching large sea mullet on the south end beaches while bottom fishing with shrimp. Nothing has been reported out at the point, but with more anglers hitting the beaches every day, more catches will be announced.

Joey, of Fingeance Sportfishing, reports that fishing is slowly picking up along the beaches, with anglers beginning to see speckled trout and red drum.

Most anglers have had their eyes looking inland towards the great striped bass bite that occurs each spring. These stripers are pushing from the sound into the rivers to spawn, with the Roanoke River being a hot bed of action. Heavier jig heads (1/2 oz.) paired with Z-Man MinnowZ soft plastics have been a great producing setup. The choice of bait color has varied, but most action has been coming from white, pink, and chartreuse.

Jeremy, of Calypso Fishing Charters, reports that blackfin tuna fishing has been good in the area. Trolling has been producing fish, with some days anglers choosing to jig instead. Jigging has also brought sharks, though, but getting the fish in quickly (or just by luck) has helped with catch ratios.

Amberjacks are mixed in, and they’re hitting jigs around these same ledges

False albacore are still schooled up offshore. The albies are feeding on the skirted baits as they follow the warmer waters into the beach.

Alan, of Tradewinds Tackle, reports that anglers are pleased to see a more stable weather pattern and look forward to great spring fishing.

Surf anglers are having success catching puppy drum and bluefish (up to 18”) while casting bait shrimp on bottom rigs.

Nearshore anglers are targeting structure off the beaches for good numbers of keeper black sea bass and triggerfish.

Offshore trips have been finding great bottom fishing while dropping cut baits, and a few trips out to target swordfish are returning with good news.

Anglers look forward to these next few weeks, as the first major wave of fish are on the brink of arriving. Sea mullet and puffers should soon be around in good numbers for anglers with smaller bottom rigs and shrimp.

Larger slot and over-slot red drum will be right behind them, taking shrimp and other cut bait offerings. A few early bigger reds were already caught this past weekend.