John, of Hatteras Jack, reports that puppy drum fishing in the surf has been on fire. Schools of red drum have pushed out of the inlets and are hitting cut baits everywhere along Hatteras Island.

Black drum are being caught in the deeper troughs with shrimp. Most have been throwbacks, but as the water cools, anglers may see better numbers of keepers.

Sea mullet have been dominating the bottom rig fishing, with plenty of close to citation-class fish being caught, and a few pufferfish are mixed in.

Sound-side fishing has begun to slow with bait pushing out of the area. Cut baits and soft plastics along deeper channels should still produce a few trout and puppy drum, though.

Going deep into December, anglers look forward to the speckled trout bite to pick up in the surf. A few small trout are starting to show up, but most of the action is still holding on the northern beaches and hasn’t moved down yet. 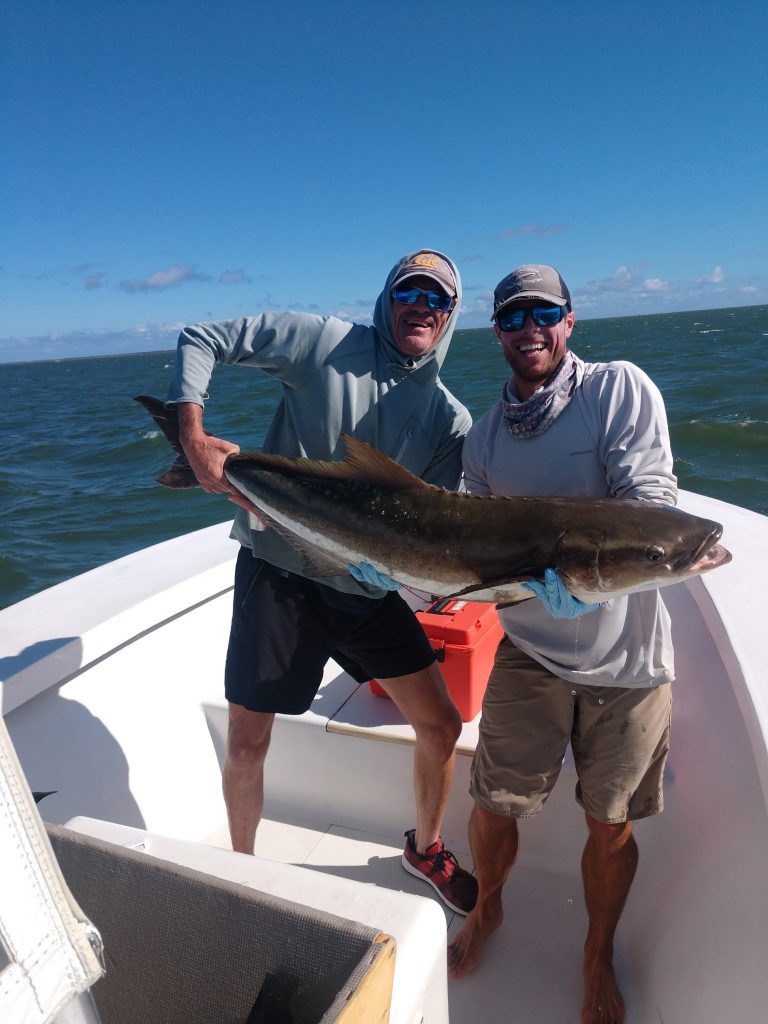 Riley Gallagher and Paul Ruderhauser with a cobia that was caught on cut menhaden injected with ProCure. They were fishing Hatteras Inlet with Capt. Joey Vandyke of Fingeance Charters, and it was the 101 cobia tagged in their NC State research program.

Jim, of Rodanthe Pier, reports that a few bluefish are feeding on cut baits and shrimp around the mid-point of the pier. Black drum and sea mullet are also hitting the shrimp-tipped bottom rigs, and puppy drum are being caught behind the breakers with Carolina-rigged cut mullet.

Heather, of Frank and Fran’s, reports that puppy drum action in the surf has been great for anglers rigged with fresh cut menhaden or mullet.  A few over-slot reds (up to 48”) have hit the same cut bait offerings.

Sheepshead and black drum are feeding on sand fleas in the deeper holes, and bottom rigs are producing good numbers of sea mullet and some blowtoads.

Cameron, of Frisco Tackle, reports that fishing has been a bit spotty for the late fall to winter transition. A few bluefish are being caught on the calmer days with bottom rigs.

Going into the later part of the month, anglers look for one more push of bottom fish from the northern area beaches. Continued mild weather could see bluefish, puppy drum, sea mullet, and (possibly) speckled trout stick around through Christmas.

Hoopdee, of Teach’s Lair, reports that offshore trips have been catching large wahoo and scattered blackfin tuna. Anglers still look for water temperatures to drop more and the fish to school up more as we move further into winter.

King mackerel fishing has been great, with a large class of fish hitting trolled live and dead baits.

Over the next few months, look for the wahoo and blackfin tuna bite to pick up. This offshore action should pair with news of bluefin tuna from more northern areas up around the Point.

Joey, of Fingeance Sportfishing, reports that speckled trout action has been great all fall. With the water cooling down, tactics change slightly as anglers target deeper holes and fish slower to entice strikes.

Slot-sized red drum are plentiful on the flats, with both cut baits and sight-casting being productive.

Over the next few months, anglers will continue to target the reds and trout in the ame locations with the same tactics. Once February rolls around, many look to switch to light tackle and target mainland rivers for shad and, shortly after, striped bass. The Albemarle sound has a legendary fishery for these species, as they actively feed on their spawning run.

Jay, of Bite Me Sportfishing, reports that anglers are having a blast light-lining large king mackerel (up to 44 lbs.). The cooling water temperatures kicked off a great king bite for those slow-trolling live baits.

A few blackfin tuna and wahoo are being caught by trolling skirted baits out towards the break.

Over the next few weeks, anglers hope to stay on the kings until a significant temp drop pushes them off. Turning to blackfin tuna and wahoo will provide action until the spring mahi run.

Jeremy, of Calypso Sportfishing, reports that there have been plenty of large king mackerel (up to 40+ lbs.) in the area. Pulling skirted dead bait rigs are great for targeting these kings holding over rocks and ledges.

Good numbers of blackfin tuna and scattered wahoo have been active over the deeper structures at the break. Over the next few months, both of these species become the main offshore targets. Wahoo in particular are a great wintertime fishery for Hatteras area anglers.

Dolphin are hit or miss, but when anglers find some grass holding, it has been a rewarding class of large bailers. 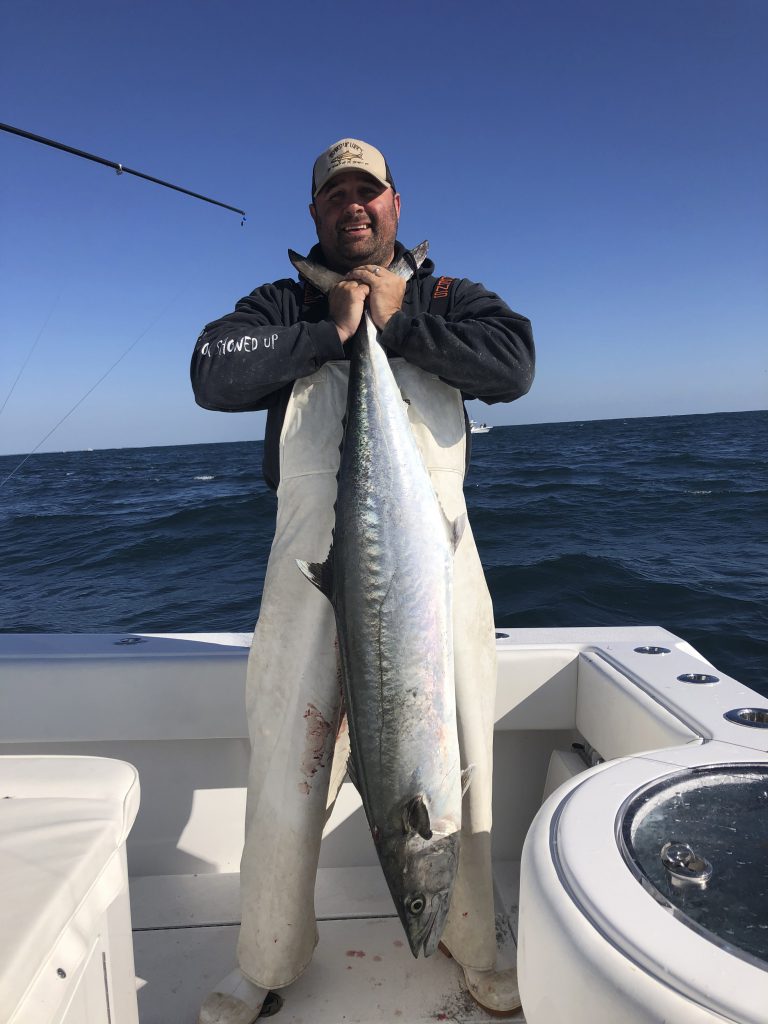 Jessie, of Carolina Girl Sportfishing, reports that king mackerel action has been excellent over the past few weeks. There are some large kings mixed in with blackfin tuna anywhere in the 5-15 mile range striking both live and dead bait rigs. There are no signs of this action slowing down, and anglers anticipate the kings sticking around until the end of December.

Offshore action has been all about wahoo and the tuna species (both blackfins and yellowfins). Wahoo should see a bump up in numbers any day now as a result of some great temperature breaks forming against the cooling nearshore waters.

Bluefin tuna are another possibility each winter in the Outer Banks. Due to the demanding time and tackle, not many anglers strictly target them. A few giant blues are already being spotted and hooked.

Alan, of Tradewinds Tackle, reports that puppy and over-slot red drum action has been great off the beach. Carolina-rigged cut baits have been the top producing setup for both.

Sea mullet and black drum are mixed together in troughs close to the shoreline. Anglers have had success with the classic shrimp on bottom rig combo.

Sound-side anglers are still catching a few speckled trout and red drum, though most of the action has pushed into the surf.

Offshore anglers are catching wahoo and plenty of bottom fish.