Jack, of Hatteras Jack, reports that surf anglers are catching good numbers of red drum. Carolina-rigged cut baits are best for the reds and are also finding a few bluefish bites. Bottom rigs with smaller baits are producing sea mullet.

Sound-side fishing remains strong for anglers kayaking or wading the flats and channels. Red drum are hitting cut baits in both areas.

Speckled trout fishing has been great all year, and now that water temperatures are cooling, we will see the fish school up. Soft plastics under popping corks are great search baits for casting on ledges and grass lines.

Jim, of Rodanthe Pier, reports that anglers fishing cut baits are catching a good amount of red drum (up to 46”).

Scattered bluefish are also feeding on cut mullet, and Carolina-rigged shrimp has been producing black drum (up to 5 lbs.).

Bottom fishing anglers are catching citation-class sea mullet, blow toads, pompano, and a few spot. Fishing baits near the pilings has produced some action from sheepshead. 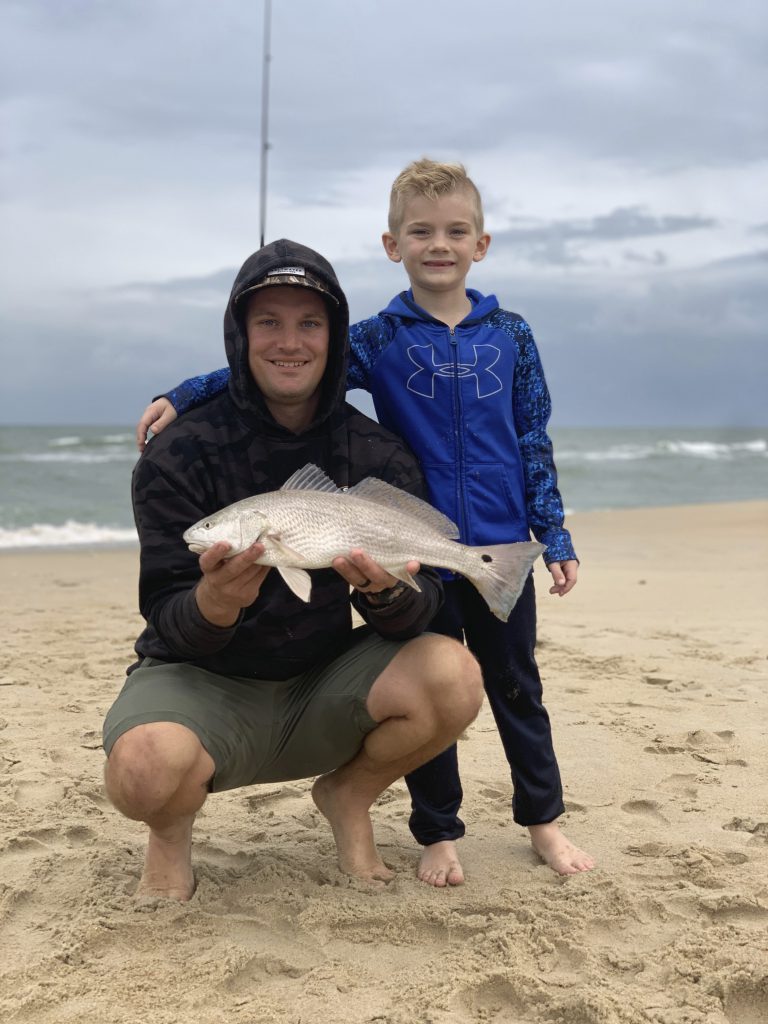 Heather, of Frank and Fran’s, reports that surf anglers have been seeing good numbers of puppy drum (up to 25”). Bottom rigs fished in the wash or channels between sandbars are producing citation sea mullet, blow toads, pompano, and scattered black drum.

Schools of bluefish are pushing near the beach, and they’re striking Stingsilver jigs cast to the frenzied action.

Large sharks are chewing on big cut baits fished at the Point.

Speckled trout are being landed in good numbers throughout the sound. They’re hitting popping corks with soft plastics.

Puppy drum are on these same inshore flats and feeding on cut mullet.

Red drum are also along the beaches, and they’re hitting cut bait.

Bluefish are scattered, with fish being landed on both cut bait and casting jigs.

In the sounds, speckled trout are being caught along grass banks and channels with soft plastics under corks. Red drum are feeding on cut baits fished in both deeper holes and on the flats.

Hoopdee, of Teach’s Lair, reports that blackfin tuna numbers have been great for anglers heading offshore. A few yellowfin are feeding alongside the blackfins.

Some larger wahoo are being caught by anglers pulling high speed rigs and baits under planers. King mackerel numbers have picked up in recent weeks. It has been a good-sized class of kings hitting live and dead baits.

Bluefish are schooled up from the inlets into deeper inshore channels. Casting jigs have been best when thrown at surface-feeding fish.

A few citation-class reds are scattered around, and they’re hitting the same cut baits fished on ledges.

Both gray and speckled trout are around in good numbers. The gray trout have been hitting fresh shrimp and jigs in deep channels, while the specks are preferring shallow grass flats.

Joey, of Fingeance Sportfishing, reports that recent cooling water temperatures paired with cold fronts are firing off the speckled trout action. Targeting these fish with deeper-running Z-Man soft plastics and 1/4 oz. jig heads has been key.

There has been excellent fishing for slot-sized red drum with cut mullet and menhaden, and bluefish are still running through these inshore areas and hitting both cut and artificial baits.

Cobia fishing has been awesome the whole fall, and the baitfish around should keep the fish nearby for a bit longer.

Jay, of Bite Me Sportfishing, reports that good-sized wahoo (up to 41 lbs.) are coming off skirted baits under planers, and blackfin tuna action has been strong for anglers looking to bring home coolers of meat.

Sailfish have been mixed in in very good numbers, with multiple hookups on some trips.

King mackerel are also scattered in the counts, with mostly larger fish being landed.

Jeremy, of Calypso Sportfishing, reports that blackfin tuna fishing has been awesome on the go-to ballyhoo and Sea Witch skirt combo.

Good numbers of schoolie-sized mahi are holding under grass and debris out deep, and scattered yellowfin tuna and wahoo are mixed in with the skirted ballyhoo action.

King mackerel are starting to show up, and anglers look forward to the thrilling live bait action.

Jessie, of Carolina Girl Sportfishing, reports that blackfin tuna fishing has been great. Anglers are thrilled to see some of the best numbers in years, with action scattered from local rock piles out around the Point.

A few large wahoo are mixed in the counts over the past few trips, and it has been worth taking a look around floating debris in the chance of finding some mahi (with water temperatures keeping fish in the area).

King mackerel are showing up for anglers fishing both live and dead baits. Targeting good bottoms holding bait has been key in locating these groups of kings.

Alan, of Tradewinds Tackle, reports that surf fishing has been great, with both puppy drum and some over-slot reds hitting Carolina-rigged cut mullet.

Black drum and scattered sheepshead are being caught by anglers fishing with fresh shrimp.

Bluefish are pushing inside the sandbars to feed, and they’re striking at glass minnow jigs.