Nick, of Chasin’ Tails, reports that speckled trout are holding in all their major fall-time spots. Falling water temperatures have these fish schooled up over deeper structure and hitting MirrOlures and soft plastics. Live bait has also been great when finding shrimp or mud minnows and fishing them under corks.

Slot-sized red drum are holding in similar areas, including along the beachfront to the jetties.

There have been plenty of gray trout and large sea mullet being caught from the port area to the inlet. Bottom rigs with shrimp have been producing action from both species.

Keeping an eye on the surface while around these deeper inshore areas has produced some false albacore pushed inside on the higher tide cycles.

Out along the beaches, false albacore have been the hot bite, with schools being seen from the inlets out to Cape Lookout. Anglers are targeting the surface-feeding schools with flies and small metal casting jigs.

King mackerel fishing continues to be strong in the 15-20 mile range. Most of the kings have been larger (20+ lbs.), but as water temperatures cool, the bite will push off.

Anglers trolling in this same mid-range (15-25 miles) have landed a few scattered wahoo and some blackfin tuna.

Both the wahoo and blackfin tuna dominate the Gulf Stream bite. The bite has been spotty in recent trips, but water temperatures cooling should create a stronger temperature break and congregate the fish.

Over the winter months, look for the inshore bite to be focused in mainland creeks. Speckled trout and red drum can get sluggish, so work twitch baits or soft plastics very slow.

With the commercial season opening shortly, bluefin tuna are another species that could make a showing again this year. These huge tuna will be anywhere from 2-30 miles out and feeding under birds or around whales. Horse ballyhoo on Blue Water Candy Jags or large Ilanders are the best bet for generating bluefin strikes. 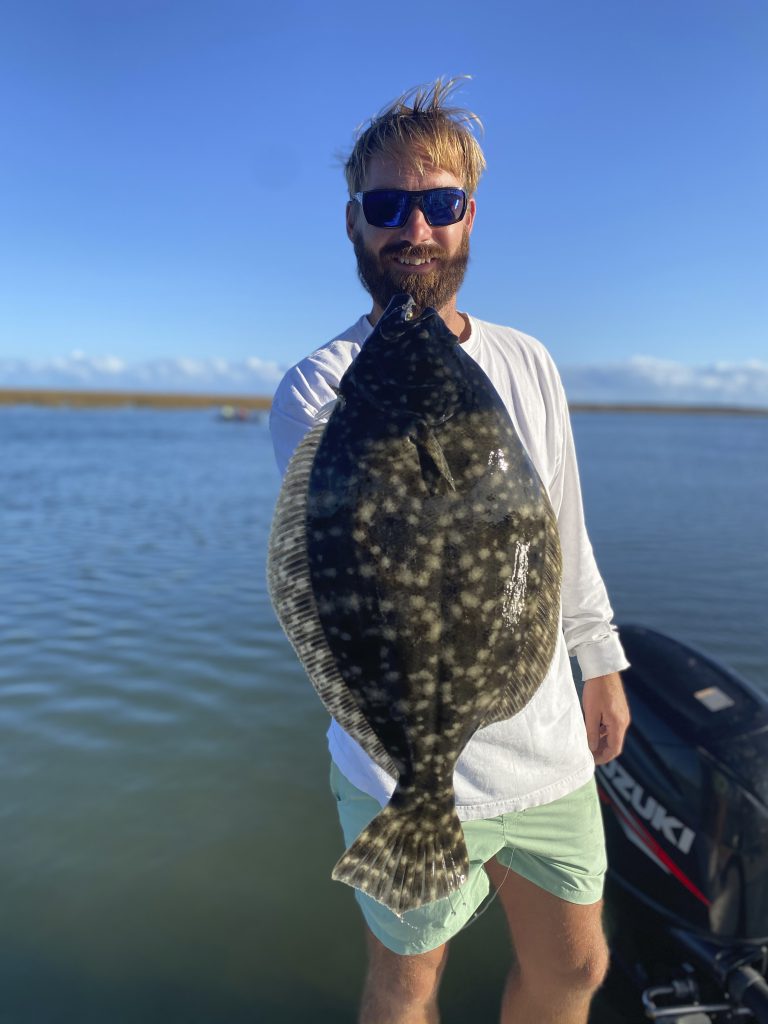 Kirk Peterson with a flounder that was caught (and released) on a curly tail grub behind Atlantic Beach.

Chris, of Mount Maker Charters, reports that speckled trout and red drum action has been very good from the sound out to the jetties and in the surf-zone. This season’s warm weather may see this bite stay strong longer than normal.

False albacore fishing has been great along the beaches. The schools are feeding around the shoals out to nearshore reefs. Scattered schools of over-slot red drum are also holding at the nearshore reefs, as the reds finish their push out of the northern sounds.

Deeper structure (in 100-120’ range) with warmer waters have been holding large king mackerel, amberjacks, and good numbers of bottom fish.

Speckled trout and red drum action will be slower as we move into winter, but both species will be holding in a few of their favorite areas along the ICW and into the creeks and rivers.

Nearshore runs will be producing good bottom fishing (mixed with amberjacks and kings) in the 100+’ range.

Justin, of Breakday Charters, reports that inshore speckled trout action has been spotty compared to past years. Z-Man and Gulp soft plastics fished in the deeper fall haunts are producing keeper fish, with numbers of keepers and size of schools being smaller in numbers.

Red drum action has been very good from as inland as the Neuse River out to the surf. Targeting these schools near docks, bridges, and jetties has been most productive. Both soft plastics and cut baits are getting strikes, but as the water cools, natural baits become the favorite. Black drum are staged up at these same structures feeding on crabs and shrimp.

Sea mullet fishing has been great in the Turning Basin and deeper inlet holes for anglers fishing two-hook rigs with shrimp.

False albacore fishing has been strong out along the beaches. The areas around Beaufort Inlet and the Hook are holding good-sized schools hitting Albie Snax and casting jigs.

Anglers are seeing bluefin tuna already showing in the area, and this is promising as the season draws near.

Over the next few months, the inshore marsh creeks will be holding all the action. Speckled trout will be hitting soft plastics on lightweight jig heads or MirrOlure MR-17s and similar twitch baits. Red drum can be caught around areas of structure with cut mullet, and black drum will be holding in the same deeper structures, with shrimp being the best bait.

Dave, at Cape Lookout Charters, reports that speckled trout fishing has been very good, with fish being found from the sounds back towards the Newport and North rivers. Going into the winter, the specks will school up, and targeting these rivers and backs of creeks will be the best bet.

Red drum are beginning to move into their large wintertime groups. Schools of mullet are still inshore, but with dropping temperatures and gin-clear water, anglers anticipate the bait (and the reds following the bait) to head into the inshore flats and surf zone. Targeting the red drum in the winter requires stealth, as the fish spook easy in clear water.

The large amount of glass minnows in the area have kept false albacore around. Sight-casting to these surface-feeding fish with casting jigs is a great tactic and should remain successful until around Christmas. 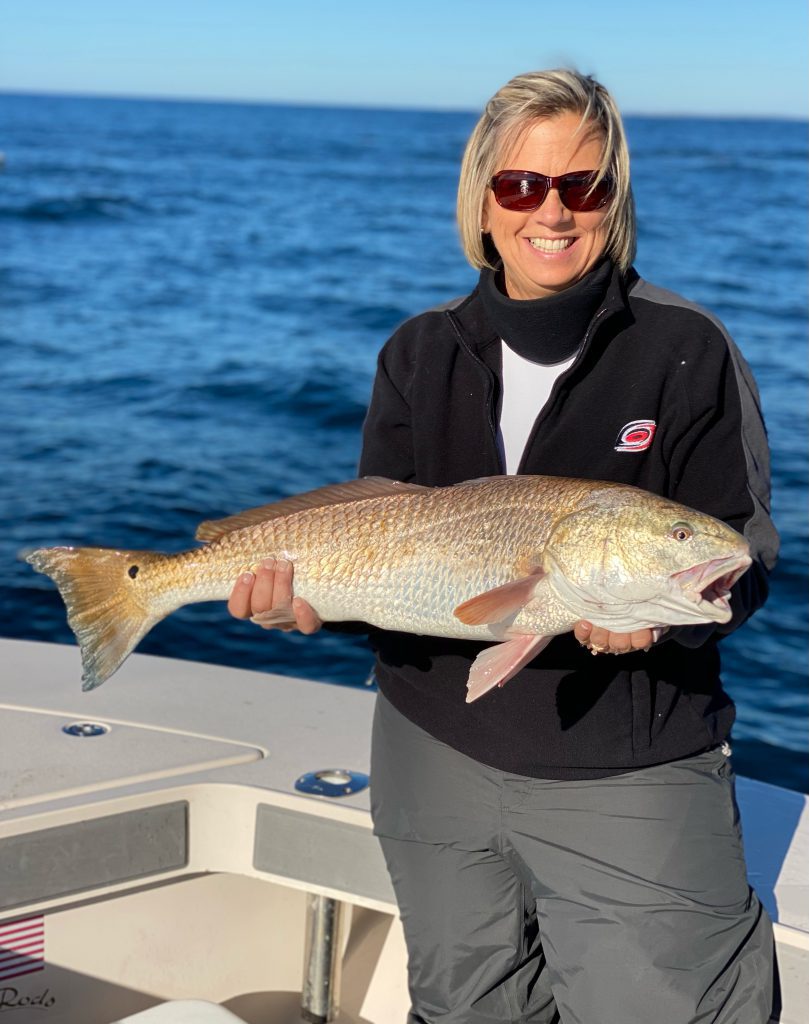 Sarah Weinhold with a red drum that fell for an artifical while fishing out of Atlantic Beach with Capt. Chris Kimrey of Mount Maker Charters.

Joey, of Dancin’ Outlaw, reports that bottom fish action has dominated the late season bite. A variety of triggerfish, vermilion snapper, and large amberjacks are holding on offshore structure.

Wahoo and blackfin tuna are being caught while trolling out near the break. Both of these species will be the main targets of Gulf Stream trolling trips through the end of the year.

King mackerel are scattered from the 15-mile range on out. This bite may not last too much longer, with water temperatures quickly falling below their upper 60-degree preferred range.

Jessica, of Oceanana Pier, reports that bottom fishing has been best, with large sea mullet and puffers hitting fresh shrimp, and a good amount of sheepshead are being caught around the pilings with shrimp and sand fleas.

Speckled trout numbers have been very good, as these fish have been pushing out of the sounds to feed.

Spot fishing has been sporadic, but cooler temperatures should see them (and croakers) in more abundance.