Matt, of Chasin’ Tails, reports that it has been a great winter for speckled trout fishing. The mild weather kept fish active through some of the toughest months, and the bite only gets better from here. Anglers are catching their limits of fish while using a large variety of baits. Hard lures such as MirrOlure MR17s and YoZuri 3D shrimp are popular in the deeper holes, along with Z-Man soft plastics and Betts Halo Shad. Recently, the topwater bite has picked up with the rising water temperatures, and Heddon Spook Jrs. are a local favorite.

Red drum are also holding in these same inshore haunts, and they’re hitting many of the same offerings targeted towards trout.

Anglers fishing in the turning basin are seeing the initial push of sea mullet into the area. Sam’s Gitter Rigs tipped with shrimp are being very productive so far.

Surf fishing is starting to warm up, with anglers reporting sea mullet from around the area’s piers.

Offshore anglers have been reporting some large wahoo (up to 74 lbs.) while trolling skirted ballyhoo behind planers.

A few blackfin tuna and king mackerel are in the mix, and they’re hitting the same skirted baits.

Paul, of Freeman’s Bait and Tackle, reports that speckled trout fishing has been good in the area thanks to a mild winter. Anglers have been successful in targeting fish in mainland creeks, especially up towards the Neuse River and Adams Creek areas. Both hard suspending lures and soft plastics are getting bites.

A few red drum are holding in these same areas, and they’re mixed in deeper holes with the trout.

Sea mullet have begun to make a showing throughout the turning basin. Bottom rigs with shrimp are producing well, and the coming weeks should see more fish push in.

Even with mild weather, local anglers are looking for ocean temperatures to creep into the 58+ degree range. This number has been a huge turning point for those waiting for spring fishing to really turn on. 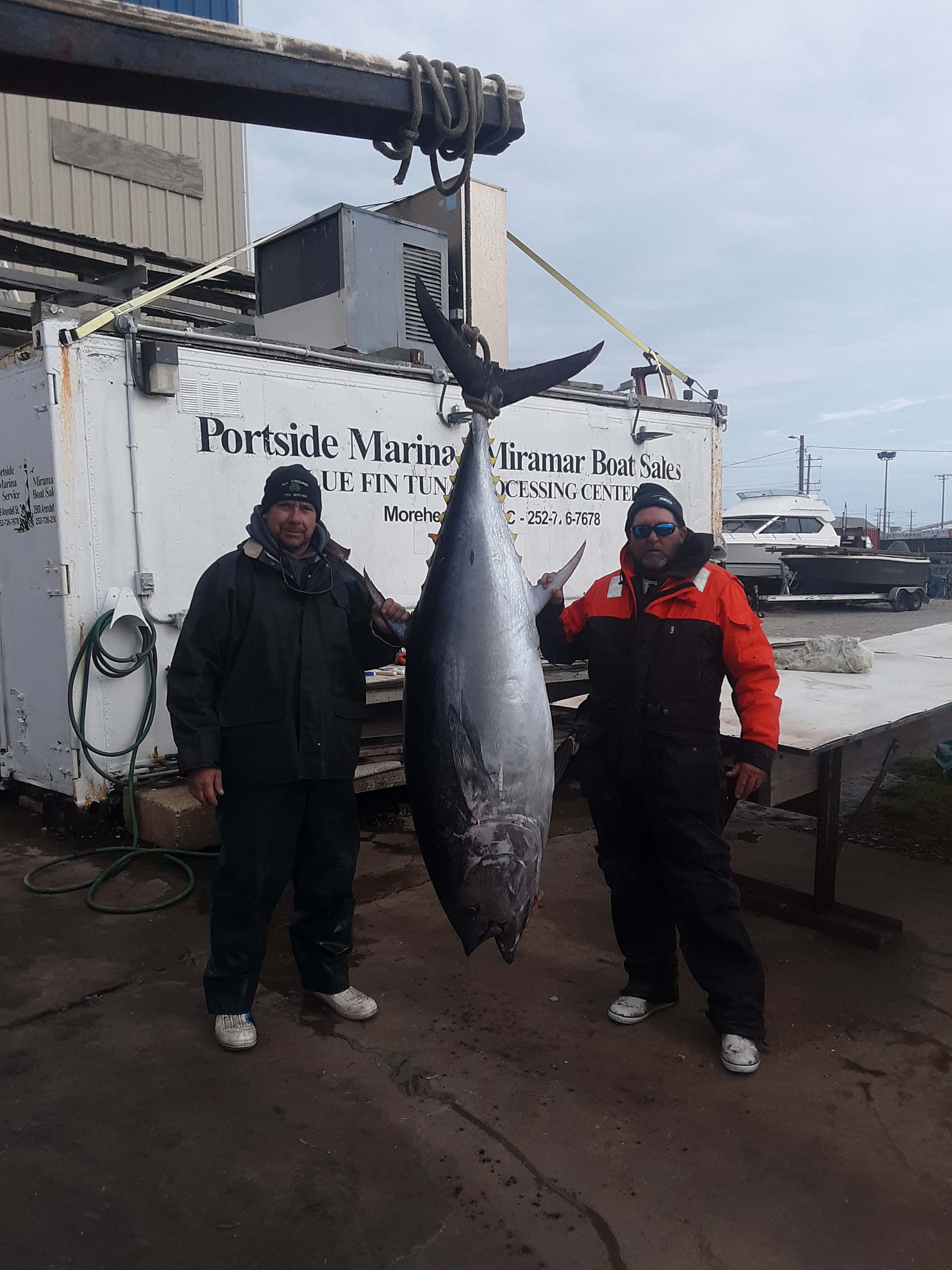 Rob Campbell and Chris Jenkins with an 80″ bluefin tuna caught 2 miles off of Bouge Inlet on a 23 ft. Contender, The Wire Nut, on a horse ballyhoo.

Chris, of Mount Maker Charters, reports that nearshore fishing is on the cusp of breaking open, with fish arriving from offshore everyday.

Bull red drum will be showing up around the shoals and on the east side of Cape Lookout. Sight casting is a favorite method in landing one of these lifetime fish as they head for the inlets.

The local wrecks and bottom structure are holding good numbers of black sea bass, and in the coming weeks they are joined by gray trout.

The larger roaming schools of bluefish are on their way in as well, with the bigger, chopper-sized fish usually a part of this first wave.

Anglers should have their eyes peeled for false albacore and Atlantic bonito coming into the area. Casting jigs is the preferred method, but it is key to not run on top of the fish, as it immediately shuts their feeding pattern off.

Trolling offshore will be producing large wahoo, blackfin tuna, and hopefully some yellowfin this season. Skirted ballyhoo will be the favorite bait for these species.

Bottom fishing the deeper ledges with cut baits or jigs will produce some good battles with amberjacks.

Justin, at Breakday Charters, reports that speckled trout fishing has been strong all winter, and this arrival of warmer weather only ramps up the action. Both Z-Man and Gulp soft plastics have been great for targeting these fish in the high current areas of inshore creeks. MirrOlure MR17s have been the hot lure all winter, and suspending baits are great for working the deeper holes.

In the coming weeks, inshore anglers anticipate the topwater bite for speckled trout picking up.

Slot-sized (and just short) red drum are moving in around ICW docks, bridges, and jetties. Gulp soft plastics on 1/4 oz. jig heads are a favorite setup for working these structured areas.

Sea mullet and pufferfish are moving inshore and will be staged up in deeper holes near the inlet.

Nearshore structure in the 60’ range is loaded with black sea bass feeding well on cut baits.

Dave, at Cape Lookout Charters, reports that speckled trout fishing has been off the charts. Topwater plugs, suspending lures, and popping corks have all been successful. As far as color goes, it seems like the louder, the better.

The redfish action in local creeks and surf zones has been consistent. The surf-side reds (up to 25”) have been whacking 1 oz. gold or silver Johnson spoons. The inshore reds holding in creeks are reacting best to 3” soft plastics paired on 1/4 oz. jig heads. Finesse white has been a popular color on recent trips.

In the coming weeks, anglers will be looking for the citation-class red drum to arrive on the east side. Larger bucktails (2 oz.) are the go-to rig, and color won’t matter for these aggressive fish.

Thomas, of Dancin’ Outlaw, reports that there has been good wahoo and blackfin tuna fishing out around Big Rock near the 40 fathom line. A stray sailfish was added to the counts last week, too.

Bottom fishing has been producing good numbers of triggerfish.

Wayne, of Oceanana Pier, reports that anglers were pleased to find the sea mullet biting on the pier’s opening day this past weekend. Bottom rigs with shrimp were the rig of choice, and though the bite was scattered, it was a good class of fish.

Pufferfish were mixed in the counts, and they’re hitting the same shrimp offerings.

Water temperatures seem to be rising quickly, and every little bit gets the fish more active in hitting the beachfront.