Joe, of Chasin’ Tails, reports that wahoo fishing has been very good for anglers out around the break, with plenty of large fish (80+ lbs.) around. Many of the larger kings being weighed are coming from deep as well. Both toothy species are hitting live and dead bait rigs. Blackfin tuna are holding on areas over structure and hitting skirted baits, and some yellowfin action has been found to the north.

A few sailfish are coming from the eastside of Lookout.

Bottom fishing has been producing great numbers of triggerfish.

Nearshore king mackerel fishing is absolutely on fire. Anglers are getting strikes from as shallow as 15’ out to structure in 100’.

Spanish mackerel are holding along the beaches, with most catches being larger fish (5 lb. range), and the false albacore bite has been phenomenal, with anglers spotting schools from the inlet out to wrecks in the 8-10 mile range.

The nearshore reefs are holding gray trout (up to 4 lbs.) for anglers fishing shrimp. These same gray trout are also pushed into the deeper inshore channels.

Sea mullet, croakers, and spot are feeding on bottom rigs from the inlet back to the Turning Basin. The deeper holes will see some oversized “old” black drum, too. Anglers looking to target speckled trout are waiting for the water to cool a little more to get the fish in larger schools. In the meantime, there are specks being landed out at the rock jetties. Good-sized red drum (up to 36”) are feeding in the marshes and along the beaches, and sheepshead have been scattered (but the fish being landed are mostly larger). 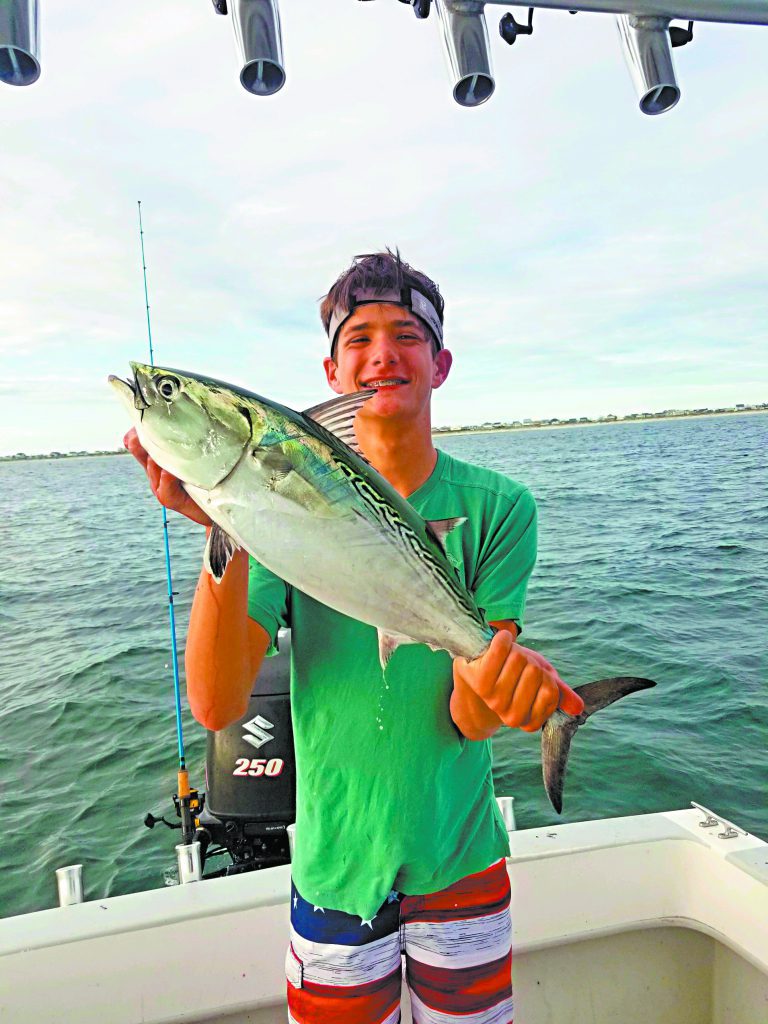 Colton Oliver, of Greensboro, with a false albacore caught casting a translucent pink Albie Snax off of Atlantic Beach. He was fishing with Capt. Justin Ragsdale of Breakday Charters.

Paul, of Freeman’s Bait and Tackle, reports that spots have shown up for anglers bottom fishing deeper holes in the Turning Basin and up around the Beaufort drawbridge. Bloodworms have been the favorite bait for getting bites.

Speckled trout fishing is spotty, with water temperatures not quite having the fish schooled up in their fall pattern.

Red drum fishing has been very good with all the baitfish still in the sounds. Carolina-rigged live baits fished along grass banks and docks are getting strikes. Catch and release flounder are also a consistent product of live bait fishing.

Out in the surf, pompano and croaker are feeding in the wash, and bluefish and false albacore are coming within casting distance for anglers rigged with Stingsilvers or similar glass minnow casting jigs.

Spanish mackerel action has been strong for anglers fishing from the inlets out along the beachfronts, with some being caught in the surf. These spanish are busting on bait pods and hitting casting jigs, trolled spoons, and live bait.

Chris, of Mount Maker Charters, reports that plenty of kings are being found from the beach out to the nearshore wrecks.

Spotting schools of surface-feeding false albacore has been productive for anglers rigged with casting jigs. Spanish mackerel are around and will been mixed in along the beachfront. Gray trout are feeding from the nearshore structures into deeper areas around the inlets.

A mix of sheepshead, black drum, and other bottom species are feeding in these same deeper holes around the inlets.

Red drum and flounder (released) are both feeding on baits from the inlets back into the marsh. Speckled trout are starting to show in better numbers. Over the next few weeks, this fishery becomes an angler favorite, with some great action to be found in a variety of deeper areas throughout the sounds. Water temperatures are currently just a touch warm to see the larger schools, though.

Justin, of Breakday Charters, reports that speckled trout are starting to move into their fall pattern as water temperatures cool. One quick cold snap should see the fish schooled up in channels, grass banks, and oyster banks.

Flounder are holding inshore and still being caught (and released) by anglers fishing live baits on the bottom. Red drum fishing has been awesome, with plenty of slot and over-sized fish holding on docks and inshore structure.

The deeper channels from the Turning Basin out to nearshore reefs are producing gray trout limits and black sea bass.

Along the beachfronts, anglers are landing spanish mackerel and bluefish while trolling and casting Breakday jigs. King mackerel are pushed onto the beach and hitting baits alongside the spanish.

Dave, at Cape Lookout Charters, reports that red drum fishing has been great, with fish scattered from the marshes out to the inlets. With an abundance of baitfish around, anglers look forward to this bite staying strong over the coming weeks.

Speckled trout are in these same inshore areas. The bite hasn’t quite broken wide open, as the weather is still doing its best summer impressions.

Off the beach, spanish mackerel fishing has been very good for anglers trolling the classic Clarkspoon and planer combo.

Some large bluefish (up to 4 lbs.) are mixed in these nearshore counts. 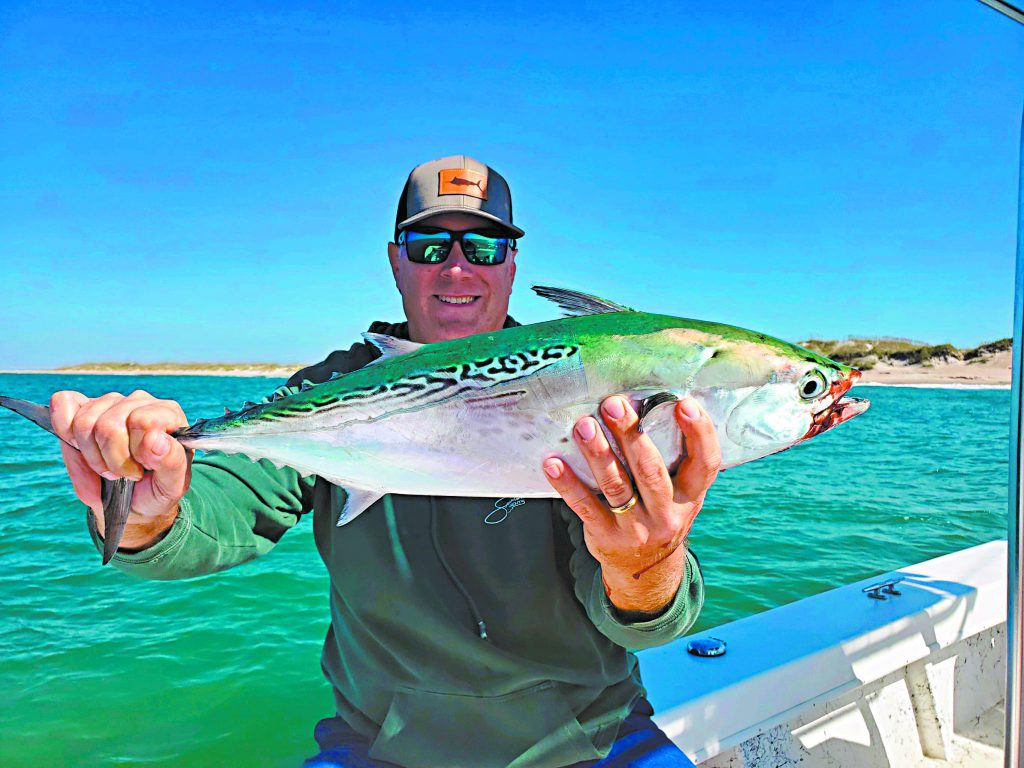 Will Booker with a false albacore caught casting a metal jig off Cape Lookout. He was fishing with Capt. Joe Tunstall of Carolina Traditions Guide Company.

Joey, of Dancin’ Outlaw, reports that wahoo action out at the break has been very productive. With water temperatures still warm nearshore, this bite should only get better as a more defined break pulls bait together.

Blackfin tuna are around in solid numbers for anglers pulling their favorite skirted offering over good bottom.

Triggerfish have been plentiful for anglers taking a break from trolling, and nearshore trips are catching limits of larger spanish mackerel (up to 5 lbs.).

Good numbers of kings are holding from the beach out to 10 miles and have been aggressively striking a variety of trolled baits.

Good-sized puppy drum (up to 20”) are being caught with Carolina-rigged finger mullet. A few catch and release flounder are also feeding on these finger mullet.

Sea mullet are hitting smaller bottom rigs with a variety of baits.