Patrick, of Captain Smiley Fishing Charters, reports that water temperature fluctuations have had the speckled trout wacked out of their typical fall pattern. Over the next few weeks, anglers look forward to the action being much improved as the current stabilization of temperatures have their feeding patterns kicking into high gear.

Drifting shrimp under a float is a sure-fire method for these fall and winter-time trout, with incoming tide cycles being most productive. Target areas such as deeper grass banks, inshore ledges, and oyster beds in the 6’ depth range.

Redfish are being caught on this same pattern, but anglers are also having success in the shallower structured areas. Work dock pilings with soft plastic jigs and live shrimp.

Black drum action has been great, though most of the schools are holding in deeper holes. Target these inshore ledges and holes with shrimp on incoming tides.

Rough weather has kept anglers off the jetties, but expect a mix of reds, black drum, trout, and the occasional flounder to be hanging around the rocks.

Surf-zone action has been centered around the bottom feeders, with whiting, croakers, pompano, and a few flounder being landed. 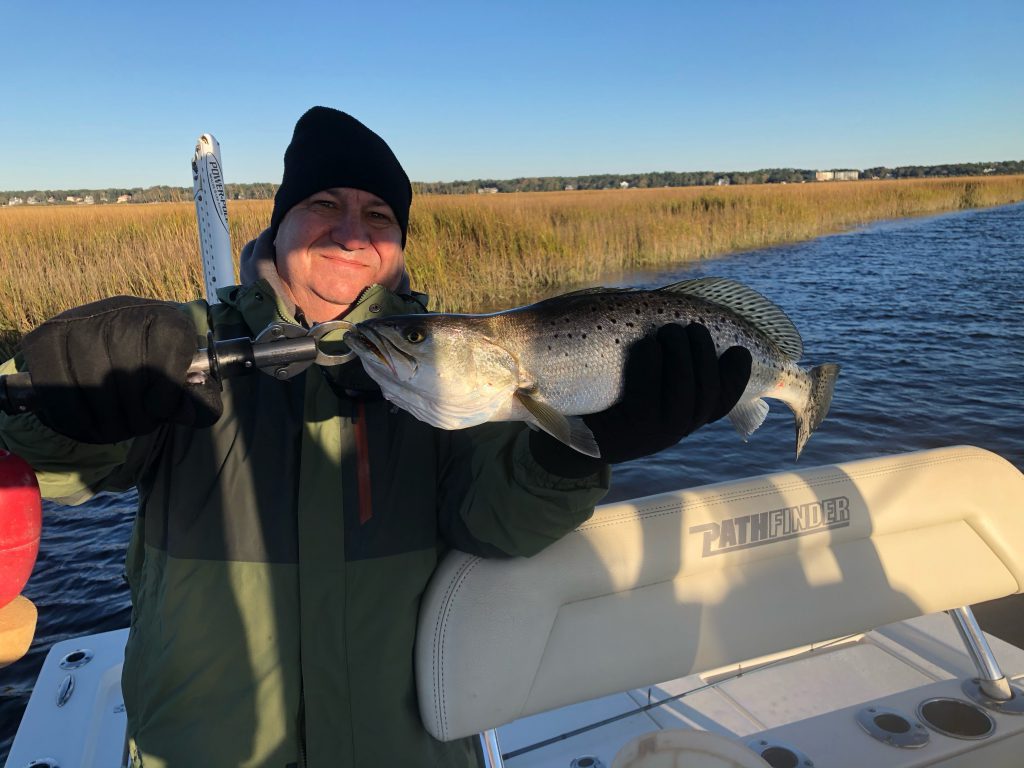 Ed Peter, of Fairfax, VA, hooked this trout on a Vudu shrimp in the North Myrtle Beach area. He was fishing with Capt. Patrick Kelly of Captain Smiley Fishing Charters.

Bob, of Strange Magic Fishing Charters, reports that the bite has remained strong as the water temperatures remain in the 60-70 degree range. Speckled trout are being caught, though not in large numbers yet. This should change as the water cools, and live shrimp are the ticket (when you can find them). Gulp soft plastics on jig heads, as well as MirrOlures of various colors, are the go-to artificials when targeting the specks.

Trout like the water moving, so focus in on creeks draining to larger waters during a falling tide and target the shallows during a rising tide. Oysters and grass banks in the ICW are also good areas to key in on. Look for these current-filled areas with around 5’ of water.

Redfish are very active and are being caught with live minnows, fresh shrimp, and Gulp soft plastics. Target docks near structure and creek banks that hold bait for the best red drum action, and using a trolling motor to cruise up and down the back creeks casting to the banks helps to locate these smaller groups.

A few black drum are also in the mix, although not in the numbers and sizes of previous years. They will fall for anything with scent and a shell, with fresh shrimp usually being the easiest to obtain. Typically, they will be hanging out in the same areas as the redfish.

Flounder are also still around, but they are starting to retreat back into the ocean for winter. The flatfish will be fooled by live minnows, as well as Gulp baits, fished slowly along the bottom.

With the cooler nights affecting the water temps, slow down your presentation. As the saying goes, if you think you’re going slow, go slower. This proves truest over the coming months.

Larry, of Voyager Fishing Charters, reports that bottom fishing is great in the 120’ range. Large scamp grouper, amberjacks, porgies, triggerfish, and black sea bass are all being caught in good numbers with a variety of cut baits.

King mackerel are pushed out in the 20 mile range, and they’re hitting drift lines. With the water temperatures still being relatively warm, anglers look forward to a solid December king bite.

Wahoo have been hit or miss in the Stream, but look for the bite to pick up going into winter.

Bottom fishing is great for anglers looking to get action in these cooler months. The nearshore and offshore rocks and ledges are loaded with fish ready to strike any bait that comes near, as they go through a natural prey shortage.

Cameron, of Little River Fishing Fleet, reports that bottom fishing has been spectacular over recent weeks. Big beeliners, triggerfish, and gag grouper (up to 20+ lbs.) are feeding at offshore structure.

Drift lines fished over these areas are getting strikes from large king mackerel (up to 35 lbs.).

A few monster wahoo (up to 85 lbs.) are holding in these same depths, and this should continue until cooler water pushes them deeper.

The 15-30 mile range has been producing plenty of schoolie-sized king mackerel (up to 25 lbs.).

Schools of false albacore are breaking the surface from the beaches out to 15 miles.

As the month moves on, grouper fishing will stay strong through the end of the year, and black sea bass and beeliners stay active all winter over rocks and similar structure.

Trips to the break will be producing wahoo, tuna, and some dolphin. 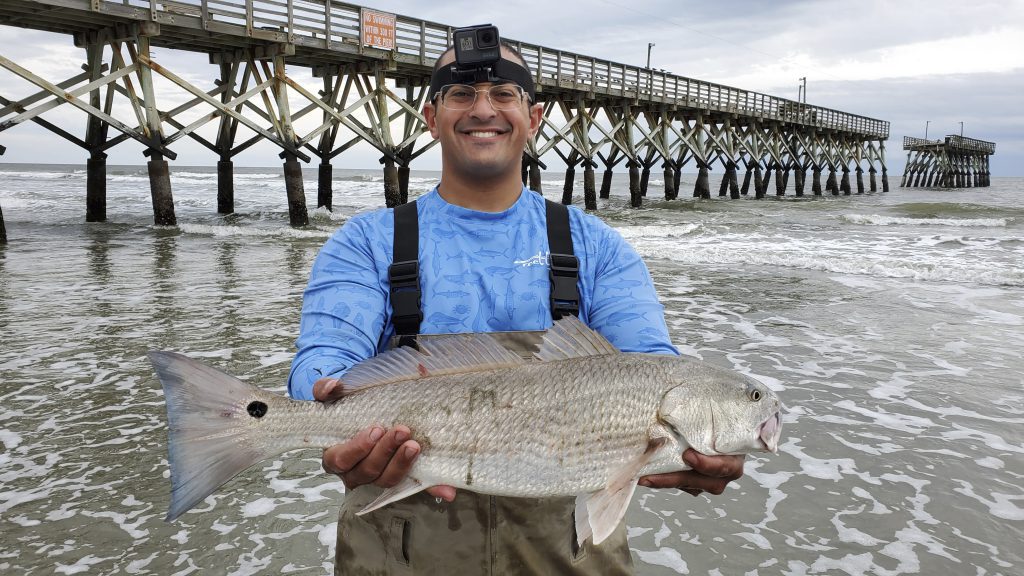 John Selwanes caught this red drum with a fresh mullet fillet on a hand-tied, fluorocarbon bottom rig. He was fishing the Cherry Grove surf in North Myrtle Beach.

Lynn, of Apache Pier, reports that good numbers of whiting are coming over the rails for anglers fishing bottom-rigged shrimp.

A good variety of slot and over-slot red drum are feeding on cut mullet.

There are still a few spanish mackerel being caught on casting jigs worked through the surface-feeding schools. Another dip in water temperatures should see these spanish push out of the area, though.

A few spot and croakers are mixed in the bottom fishing action, and they’re coming on a variety of offerings: bloodworms, shrimp, or artificial bait strips.