Patrick, of Captain Smiley Fishing Charters, reports that redfish action has been excellent since the water temperatures are still up. Carolina-rigged cut shrimp or live finger mullet on 3/8 oz. jig heads have been getting strikes when fished around oyster beds and creek mouths. The outgoing tide cycles have been best, as they have been flushing the fish into deeper holes and tighter groups.

Bull red drum are being caught with cut mullet around the inlet. The bite has been a bit spotty, with action not quite at its peak, but fishing around deep holes and rocks are the best options.

A few speckled trout are being caught in the early mornings with topwater plugs and finger mullet. The action hasn’t broken loose, but the trout being landed are keeper-sized.

Black drum are staged around docks and inshore drop-offs, and they’re hitting cut shrimp on the incoming tide.

Flounder season has been steady in SC waters. Keeper flatfish are being landed with live mullet fished in holes and creek mouths. 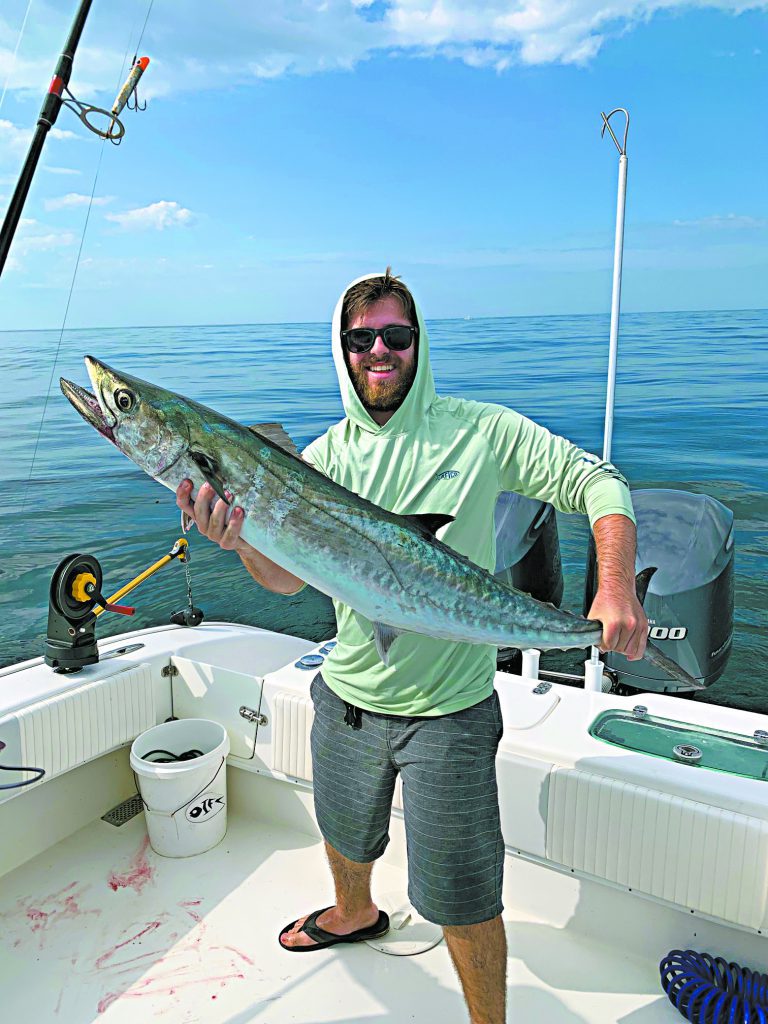 Holden Carroll, of Raleigh, NC, with a king mackerel caught 15 miles off Little River Inlet. He was fishing with Capt. Kay Carroll aboard PharmaSea.

Bob, of Strange Magic Fishing Charters, reports that the bite has been sporadic, with one day being fantastic and then only average on the next.

Redfish have been the most consistent, with all the live bait in the area. The reds are being found on grass banks off the ICW and along mainland creeks on higher tides cycles, and they’re falling for everything from soft plastics to live minnows. Popping cork rigs are also effective.

These fish have been a bit spooky, so moving around as stealth as possible has been key, especially in the creeks. Using the trolling motor to quickly work banks along the way is a great tactic.

This technique has also been producing flounder (catch and release).

The water temps have been holding in the mid-70s, which means that many unwanted species are still around to pester baits.

Speckled trout action has been spotty, as the trout wait for water temperatures in the 60s to really fire off.

Black drum are mixed in, with plenty of smaller fish around. Targeting as many docks as you can along the ICW, as well as deeper holes in the creeks, with fresh shrimp has produced the most bites.

King mackerel fishing has been great in the 25 mile range. Many of these kings are in the 15-20 lb. range, and they’re hitting live bait and Drone spoons.

As water temperatures cool into November, anglers should see a push of blackfin tuna move in over structure around the break.

Over the next few weeks, look for blackfin tuna and large wahoo to stage up around the break as water temperatures continue to cool.

Large king mackerel (up to 40 lbs.) can be found over ledges holding bait in the 8-20 mile range. With all the bait around, anglers may stumble upon a random species, such as a yellowfin tuna caught in the 10 mile range.

Along the beaches, live baits are getting strikes from king mackerel and large sharks. 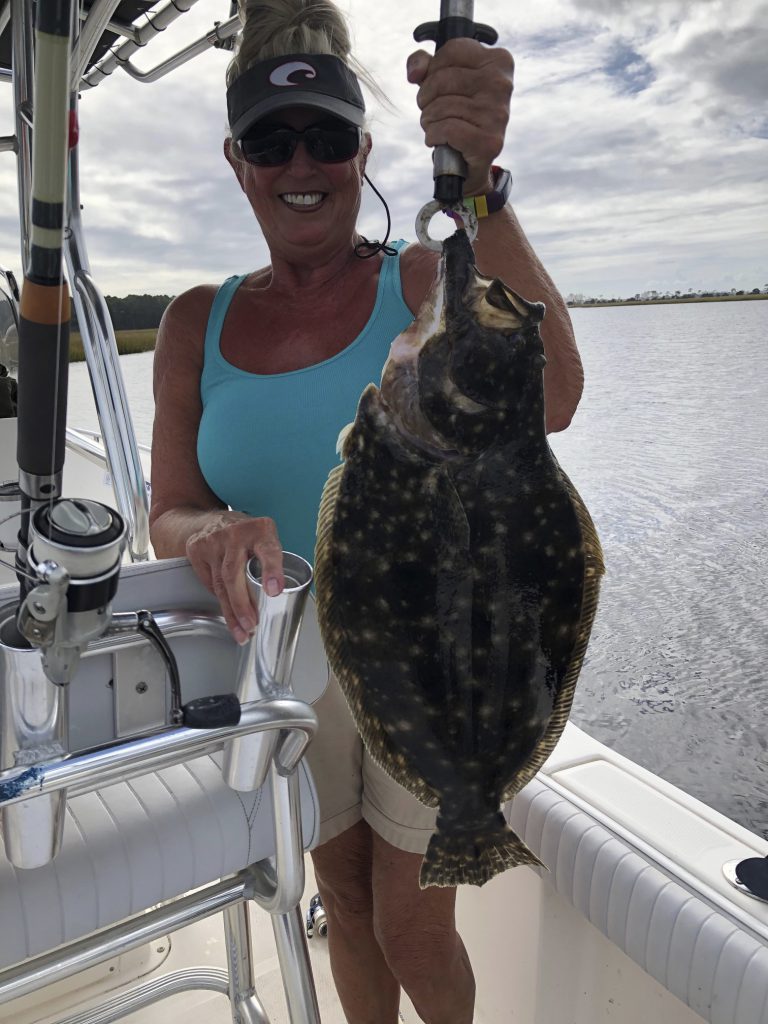 Kathy Magee, of Kings Mountain, with a 5 lb. flounder caught while fishing in Dunn Sound.

Michael, of Cherry Grove Pier, reports that bottom fishing anglers have been landing good numbers of whiting and croaker on cut shrimp and bait strips.

Spots are mixed in the counts, though there hasn’t been a big push just yet.

Red drum fishing has picked up a lot in recent days, with fish now following baits up and down the beaches. Carolina-rigged cut mullet has been producing most of the bites.

Black drum have been around in good numbers, and they’re feeding on fresh shrimp.

Anglers tossing Gotcha plugs with gold-colored hooks are landing plenty of spanish mackerel, and king mackerel action has been great on pin-rigged live baits. Quite a few days are seeing double-digit numbers of kings caught.

Lynn, of Apache Pier, reports that king mackerel fishing has been hot, with good numbers of fish (up to 35 lbs.) hitting live baits.

Red drum have been falling for Carolina-rigged cut shrimp and mullet, with rougher weather days being best.

A few smaller flounder are mixed in for anglers bottom-fishing baits.

Larger spanish mackerel are striking Gotcha plugs cast to surface-feeding schools, and scattered ribbonfish and good numbers of bluefish are also being caught with casting jigs.