Betty, of TW’s Bait and Tackle, reports that surf anglers on the northern beaches have been having a great speckled trout bite. Quite a few citation-class trout are being landed with soft plastics and MirrOlures.

Good numbers of red drum are mixed in along the beachfront, and they’re feeding on cut finger mullet. Bottom rigs are producing sea mullet, black drum, and pufferfish.

Sound-side anglers are catching a few scattered speckled trout, but most of the action is turning to striped bass. Going into winter, striped bass will be caught near structured areas in deeper water, such as around bridges.

A few puppy drum are being caught with Carolina-rigged baits inside the inlets.

Offshore fishing has been headlined with great yellowfin and blackfin tuna action, with wahoo mixed in.

Going into winter, local water temperatures make a significant drop. Bottom fishing in the surf will be the most productive tactic, with scattered red drum, dogfish sharks, and skates as the most common target species.

Inshore anglers will continue to transition from trout over to striped bass, and a lot of attention will be on the Manteo area bridges.

Offshore anglers should expect to see good tuna fishing, at least through the end of the year. 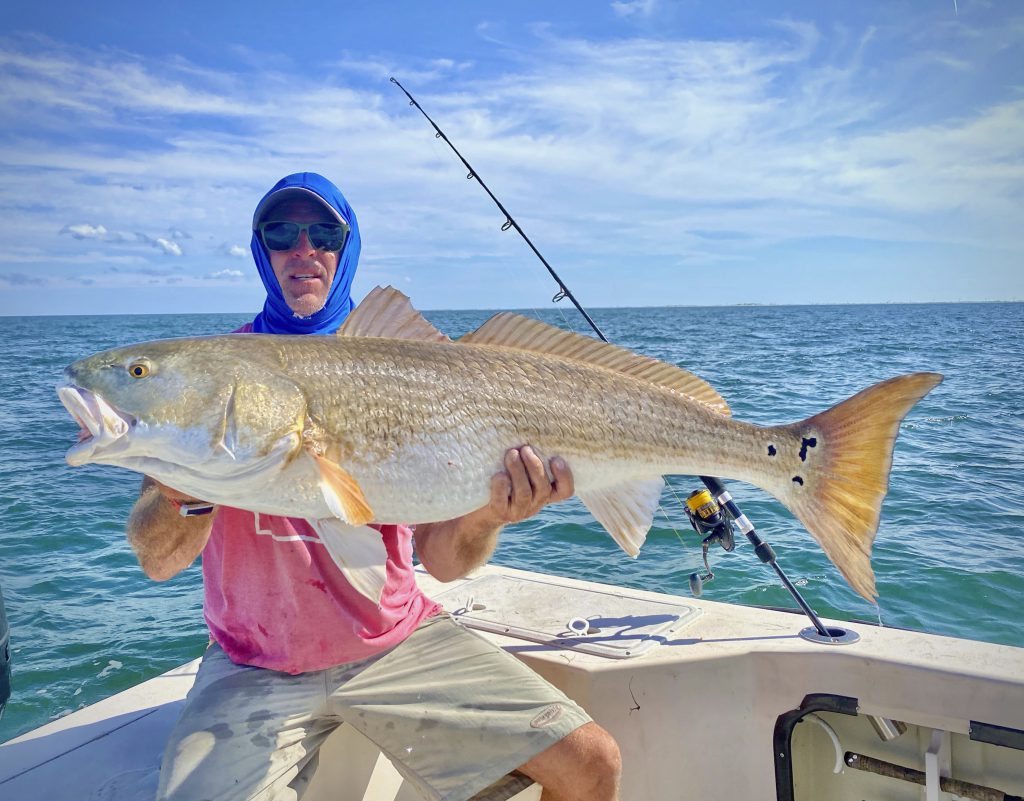 Capt. Donnie Davis, of DOA Charters, with a late season over-slot red drum that fell for a 2 oz. Meat Hog jig. He was sight casting off of Nags Head.

Bridgette, of Oregon Inlet Fishing Center, reports that when the fleet gets nice weather days, they are seeing the docks fill up with a great class of yellowfin and blackfin tuna. A few large bigeyes are hitting the trolled offerings alongside the yellowfins.

Wahoo are scattered, and their appearance will remain steady through the end of the year.

Laurie, of Pirate’s Cove Marina, reports that the tuna have been very active with the cooling temperatures, and boats are returning with plenty of yellowfin and a few large bigeyes.

Wahoo are mixed in, and the wahoo bite should only get better as we move further into winter.

False albacore are hitting trolled and sight-casted jigs, and black sea bass fishing has been phenomenal at the nearshore structures.

Inshore trips are starting to find striped bass around bridges and deeper ledges. This action stays steady through the winter until the fish push inland to spawn in the spring.

Red drum and a few speckled trout are being caught around the inlet.

Aaron, of Carolina Sunrise Charters, reports that inshore action has transitioned into the creeks and backwaters, as water temperatures finally dropped under the 60s.

Speckled trout are being targeted with slower presentations. Suspending lures such as MirrOlure MirrOdines work great for targeting a certain depth in the water column.

Red drum will hit the same artificial lures, but they seem to always prefer cut baits in these cooler months.

Jim, of Fishing Unlimited, reports that speckled trout fishing has been picking up, now that water temperatures are dropping. Many of the recent catches have been smaller trout, but good numbers of keepers are starting to mix in for anglers fishing both bait shrimp and artificial lures.

Puppy drum and black drum are being caught by anglers fishing bait on bottom rigs.

As winter gets further along, the speckled trout action should remain until the end of the year. After that, anglers shift their efforts towards the striped bass that get active around the area’s bridges. Rat-L-Traps or Stretch lures trolled along pilings tend to get the most strikes. 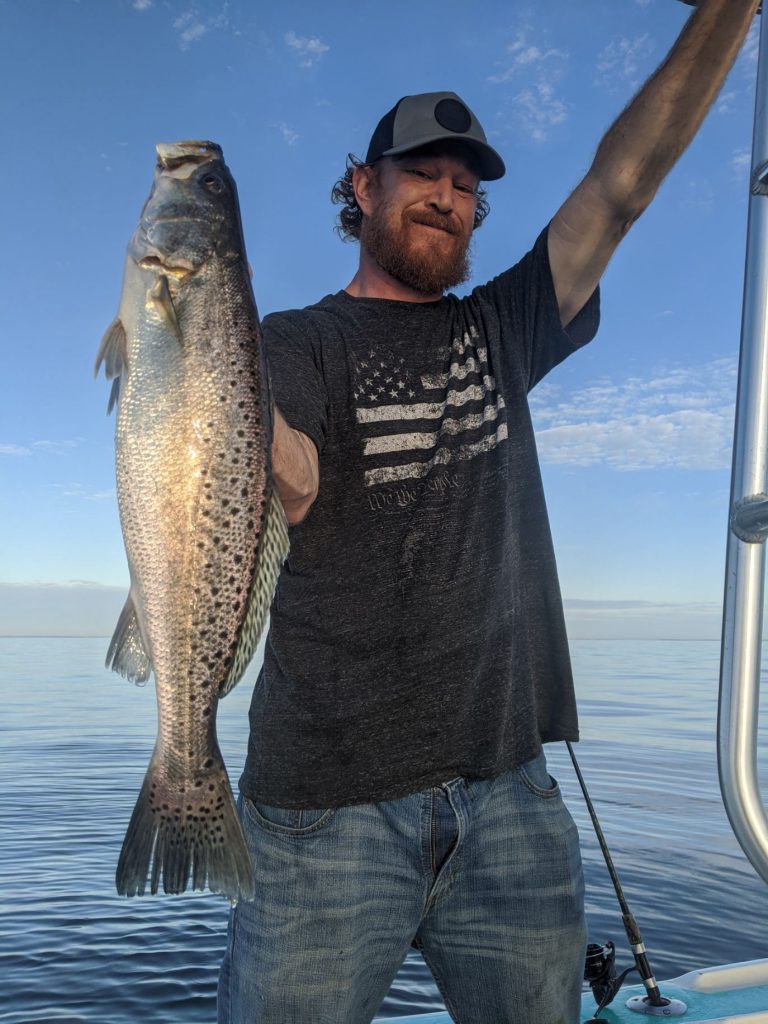 Rick S., from Virginia Beach, with a trout caught using a Z-Man paddletail and a 1/4 oz. Trout Eye jig head in the sound near Wanchese. He was fishing with Capt. Aaron Beatson of Carolina Sunrise Charters.

Andy, of Nags Head Pier, reports that anglers fishing bottom rigs have been on top of the action with the water temperatures dropping. Sea mullet, speckled trout, and a few bluefish are all hitting bait shrimp.

Puppy drum are being caught with cut finger mullet.

Justin, of Avalon Pier, reports that bottom fishing has been generating good numbers of sea mullet. Carolina-rigged cut mullet has been producing red drum. The days with rougher ocean conditions have had the better action.

Speckled trout are holding in good numbers through the surf zone. Anglers are targeting the trout with shrimp and artificials in deeper holes behind the breakers

Jon, of Bob’s Bait and Tackle, reports that surf fishing has been solid thanks to water temperatures still holding a warmer pattern. Large sea mullet (up to 3 lbs.) and black drum are staging in the deeper holes between sandbars.

Puppy drum are being caught with Carolina-rigged fresh cut mullet, and speckled trout fishing has been good for anglers targeting deeper holes early and late with soft plastics and MirrOlures. Scattered bluefish are mixed in.

Wintertime fishing gets slow if water temperatures drop too low. Most action during the colder months is with skates and dogfish sharks on cut baits.

Bluefish and red drum tend to push down around the Rodanthe area beaches once the bite slows on the northern beaches.

Jeff, of Albemarle Fishing Charters, reports that striped bass fishing has been good in rivers off the Albemarle. Anglers are targeting these schools in 5-9’ of water in the river mouths and along bridges. Striped bass remain a great target for wintertime anglers, as they stay more active in the cooler water temperatures. These schools will be holding in the same areas until their springtime spawn pushes them upriver.

A few puppy drum and speckled trout are in the mix, though recent rains have pushed much of the saltwater action closer to the inlets. This movement has led to more largemouth bass and other brackish-water fish in the counts.