Betty, of TW’s Bait and Tackle, reports that red drum action has been great in the surf on the Nags Head area beaches. The rougher waters have been great for bringing the schools in close for anglers fishing cut mullet.

Black drum and speckled trout are mixed in the action for anglers fishing with fresh shrimp, and pompano have been the main catch on smaller bottom rigs.

Inshore trips have been catching sea mullet and spanish mackerel in the inlet.

Further inside, anglers are catching good numbers of speckled trout and some striped bass up to the Manteo-area bridges.

Plenty of red drum are staged up on flats around the inlet, with cut baits producing most of the bites.

Boats getting offshore are filling boxes with both blackfin and yellowfin tuna, and mahi are still producing limits on some trips to add to the great dock counts.

A few wahoo and billfish are also included in the daily catches. 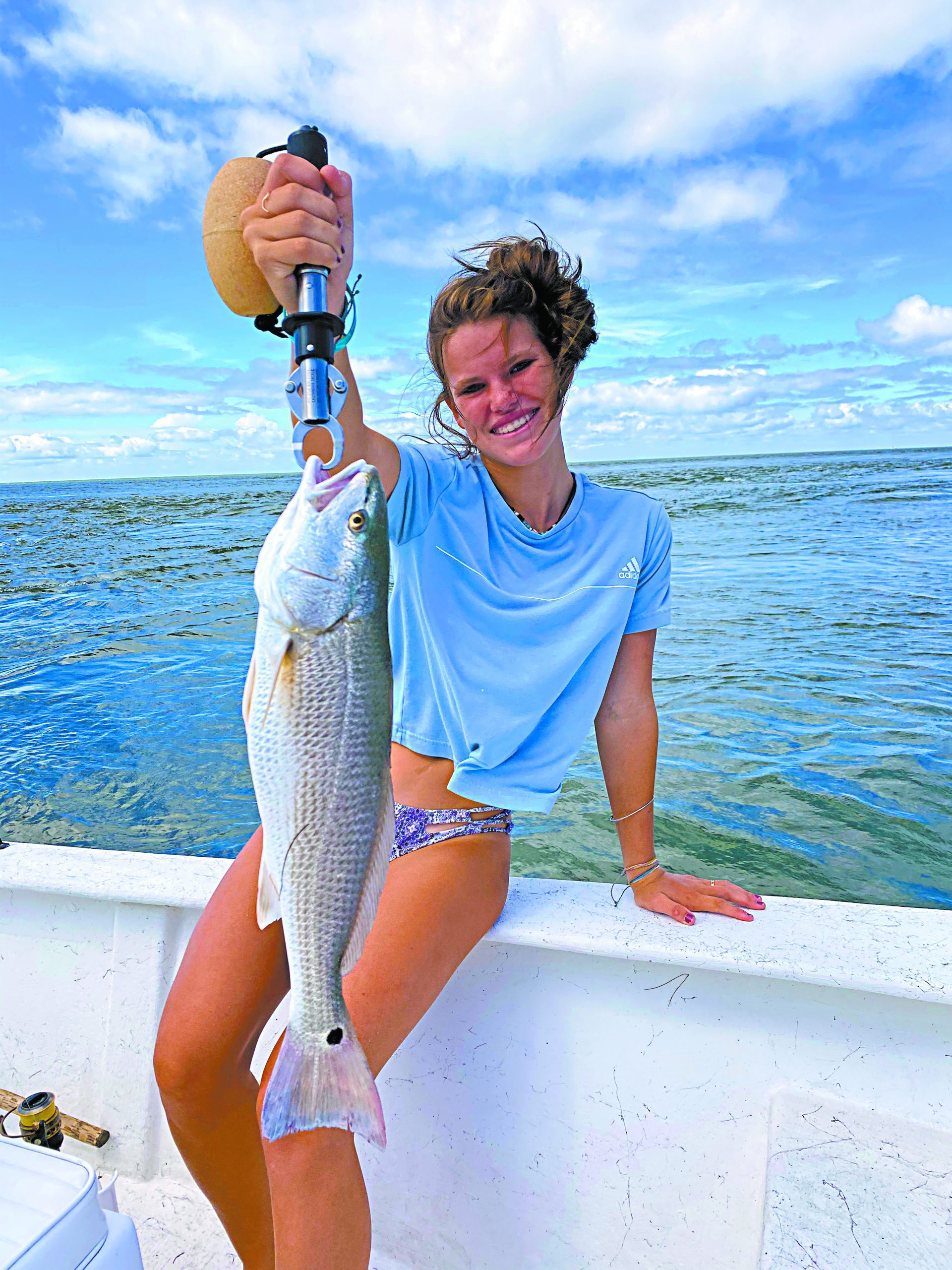 Hannah Hogan with a redfish caught on a Carolina rig while fishing Oregon Inlet.

Bridgette, of Oregon Inlet Fishing Center, reports that the blackfin tuna bite has been on fire, with plenty of fish hitting the docks.

A few yellowfins are also in the counts, and anglers anticipate this action continuing over the next few weeks.

Good-sized wahoo (up to 45 lbs.) are hitting high-speed rigs and skirted baits under planers, and white marlin and sailfish are around outside of the break.

Large king mackerel have shown in the counts as fall fishing hits its stride.

Nearshore trips are working the beachfronts for spanish mackerel, bluefish, and ribbonfish.

Speckled trout fishing in the sound has been great all year, with anglers reporting limits of keeper-sized fish.

Red drum and bluefish are feeding on the same flats and ledges inside the inlet.

Laurie, of Pirate’s Cove Marina, reports that offshore trips have been having great yellowfin and blackfin tuna action. Some larger wahoo are in the same areas around the break.

A few dolphin are mixed in, though falling water temperatures should push the mahi south.

Nearshore trips are trolling along the beaches for spanish mackerel, bluefish, and ribbonfish.

False albacore are in the mix, and they’re hitting trolled spoons and casting jigs when breaking the surface.

Inshore sound trips are enjoying great fishing for speckled trout. This bite will only continue and get better as it moves into late fall.

Striped bass, bluefish, and red drum are also being landed by inshore anglers.

Aaron, of Carolina Sunrise Charters, reports that speckled trout are on the top of most angler’s targets, with 3-4” Z-Man soft plastics on 1/4 oz. jig heads being very productive. A new hot color has been the “Redfish Toad.” When fishing the flats, using a popping cork helps keep the bait suspended over the bottom. Targeting deeper edges or oyster reefs down to 8’ requires using the naked plastic and jig head combo.

Red drum action has been good, with mostly cut baits providing the action.

On days you can match the right tide and wind patterns, anglers can land both trout and reds with topwater plugs on grass flats.

Little Bridge anglers are finding speckled trout fishing to be picking up, especially early and late in the day. Most of the action is coming off artificial baits and shrimp.

Justin, of Avalon Pier, reports that bottom fishing has been awesome, with anglers catching a mix of spot, sea mullet, and pompano.

Speckled trout are starting to show up in the surf zone, and most of this action is early and late in the day. Over the next month or so, cooling water temperatures should see better numbers in the channels between sandbars.

Bluefish are surface feeding on baitfish around the pilings and falling for Gotcha plugs.

Black drum are being caught with fresh shrimp on bottom rigs, and anglers fishing cut baits have been landing a few red drum.

Jeff, of Albemarle Fishing Charters, reports that striped bass fishing has been really good in the Albemarle Sound. Keeper-sized bass are staged up around bridges, pilings, and similar structured areas striking artificial baits. Rat-L-Traps in the 3/4 oz. size are best around stump fields and shoreline structure, while trolling Mann’s Stretch 20 plugs are successful around bridges.

A few puppy drum and speckled trout are mixed in around these areas. If water salinities can continue to stay up, the mixed bags will continue to show.

Surf anglers on the Nags Head area beaches are catching sea mullet and spot while bottom fishing the deeper troughs just off the sand. Those fishing cut baits are hooking into red drum and tailor-sized bluefish in these same areas.

Neil, of Bob’s Bait and Tackle, reports that there has been a good speckled trout and red drum bite in the surf for anglers casting cut mullet and shrimp. Fishing on days with rough water has been most productive for bringing both species in close.

Sound-side anglers have been landing over-slot red drum and speckled trout around the inlet.