Jeff, of Ocean Isle Fishing Center, reports that speckled trout fishing has been great from the ICW to the Shallotte River, with water temperatures having the fish active just about everywhere. Target the trout with all the go-to fall and winter rigs, such as soft plastics, twitch baits, and live bait (when available).

Large whiting are being caught in deeper holes around the inlets with cut shrimp.

Black and red drum are both hitting live shrimp fished around structure and oyster beds. Cut shrimp on bottom rigs work great for both species.

As the winter settles in, look for the black drum action to stay steady. Target oyster beds in mainland creeks with shrimp.

Speckled trout also continue to bite through the colder months, with slow moving lures being the key to a successful trip. Anglers do well in turning to 6” Z-Man Trout Trick soft plastics on jig heads. 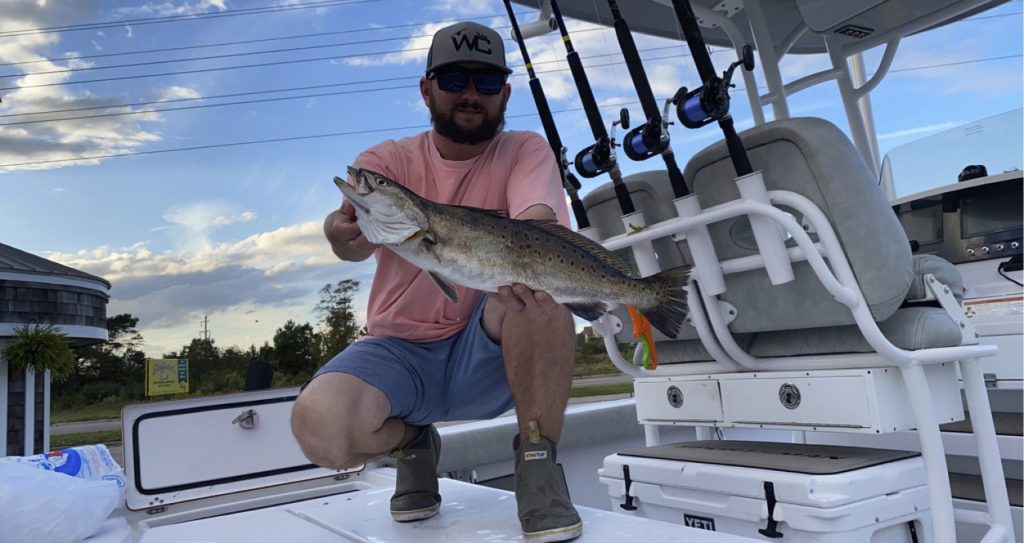 Joshua Graves with a speckled trout caught on a Fathom Squirrely Tail grub and a Fathom jig head while fishing the Sunset Beach area.

Brant, of Ocean Isle Fishing Center, reports that king mackerel fishing has been great in the 60-80’ depth range. Plenty of schoolie-sized kings (up to 20 lbs.) are hitting slow-trolled baits. The warmer than average temperatures should see this bite last until Christmas.

Grouper action has been solid, with fish pushed into the 70-90’ depth range, though large numbers of red snapper have made targeting the grouper difficult on recent trips.

Good amounts of blackfin tuna and wahoo are being caught on Gulf Stream trips. Both of these species dominate the wintertime offshore fishery and only get better as nearshore waters cool.

Tyler, of Rigged and Ready Charters, reports that surf anglers have been catching good numbers of whiting and spot in the surf zone with shrimp.

Off the beach, king mackerel have been holding in the 20 mile range, with many of these fish being larger (up to 46 lbs.).

Trips to the break are producing wahoo for anglers pulling Sea Witches, Iland Sea Stars, and the go-to classic Ilanders.

Blackfin tuna are hanging around the Steeples and similar areas, and a couple scattered mahi are being found under various flotsam.

Tim, of Tideline Charters, reports that the action has been all about the speckled trout in this late fall season. Live shrimp fished under slip floats have been all but a guarantee for action, with many other artificial baits producing as well. Z-Man Trout Tricks in “fried chicken” or “mood ring” colors have been producing when paired on 3/16 oz. Trout EyeZ jig heads. Anglers have had most strikes while targeting areas of strong current along deep grass banks and oyster beds.

Topwater action is still to be found in the early mornings, with MirrOlure Top Dogs in mullet pattern being most successful. On days with clean water, brighter lures such as Paul Brown Fat Boys in pink and orange colors get strikes.

Plenty of redfish, sheepshead, and black drum will be caught using these same methods, with live shrimp being best for all three species.

Going into winter, anglers will be using these same methods, making sure not to work baits too quickly as to deter sluggish fish. Look for areas with deeper holes early, then if the weather is nice, search the shallower areas for consistent water temperature.

Tripp, of Capt’n Hook Outdoors, reports that speckled trout fishing has been very good, with the schools now headed back into the creeks. Target these trout with live shrimp or plastics around oyster banks.

Red drum action has been strong, with plenty of smaller drum (16-20”) feeding in the shallows. A few schools of slot-sized fish are mixed in, and as the water cools, it becomes easier to find the larger fish mixed in.

King mackerel are staged over live bottoms in the 60-80’ depth range. Slow-trolled cigar minnows on dead bait rigs have been the go-to setup.

Over the cooler months, inshore anglers will continue to find success with speckled trout and red drum. Both species keep moving to shallows in creeks and around inlets where sunnier days heat the fish up. Fishing on the warmer days is sometimes key to getting more strikes.

Wahoo action gets better offshore moving into the later part of December. 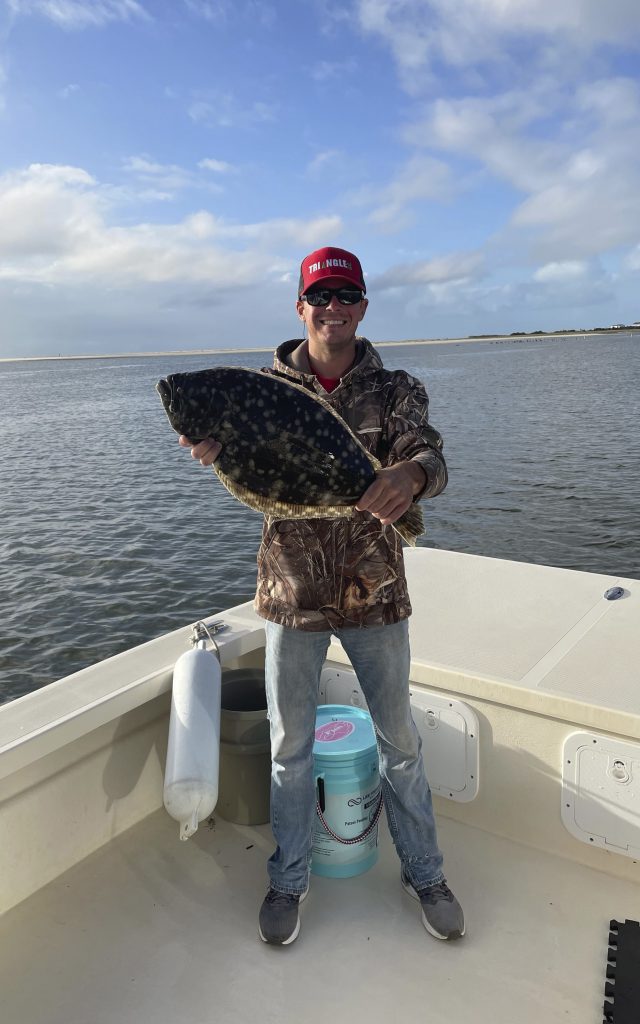 Matt Hauser, of Ocean Isle Beach, with a 24” flounder caught (and released) on a live mullet near Shallotte Inlet.

Stuart, of Rod and Reel Shop, reports that black drum fishing has been really good around nearshore docks and oyster beds. A few red drum are mixed in around these same areas.

Speckled trout numbers have been picking up. Most of the trout are being hooked out along the ICW, as they’re not quite making the push into creeks yet. As the water continues to cools down, the trout will school up even more in the creeks. This has anglers optimistic about trout fishing as we move into the winter months.

Whiting and pompano are being caught with bottom rigs fished in deeper holes around the inlet.

Rob, at Ocean Isle Beach Fishing Pier, reports that anglers have been pleased with the good numbers of large whiting being caught. Bloodworms have been out-fishing bait shrimp.

A few croakers and pompano are mixed into the bottom fishing counts.

There have been quite a few black drum being caught, but many are just short of keeper size.

Speckled trout action is being found in the sounds, and any day anglers should see some of these schools move into the surf zone. Target them with shrimp fished on bottom rigs closer to the backs of breakers.