Jeff, of Ocean Isle Fishing Center, reports that red drum action has been great inshore. The bait is thick in the area and has the reds still holding in many of their late season haunts. Target areas around docks, bridges, and shallow oyster beds with Carolina-rigged live mullet.

There are scattered over-slot red drum around the inlet out to the nearshore reefs, and the action could get better as water temperatures drop just a little more.

Black drum numbers are very good, with live shrimp getting most of the strikes.

Some trout are also hitting live shrimp, with the best action being around oyster beds and deeper grass banks.

Spanish mackerel are thick from the inlets out along the beaches. Anglers are boating fish while both trolling spoons and casting jigs. Some larger spanish are being caught with live baits.

Kings are mixed in alongside the spanish mackerel, with live baits getting the best strikes. 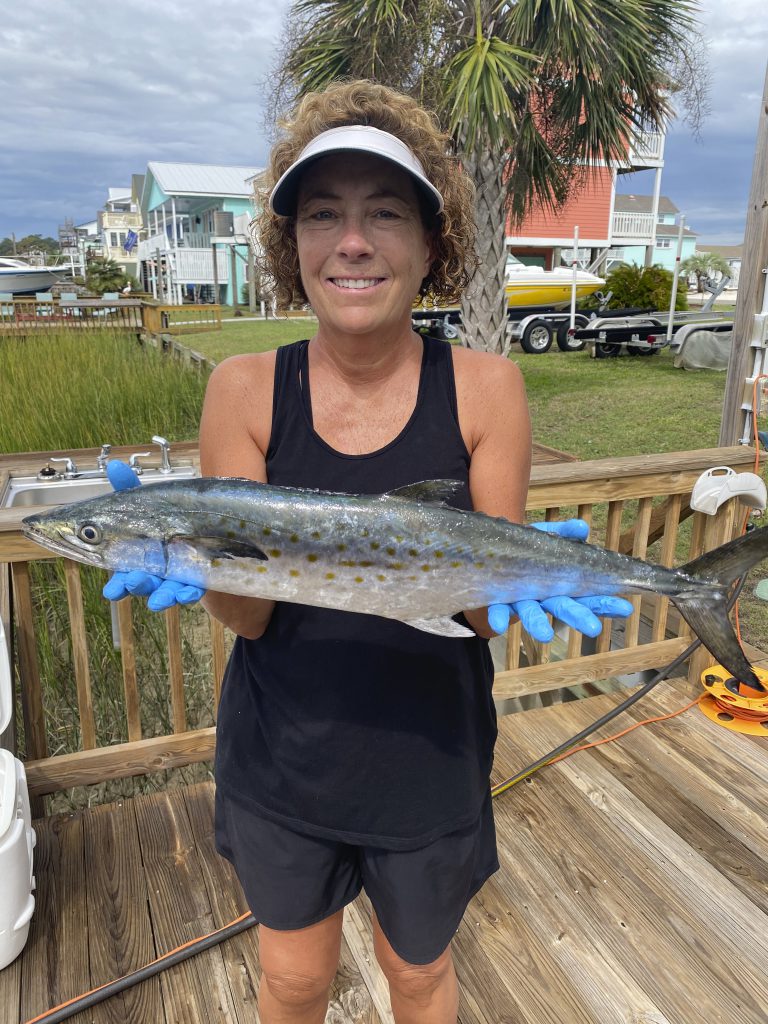 Michelle Hailey with a 5.5 lb. spanish mackerel that fell for a free-lined finger mullet while fishing off Holden Beach.

Brant, of Ocean Isle Fishing Center, reports that nearshore anglers are catching large numbers of spanish mackerel and bluefish. Both species have been very focused around the bait schools pushed along the beach.

Citation-class red drum are feeding on the bait pods as they migrate through the area.

King mackerel fishing has been the hot ticket, with really good numbers of fish being caught from the beaches out to 15+ miles. Both slow-trolled live baits and dead baits on skirted rigs are getting strikes.

Further offshore in the 25+ mile range, bottom fishing has been good. A mix of grouper, triggerfish, and large amberjack are being caught around live bottoms and structure.

Kevin, of Rigged and Ready Charters, reports that trolling along the beaches has been producing great numbers of spanish mackerel.

King mackerel fishing has been on fire, with a great class of fish holding from the beachfront out to 20 miles. The action has been so great that it has been difficult to maintain a full spread on some trips due to repeated multiple hookups. Water temperatures are still fairly warm, and baitfish are plentiful. This should signal the bite lasting well into November.

Blackfin tuna are being caught around the break, and this tuna bite should only pick up over the next few weeks.

Trip, of Capt’n Hook Outdoors, reports that citation-class red drum action has been awesome over the last few weeks, but as the bait moves out, these fish are pushing off the nearshore reefs and the bite is slowing down.

King mackerel fishing has been great from the beachfront out to 15 miles. Trolling live pogies is basically candy for these kings and producing multiple hookups.

Inshore, red drum and speckled trout fishing has been very good, and for the trout especially, the fall action is just now starting to fire off. Over the coming weeks, dropping temperatures will get the specks schooled up in creek channels and along grass banks, and they will be hitting a variety of artificial baits. 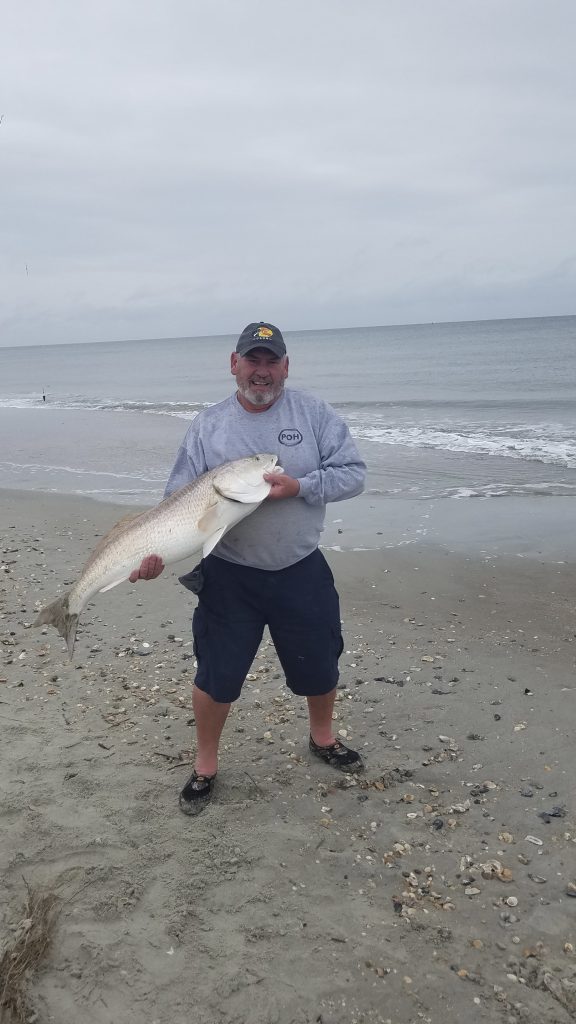 Tim, of Tideline Charters, reports that the bull red drum fishing has been very strong. Plenty of 35-40” reds are being caught with live and cut pogies on Carolina rigs. Heavier 2-3 oz. lead weights have been needed to keep the baits down in the deeper holes, and anglers have also had success while checking around the beachfront bait pods.

The speckled trout fishing has picked up, and anglers look forward to the next few weeks really firing off this fishery. Casting live and artificial shrimp under corks during a rising tide has worked best.

Scattered sheepshead and black drum are feeding on these same live shrimp offerings around oysters and grass banks.

Spanish mackerel fishing remains strong in the 20’ range, with most strikes coming on Clarkspoons behind #1 planers.

This time of year, slow-trolling pogies along the same shallow beachfronts will produce king mackerel.

Fishing fresh bait shrimp on the bottom around pilings has been producing sheepshead and black drum.

A few flounder releases are coming from those anglers with bottom-rigged baits.

Bluefish are pushing around the pier, and they’re hitting casting jigs, Gotcha plugs, and cut baits.