Donald, of Custom Marine Fabrication, reports that speckled trout fishing has been very good in the area’s creeks. Anglers have been most successful finding fish in deeper holes over muddy bottoms. MirrOlure and Paul Brown lures have been getting strikes, with their suspending action appealing to the sluggish fish. Z-Man soft plastics are also extremely popular and very versatile, working well on sunnier days that have fish pushed shallow.

Shad fishing has been hot, with fish being caught from the Spring Garden area up to Kinston. Shad rigs and small grubs on light tackle setups are most popular for these fun-fighting fish.

Striped bass are holding around structured shoreline in these same areas.

Gary, of Spec Fever Guide Service, reports that striped bass fishing has been very good upriver of New Bern. The stripers are holding on the ledges and bends on their way to spawn. Larger Storm Coastal GT swim baits (4”) have been producing well when targeting these deeper fish. With the weather temperatures rising, anglers are seeing some of these fish push onto the shallows and strike topwater plugs. Storm Chug Bugs have been a favorite for those looking for a big blow up.

Speckled trout have been biting well all year, as anglers enjoyed a strong winter season. Currently, these fish are staged around the midway point of the New Bern and Oriental area creeks, hitting a variety of baits from soft plastics to topwater plugs.

In a general sense, the shallower creeks have had better action in part due to the slightly warmer water temperatures hitting the low 60s.

The next few weeks may not see a huge shift in patterns, but action should pick up with every warmer day signaling the beginning of a great spring season. 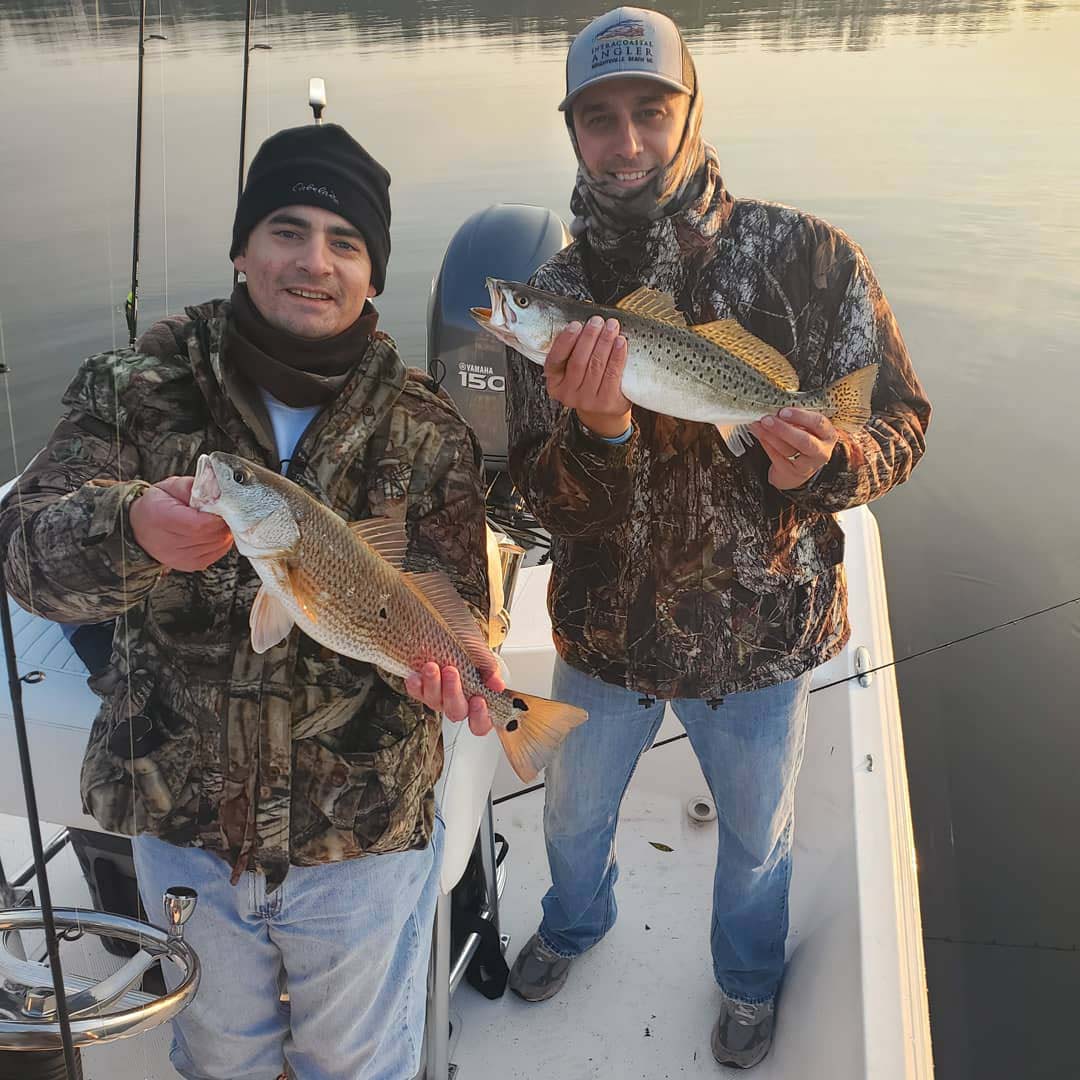 David Franklin of Wilmington and Philip Mosley of Beaufort with a double up of speckled trout ad a redfish. They were caught using MirrOlure 17s while fishing with Capt. Kevin Dewar of Three D Charters.

James, of Neuse River Adventures, reports that New Bern area anglers have enjoyed some of the best trout fishing seen in years. The mild winter was great for fishing, with specs staying active through all the usual slow months. Recent trips have found the fish still in their winter-time creeks, but these shallow areas are seeing water temperatures rise quickly. Anglers anticipate seeing topwater action pick up for the trout.

As the spring settles in, striped bass also get more active. A majority of the fish are in their spawn patterns, but New Bern also has a resident fishery that hangs around local structure all year long.

Jennings, of North State Guide Service, reports that fishing in the upper Neuse River has been excellent. Striped bass have been biting well around New Bern and further up, as the spring spawn run has begun. Topwater plugs and jerk baits are producing well when worked off the shallow, structured shorelines and down ledges.

Shad are being caught in good numbers from the deeper holes in these same areas. Shad rigs and smaller grubs are both producing strikes.

Not much further south, speckled trout have been hitting both soft plastics and MirrOlures very well. The warmer water temperatures have these fish starting to push out of the backs of local creeks, and the coming weeks should see the action get better with more aggressive fish.

Todd, of Neuse River Bait and Tackle, reports that a mild winter has had anglers pleased with the past month’s trout fishery. These fish seemed to have avoided a freeze and stayed active for those getting on the water and scouting local creeks. Suspending lures, such as MirrOlures, have always been a local favorite, but the water temperatures rising on some good weather days has opened up the topwater bite. Fishing early and late in the day is most productive for anglers looking for that exciting strike.

Red drum are being caught in the main river and roughly halfway up the extending creeks. These fish are mostly slot-sized (with a few just under-slot). Anglers report coming up on smaller groups of fish, landing up to 10 or so, and then seeing the bite shut off until moving upon another group some distance away. Popping cork rigs with Vudu shrimp have been a great setup.

Striped bass are being caught from the Minnesott area up into the upper portion of the Neuse. Casting 4” Z-Man Diesel MinnowZ paired with 1/4 oz. jig heads have been a productive set-up. Keeping a slow and steady retrieve has been getting most strikes, versus anglers choosing a jigging retrieve.

Richie, of East Side Bait and Tackle, reports that there has been some large speckled trout being caught in the area creeks. Cold water temperatures still have these fish in their winter haunts, but if weather patterns continue, there may be a move into shorelines closer to the river. Hard baits such as MirrOlures and Rapalas have been producing most of the action, with soft plastics holding their own, too. Bait choice aside, fishing a slow retrieve has been key.

Some striped bass are being caught near structured areas with hard baits. Rat-L-Traps and topwater plugs are both popular baits, and the baits get more productive as rising water temperatures get the fish more active.

Mitchell, of FishIBX, reports that striped bass fishing has been good on the Roanoke River. As these stripers work their way in from the sound, the fish are being caught all the way up to Williamson. Yee Ha soft plastics and Betts Halo Shad have both been productive baits for fishing the ledges. Rat-L-Traps and topwater plugs are also getting tons of action from the hungry fish. This bite will remain up and down depending on the release of water from the dam.

The Pamlico River bite has been great this year. The striped bass that are holding on structure and ledges from the Tar River on down are crushing Rat-L-Trap baits. A good, mild winter seems to have been great for these fish.

Speckled trout fishing has been steady as well, with anglers seeing this bite have a remarkable winter. These fish are beginning to move from the backs of creeks as water temperatures rise.

Over the next couple weeks, anglers should look for the topwater bite to really pick up. Storm Chug Bugs have been a hit this year, and a couple ticks up in water temperatures should have these fish even more active.