Bobby, of Custom Marine Fabrication, reports that striped bass have been actively hitting topwater plugs around structured areas of the river. Fishing early and late on warmer days has been key to this action.

Speckled trout fishing has been good in most creek areas, with the fish now schooling up. The cooler water temperatures have the fish staged in holes where a variety of MirrOlures, twitch baits, and soft plastics are getting strikes.

Some slot-sized red drum are in the lower river creeks, and they’re hitting cut baits and soft plastic fished along the bottom.

A surprising number of flounder are still holding over in the area. Usual seasons have seen the flatfish pushed out by now, but the prolonged presence of bait has them still around.

Over the next few months, anglers will be targeting speckled trout and striped bass. The stripers will be holding around deep structure, where the trout will head up the creeks to hold over. 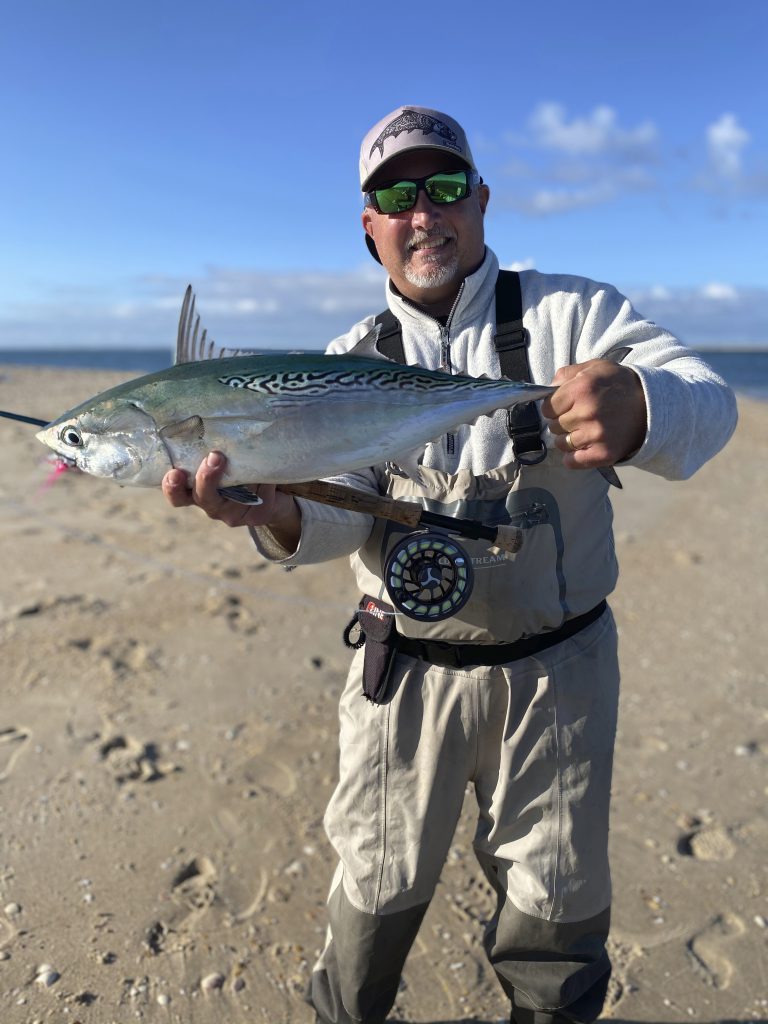 Geoffrey Lawther, from Raleigh, with a false albacore caught on a pink surf candy while fly fishing on Harkers Island.

Gary, of Spec Fever Guide Service, reports that speckled trout fishing has been very good in creeks off the lower Neuse. These fish have begun their transition up the creeks to winter over in the deeper holes, but warmer than average water temperatures are holding back some of that action. Before the temperatures drop too much, look for these trout to be holding along the banks and ledges, and they’re hitting baits worked from the shallows off towards the holes.

Soft plastics have been a great lure when paired on lighter jig heads that allow the baits to drift down with the current. Once winter settles in, fishing slow is very important in feeling the slight tap of a sluggish trout strike.

A few puppy drum are mixed in with the creek action. Some of these are resident fish that will stick around late into the year.

Striped bass are holding around areas of structure in these creeks and can be caught in the river all year long. In the coldest of months, target these fish in deep areas that have structure. They will be schooled up in the holes and require baits to come to them versus them actively chasing.

James, of Neuse River Adventures, reports that cooler temperatures have finally prevailed, and the fish are responding by transitioning into their typical late fall and early winter patterns.

Speckled trout action has been good, with many of the fish beginning to work back into the deeper holes of creeks. Over the next few weeks to months, it will be best to work baits slower in these holes, as to make an easy meal for the sluggish fish.

Redfish will be mixed alongside the trout in these creeks, up on flats and staged around structure in search of an easy meal.

Striped bass favor the cooler temperatures. They will be holding on structures in the deeper water.

Jeff, of Salt and Swamp Guide Service, reports that speckled trout are being caught in creeks off the Pamlico River. Cooler water temperatures are pushing these fish towards the back in search of deeper holes to set up on. Look for the trout to hold on these inshore ledges early, and they’ll hit soft plastics being worked off the shallows.

As the day moves on, the trout will settle into nearby holes, where the same soft plastics help anglers stay on the action.

Striped bass are always around, but they become a more common target in the winter months. Jigging soft plastics in deep holes (18-20’ of water) around the Tar River can produce some great action. These stripers hold in tight schools, and with cold temperatures having the fish sluggish, it is important to get baits right in front of their noses.

Carter, of Neuse River Bait and Tackle, reports that the trout have begun their push into the creeks, with most staged up along ledges in the creek mouths. MirrOlures, Custom Corkys, and soft plastics are all getting strikes. These trout are still just starting to school up, and the shop has already weighed plenty of larger fish (up to 26”).

A few puppy drum are being hooked in similar areas, though most have followed the bait schools back out towards the ocean.

Striped bass action is starting to heat up. Anglers are finding some good-sized fish around docks, pilings, and creek mouths. Saltwater Assassins and Z-Man soft plastics are both great go-to lures for these aggressive fish.

Once winter settles in, anglers will be successful in targeting the backs of the larger feeder creeks off the river. MirrOlure MR-17s are a local favorite, due to their abilities to be worked back extremely slow, which is so important for anglers looking for these sluggish wintertime trout.

Nick Perricone caught (and released) this 25″ speckled trout on a Rapala Shadow Rap while fishing in the Neuse River.

Kent, of East Side Bait and Tackle, reports that some large speckled trout (up to 8 lbs.) are beginning to show up. Most of the action has been from the Pungo and around Swan Quarter. Anglers are primarily using MirrOlures, and the hottest colors this season have been “hot olive” and “bone.”

Striped bass remain in the area as residents, but the shortage of a keeper season has kept reports to a minimum. Most of these schools will be staged up around structure and deeper ledges.

Slot-sized red drum are mixed in the creeks, and they’re hitting cut baits and soft plastics fished around docks and grass banks.

Over the winter the key is to slowly work baits that can sit in the strike zone and entice a “tap” from the sluggish trout. Look for the schools to mostly hold in deeper holes, with warm water days pushing the trout over shallower areas to warm up.

Mitchell, of FishIBX, reports that speckled trout are in their late fall transitions of heading up into the feeder creeks. Soft plastics on lighter jig heads have been producing most of the action, as water temperatures haven’t dipped too far. Over the next few weeks, cold snaps could get these schools of trout sluggish where suspending twitch baits allow anglers to work baits slowly through the strike zone.

Striped bass action has been good, and this fishery becomes a focus until the springtime spawn. Look for these fish to hold in deep water with structure, and use a variety of crankbaits and soft plastics to entice strikes.