Angie, of Dutchman Creek Bait and Tackle, reports that inshore anglers have been catching good numbers of black and red drum with bottom-rigged baits.

Speckled trout fishing has been solid, with the recent drop in water temperatures having the bite getting even better. Live shrimp is proving to be best, as long as it’s available. When using artificial baits, the Vudu and Savage shrimp are great alternatives. MirrOlures are also starting to be more productive, and especially when the water cools, they become one of the go-to lures throughout winter.

Offshore anglers are catching blackfin tuna and wahoo around the deeper structure. The bite isn’t quite on fire, but it should pick up any day as the cooling nearshore waters push the action back onto strong temperature breaks.

Over the winter, anglers can take advantage of nice weather days to make the run for consistent wahoo action.

Bluefin tuna may also make another showing closer to the beach after the turn of the new year. 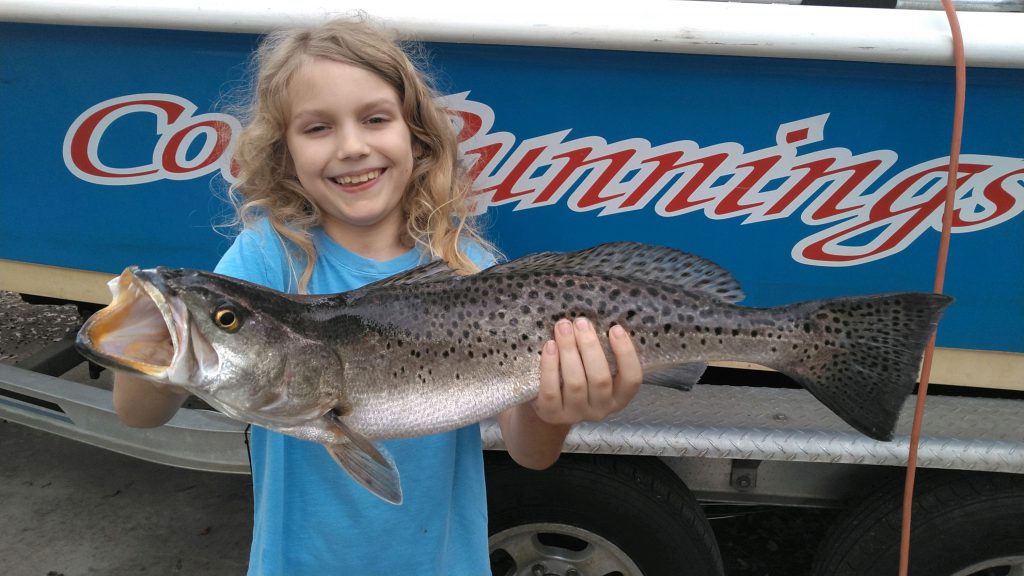 Harbor Hughes with a speckled trout caught while fishing behind Bald Head Island with his father, Capt. Greer Hughes of Cool Runnings Charters.

Tim, of Wildlife Bait and Tackle, reports that speckled trout fishing has fired up, with fish being found from the inlet back into the creeks.

Black and red drum are being caught with cut baits around structured inshore areas, and deep holes around the inlet are producing whiting, pompano, and some spot.

Bull-sized red drum are still scattered in the area. There have been some of these trophy fish hooked both off the surf with cut baits and out at the nearshore wrecks.

Grouper fishing has been great, with the action pushed into the 25 mile range. Anglers look forward to this great bite sticking around until the season closes.

Mark, of Angry Pelican Charters, reports that king mackerel fishing remains strong off the beaches. The fish are a bit deeper, but the warm waters pushing late into the year have provided an outstanding bite.

Wahoo and blackfin tuna are producing a majority of the offshore action, with the bite expected to pick up further as it gets closer to the end of the year.

Bottom fishing continues to be very productive as the water cools, with grouper and large black sea bass holding over rocks and ledges.

Inshore anglers are focused on the speckled trout action, as these fish have begun to move into the creeks. Slow-retrieved soft plastics and the go-to MirrOlure MR-17s are great for targeting these wintertime schools.

Ryan, of Fugitive Charters, reports that king mackerel fishing has been really good in the 20 mile range. These schools are striking cigar minnows or ballyhoo fished on Big Nic Mac-A-Hoos and similar dead bait rigs.

Grouper and large black sea bass are holding over structure in the same 20 mile range.

The nearshore reefs closer to the beach are loaded with gray trout and some bull red drum (up to 42”).

Trolling the beachfront is producing bluefish, bonita, and some spanish mackerel that are holding around in the warmer than normal water temperatures.

Offshore anglers are finding wahoo pushed in around the 40 mile range.

Blackfin tuna fishing has been really good, with fish scattered anywhere from 15-40 miles. There have even been some yellowfins caught inside the Tower.

Wally, of Oak Island Fishing Charters, reports that nearshore anglers are still catching good amounts of king mackerel over nearshore structure. With the warmer than usual fall, there is hope this action sticks around a few more weeks.

Grouper fishing has picked up a lot, with the fish moving into the closer structured areas.

Inshore speckled trout fishing has been great. The trout are actively striking live baits fished in creeks off the ICW.

Going into the winter, the speckled trout fishing remains solid in the area throughout the colder months. Anglers will be targeting the backs of creeks with live mud minnows to entice bites from these sluggish schools. 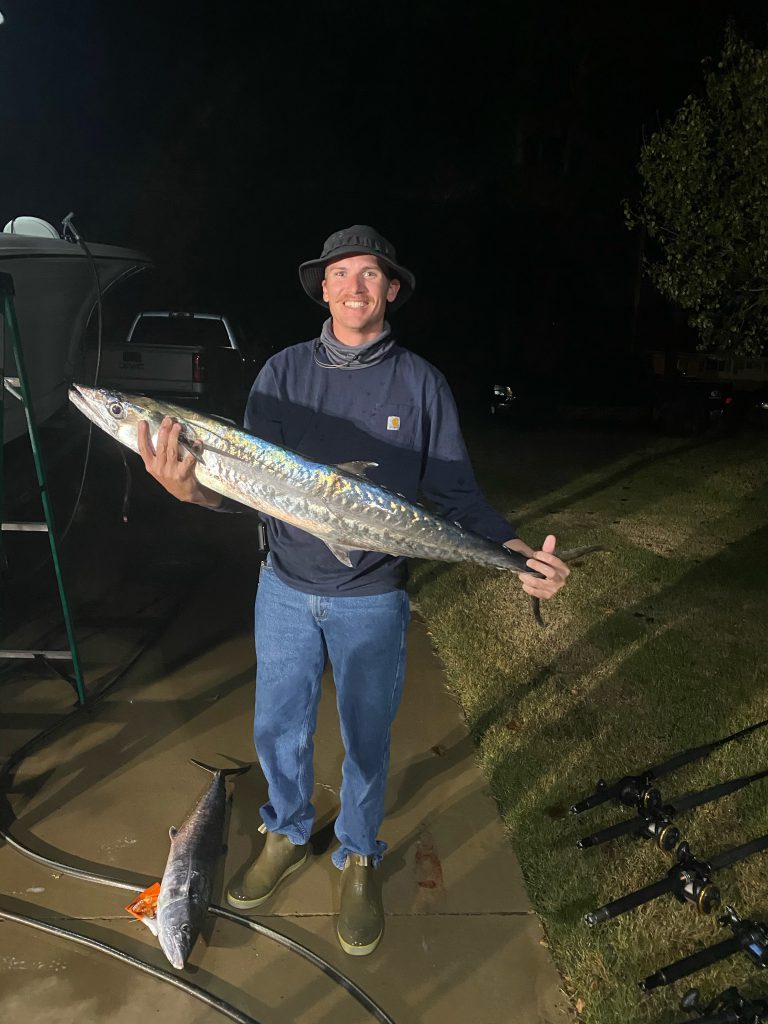 Bailey Watts, of Supply, with a king that was caught on a cigar minnow while fishing in about 80′ of water offshore out of Southport.

Lynn, of Ocean Crest Pier, reports that there have been quite a few bull red drum for anglers fishing large cut baits off the end of the pier.

Sharks and stingrays are showing up in better numbers, and both species are hitting the cut baits meant for reds.

Speckled trout are moving into the surf zone, and pier anglers are getting in on the action. A mix of artificial and bait shrimp are getting bites.

Fishing bottom rigs has produced pufferfish and spot, and whiting are around in good numbers, with the best action coming on days with a bit rougher weather.

Teresa, of Oak Island Pier, reports that whiting action has been great for anglers fishing with shrimp-tipped bottom rigs. A few croaker are mixed in the bottom fishing action.

Spanish mackerel are still breezing by the pier, though dropping water temperatures may not keep this bite around much longer.

Carolina-rigged cut mullet is producing red drum, and a few speckled trout are starting to show up, with early and late hours being the most successful.