Angie, of Dutchman Creek Bait and Tackle, reports that surf anglers have been catching good numbers of spanish mackerel and bluefish with casting jigs. Whiting are plentiful in the surf and actively feeding on cut shrimp, and red drum are being caught with Carolina-rigged cut mullet. Nearshore fishing has been focused on the great king mackerel and spanish mackerel fishing. Both species are alongside each other in areas from the beach out to the Same Ol’ and Shark Hole. 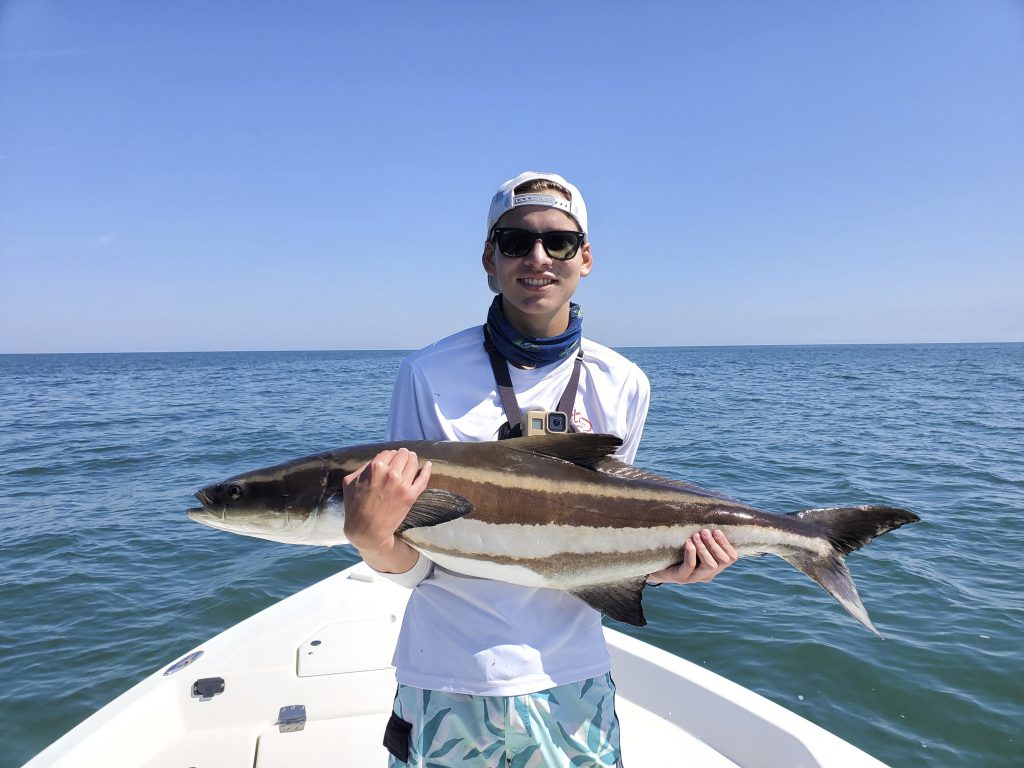 Davis Dow, of Greensboro, with a 45″ cobia caught on a white bucktail with a curly tail while fishing the Oak Island area.

Tim, of Wildlife Bait and Tackle, reports that offshore fishing has picked up a lot now that it’s getting deeper into fall. Blackfin tuna are around in good numbers, and they’re hitting cedar plugs well. Wahoo are being found in areas around the Steeples and the 100/400, with pulling high-speed Cowbells as the best tactic.

Grouper are mostly still deep (in the 50 mile range). They’re hitting dead baits and jigs. Large black sea bass are in these same areas for anglers fishing cut Boston mackerel and squid. King mackerel are pushed in from the beachfront out to 15 miles. Slow-trolling live pogies has been the top producing method. Large spanish mackerel are also around, and they’re striking live-lined finger mullet and Clarkspoons. When spotted feeding on the surface, it has been productive to cast Gotcha plugs to the schools.

Over-slot red drum are being caught around the nearshore wrecks and rocks with large cut baits and soft plastic jigs.

Bottom fishing around the river mouth out along the surf zone has been producing spot, croaker, and sea mullet. The top producing baits have been bloodworms, super redworms, and Fishbites bait strips.

Pompano are being caught in the surf zone with sand fleas and Fishbites on small Carolina rigs. A few catch and release flounder are in the surf and backwater areas, and the flatfish are hitting Carolina-rigged live baits. Red drum fishing has been very good in the backwaters. Anglers are having success with live baits and Z-Man or D.O.A. soft plastics.

Mark, of Angry Pelican Charters, reports that nearshore fishing has been on fire now that water temperatures have cooled off. Spanish mackerel are all over the shallow beachfronts and quickly striking Clarkspoons behind planers.

False albacore are feeding around the bait pods, and they’re being caught by anglers casting jigs to the surface-feeding schools.

King mackerel fishing has been great, with the kings pushed nearshore to feed on the bait. Slow trolling live menhaden is a top producing setup in these areas and could produce a stray cobia as they push through the area.

Ryan, of Fugitive Charters, reports that schools of mullet and pogies along the beach have signaled fall fishing is in full swing. Large spanish mackerel (3-5+ lbs.) are being caught with spoons and live bait.

King mackerel are feeding in the same beachfront areas on live pogies. Big sharks are also along the beach. The sharks are following the shrimp boats and are best hooked with live bait.

Out in the 20-30 mile range, king mackerel and scattered blackfin tuna are staged around areas of structure. Wahoo are pushed into the 30-40 mile range and are mixed in around the large kings and blackfin.

This nearshore/offshore action shouldn’t begin to taper off until water temperatures dip below 66-67 degrees. 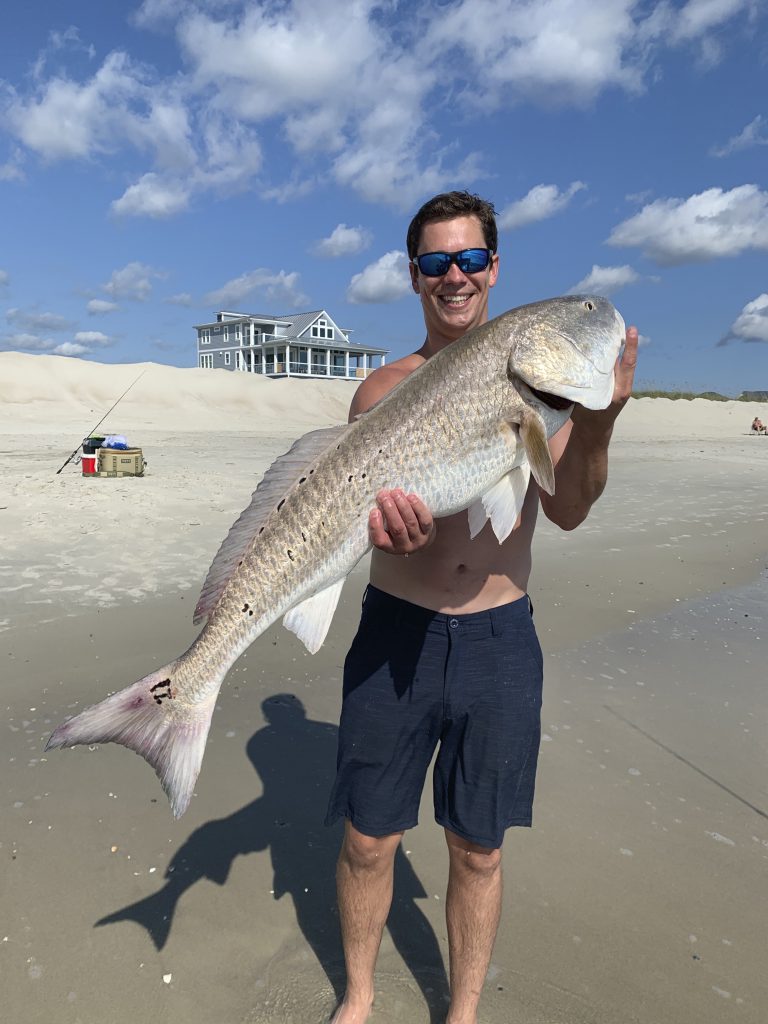 Rob Madon, of Bowling Green, KY, with a red drum caught on a mullet while fishing the surf in Oak Island.

Wally, of Oak Island Fishing Charters, reports that king mackerel fishing is in full swing, with some large fish mixed in. Water temperatures and the amount of bait is great along the coast, so anglers should look forward to this beachfront bite over the next month.

Inshore anglers have found good numbers of black drum while fishing shrimp in the mainland creeks.

Specked trout action is picking up, and anglers look forward to the bite breaking open. Target these fish with a variety of artificial lures worked along deep shoreline banks near oyster beds and creek channels.

Lynn, of Ocean Crest Pier, reports that spanish mackerel have been plentiful throughout the area. Anglers are getting action while casting glass minnow jigs and Gotcha plugs.

Bottom fishing with cut shrimp has been producing spot, and speckled trout have made a showing in the surf zone with most action being early and late in the day.

David, of Oak Island Pier, reports that spanish mackerel fishing has been great, with warm water temperatures keeping the schools around.

A few king mackerel are hitting live baits fished off the end, and bottom fishing has been producing sea mullet and a few spots.