Randy, of The Reel Outdoors, reports that surf fishing is slowly picking up as water temperatures crawl up from winter. Anglers are finding good numbers of puffers while fishing deep holes up and down the beach. Small hooks tipped with frozen shrimp has been the top producing setup.

Black drum are mixed in these same holes. Most have been smaller fish, but as water temperatures get closer to 60 degrees, more slot-sized fish should be mixed in.

Soundside anglers are focusing their efforts in mainland creeks for speckled trout. Due to mild temperatures this winter, anglers have been pleased to see the bite last throughout the past few months. These schools are still holding back in the creeks with the warmer water, but a few weeks of mild weather will start the push out. Soft plastics fished on very light jig heads and MirrOlures are both very successful for this type of fishing, and baits in general are best fished in deeper holes with a slow retrieve.

Mainland anglers have been reporting a good shad bite when fishing small grubs and shad rigs. Most of this fishery has been targeting the Upper Trent and Neuse River north of the area.

Brena, of Dudley’s Marina, reports that anglers had a great winter fishing for speckled trout throughout the area, and the fish are still being caught in the mainland creeks and up into the New River. Halo Shrimp have been popular in targeting the trout as they begin to move through the creeks.

Red drum are mixed in in the creeks and around the inlets. Soft plastics are the go-to bait for targeting the reds.

The future weeks should hopefully see the arrival of bluefish pushing into the inlets. These fish will be holding in the deeper channels and hitting casting jigs. 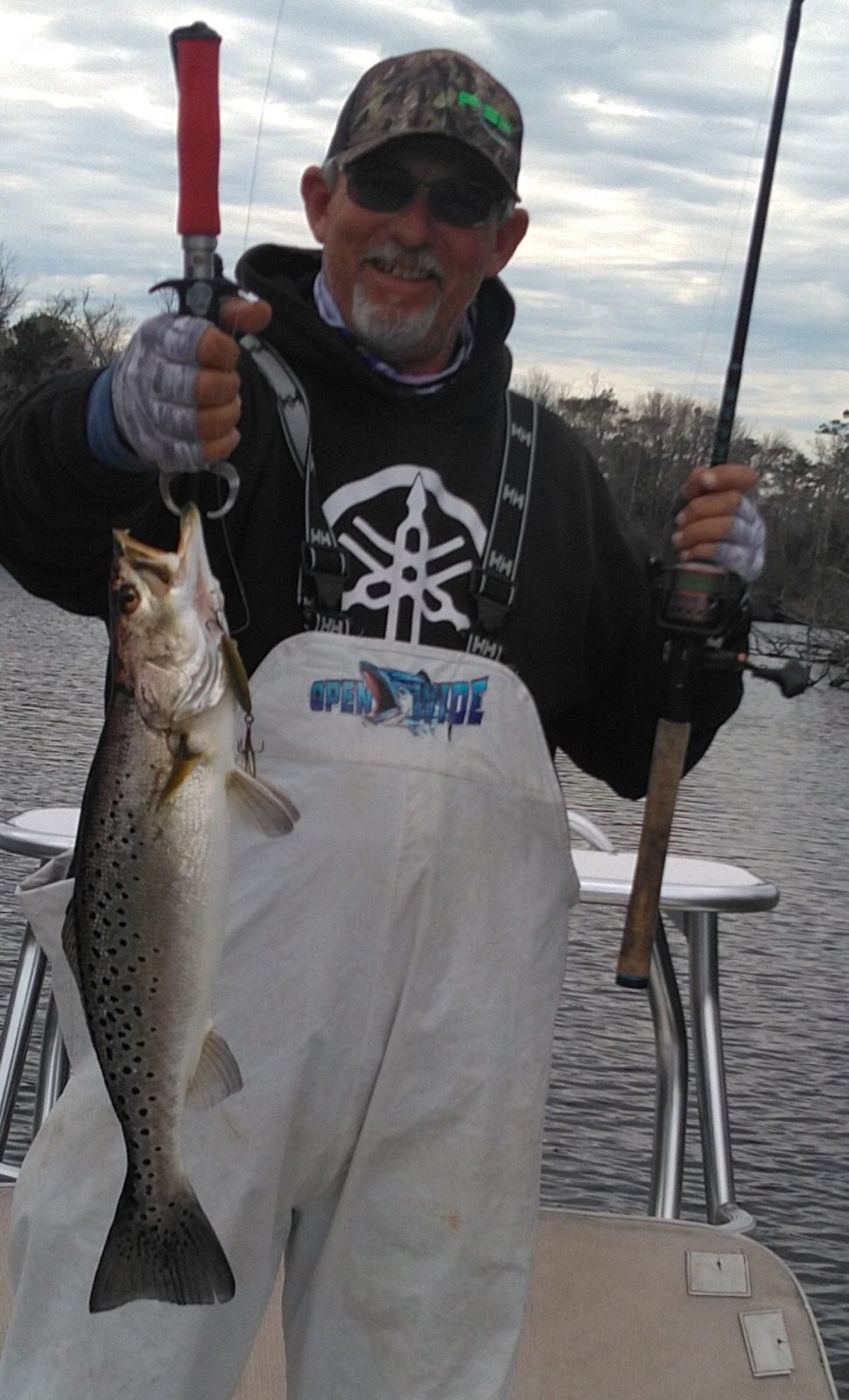 Ross Lapoint with a 22″ speckled trout that fell for a MR17. He was fishing the New River with Capt. John Parks, of Early Riser Charters.

Johnathan, of On Point Charters, reports that speckled trout fishing remains good in the mainland creeks off the ICW and creeks off the rivers. The trout have been hitting a variety of slow falling soft plastics and hard baits. The fluctuating temperatures have the bite finicky, and the fish seem to be picky with what they are hitting each day. As the water warms over the next few weeks, the trout will become more aggressive in their feeding habits and start to push out into the main river.

The winter redfish bite that anglers normally have has been a little off this year. There are some good days, but many slow ones. Most anglers are waiting for some steady weather to see if the fish push in from the surf zone.

Over the next few weeks, anglers will also be keeping an eye out for the arrival of the aggressive bluefish bite each spring. The blues tend to show up early to mid-April, and the mild weather could make them arrive on the earlier side this year. Once in the area, they will be stacked up in channels and near the inlets hitting any lures or baits thrown in front of them.

John, of Early Riser Charters, reports that speckled trout and red drum fishing have been good all winter, with the warming weather only ramping action up.

Speckled trout have been holding in the creeks off the New River, but recent changes in water temperatures have the fish pushing out of their winter-time haunts headed towards the main river. Topwater plugs have been getting great action, with favorites being Top Pups and Rapala Skitterwalks.

Red drum are schooled up in the marshes around the area’s inlets. The reds have been very weather dependent, with the warmer days having the fish more willing to feed. Most of the time, they are holding in shallow bays, where connecting with the bottom will only leave anglers with hooks full of muck. MirrOlure MR27s and sub-walker suspending lures help avoid this situation. Soft plastics do still get action, though, and work better when paired with a little scent.

Josh, of Liquid Fire Sportfishing, reports that bottom fishing has been good over offshore structure and ledges. Anglers targeting the 85-125’ depths are finding large black sea bass and good numbers of triggerfish. Some vermillion snapper are mixed in the counts, and all three species are hitting cut baits.

A few wahoo are being caught out towards the Swansboro Hole. There isn’t yet a wide open bite, but anglers braving the wind are coming home with a few fish.

Blackfin tuna are holding on these same offshore temperature breaks.

Teresa, of Bogue Inlet Pier, reports that those bottom fishing are finding double-digits of blow toads hitting shrimp. The blow toad bite should only get better with the stable and warming weather conditions.

Some good-sized sea mullet are in the mix, and they’re hitting the same bottom-rigged baits.

With water temperatures currently around 55 degrees, a good push of fish is only a couple ticks away. The 60 degree mark has always been great for seeing wide open sea mullet fishing and (hopefully) bluefish coming in from offshore.