Randy, of The Reel Outdoors, reports that speckled trout are showing up in the surf zone. The action isn’t exactly wide open, but it should continue to pick up as water temperatures drop.

Anglers fishing sand fleas and shrimp in the deeper troughs have landed a few sheepshead, and Carolina-rigged cut mullet has been producing some slot-sized red drum.

Bottom rigs tipped with shrimp have been the best producing setup now that water temperatures are falling. A variety of large sea mullet, pufferfish, black drum, and bluefish are all being landed from the sand.

Inshore action has been focused around the speckled trout bite. The fishing has been a bit spotty, but the specks are now and will remain to be the main inshore target deep into the winter. 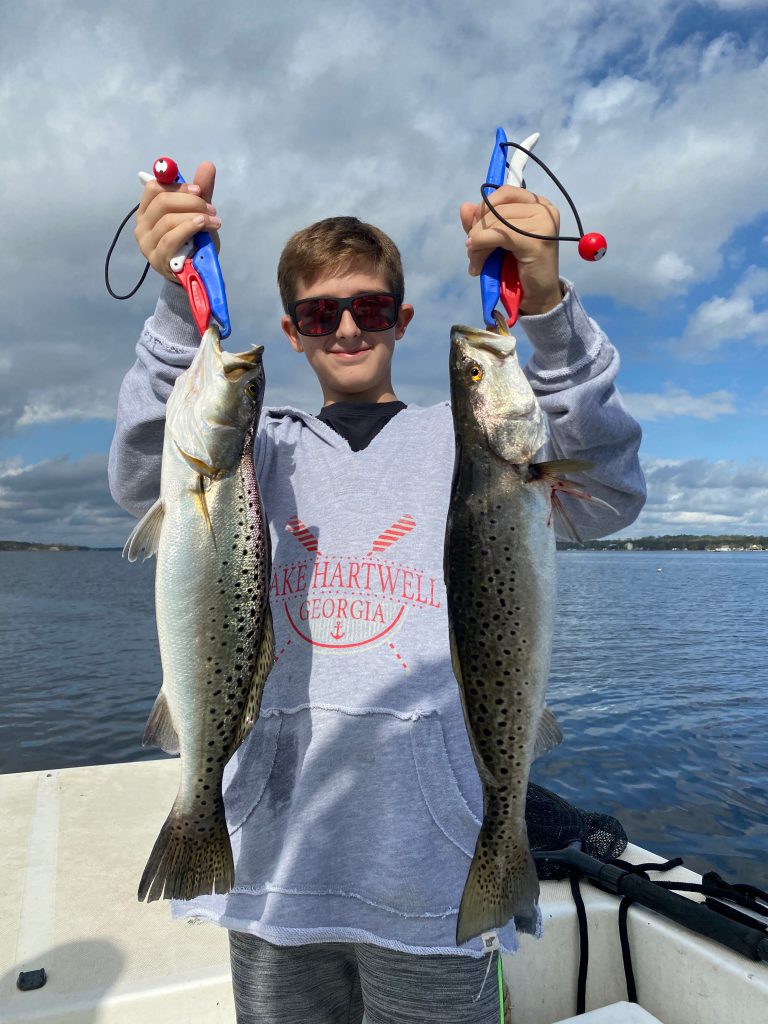 Dylan Friesen, of Winterville, with a pair of speckled trout caught on Zoom flukes in the White Oak River. He was fishing with Capt. Rob Koraly of Sandbar Safari Charters.

Kayla, of Dudley’s Marina, reports that speckled trout have been the main target for anglers fishing the sounds. These schools are staged up along deeper grass banks and creek points out towards the inlet. A wide variety of live and artificial lures are getting strikes.

Good-sized puppy drum are schooling up around the inlets, with Carolina-rigged cut baits being a top setup.

Deeper holes from the inlet out along the surf zone are holding some spot.

As the winter months settle in, anglers will be targeting speckled trout in the mainland creeks. The bite can be very sluggish, which requires slow moving soft plastics and twitch baits (such as MirrOlures).

Rob, of Sandbar Safari Charters, reports that speckled trout are starting their seasonal push into mainland creeks and rivers. Zoom Flukes and similar soft plastics have worked great, with darker colors being best in the creeks. Live finger mullet or shrimp have been the hot baits and are a great choice as long as they are available.

Red drum are around in large groups from the marshes to the inlets. A wide variety of sizes (from puppies to over-slot reds) are in these schools. As the winter moves in, these reds will move into the surf zone where days with north winds and clear conditions provide some great sight-fishing action. The standard 4” white Gulp soft plastics work well for these fish.

Some smaller redfish are back in the creeks, and they’re feeding on cut shrimp.

A few schools of false albacore are in the area, and they’re hitting Stingsilvers.

Johnathan, of On Point Charters, reports that nearshore anglers are finding false albacore from the beaches out to 5 miles. These surface-feeding schools are hitting small, flashy casting jigs.

Red drum are schooled up in the surf zone and hitting Gulp soft plastics.

Speckled trout have moved to creeks off the rivers and ICW as a result of water temperatures cooling off. Soft plastics on lighter jig heads are a great search bait, with live shrimp and mud minnows getting most of the strikes.

John, of Early Riser Fishing Charters, reports that sailfish action has been great for anglers making the run out to the break. Having as many as five fish landed hasn’t been a rare sight and is a great addition to their strong showing in general this year.

Wahoo action has been good in the same areas, and the wahoo bite only picks up as cooler temperatures settle in over the coming months.

Closer to the beaches, king mackerel are holding over structure in the 5-10 mile range. Both live and dead bait rigs are successful, with the latter being most popular due to a shortage of bait around.

Large cobia (up to 50 lbs.) are being caught alongside the kings.

As we move further into wintertime, chasing speckled trout will require heading up mainland creeks and fishing deeper holes and nearby flats. Anglers should not be surprised with the number of larger, citation-class trout caught in the colder months.

Red drum action is great for those looking to sight-cast at large schools that travel from the inlets out along the surf zone. The water gets crystal clear and is key to locating these fish on calmer days.

Bluefin tuna can also make a showing anywhere from the end of the year into early February. This fishing does require particular heavy-duty tackle and expertise, but it’s a great fishery for NC. 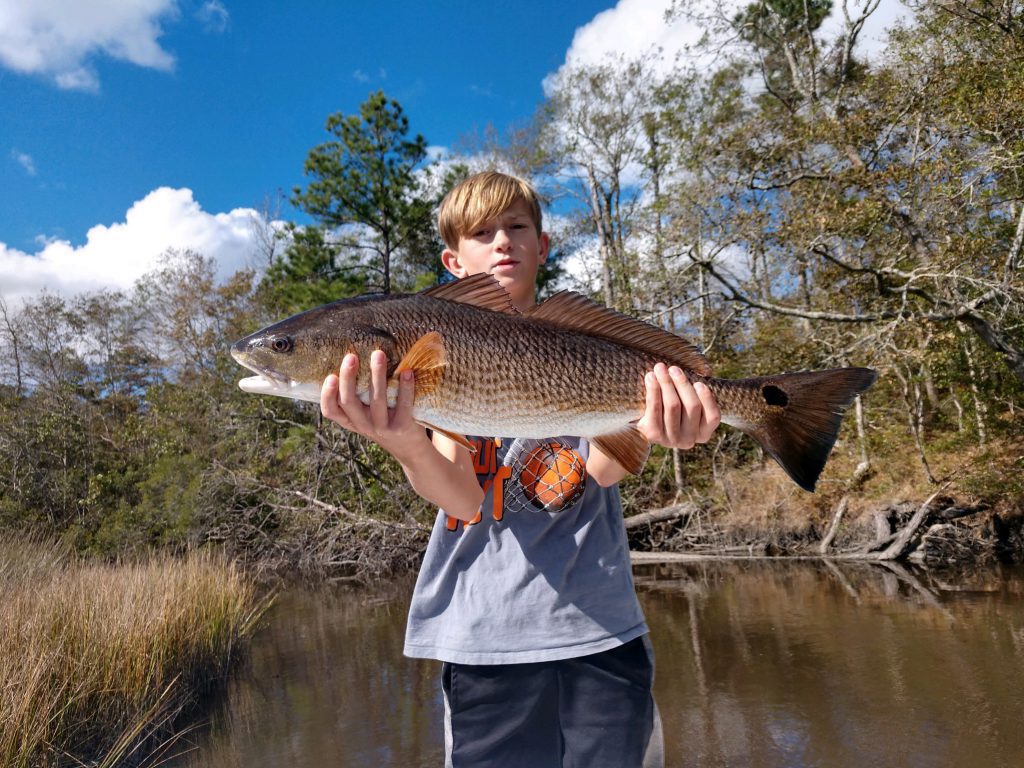 Luke Bledsoe (age 11) caught this 25″ red drum on a home-made rig while fishing in a small creek on Parrot Swamp.

Josh, of Liquid Fire Sportfishing, reports that king mackerel fishing has been great on the east side of Cape Lookout. As long as water temperatures hold, anglers can look forward to this action until the middle of the month. This year has seen a great class of fish, with catches up to 60 lbs.

Closer to New River, the sea buoys are holding smaller schoolie-sized kings (up to 20 lbs.).

Bottom fishing has been great, with plenty of grouper action. This bite is expected until the season closes at the end of the year.

Triggerfish will be holding deep, but anglers can target them and large black sea bass over structure into next year.

Wahoo action has been steady out around the Swansboro Hole, and it gets even better as the winter moves along.

Bluefin tuna could make a showing anytime from now until mid-January. These giants will be nearshore and located mainly by following birds and bait.

Teresa, of Bogue Inlet Pier, reports that false albacore have been a great bonus for anglers sight-casting glass minnow jigs.

Bottom fishing has picked up drastically now that waters have cooled closer to typical late fall levels. Sea mullet, black drum, pufferfish, and speckled trout are all hitting bait shrimp. Some of the better black drum and trout are coming from closer to the breakers.

Sheepshead, gray trout, and croakers are also in the mix for those with bottom rigs. With hopefully more of this mild weather in the future, anglers look forward to this great fishing lasting through the end of the year.