Randy, of The Reel Outdoors, reports that king mackerel fishing has been great from the beaches out to 8 miles. A variety of live and cut baits are producing multiple hookups. In the surf, anglers are catching sea mullet and spot while fishing baits in troughs just off the sand. Bluefish are also inside the sandbars, and they’re hitting casting jigs and bottom-rigged baits.

Inshore anglers are finding good numbers of red drum still feeding on all the live bait hanging around.

Speckled trout are starting to show up, with many still finding water temperatures a bit high.

Over the next few weeks, this bite will be the focus of anglers as they target deeper channels and ledges near oysters with a variety of baits. 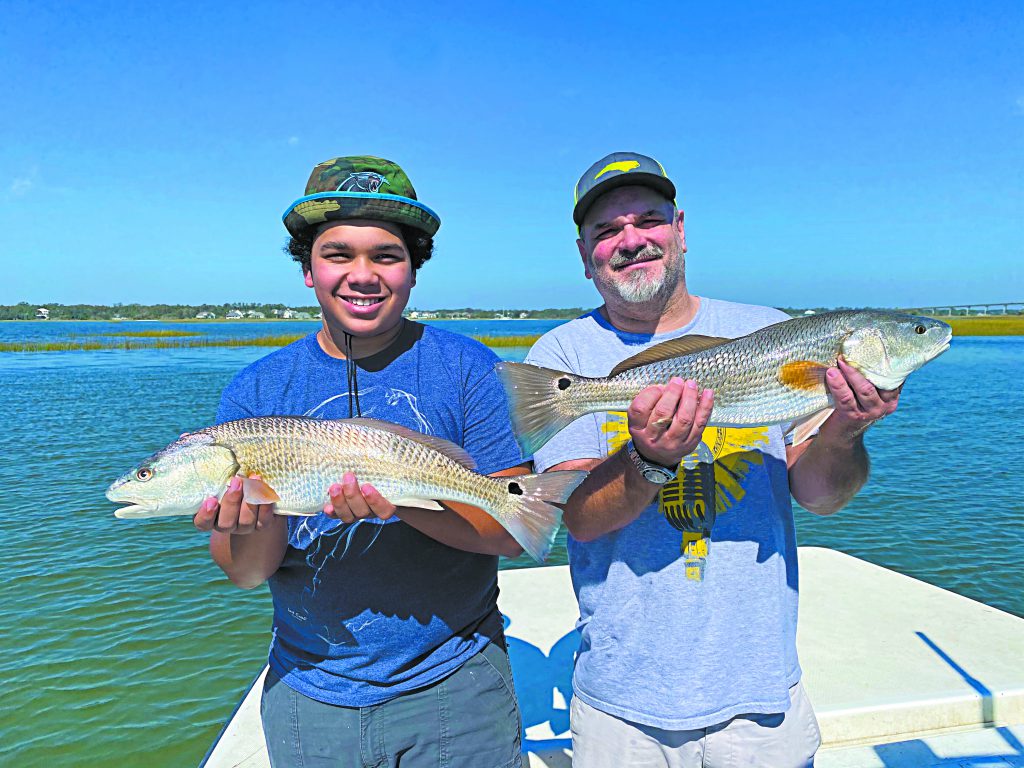 Robbie Jones and his son Jaiden, both from Swansboro, with a double redfish hookup on live mullets on a flat near Emerald Isle. They were fishing with Capt. Rob Koraly of Sandbar Safari Charters.

Dale, of Dudley’s Marina, reports that anglers fishing the beachfront are finding good numbers of spanish and king mackerel. With water temperatures still warm, this bite should last a couple more weeks.

Inshore anglers are finding spot in deeper holes around Swansboro.

Speckled trout fishing is beginning to fire off, with cooling temperatures only helping to move the bite forward. Many anglers are finding trout from the surf zone back into deeper channels and grass banks of the mainland creeks. As the temperatures drop, this shift toward the creeks will be the better zone. The trout will start aggressively feeding, and this will lead to success from live shrimp, soft plastics, and suspending lures.

Rob, of Sandbar Safari Charters, reports that inshore fishing has been getting into its fall swing, with most species being very active.

Red drum are being caught from the inlets back into the ICW. Anglers are getting strikes on live baits, topwater plugs, and soft plastics.

A few flounder (released) are hitting these live baits and soft plastics worked along the deeper bottoms.

Speckled trout are in the area, but this is the one species not quite wide open. The trout are still a bit scattered, and anglers anticipate a slight temperature change pushing these fish into their fall schooling patterns.

Sheepshead and black drum are hitting shrimp fished around docks and bridges.

Bluefish and spanish mackerel are being caught from the inlets out along the beaches. There has been great action for anglers casting jigs at the frenzied schools.

Johnathan, of On Point Charters, reports that inshore anglers are seeing a great variety of flounder, speckled trout, and red drum. All three species have been coming from deeper creeks around the inlets as they transition in and out of the ocean with cooler water temperatures.

White-colored Gulp shrimp on Fathom jig heads have been a top producing setup for all inshore targets.

Nearshore anglers have seen good king mackerel fishing while working nearshore structure out to 10 miles. Live menhaden on king rigs have been getting strikes. Schools of false albacore and spanish mackerel are actively hitting Clarkspoons and similar small and flashy casting jigs.

John, of Early Riser Fishing Charters, reports that the end of October saw the fall bite move into full swing. Red drum are starting to school up, and the topwater bite has been as good as it gets.

Speckled trout fishing has been hit or miss as they change their pattern. Over the next few weeks, a couple of cold fronts should break the trout action wide open. Target the specks with topwater plugs, MirrOlures, and live shrimp.

King mackerel are everywhere, with a lot of big fish pushed along the beach. This bite will stay strong until the water cools and the kings push back out to nearshore rock structures.

Live-baiting trips have been producing a few cobia as they push back through the area.

Out at the break, wahoo and blackfin tuna fishing has been very good. The hardest part has been catching the weather to make a run. 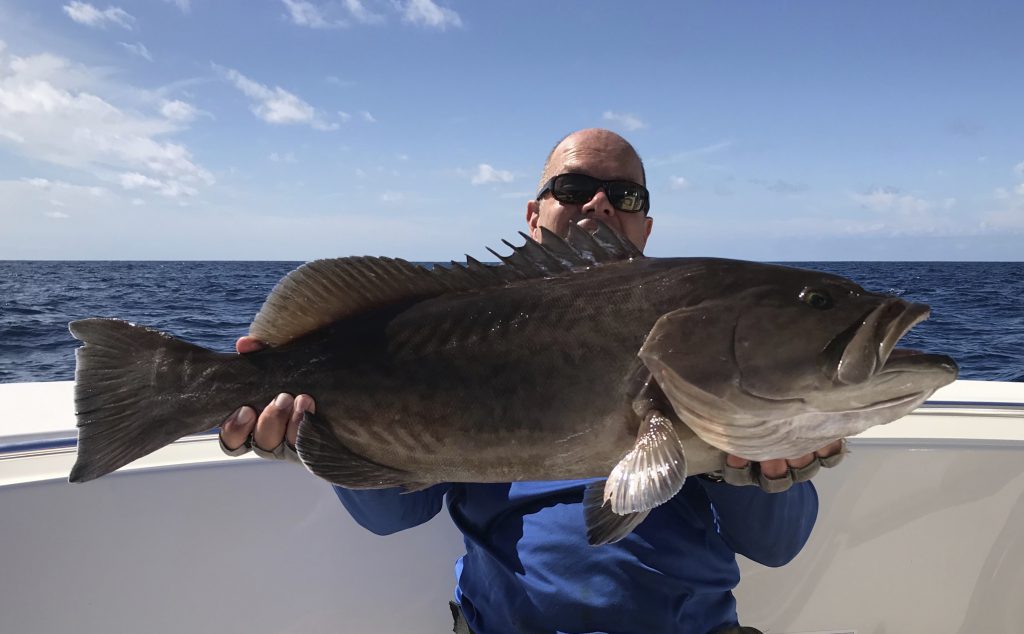 Mike Edwards, of Surf City, with a gag grouper caught on live bait while fishing 20 miles off Topsail Island.

Josh, of Liquid Fire Sportfishing, reports that king mackerel season is in full swing and the fish are in all the places they are supposed to be. From the beachfront out to 20 miles, kings are holding over ledges and rocks holding bait and hitting anything from live bait to skirted dead bait rigs. With water temperatures still warm, this bite should continue to be strong into November.

Out around and just inside the break, anglers are finding a good blackfin tuna bite.

Wahoo fishing has been steady, but anglers look forward to water temperatures dropping just a little more in order to form a good break for the fish to congregate on.

Teresa, of Bogue Inlet Pier, reports that the false albacore bite has been great, with plenty of 6 lb. class fish hitting jigs.

Spanish mackerel and a few bluefish are also hitting casting jigs/plugs thrown towards the surface-feeding schools.

Gray trout and black drum are feeding on fresh shrimp fished on the bottom, and bottom rigs have been producing sea mullet and spot. Some good-sized puppy drum (up to 5.1 lbs.) are being landed with cut finger mullet.