Colin, of East Coast Sports, reports that surf anglers have been enjoying great whiting action with fresh bloodworms. A few scattered spot have also been hitting the bottom rigs, though there hasn’t been much of a spot “run,” and black and slot-sized red drum are feeding on bait shrimp.

Sound-side anglers are finding action while targeting speckled trout. With water temperatures just starting to really cool down, anglers look for the action to pick up over the next few weeks.

The nearshore range from 12-25 miles has been producing some good king mackerel action. These kings will continue to hit the live and dead bait setups until water temperatures drop too far into the 60s.

Grouper fishing has been solid in this nearshore range, as cooler temperatures bring them into these closer rocks and ledges.

Trips to the Stream are producing wahoo, and these fish will be gathered over structure near the temperature breaks and stay active over the next few months.

A run of bluefin tuna could push into the area anywhere from the middle of December into February. These giants will run just a few miles off the beach, and horse ballyhoo is the best bet to entice a bite.

Speckled trout fishing is very popular among the cold weather anglers. These trout are currently making a showing in the surf and creek mouths, and as temperatures dip, the action moves into deep holes at the back of mainland creeks. Bait retrieval speeds vary from slow to slower in order to entice a strike. 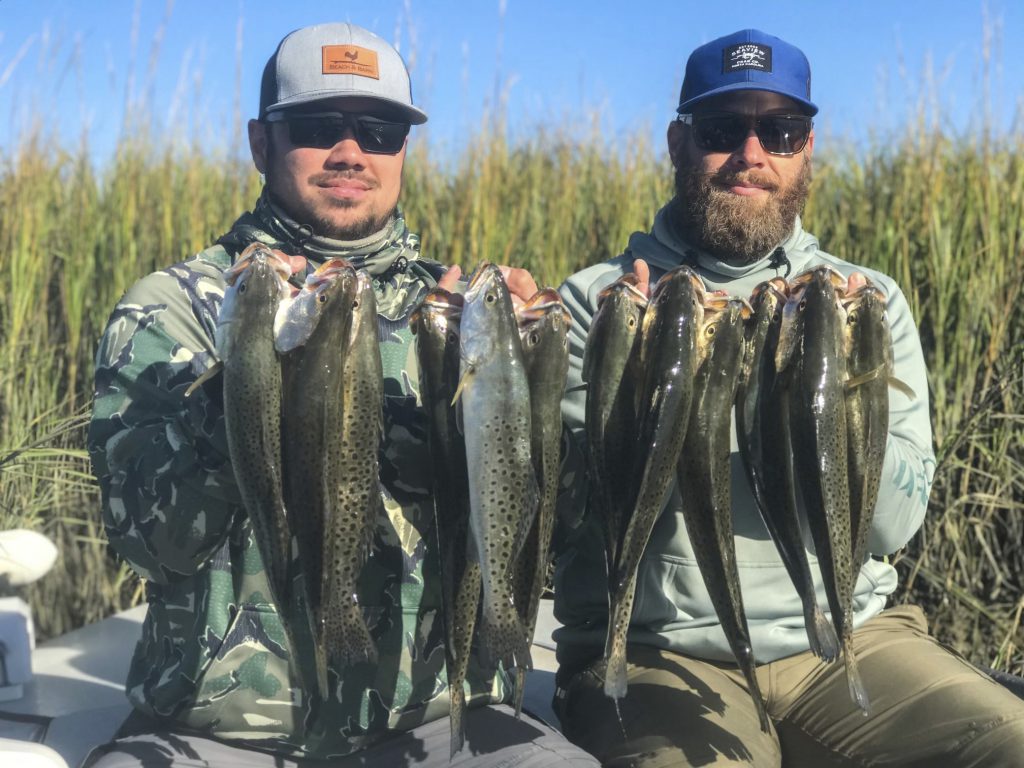 Jason Bond (left) and Brandon Lutz with a two-man limit of speckled trout. The fish fell for DOA red flake shrimp in the Topsail area.

Mike, of Native Son Guide Service, reports that speckled trout have been a bit scattered but are showing in better numbers almost daily. A good number of smaller trout have been the recent action, and this tends to signal that trout fishing is headed into full swing. It’s key to target these schools in deeper holes from the ICW back into mainland creeks.

A variety of MirrOlure MR-17s, Z-Man MinnowZ, and Z-Man shrimp have all been producing strikes. Try a few different lures before giving up on a spot, as many times the trout are waiting for the right bait to feed on.

Red drum are starting to gather into their large winter-time schools now that the bait has moved out. Z-Man jerk shads and Z-Man PaddlerZ are two great baits for working these fish, which sometimes require a dead-sticking action to get the strike. Keeping cut bait and shrimp nearby is not a bad idea for the reds, as scent could snap them feeding.

Ray, of Spring Tide Guide Service, reports that speckled trout fishing has started off slower than in past years. This can perhaps be a great sign for a long season, as warm water temperatures haven’t pushed many trout back into the creeks. When targeting trout, it’s beneficial to throw Saltwater Assassin soft plastics and Blue Water Candy jig heads. Another great method is drifting corks with Vudu or Storm shrimp underneath. Then as the water cools, anglers prefer the suspending lures.

Targeting docks along the ICW into mainland creeks has been producing red drum.

John, of One More Cast Fishing Adventures, reports that inshore fishing has been great for both speckled trout and red drum, as the water temperatures finally got to a point that have the trout moving and feeding.

Anglers are targeting creeks and creek mouths as it gets into the cooler months. These fish are following this inshore push of bait and will hold up in these spots all winter. Twitch baits, such as MirrOlure MR-17s, are a go-to lure when not getting action on soft plastic swimbaits.

As the winter settles in, these trout get sluggish and will need to be targeted with slow presentations. MirrOlures, Z-Man Trout Tricks, Betts Perfect Sinker shrimp, and Storm shrimp will all be productive when used in a slower retrieve.

Red drum basically follow the complete opposite pattern. A few resident redfish will be holding in these creeks alongside trout, but for the most part they are off the ICW or back and forth between inshore and surf zones.

Stealth is the name of the game when targeting these backwater redfish, as they will spook easy in the shallow, clear waters. Target these schools with swimbaits and Betts or Storm shrimp.

Jim, of Plan 9 Charters, reports that the king mackerel bite has been red hot. Plenty of active 10-20 lb. kings are striking at ballyhoo on dead bait rigs in 50-70’ of water. Getting baits deep with a downrigger has been huge in raising the amount of strikes.

Grouper, black sea bass, snapper, and grunts are actively feeding as well. Fishing cut baits on the small ledges from 70-100’ has been best.

As the winter months move closer and when there is a window of good weather, anglers can head off the beach for good black sea bass and snapper action at the reefs.

Robbie, of Jolly Roger Pier, reports that bottom fishing anglers are having great action on sea mullet.  Good-sized pompano (up to 4 lbs.), puffers, and a few spot are mixed in. Spot in particular have been feeding best in the mornings.

Though water temperatures are on the fall, anglers are landing a few bluefish with casting plugs and bottom-rigged baits.

Speckled trout are showing up in holes closer to the breakers.

Through the end of the year, anglers will be focusing their efforts on the great sea mullet fishing, as well as speckled trout. 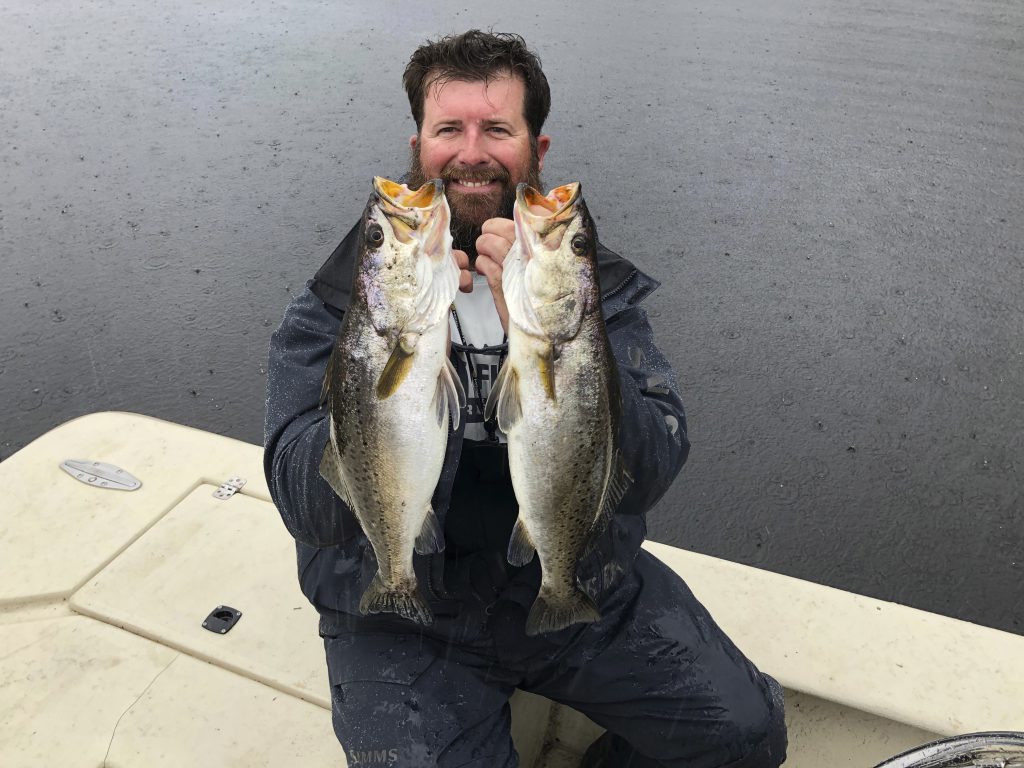 Capt. John Tedder, of One More Cast Charters, caught this pair of 23″ trout on a Halo shad while fishing a creek off the New River.

Vinita, of Surf City Pier, reports that sea mullet are being landed in good numbers. Pompano, speckled trout, and a few spot are mixed in with the bottom fishing action.

A few keeper black drum are being caught with bait shrimp.

Scattered numbers of bluefish have been breezing by the pier and hitting casting jigs or, when not actively feeding on the surface, bottom-rigged baits

Tyler, of Seaview Pier, reports that bottom fishing has been very good, with mixed catches of sea mullet, spot, and pufferfish. Shrimp has been the top bait for all three species.

A few good-sized black drum (up to 6 lbs.) are hitting bottom-rigged shrimp.

Red drum are pushed out of the inlets and are being caught in better numbers with cut bait.

Speckled trout action has begun to pick up as water temperatures cool. Fishing early and late has helped with bite numbers.