Don, of East Coast Sports, reports that surf anglers are beginning to see a push of sea mullet into the area. Frozen shrimp and Fishbites bait strips are having success when worked in deeper troughs between the sandbars.

Skates are still in the mix for anglers fishing shrimp or cut bait on bottom rigs.

Inshore anglers saw a great winter for speckled trout due to the temperatures staying mild. Anglers are currently targeting the specks in the backs of creeks and canals with hard plastic suspending baits, such as MirrOlures and Rapalas. Water temperatures have still been cool enough where the slow retrieve has been best. Over the next couple weeks, steady weather should bring enough change to see topwater action in the shallows of these same creeks.

There have been more reports of redfish, as the weather has allowed anglers to scout around the inlets for them. The reds are stacked up in large schools, and once found, they are hitting hard baits such as the Rapala X-Raps. Other favorite baits have been chicken-on-a-chain and white Gulp, Z-Man, and Wiseguy’s Tackle soft baits. Keeping jig heads muck-free has been a daunting task for anglers, but Blue Water Candy jig heads are still extremely popular with the local crowd.

The coming weeks should see a similar pattern in the fish, with weather being the biggest factor. A stretch of nice, sunny days is important for anglers looking to capitalize their time off with a successful trip.

Ray, of Spring Tide Guide Service, reports that speckled trout fishing has been very good. Targeting fish in the upper holes of area creeks has been the best tactic over the past few weeks. Once finding a deeper hole, casting Bass Assassin baits paired with lighter jig heads (1/16 oz.) has been more successful. With water temperatures now up over 56 degrees, anglers are seeing a great topwater bite in the area. Heddon Spooks are always a favorite bait for anglers looking for surface action.

Red drum are schooled up on the shallows behind the inlet, and anglers are having the most success finding the fish on warmer days as the reds search these flats for food. Soft plastics with Pro-Cure scents work great when coming upon one of these large groups of fish. 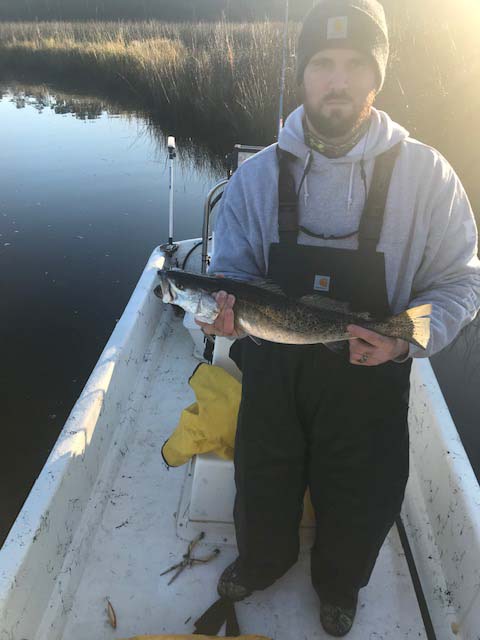 Lance Horne, of Richlands, NC, with a 4 lb. trout caught near New River.

Chadwick, of South End Anglers, reports that the inshore speckled trout bite is going strong. The fish are still holding in deeper holes back in mainland creeks, boat basins, marinas, and canals around Topsail Island. During warming trends, the fish are pulling out of the deeper zones and moving up onto the edges of flats and shallower areas within the creeks.

Redfish are holding throughout the Topsail Island marshes. Oyster beds, creeks, flats, docks, and back in the creeks are all holding fish right now. Pro-Cure scented soft plastics retrieved slowly along the bottom has been the top technique. Bait anglers are having success with Carolina-rigged fresh cut blue crab and shrimp.

Nearshore structure is holding good numbers of black sea bass, porgies, and the occasional tautog. Cut squid and metal jigs fished on or near the bottom are getting plenty of bites.

There have been some chopper blues and false albacore showing up recently. Hogy Heavy and Epoxy Minnows and working well, with the key being to let the jig fall down into the depth where the fish are holding. Trolling Yo-Zuri deep diving plugs is also getting bites.

John, of One More Cast Fishing Adventures, reports that mild winter temperatures has led to great red drum and speckled trout fishing in the area. Anglers are finding fish from the upper reaches of the river out to the beach. Keeping an eye out for bait working down shallow banks to ledges has been key in finding hungry fish. Soft plastics and twitchbaits (such as MirrOlures) have been most productive in getting bites. Topwater plugs have also been getting action for those out fishing at first light and dusk. A slow and steady retrieve has been best for anglers looking for that blow up.

Over the next few weeks, anglers will be looking out for the nearshore bonito bite that shows up off Topsail beaches. Casting metal jigs and trolling spoons are both effective methods to landing a few fish. It is important to be cautious of boat placement, as running too close or through the schools will push the fish deep.

Jim, of Plan 9 Charters, reports that bottom fishing has been great around structure in the 70-90’ depth range. Large black sea bass and vermillion snapper have been hitting both cut squid and minnows well. Anglers looking for a larger fish are having more success with jigs (rather than bait fishing), though. Fishing ledges closer to shore has been producing smaller black sea bass and tautog.

False albacore are holding in the 60’ depth range, and they’re feeding on schools of bait as they work towards the beach. These fish can be very finicky, so stealth is extremely important (and good practice for getting into the upcoming sight-casting season).

Atlantic bonito are out in the 20 mile range, and the same stealthy approach is important when targeting these fish as well.

Robin, of Jolly Roger Pier, reports that fishing has been a bit slow, with water temperatures still hovering in the low to mid 50s.

Puffers are being caught by anglers using shrimp and Fishbites strips around the midway point of the pier. Smaller hooks on the bottom rigs has really helped with hook-up rates.

There are some sea mullet in the area, and just a little jump in temperature should see better numbers of fish arriving shortly.

Vinita, of Surf City Pier, reports that anglers are having success landing good-sized sea mullet while fishing shrimp on bottom rigs. These fish have just begun to arrive, and if weather holds, the next couple of weeks could see a great run.

Puffers are mixed in the counts, with some tide cycles seeing good numbers around the pier. Fishbites strips, squid, and shrimp all get bites, with the right times seeing the puffers come over the rails two at a time.

Fishing Carolina-rigged cut baits has been landing dogfish sharks. They put up a great fight for those anglers looking to pull on something larger.

Tyler, of Seaview Pier, reports that sea mullet are showing up around the pier and anglers only anticipate the bite getting better as water temperatures creep higher. The classic two-hook bottom rig has had the most success when paired with shrimp or Fishbites bait strips.

Pufferfish are also mixed in the daily catches, and they’re hitting the same bait setups.

The next few weeks should see an influx of fish pushing in from offshore. These first few waves of fish can be very tide dependent, so figuring out their pattern becomes key for local anglers.