Don, of East Coast Sports, reports that surf fishing has been very good, with bait now flushing out of the inlets and staged along the beachfront. The bait has the spanish mackerel in close and hitting glass minnow jigs.

Slot-sized red drum are feeding on Carolina-rigged cut finger mullet, and bottom rigs with shrimp or bloodworms are producing sea mullet and spot. The occasional black drum is mixed in with the bottom fish, with most action coming on fresh bait shrimp.

Anglers just off the beach are trolling spoons to get strikes from the large schools of spanish mackerel around, but live bait has been producing larger spanish and king mackerel along the beaches.

In the 12-15 mile range, anglers are catching plenty of larger kings on live or dead bait on skirted rigs. 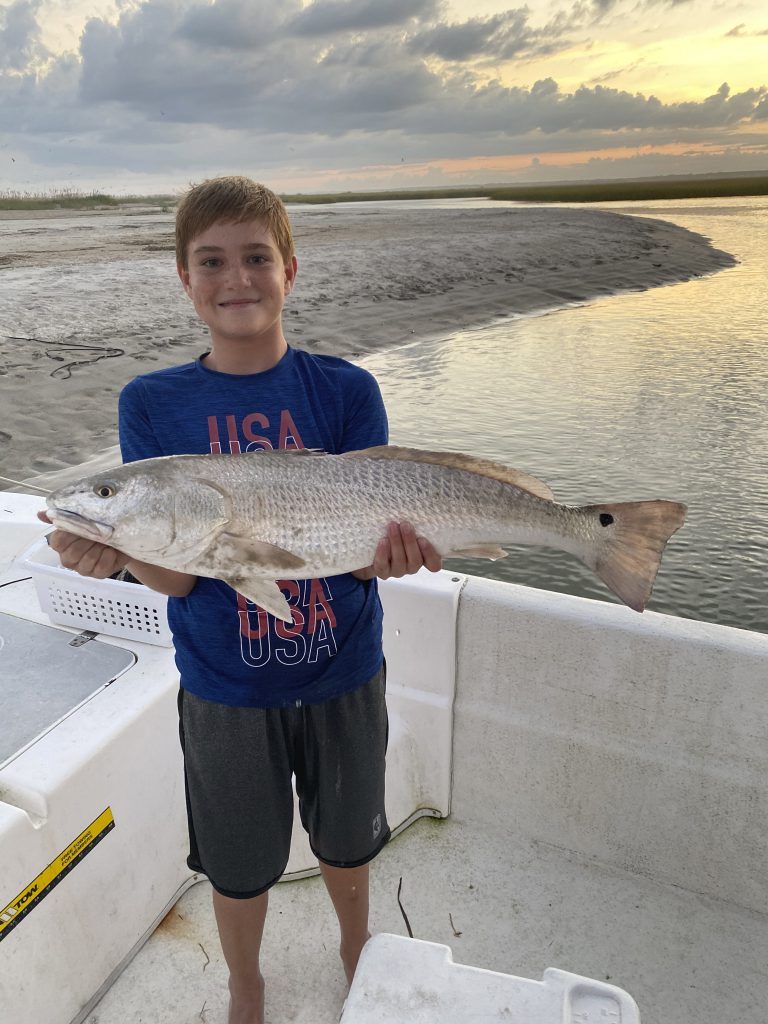 Ryan Strickland with a 7.95 lb. redfish that fell for a live mullet while fishing the surf on Lea Island.

False albacore are holding out in the 30-40’ range, and they’re also hitting diamond jigs.

Speckled trout action has been spotty, with water temperatures just a bit too warm. Over the next few weeks, look for the trout to transition into their fall schooling patterns.

Catch and release flounder have been common with so much bait still inshore. The redfish bite has been very good, too, and it only gets better as the fish school up going into November.

Ray, of Spring Tide Guide Service, reports that anglers are looking forward to weather changes to kick the speckled trout bite into high gear. A few scattered fish are being caught around the inlets and up in the river, but a slight temperature drop will push these fish into larger groups. In the meantime, targeting these trout on higher slack tides early and late has been most productive.

Red drum are being caught in the river with gold spoons and soft plastics. Anglers have found a majority of the reds pushed into the inlets and corresponding shoals.

Spanish mackerel (up to 3+ lbs.) have been thick and are staged from the inlets out to nearshore structure. Trolling spoons and casting Big Nic Spanish Candies have produced most of the strikes.

John, of One More Cast Fishing Adventures, reports that spanish mackerel action has been great.

A good-sized class of fish are actively striking Clarkspoons under #1 and #2 planers, and trying to match spoon color to baitfish has been extremely productive in catch numbers.

The larger spanish have been hitting dead baits trolled over nearshore reefs. When possible, live baits either drifted or trolled will easily get strikes.

The king mackerel bite has been very rewarding, with anglers finding citation-class fish in the 60-80’ depths. These kings are hitting a variety of live pogies, as well as dead baits on Blue Water Candy and Big Nic rigs. Keeping speeds that hold baits straight and not spinning is key.

Anglers fishing the break are seeing action from wahoo and blackfin tuna. Trolling medium to large ballyhoo on skirts will prompt strikes from all the offshore species.

Jim, of Plan 9 Charters, reports that king mackerel fishing has been awesome and conditions should see this bite last into November. Slow trolling dead cigar minnows in the 10-20 mile range has been producing most of the larger fish.

Spanish mackerel are still holding along the beachfront. These schools should stick around until water temperatures dip into the 60s.

False albacore and bluefish are feeding alongside the spanish, with all three species being caught with small, flashy casting jigs.

Bottom fishing for black sea bass, grouper, and snapper will be very good until the end of the year. Target these species in the 70-100’ range with cut squid, minnows, and jigs (for when the fish are finicky). 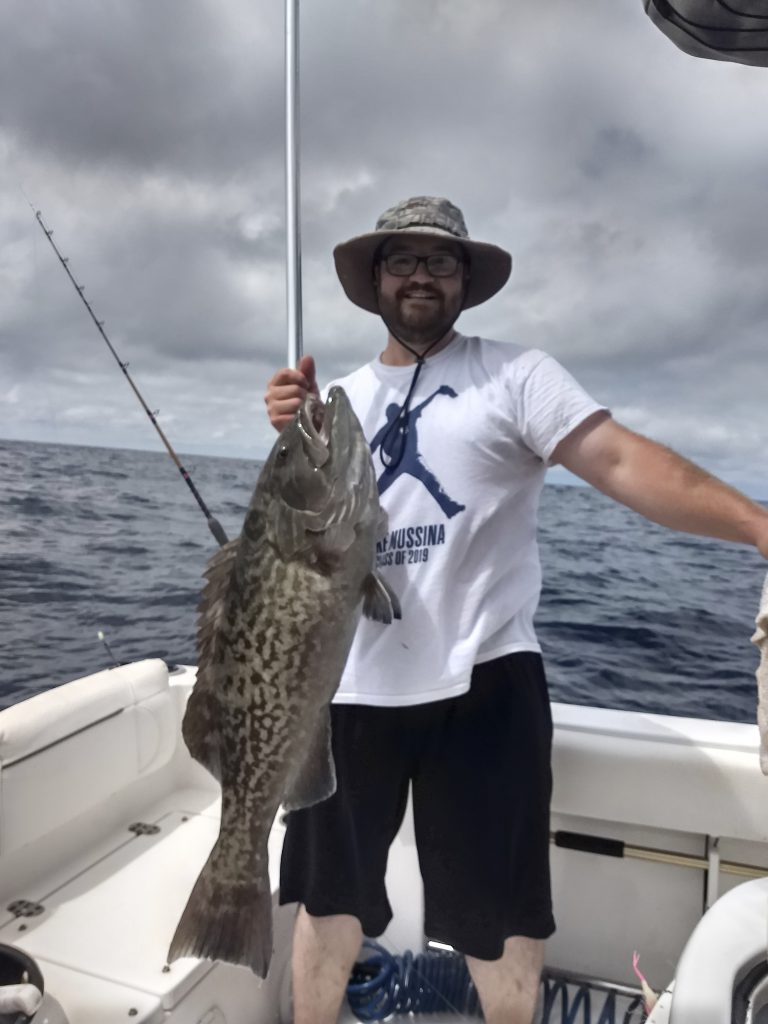 Aaron Wells, from New York, with a gag grouper that fell for a live pinfish in 85′ of water. He was fishing with Capt. Wes Pollard, of Knot Today Charters out of Sneads Ferry.

Robin, of Jolly Roger Pier, reports that large king mackerel (up to 28 lbs.) are tearing up live baits fished off the end.

Spanish mackerel and bluefish action has been great for anglers casting jigs and Gotcha plugs to surface-feeding schools. A few small kings have been mixed in.

Pompano numbers have been good for anglers fishing sand fleas and other small baits closer to the surf zone.

Slot and over-slot red drum are in the area and are feeding on cut baits. Most of the action has been at night. Sea mullet, spot, and croakers are also biting very well in the evening, and they’re hitting bottom rigs tipped with a variety of cut baits.

Vinita, of Surf City Pier, reports that good-sized pompano (up to 2 lbs.) are being caught on bottom rigs.

Fishing bottom rigs at night has been producing spot and sea mullet. Red drum (up to 4.5 lbs.) are feeding on cut mullet fished on Carolina rigs.

Medium to large-sized spanish mackerel and bluefish are plentiful around the bait balls. Both species are striking at Gotcha plugs, Stingsilvers, Sea Striker Jigfish, and similar casting jigs.

Tyler, of Seaview Pier, reports that anglers have seen a nice run of over-slot red drum (up to 45”) while fishing large cut baits, and king mackerel are hitting live baits fished off the end.

Spanish mackerel and bluefish are being caught with Gotcha plugs and jigs. Some large spanish (up to 7 lbs.) are mixed in.

Recent NE winds saw a push of spots being landed, and bottom rigs are also producing sea mullet and pompano. Carolina-rigs with fresh shrimp or cut bait are getting action from black drum and slot-sized reds.

Speckled trout (up to 5.5 lbs.) are beginning to make their way along the beaches.