Matt, of Tex’s Tackle, reports that speckled trout fishing has been outstanding on some days and tough on others. As the water temperatures continue to drop, the fishing should be more consistent. Lightly weighted soft plastics and MirrOlures have been the way to go.

January to March can be great months for trout fishing, though the patterns will depend on whether there is a mild winter or a really cold one.

Red drum fishing has been good around docks in the ICW to the backs of the marshes. Gulp and a variety of other soft plastics are producing strikes in both areas. Cut mullet, menhaden, or live mud minnows are another great option when fishing around structure. This action should remain through the winter months, with some great sight fishing opportunities inshore and in the surf.

Anglers fishing the bridges with live crabs and sand fleas are catching nice-sized sheepshead, black drum, and redfish. Over the next few months, the sheepshead will move out to the nearshore wrecks and black drum will stay around inshore oyster bars and bridges.

The sea mullet fishing should carry over into January, along with some black drum, speckled trout, puffers, and dogfish sharks.

False albacore have been feeding over the nearshore wrecks for anglers rigged with casting jigs.

Most of the king mackerel action has moved into the 10+ mile range. The cooling water will continue to push the kings further offshore over the winter, with the fish usually being located somewhere near the 68 degree temperature mark. The kings are being caught with live bait, dead cigar minnows, ballyhoo, and spoons.

The first few bluefin tuna have already been seen off the beach. They will likely be around throughout the winter.

Nearshore bottom fishing has been good, with gray trout and some over-slot red drum hanging around ledges and ARs. Bucktails tipped with Gulp baits, Stingsilvers, or live baits have been producing most of the action.

Trolling in the Gulf Stream has produced decent wahoo over the last few weeks, including some fish over 70 lbs. A mix of slow-trolling ballyhoo and high-speed lures has been accounting for the bites. There has also been some consistent action with sailfish (and big blackfin tuna mixed in). 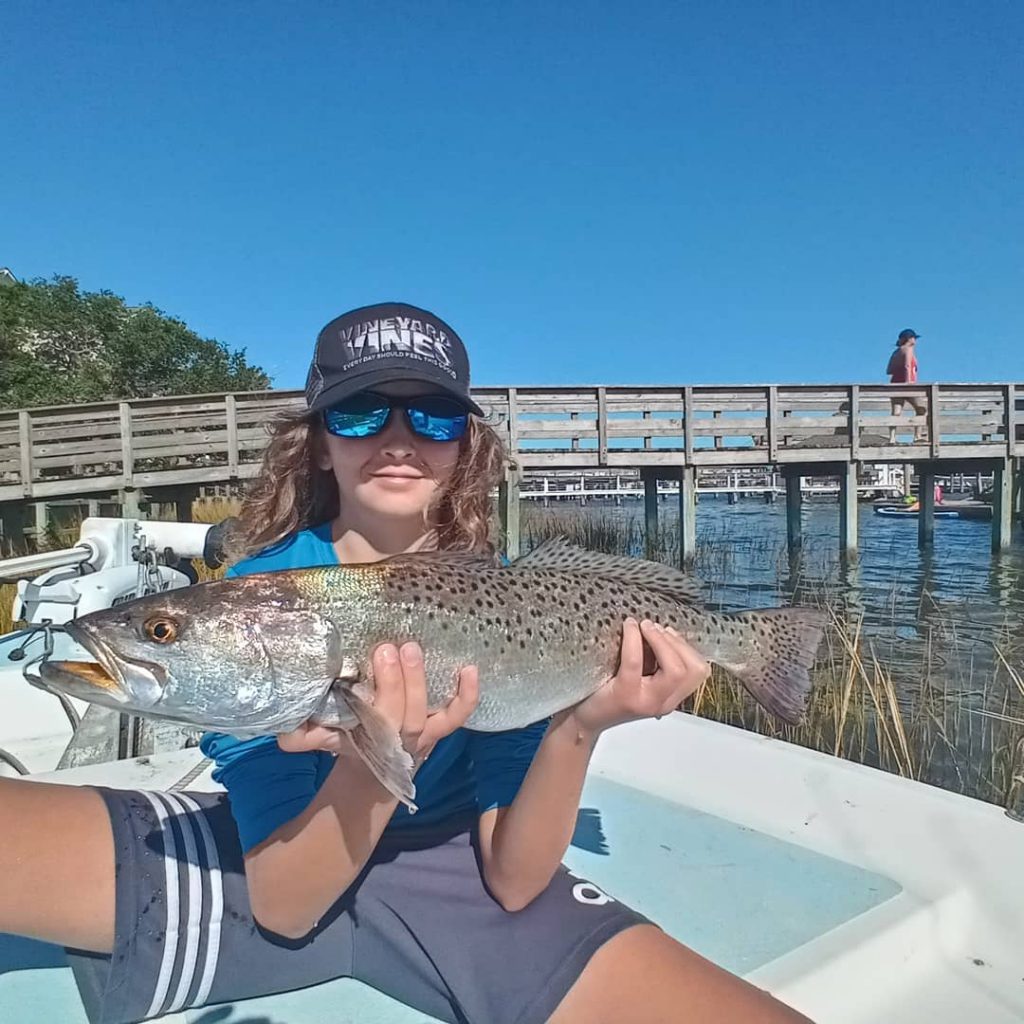 Colin Handlonn, of Raleigh, with a speckled trout caught on a Vudu shrimp while fishing the Wrightsville Beach area with Capt. Jamie Rushing of Seagate Charters.

Ryan, of Intracoastal Angler, reports that inshore anglers have been experiencing a great speckled trout bite while working MirrOlures and soft plastics along the banks.

Red drum are holding more to structure, with soft plastics on lighter jig heads being most productive, and black drum and sheepshead are feeding on shrimp or crabs fished around oyster-covered structure.

King mackerel are still holding from the beaches out to 10+ miles. As long as water temperatures hold, these king mackerel will push and stay in the 15-20 mile range (before it gets too cold).

Grouper fishing has been stellar in the 15-20 mile range.

Offshore trips are picking away at wahoo and blackfin tuna, and large king mackerel are mixed in over these deeper areas of structure.

Into the winter months, offshore anglers can expect the wahoo and tuna bite to really pick up once cooler temperatures help group the fish more around definitive breaks.

Nearshore wrecks in the 30’ range and rock jetties will hold sheepshead, black drum, and tautogs.

Bluefin tuna have made a nearshore run over recent winters, and anglers look for this opportunity over the later parts of January.

Inshore anglers will find action on speckled trout through all the coming months, and red drum can be caught by surf fishing or riding the surf zone from a boat and sight-casting to large schools of fish in search of bait.

Jamie, of Seagate Charters, reports that speckled trout fishing has turned on around Wrightsville Beach now that water temperatures have dipped. Look for these fish to school up along deeper banks and creek mouths as they begin to make their way back into wintering holes. A variety of hard and soft plastics are getting action now that better number of trout are around.

A few flounder are still in the inshore waters, and they’re hitting soft plastics meant for trout.

Black drum are staged up around inshore structure and oyster beds in the creeks.

Luke, of Coastline Fishing Charters, reports that speckled trout are staging up over deeper holes in the ICW and into the shallows of feeder creeks. Live bait is great when you get a hold of some, with soft plastics that can be suspended as another best tactic.

Red drum are starting to school up and head towards the warmer shallows. Docks have been a great starting point for targeting the reds with live bait, Z-Man shrimp, and similar soft plastics.

The black drum will hold tight to oyster beds, docks, and similar structures all winter with live and fresh bait shrimp being best. 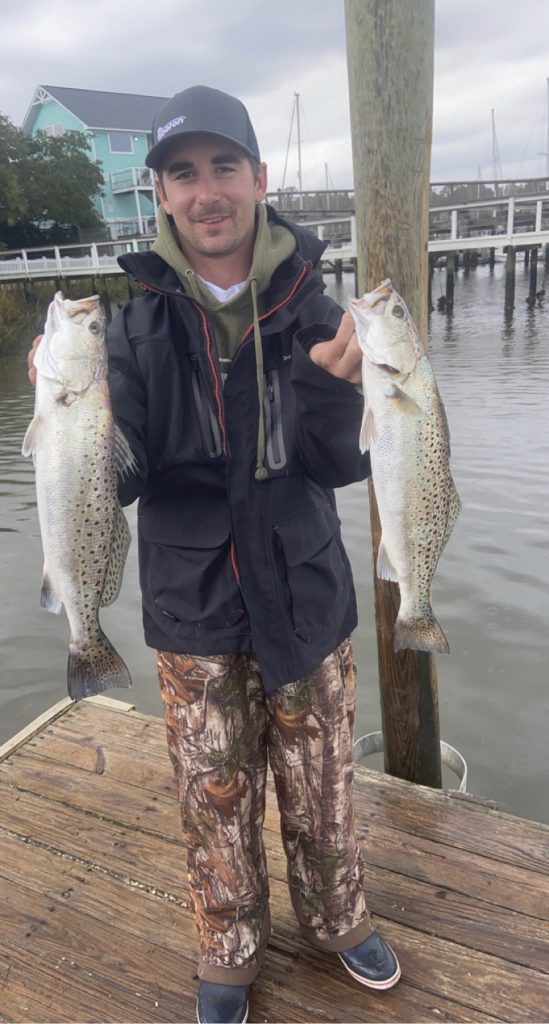 Thomas Mcrae hooked this pair of speckled trout on a Rapala Skitter V. He was fishing the Wrightsville Beach area with Capt. Luke Moser of Coastline Charters.

Bottom fishing for grouper, snappers, and amberjacks has been very good and will last to the end of the year.

Going into winter, anglers look forward to blackfin tuna numbers picking up. These larger groups of tuna make the use of jigs and popper plugs more successful on trips to offshore rocks and ledges.

Wahoo get more active along the break, with trolling being the most productive, and wintertime is great for jigging up huge amberjacks (up to 100 lbs.) and African pompano.

Robert, of Johnnie Mercers Pier, reports that anglers are pleased with the amount of late season spanish mackerel and bluefish. There have been plenty of false albacore hitting small glass minnow jigs cast off the end of the pier at surface-feeding schools, too.

A few king mackerel have been caught, though this bite is coming to an end as the water cools and pushes them off the beach.

Bottom rigs have been producing good numbers of whiting, and pompano are hitting bottom-rigged baits fished near the surf zone.

Some speckled trout are starting to show up. It’s a bit early for the action to peak, but a water temperature drop should see better numbers as the month rolls on. Anglers hope for a mild winter to see some trout and bottom fishing action stick around through December.