Matt, of Tex’s Tackle, reports that schools of smaller reds have been consistently holding in shallow water back in the marshes and creeks, making for some great sight fishing. They can also be found mixed in with black drum, hanging around docks and oyster bars. Fresh shrimp, cut mullet, and live mud minnows will almost always get a bite, although a Z-Man or Gulp fished very slowly can do the job as well.

Speckled trout fishing has still been decent in the local creeks. Although the bite can be a little tougher this time of year, there are some big fish around. Suspending baits like MirrOlure MR17s and MR27s, as well as lighter-weighted swimbaits, are great options.

From the surf, Virginia mullet and pufferfish catches have started to pick back up, along with some black drum, red drum, and the first few bluefish.

The Cape Fear River has had some good-sized Virginia mullet biting down around the mouth of the river, as well as a good striper bite going on a little closer to downtown.

Anglers fishing nearshore structure have been catching black sea bass, sheepshead, and tautog. Most of the sea bass have been undersized, but there are a few keepers to be caught, especially as you head further offshore.

King mackerel are stacked up around Frying Pan Tower and inshore as close as 23 Mile Rock. The bottom fishing will be great out in this range, too, for sea bass, porgies, beeliners, and grunts. Use cut bait, vertical jigs, or Spro bucktails to catch the bottom fish.

Gulf Stream fishing has started to show some signs of improvement. There was a good wahoo bite last week, with a couple of sailfish mixed in. Other boats had decent catches of bigger blackfin tuna, and a report of one yellowfin came in.

Arlen, of Intracoastal Angler, reports that red drum have been biting well, and while most fish are still being caught along deeper waterway docks, a few fish are starting to spread out along the bays and flats off the waterway. While shrimp and cut mullet remain the best offerings around docks, scented Gulp and Z-Man soft plastics are working well on the flats.

Speckled trout have been biting in the boat basins and deeper stretches of creeks, where Vudu shrimp, MirrOdines, and small soft plastics have been the most productive. Fishing a lighter (1/16-1/8 oz.) jig head this time of year will keep your baits out of the green moss and increase your success.

While most fish have been small, striper fishing in the Cape Fear River has been very good. Try chartreuse swimbaits and paddletails fished in the downtown stretches, as well as in the mouth of the Brunswick.

Nearshore anglers are reporting a mixed variety of species, mainly from around the nearshore wrecks and reefs. Fishing the Liberty Ship and 5 Mile Boxcars with crabs and sand fleas on First Flight jigs has been producing sheepshead and tautog. A few small bluefish have been in the same areas.

A bit farther off the beach, several schools of false albacore have been in the 7-10 mile range. As the water continues to warm, look for these schools to come closer to the beach where trolling spoons, deep divers, and casting jigs should produce.

Black sea bass fishing has been good around rocks and ledges in the 12-20 mile range, where fish up to 18” have been reported on cut squid, jigs, and bucktails.

King mackerel fishing has been good in the 40 mile range around Frying Pan Tower, both with Drone spoons and cigar minnows.

Bottom fishing anglers in the 120’ range have seen good catches of beeliners and triggerfish, with Roscoe jigs and squid wings accounting for most of the catch.

Gulf Stream anglers have experienced mixed catches of wahoo, blackfin tuna, and sailfish. While the wahoo fishing has been good one day and poor the next, the best fishing has been from the Nipple and on north, where both high speed offerings as well as ballyhoo/Ilander combos have been productive. Good numbers of blackfin have been biting in the same areas, mainly on Green Machines and smaller trolling lures. 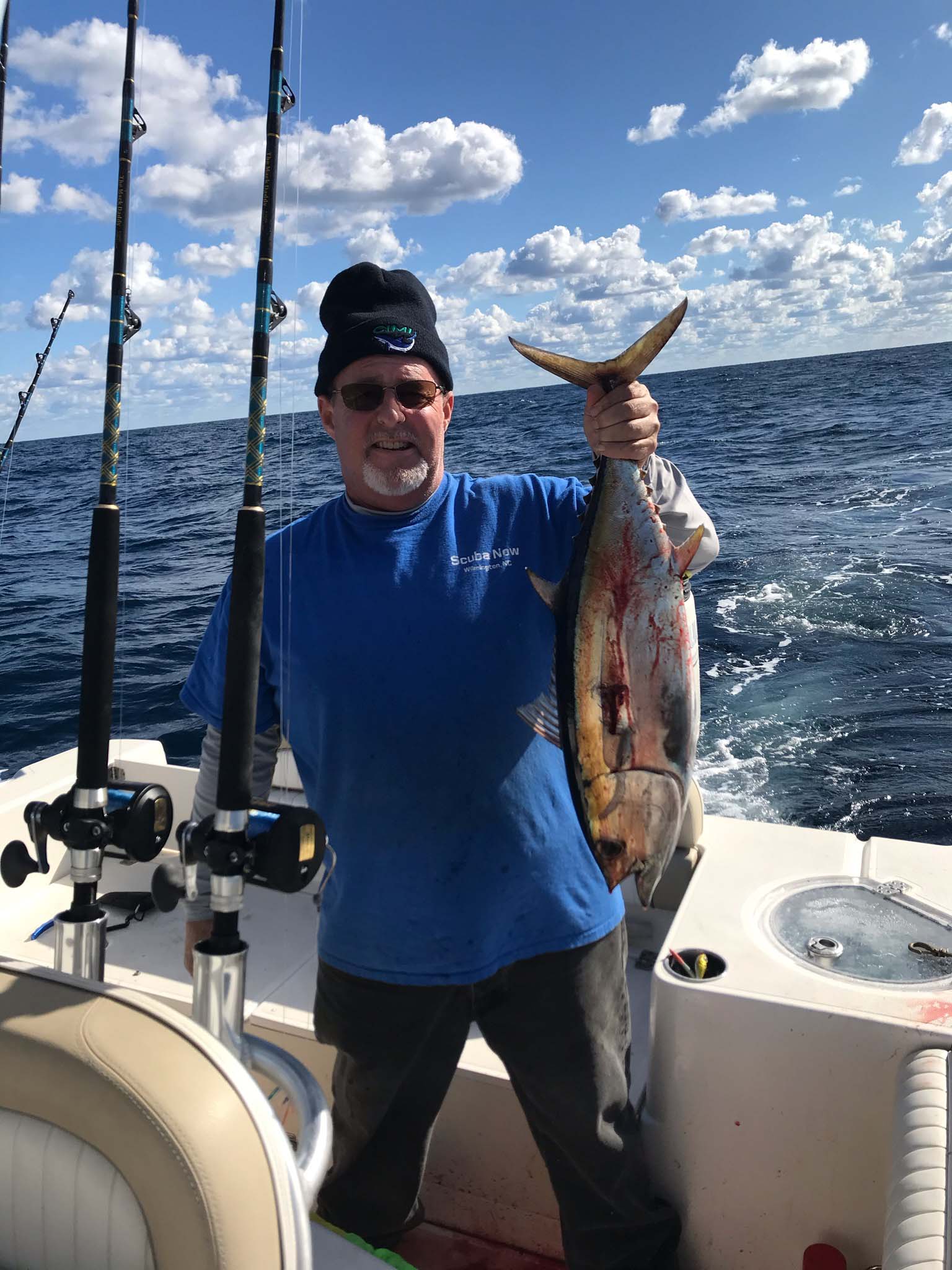 Paul Riccobon with a blackfin tuna that fell for a ballyhoo being trolled behind a bluewater candy mini jag. He was fishing around the Nipple with Capt. Alex Benson of Golden Hour Guide Service.

Jamie, of Seagate Charters, reports that red and black drum are biting around area docks and on nearshore ocean live bottoms and inlets.

Speckled trout have been biting in area creeks and around the inlets. The specks are taking an interest in a variety of soft and hard baits.

The first bluefish and flounder are being caught in the same areas as the trout.

Luke, of Coastline Charters, reports that there has been a strong and predictable bite on the redfish hanging around docks and other structures in the ICW. Fresh shrimp on a Carolina rig has been the way to go for double-digit days. The reds are also taking an interest in soft plastics, such as Z-Man shrimp on a Blue Water Candy jig head in a variety of different colors.

The reds have also been schooled up in the backs of creeks just off the ICW. Covering ground to find the schools of fish is key, and a Z-Man bait on a Blue Water Candy jig head is a great combo to get the fish to bite back in the skinny waters.

Decent numbers of black drum are hanging alongside the reds. The same tactics will work, although fresh shrimp on a Carolina rig seems to be the best for the black drum.

The speckled trout bite has still been strong at times. Vudu shrimp or other shrimp imitations fished slow in deep holes in creeks or near the inlets will land fish.

Sheepshead have been feeding well. They’ve been hanging tight to the Masonboro jetties and structures along the ICW. Live fiddler crabs on a Carolina rig will catch these fish, and the black and red drum will bite the crabs well this time of year, too.

Rick, of Living Waters Guide Service, reports that offshore fishing has seen a steady bite of wahoo and blackfins on the troll in 140-250’ of water. Anglers can expect to find a few sailfish as well.

Jigging has been good for African pompano, amberjacks, and blackfin tuna.

The offshore bottom is holding pinkies, triggerfish, beeliners, and grunts.

Jeff, of Johnnie Mercer’s Pier, reports that puffers, whiting, black drum, and a few small flounder have been caught. The blues will hopefully start showing up in the next three weeks.