Matt, of Tex’s Tackle, reports that speckled trout fishing has just started to shape up for the fall, with some really nice fish pushing into the local inlets. The trout have been hitting topwater plugs early in the morning, with soft plastics and MirrOlures being the better choice for the rest of the day.

The red drum fishing has remained consistent, especially around docks in the ICW. Gulp and a variety of other soft plastics are all getting strikes. Live mullet or menhaden on Carolina rigs are other great options when fishing around structure.

Anglers fishing the bridges with live crabs and sand fleas have been catching sheepshead, redfish, and black drum.

Some big bluefish (up to 6 lbs.) and nice spanish mackerel are schooled up around the inlets.

Sight casting to surface-feeding fish is producing false albacore and spanish mackerel. The usual spread of Clarkspoons has been productive, too, with the fish keying in on larger #1 spoons.

For king mackerel fishing along the beach, live bait is going to be the best option. Further offshore (in the 5+ mile range), the kings are being caught with dead cigar minnows, ballyhoo, and spoons.

Schools of gray trout and some large red drum have been hanging around the nearshore ledges and ARs.

Trolling in the Gulf Stream has shown some signs of improvement, but for the most part it has still been hit or miss. A few wahoo (up to 70 lbs.) have started to show up, as well as sailfish and some decent blackfins. As soon as the water cools off a few degrees, the fishing should turn on.

The bottom fishing and jigging out along the break has been outstanding if the trolling doesn’t work out. 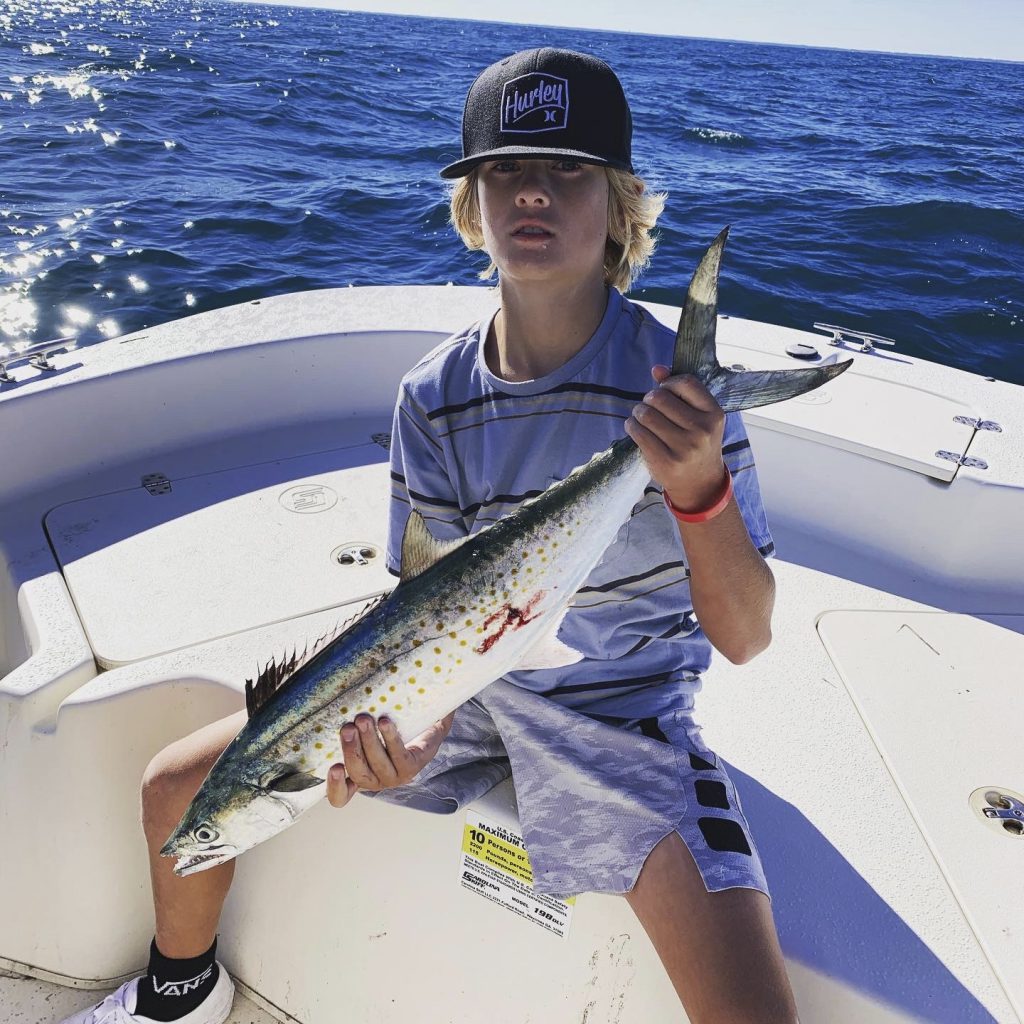 Finn Bell with an 8 lb. spanish mackerel caught while slow trolling a mullet at the Liberty Ship off of Wrightsville Beach.

Arlen, of Intracoastal Angler, reports that inshore anglers are beginning to see speckled trout fishing really pick up. A slight drop of water temperature should put these fish into a frenzy, where a variety of soft plastics, suspending twitch baits, and topwater plugs will all be productive.

Quite a few catch and release flounder are still being caught in the backwaters by those casting soft plastics and live bait. Slot-sized and larger red drum are feeding well from creek mouth areas out to the inlet jetties, and sheepshead are staged up at their regular haunts around docks and bridges.

Some larger bluefish are scattered in both the inshore and inlet areas.

Nearshore action has been focused around spanish mackerel and false albacore feeding on bait balls along the beaches.

King mackerel are in this same area—from the beach out to 8 miles. Most of the beachfront king action is best on live bait.

Offshore bottom fishing is picking up, with grouper pushed into the 15 mile range.

Out around and just inshore of the break, anglers are picking away at wahoo. Over the next few weeks, the cooling water temperatures should fire off this fall wahoo and mixed blackfin tuna action.

Jamie, of Seagate Charters, reports that speckled trout fishing is getting hot in creeks and deep holes off the ICW. These fish have just begun their fall pattern of pushing into larger schools, and when paired with cooling temperatures, it should bring on a great season.

A few nice-sized red drum are in the mix, and they’re hitting cut baits from the creeks out to the inlet.

Off the beaches, schools of spanish mackerel and false albacore are striking casting jigs.

Luke, of Coastline Fishing Charters, reports that bull and slot-sized red drum are feeding well around the inlets and nearshore structure. Live and cut baits on Carolina rigs have been great for getting the reds’ attention. Inshore red drum are hitting topwater plugs and Z-Man soft plastics on Blue Water Candy jig heads around ICW docks.

Speckled trout fishing has been fantastic at times, and like with the reds, it will continue to get even better as water temperatures cool. Topwater plugs have been hot early and late in the day (and they also help anglers in targeting new spots). D.O.A., Vudu, and Z-Man shrimp are all great baits for working grass banks and around oyster bars. As long as live bait stays around, fishing shrimp and finger mullet under corks will be productive.

Sheepshead and black drum are making a great showing. Target these species with fiddler crabs and shrimp around docks, bridges, or oyster beds.

Off the beach, spanish mackerel are crushing bait schools. Trolling Clarkspoons and casting jigs to surface-feeding schools will continue to fill coolers in the coming weeks. 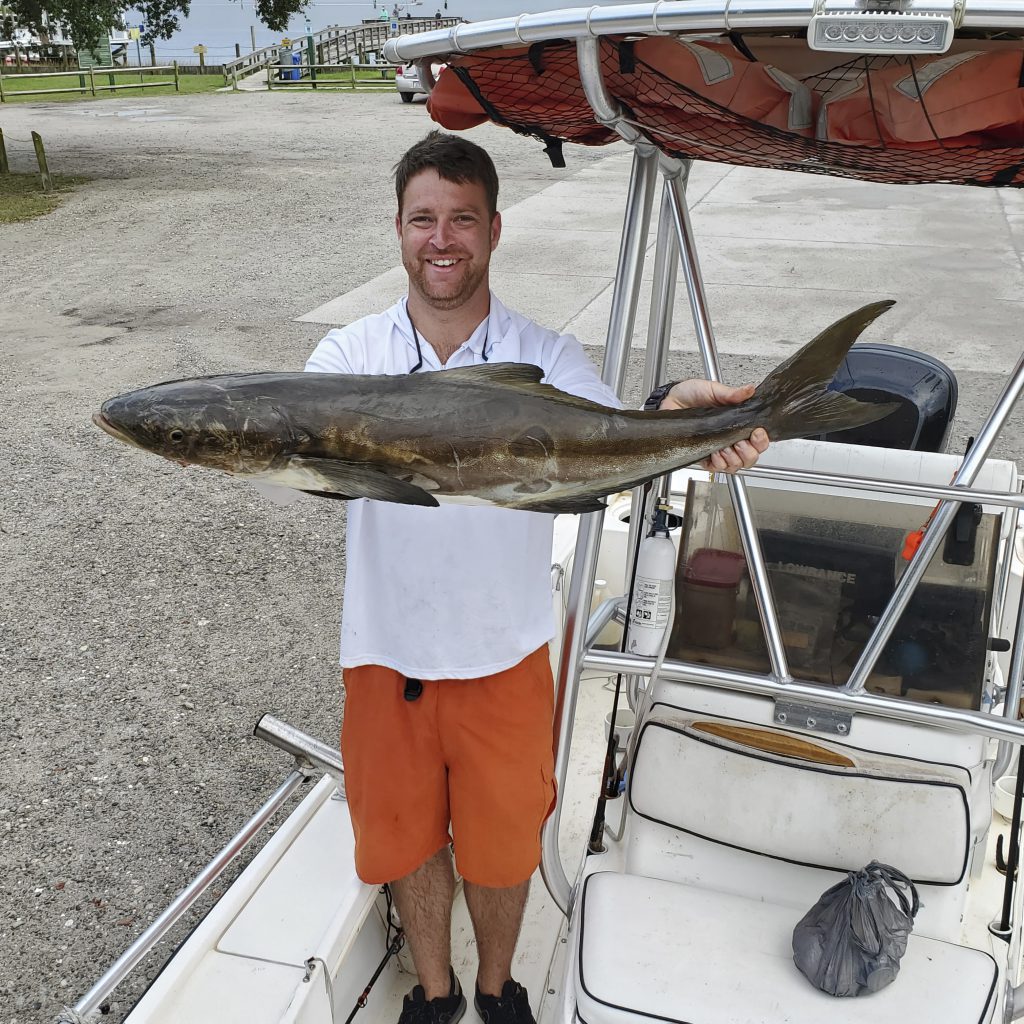 Sami Jaziri with a cobia that hit a live pogie while fishing approximately 10 miles off of Wrightsville Beach.

Rick, of Living Waters Guide Service, reports that offshore anglers have been seeing a great blackfin tuna bite. As the water temperatures cool just a little, anglers look forward to a run of yellowfin tuna to mix in as they stack up.

Wahoo and scattered sailfish will also be mixed in the counts, with action coming for all species while trolling baits, jigging, and throwing large poppers.

Anglers running out for deep dropping trips have been doing well on swordfish, and bottom fishing has been producing great numbers of triggerfish and beeliners.

King mackerel action has been great nearshore, with plenty of larger fish mixed in, and spanish mackerel, false albacore, and citation-class drum are running along the beaches for the days you can’t make the run offshore.

Gabe, of Johnnie Mercers Pier, reports that false albacore action has been good for anglers out in the early mornings.

Plenty of larger spanish mackerel (up to 4 lbs.) are being caught with casting jigs and Gotcha plugs thrown at schooled up bait balls. A good number of bluefish are mixed in alongside the spanish.

Bottom fishing has been producing spadefish, pompano, and sea mullet.

Anglers fishing off the end are reporting king mackerel and the occasional cobia.