Our area has basically been experiencing a very mild fall, and many of the trout anglers have decided that those warmer than usual water temperatures have slowed the arrival of this year’s trout bite. So, it was good fortune for me that the half day I had scheduled a trip with Capt. Tripp Hooks, of Capt’n Hook Outdoors, was the coldest morning to date of the season.

It certainly felt like a trout day as I and friend Dan Duffy made the drive from Wilmington to Ocean Isle, all our winter gear stacked up in the back seat and noting the sight of frost covering several grass patches along the highway. As we climbed aboard Tripp’s boat, docked behind Salt Fever’s headquarters, and felt the cold air and wind that was feeling even colder and windier now that we were on the water, I quickly decided that the extra layer I had packed needed to go on now before we made our relatively short run to our first spot.

The day before had been the coldest day of the season until our day, and Tripp was optimistic for sure that the cold was in our favor. Tripp likes to manage expectations whenever anyone gets on his boat, but still he couldn’t help but wonder out loud that our frigid morning together was shaping up to be a hot, if not very hot, trout bite. 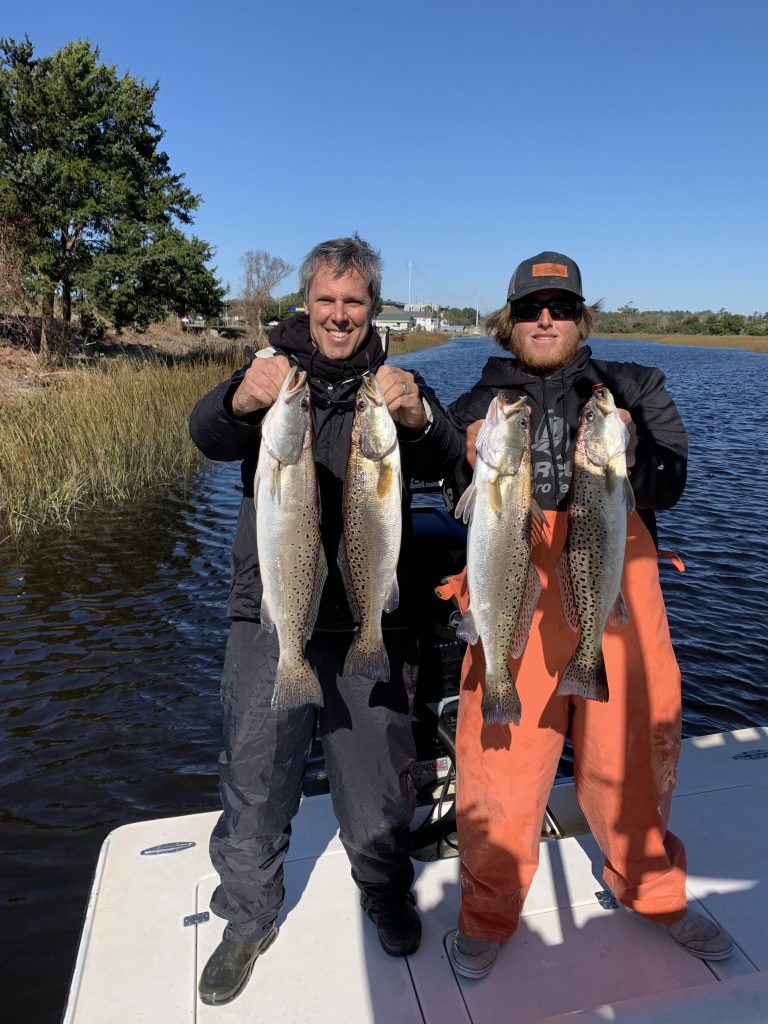 Gary Hurley (left, and not holding his hands correctly like Tripp so that the hands are covered up by the trout) and Capt. Tripp Hooks, of Capt’n Hook Outdoors out of Ocean Isle, with four of the larger trout they caught targeting a shelly bottom area near some oyster rocks.

We pulled up to a winding grass line in a creek off the ICW. Tripp kept the engine running (he’s not worried about an engine in idle spooking trout when we’re sitting in about 12’ of water), put down the trolling motor, and maneuvered us into position a little up current of a smaller creek feeding into ours. Dan and I moved cautiously around the boat, in part because were a little cold from the run and in part because we weren’t yet used to wearing so many layers.

“This grass line has a deep oyster bank. It’s 4-5 feet of water just off the grass, and it drops off to 15 feet deep,” Tripp explained when I asked him what he liked about this spot. “The trout like to sit on that ledge where it drops 10 feet in less than 20 feet from shore.”

Tripp handed Dan a slip-float rig set at about 5’ deep, and he handed me one set at closer to 9’. The idea, Tripp explained, is that we cover different depths and different drift lines until we find the fish, and then when one angler finds the fish, we adjust the other angler to the same depth and drift line.

Dan and I were both drifting live shrimp that Tripp had caught the day before. He catches his own shrimp throughout most of December (and buys them after), holding the shrimp in bait tanks until needed for charters.

Tripp’s depth and drift line logic made sense; however, we never really had to do any adjustments. Right away both Dan and I, at different depths and following different drift lines, had no trouble finding a trout to smoke our live shrimp.

Dan landed the first trout, a healthy 19” fish, and after that first fish, I have no idea how many trout each of us caught. I know most of our fish were 18-19”, and I also know we caught more trout over 20” than trout under 16”, including at least one that easily went over 4 lbs., but all three of us quickly lost count of the total fish catch.

This year has been a challenging year, and I think that the challenges of the year made Dan and I appreciate even more how easy our morning was going.

This first spot was clearly loaded with fish, and we could have stayed there and caught as many trout as we had shrimp, but it’s always fun to see different parts of the geography when fishing waters other than your own, so we decided to see if Tripp’s other trout holes were loaded.

If you’re looking for an easy but productive day on the water, or a fishing trip that is kid-friendly, then I can’t think of a better option than a speckled trout trip with Capt. Tripp Hooks, of Capt’n Hook Outdoors. You never have to make a long cast or an accurate cast. In fact, often you’re just dropping the slip-float rig off of the back of the boat and letting the tide take your bait along its path, while you leave the bail up and help ply out line to keep the bobber upright and the bait drifting naturally. 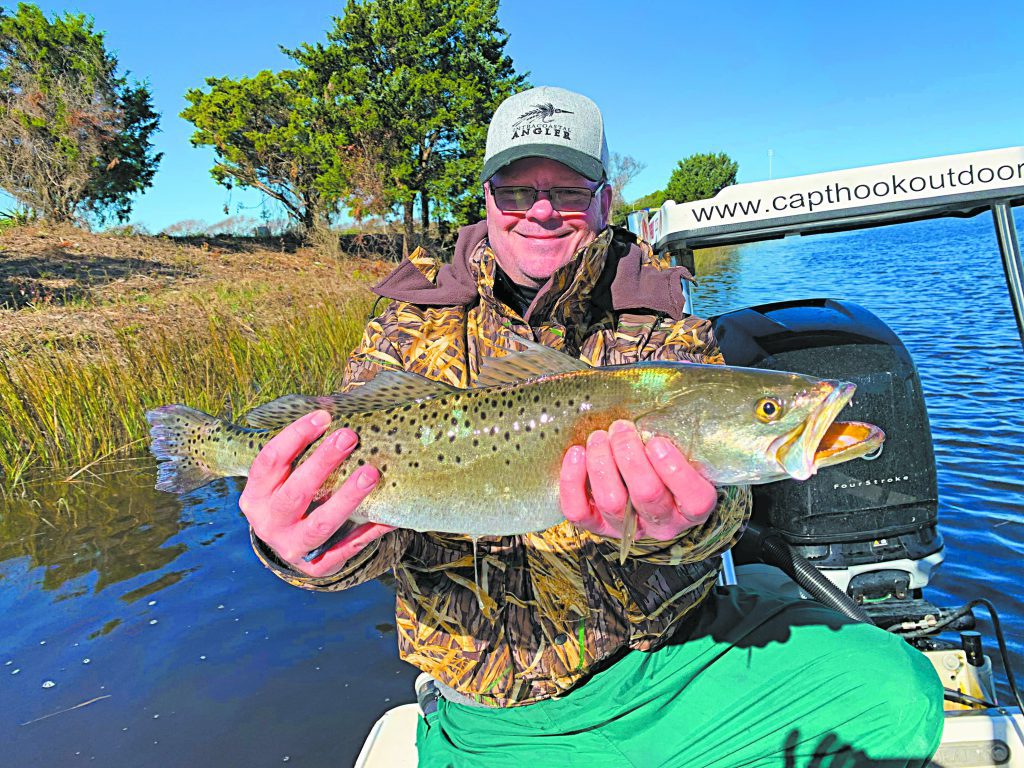 Dan Duffy, from Wilmington, with one of the many trout he caught drifting a live shrimp under a slip-float rig off a grassbank. He was fishing with Capt. Tripp Hooks, of Capt’n Hook Outdoors out of Ocean Isle.

The bobber does down, and then you reel, reel, reel to come tight. Easy.

Tripp will be targeting trout throughout the winter months. He may try on some days sight casting to some winter redfish in shallow water, but his heart in the wintertime rests primarily on trout. You can reach Tripp at (910) 540-7332 or visit him online at www.capthookoutdoors.com to talk about the type of trip you’d like.

I suggest you ask for the Fisherman’s Post trip. That’s when you get to a place and are catching fish after fish, and in the middle of the bite you ask if you can go somewhere else to see if you can catch as many fish in another place.

Yes, that’s the type of request that all guides dream about, and my guess is that afterwards Tripp will call to thank me personally.