False albacore can be caught off Atlantic Beach year-round, Capt. Andy Bates of Captain Bates Inc. told me as we turned the corner out of Beaufort Inlet and headed down the coast looking for activity, but in August they start showing up within 5-10 miles, and then late October is typically the prime time for locating these fish just off the beach, though on certain years it could be as soon as the start of October or as late as November.

Andy’s hope for our morning was to locate fish in the same places where he had found albacore the day before—close to the shoreline and within the vicinity of the pier—and that plan was based on more than just activity there the day before. It was also based on our current wind conditions.

“Whatever direction the wind is blowing, it seems like the fish go into the wind,” Andy described. “So we have a stiff north wind this morning, and that should bring them in pretty tight to this south-facing beach.”

Fish had been caught here the day before, we had the right wind, and quickly into our search we also had bird activity, which Andy especially liked because it wasn’t pelicans but rather the smaller birds.

“Pelicans are often searching for bigger baits than the albies are feeding on,” Andy continued, when I asked why pelicans weren’t good. “The terns may pick up a small live bait, and the gulls are more scavengers, cleaning up the albies’ scraps.” 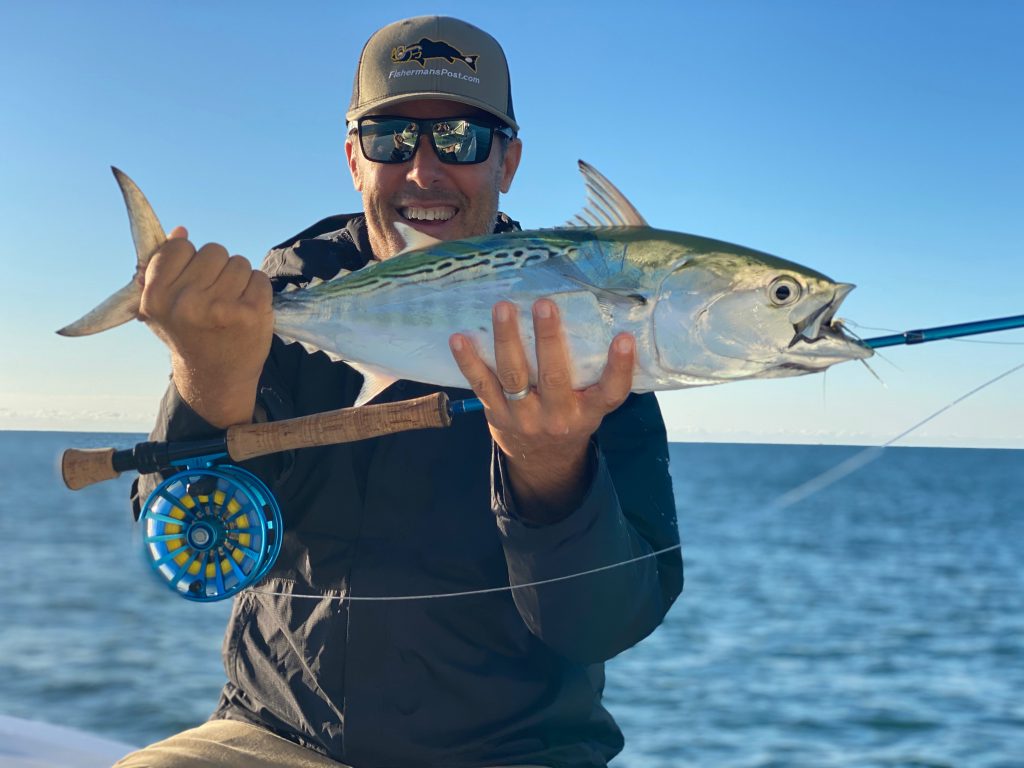 Gary Hurley with a false albacore caught on the fly off of Atlantic Beach. He had a lot of help (including good boat positioning) from Capt. Andy Bates, of Captain Bates Inc.

Soon we both spotted surface-feeding activity under the birds, the bigger splashes of frenzied albacore as opposed to the smaller splashes of bluefish. Andy started to make a big and relatively slow turn with the boat, rather than a “run-and-gun” direct approach.

“I try to read the fish, and if they’re moving, I try to get upwind and cut them off with the boat, drifting to them while they’re working toward us,” he told me as we kept our eyes on the relatively large pod of fish making their way closer and closer. “You’re less likely to spook them and more likely to get a better shot at them.”

Andy handed me a spinning rod with a 3/4 oz. casting metal jig tied on (he makes his own). On cloudy days, he likes the brighter colors such as chartreuse and pink, but more often he finds it better to use color choices to “match the hatch.”

These early morning fish were staying up well, so almost as soon as the jig hit the water and I started burning it back to the boat, my line went tight and I was fast to a healthy albacore. The fish came in the boat, and it wasn’t until Andy was dehooking the fish that I noticed the metal jig had a single hook instead of the standard treble hook.

“Unless we’re trying to catch some to give to someone to use as shark bait or strip bait offshore,” Andy shared while he torpedoed the fish back into the water, “it’s primarily a catch and release fishery. The treble hooks can do a lot more damage, and not to mention, it takes longer to get the hook out with a treble, so if you have fish feeding around you and you’re trying to take the hook out of an albacore’s throat, then you might miss another shot opportunity.”

We did continue to have fish feeding around us, so while I was looking to throw to another pod, Andy was pulling out his 9-weight fly rod setup. As I had told him back at the docks, my fly-fishing skills are “challenged” at best. Andy figured the fish, staying up for long periods, might not be as cooperative as the day goes on, so this would be our best shot at getting a false albacore on the fly.

Andy often caters to fly fishing enthusiasts with this albacore fishery, as he annually has more fly clients than spin clients when it comes to albacore, so he is well versed on getting anglers of all different skill levels at least a shot at one on the fly.

“With a right-handed caster, I’m going to try to put the fish where they’re casting at 11:00, if the bow of the boat is 12:00. I want them casting off their strong side, and I want them to have a little bit of wind coming over their right shoulder helping them shoot the line.”

And then he put me in that exact position: wind coming over my right shoulder with the fish moving roughly from 12:00 to 10:00. I shot out the line a respectful distance, respectful at least by my definition, but the fly came back empty. This happened two more times, with Andy putting the boat in the perfect position and me failing to find a hook set.

Up in the bow, Andy gave me some casting advice, with the hopes that the instructions would help get more distance and subsequently a better shot at hooking up. I was carrying the rod too far back on my back cast, he told me, as well as not bringing my back cast to an abrupt stop, and subsequently I wasn’t getting the load I needed.

Andy decided a couple of practice casts were in order before trying to get back in position, and it was on the retrieve of one of those practice casts that my line went tight and I found myself fighting an albacore that had bit an epoxy head fly with an anchovy pattern. 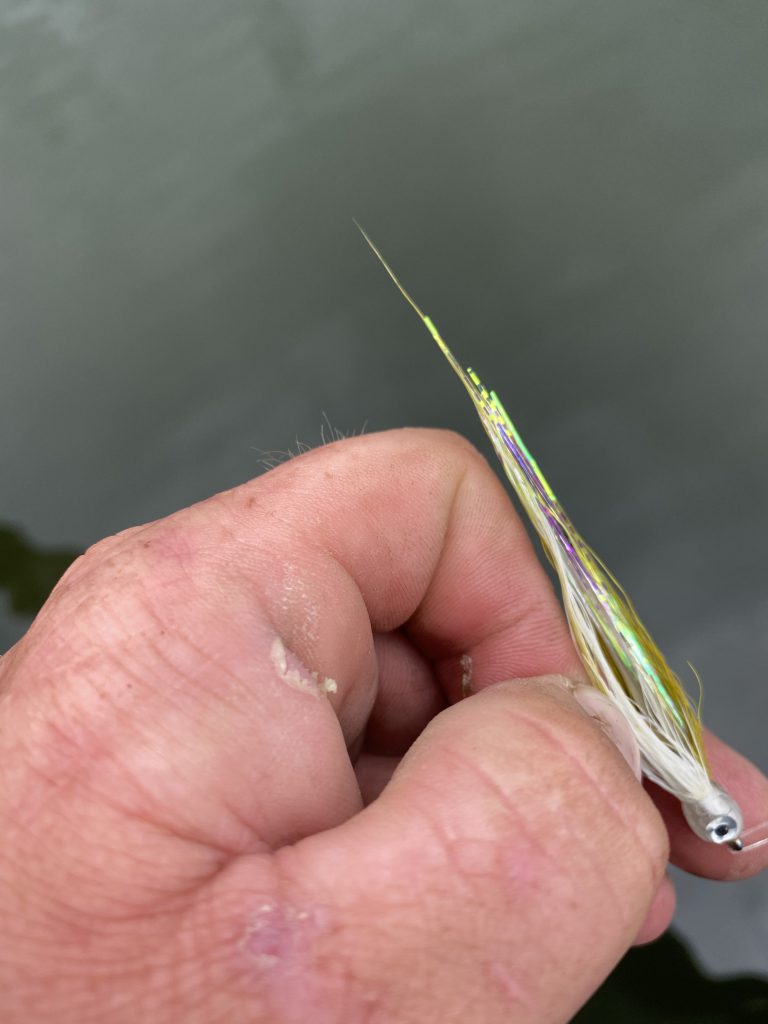 A close-up of one of the flies that Capt. Andy Bates, of Captain Bates Inc., likes to use for targeting false albacore in the fall–an epoxy head fly with an anchovy pattern.

The fly-fishing opportunities quickly abated as the morning continued, the fish now barely staying up on the surface before sounding again. No problem. We had already accomplished a false albacore on the fly, so we spent the rest of the morning throwing metal at fish off the beach, fish around the inlet, fish down towards Barden’s Inlet, and then fish near Shark Island, where we experienced the classic Cape Lookout blitz—a scene of mayhem where big numbers of mixed blues and albacore were in an extended surface frenzy.

This is the place in my article where I try to do a little salesmanship to get you excited to book a trip with the captain, but I like Andy’s pitch, “For people that are looking for a sportfish close to the shore that pulls hard and they’re not worried about keeping a bunch of meat to eat, I don’t know if there’s a better target from September to December than the false albacore at Cape Lookout.”

You’d be enjoying a fishery that past presidents have traveled to Cape Lookout to experience, and a fishery that Andy has spent the last 15 years fine-tuning his process of giving any angler of any ability, spin or fly, the best chances of success.