Team “Brew Crew,” from Wilmington, NC, took home the first-place victory with two kings totaling 51.94 lbs. Capt. Robert Malkmus, with his brother-in-law Devin Severt and friend Willie Robison, made the trek to Ocean Isle on Thursday to spend a day collecting menhaden for bait and scouting out good fishing grounds.

Unfortunately, the weather had turned by the time Friday came around, and their plan to run to the Horseshoe was abandoned as they battled 5-7’ swells and a strong northern wind. Instead, they tried their luck out at the Jungle. All morning they pulled in 8-10 pounders, always thinking the king on the line would be bigger than what it turned out to be. 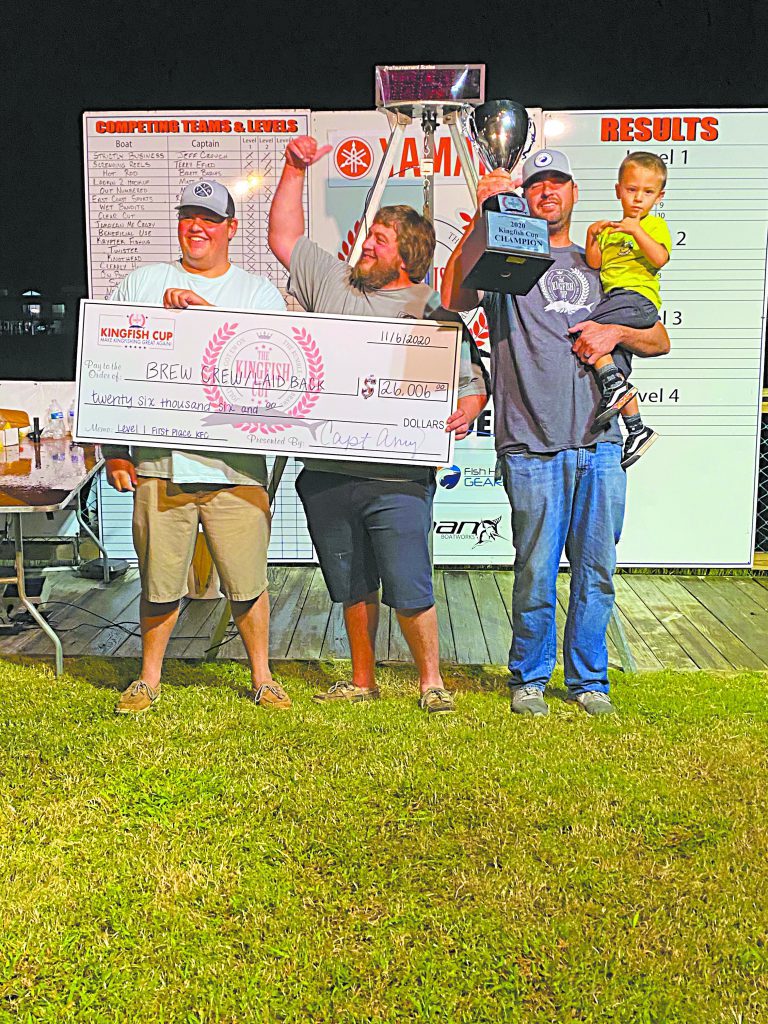 Team Brew Crew, from Wilmington and consisting of Capt. Robert Malkmus, Devin Severt, and Willie Robinson, won the 2020 Kingfish Cup Championship event with a two-king aggregate of 51.94 lbs. They caught their winning kings at the Jungle.

“It didn’t put up a real big fight. Just navigating the boat was the hard part. The wind was against us, and all our lines got tangled as I was trying to reel it in,” said Malkmus. After the other lines were organized and twenty more minutes of fight passed, the 28.05-pounder was in the boat.

Their second largest winning fish was caught later in the day around 1:30 p.m.

“We watched two fish sky themselves on the topwater baits at the exact same time, but neither hit,” Malkmus recounted. Not thirty seconds later, their downrigger line started screaming. “The downrigger got smoked,” added Malkmus. Severt took the reel, and Malkmus gaffed the 23.9-pounder.

The trio took home a $26,006 check for their first-place finish.

Malkmus said, “It’s such a good feeling for all of us, being able to be a young team competing with all the veterans and to score the win.”

Second place went to long-time tournament anglers Team East Coast Sports, from Hampstead, NC. Capt. Randall Eden fished with his son Riggs Eden, his father George Eden, and boatmates Mark Freeman, Bill Cunningham, Jeremy Newton, and Chris Gaddy. The team left out of Little River Inlet and went straight to the Jungle, following rumors that the bite was good. Contrary to the gossip, they found it to be completely dead, pulling in nothing but little spanish-sized kings.

After leaving the disparity that was the Jungle, they ran offshore about five miles to more promising waters.

“We immediately started catching teenagers. There were lots of fish coming out of the water there,” reported R. Eden, “but no winners, and more boats were starting to show up.” So again, they moved on to another location.

Fishing now around the 22 Mile Rock, they pulled in a 15-pounder right away that bit a menhaden on a top line. Not long after, they had the two kings in the boat that would earn them second place—one weighing 29.8 lbs. and the other at 17.25 lbs., giving them a total fish weight of 47.05 lbs.

“We felt pretty good about it based on the radio chatter,” said R. Eden. “It was obvious that no monsters were being reeled in by anybody.”

After weighing in, the team was ecstatic to find out that they were at least temporarily in first place.

“We sat on the hot seat for a few more boats to weigh in until the ‘Brew Crew’ got there,” said R. Eden. He added, “There’s always a car faster than yours, a boat bigger than yours, and a fish better than yours. We were hoping to at least hang on to second, and we did. We’ve been fishing the tournament since the late 90s, and it’s always a great time, thanks to Brant and Amy at OIFC who put in all the behind-the-scenes work.”

Young Riggs Eden added, “It’s really exciting to pull the big fish on the boat, to hear the line screaming out, and to see the colors flash when you gaff it.”

A total of 20 out of the 29 participating teams weighed in fish, and $215,248 was paid out to eight different teams during this final, year-end event.

For more information on this event, or to see a complete leaderboard, visit the Kingfish Cup website at www.kingfishcup.com.