The 10th annual Cy’s World Rodeo once again took place on the Saturday following Thanksgiving (November 28 this year). The tournament was first initiated in 2010 in honor of Edgar “Cy” Garber, IV, who passed away at age 17 and was an avid outdoorsman. Cy’s World is a nonprofit organization created to enable underprivileged youth in southeastern North Carolina to experience the great outdoors that Cy loved so much.

The top spot is awarded to the boat that weighs in the heaviest two-fish aggregate: two trout, two red drum, or one of each.

First place this year went to Brandon Sauls and Clay Morphis, of Team “Back to Back,” a duo that has fished the tournament since the first year. The two fish that put them in first place were both hooked near the Little River jetties.

Using 7” pencil corks and live shrimp caught off Sauls’ dock the night before, they fished the early morning hours, but everything they managed to pull up was less than 3 lbs. So they shifted around the jetties with the tides, looking for a hot spot.

On his first cast that drifted over a deeper hole, Sauls’ bait was taken by the first of their two big fish, a gator 8.95 lb. trout.

“I’ve caught a 9.2 pounder before, so I know what the big boys feel like. I saw that green tail flash and knew it was going to be a winner,” Sauls reminisced. For the next hour they continued to pull in several 4.5-5 lb. trout, but they were looking for an upper-slot red drum to secure a victory.

While jigging over a hole where the tide wasn’t set quite right, a 6.2 lb. red drum miraculously ate the live shrimp, putting them in the lead. 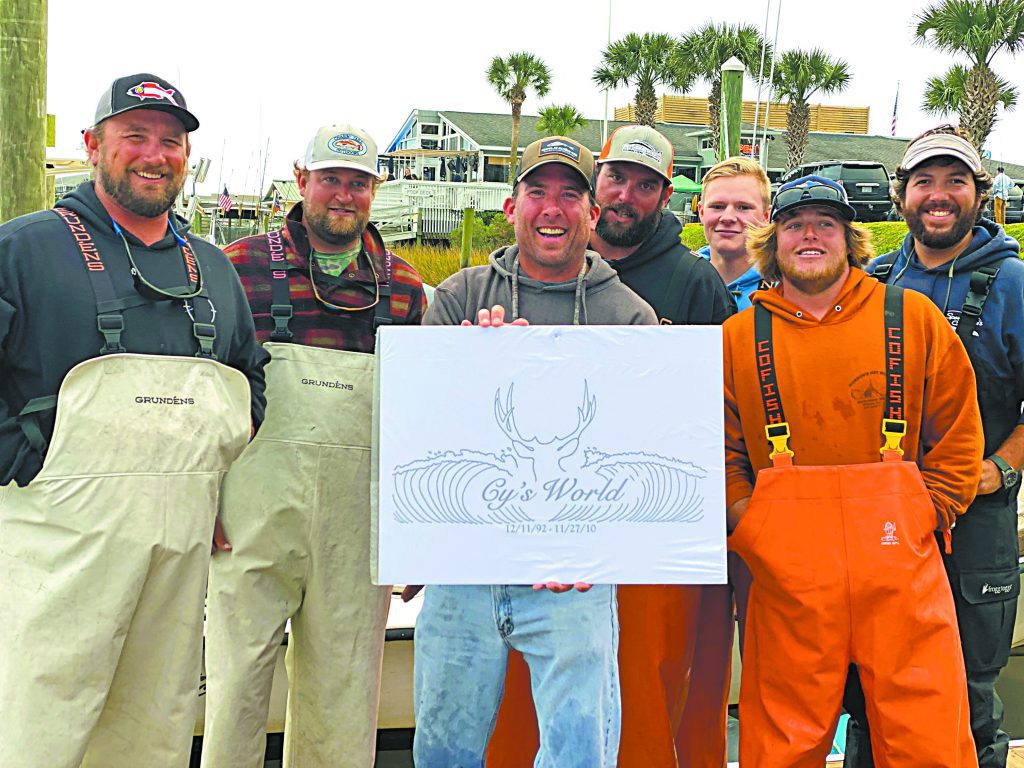 “We’ve fished the tournament since its inception and have won every year except last, when we lost to the young bucks. They’re four charter captains and we’re just the weekend warriors, but we came back and reclaimed the title this year,” said Sauls.

The “young bucks” placing second were Tim Disano, Tripp Hooks, Shane Britt, and John Cooke.  They’ve been fishing the tournament together for the last four years.

At the start of the morning, they watched their rivals, first place team “Back to Back,” reel in the top placing trout down the jetty from where they sat.

“That’s a once in a lifetime fish, but they seem to do it every year,” said Disano. After catching nothing noteworthy at the jetties, they decided to switch locations.

Disano said, “This time of year we know about what to expect, so we relied on spots we’ve fished before and knew were good. We went up in a real, real shallow creek working with the tide to get in, but we never did get all the way up where we wanted to go.”

Their first 5.8 lb. prizewinner red drum bit a shrimp under a float in very shallow water. The second, weighing 5.6 lbs., hit over a deeper hole and ate a mullet on a jig head.

Satisfied with their catches, they raced back to the weigh-in where they found themselves in second place. Disano added, “We usually just donate the prize money right back. It’s for a good cause, and we’re really just after the bragging rights anyway. There’s only so many spots and so many tactics to use. It’s just whoever happens to get on them, and it’s just about the fun of it at the end of the day.”

For more information on the Cy’s World Foundation, visit www.cysworld.org.