Every year on the second Saturday in November, the Swansboro Century Club Trout Tournament takes place. This year it fell on November 14 and was held out of Casper’s Marina in downtown Swansboro.

The Century Club is a non-profit organization that raises funds for Swansboro Middle and High School athletic programs through capital improvement projects, similar to a booster club.

This year’s first-place victory was won by Tom Shiver, Lindy Sutherland, Sr., and Lindy Sutherland, Jr., all from Jacksonville, NC. The team took home a $1,782 check for a three-fish aggregate weight of 14.94 lbs.

As it was their first time fishing the tournament, they pre-fished the area around Swansboro to find spots with a decent bite and to figure out which baits to use.

“The conditions were pristine,” said Shiver. “The water was calm and clear, and the air temperature was in the upper fifties.” 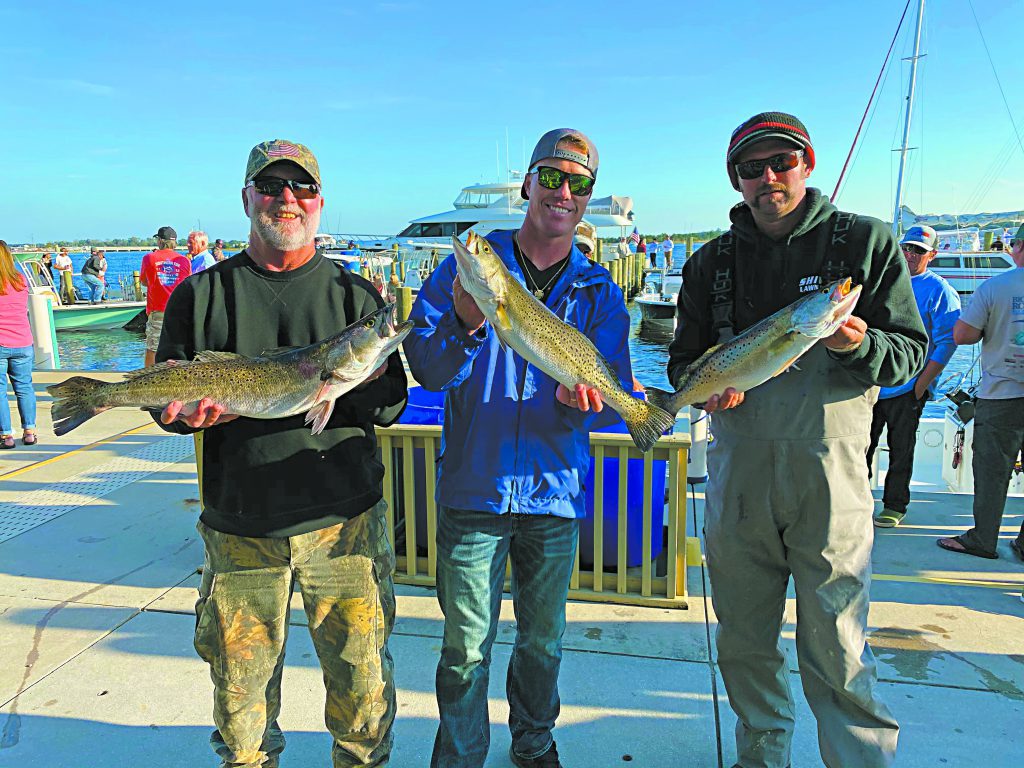 Lindy Sutherland, Sr., Lindy Sutherland, Jr., and Tom Shiver won the 2020 Swansboro Century Club Trout Tournament with a three-trout aggregate of 14.49 lbs. Most of their fish came from the Sneads Ferry area.

After the shotgun start at the marina, the trio hopped around from the Neuse River to Sneads Ferry and everywhere in between. While putting around the Sneads Ferry area, the largest of their three fish, a 7.30 lb., 28.5” trout that also won them the TWT, bit a custom-made rigged bait from Neuse Bait & Tackle.

“We had smaller fish earlier in the day that put up a better fight than that one,” said Shiver. Sutherland, Sr. easily reeled the trout in, while Shiver manned the net.

Throughout the rest of the day, the team caught an abundance of trout which were mostly 18” or less. They used an assortment of baits, including MR-17s, Vudu shrimp, a variety of twitch lures, and MR-27s for the big guys.

Second place went to David Moore, Mike Phillips, and Dylan Phillips, from Swansboro, NC, for their three-fish aggregate of 10.54 lbs. Moore and M. Phillips have fished together for over 20 years and have won this tournament four times in the past. This year they brought D. Phillips along, who took home this year’s Junior Angler title.

“The tide was just right to get up into Core Creek and Adams Creek,” said Moore. The bite was very favorable there, he explained, and not only did they hook into an abundance of trout, many that were large enough to be potential winning fish, but they also caught their 4.08 lb. big fish that cemented the second place finish.

“We caught almost the same amount of drum there that we did trout. The bite just kept coming,” added Moore. A classic slip cork and live shrimp was their rig and bait of choice, which proved profitable.

For more information about this tournament or to view a more complete leaderboard, visit the Swansboro Century Club Facebook page.