There was $371,000 available in cash awards, including $16,320 added by the tournament Board, inspired by the huge number of participants. The Southport Marina has hosted this tournament for more than 40 years, but due to the extensive damage from Hurricane Isaias earlier this season, the event was moved to the nearby park.

Capt. Adam Broadwell, who has fished the tournament since 1981, said, “It was great to have all the kids out there with us, fishing with the team.”

They reeled in their winning catch on Sunday, the second of two fishing days. Saturday, the first day of fishing, had already proved prosperous for the team, as they were ranked second on the Day 1 results. A 37.2 lb. king that they had caught in the Cape Fear River channel late in the day on freshly netted live pogies held them a high spot on the Saturday leaderboard as they prepared to upgrade on Sunday.

The early morning hours of the second day were spent fishing near the river channel again, but soon other tournament anglers began to show up in the same area. “I guess the word got out. It became way too busy. People were getting closer and closer to us, and I was getting frustrated,” voiced Adam Broadwell.

Deciding to try their luck elsewhere, they ran ten miles up the beach to an old favorite spot of A. Broadwell’s known as the “Big Hill.” It was there, at 3:00 p.m., that the winning king bit on a live menhaden. Back at the dock they discovered the catch had bumped them up to first place, and the team ecstatically accepted their first place trophy and $80,506 check. 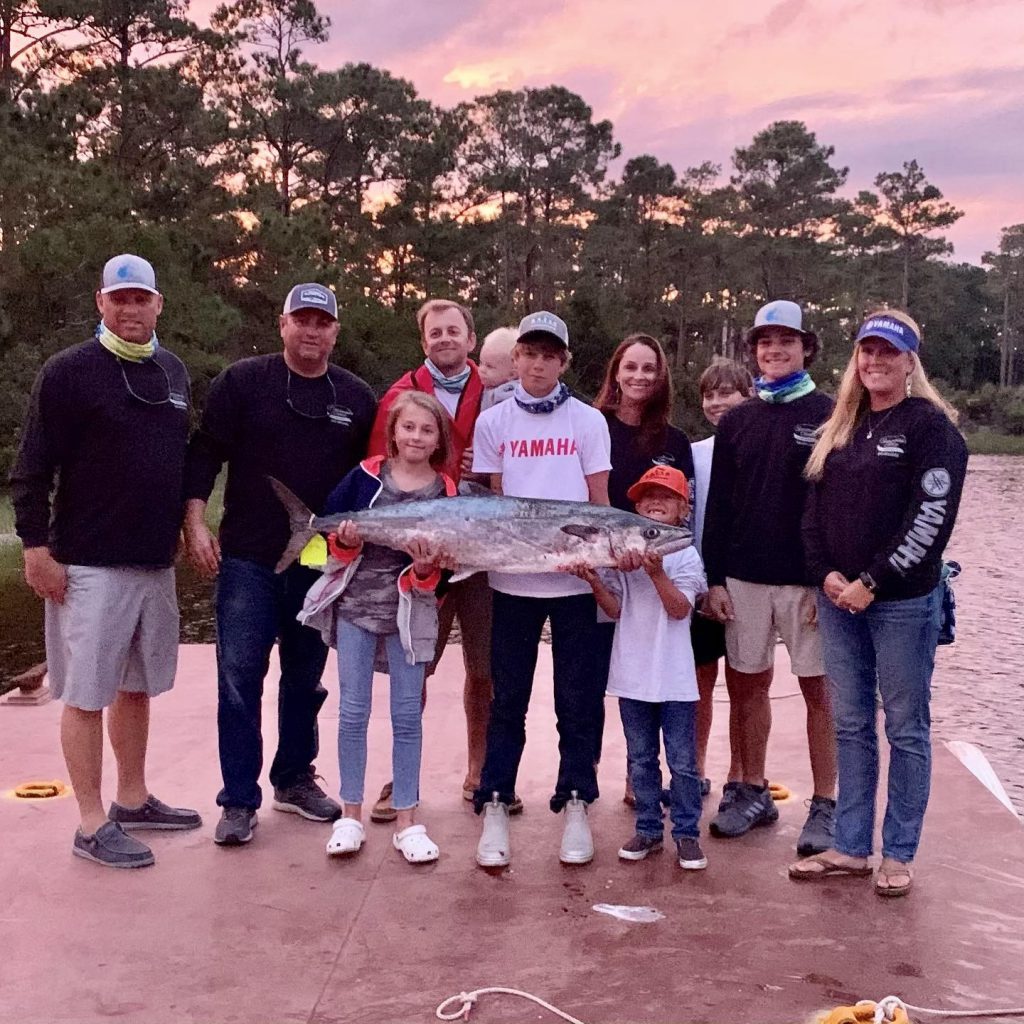 The second place team was “Sling N Bait,” from Southport, NC, who weighed in a 37.75 lb. king mackerel on Saturday. Team members Tracy Aman, Austin Aman, and Teri Bruner ended Saturday by finishing just a little ahead of their lifelong friends on the “Nauti Lady.”

Captain T. Aman said, “We had the lead that first day, but of course they swooped in the next day and bumped us into second.”

The second place king mackerel that won them $53,557 was hooked by A. Aman while the team was fishing just west of the river channel, about a mile off the beach. The king put up a challenging fight, immediately spooling out lots of line. “It almost spooked us, it hit so quick. We scrambled to turn around and chase it down,” recalled T. Aman.

After a good twenty minutes of reeling the fish in, T. Aman tried to gaff it but couldn’t quite reach, and it again sped off. A. Aman endured twenty more minutes of fighting the king until it was close enough for his father to reach over and gaff it, all while Bruner drove the boat.

“We were using pogies, of course. That’s what the big fish hit. Then we had green Blue Water Candy skirts around them,” said T. Aman.

The team also pulled two other kings in the boat earlier in the day, caught in the same area. The first was barely over 19 lbs. and the second weighed 24 lbs. They fished again on Sunday but went home with the second place trophy.

“It was not our usual tournament but, in many aspects, it was the same quality event that organizers had hoped for 42 years ago,” said Karen Sphar, Executive Vice President of the Southport-Oak Island Area Chamber of Commerce. She continued, “There were challenges caused by Hurricane Isaias and COVID-19, but the community came together to make sure the tournament could go on safely and, in the end, the 2020 U.S. Open King Mackerel Tournament will go down in the record books.”

For more information on the U.S. Open King Mackerel Tournament and to see a complete leaderboard list, visit their website at www.usopenkmt.com.