On Saturday, February 8, the second event in this year’s Eastern Carolina Winter Trout Series, sponsored by Holloman HTG and AC, took place. With three locations to launch from (Jacksonville, Sneads Ferry, or Swansboro), anglers spent the day fishing with artificials only.

Landing in first place with four fish weighing a total of 11.48 lbs. and bringing home a $600 check was Jeffrey Thigpen of Thig’s Fishing Charters in Chinquapin, NC. Thigpen dodged debris and unsuitable river conditions that were present due to warm weather and muddy waters to find only three fishable areas over the course of the day. 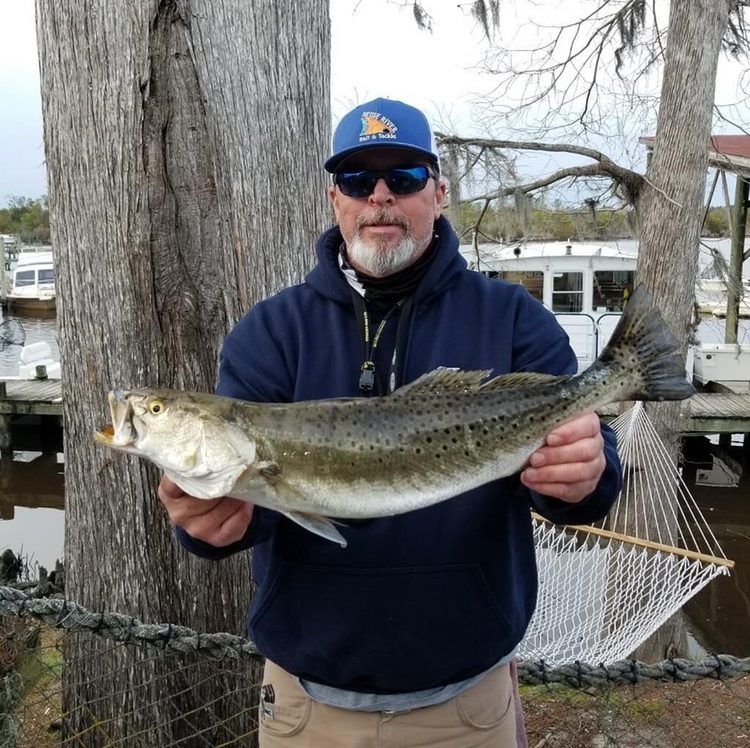 First place winner Jeffrey (JT) Thigpen, of Thig’s Fishing Charters, holding up the 5 lb. speck that was part of his winning aggregate, and also earned him the Big Fish Pot in the second event of the Eastern Carolina Winter Trout Series.

He had no trouble reeling in fish after fish and upgrading his catch, though, once he found the right spots. The only lures he fished were custom MR-17s and MR-27s.

Thigpen also weighed in a 5.00 lb. speckled trout, winning the Big Fish Pot and the $1000 payout along with it. His trophy catch came up to the top of the water easily. The fish shook its head while Thigpen reeled it halfway to the boat, and then it found its energy, took off, and ran around for another five minutes.

Taking home the second place title and a $400 check were Corey Durako, Richard Gilligan, and Barron Glenn, of Chasin’ Gingers from Wilmington, NC, with their four fish weighing in at 11.26 lbs. They also found it tough to find any decent fishing conditions with such dirty river water.

“It was a tough day. Slick as glass and high pressure rolling on in made for a tough bite,” said Durako. The team spent their time running up creeks, using mainly MR-17s. They caught 15 fish, mostly in shallow water from 3-6’ deep. Their biggest catch was 3.5 lbs. and 22.5” long, caught by Durako.

“It was a fun fight. I hooked him deep in the throat. It wasn’t bad to get him in the boat,” he recounted. The team earned 49 points for their second place finish, and they send their thanks to George at Tideline Marine for his help.

Third place and its payout of $300 was claimed by Jake Haynes and his buddy Ryan Taylor from Swansboro, NC, for their four fish weighing in at 8.40 lbs. The duo also landed a 4.20 lb. red drum earning the Big Drum Pot and an additional $250. The team earned 48 points for their finish.

Of the 16 registered boats that launched, ten weighed in fish. The 32 fish that were weighed in totaled 69.51 lbs.