With freezing air temps and cold inshore waters, 12 boats joined the quest on February 22 to fish for trophy trout in the third event of the Eastern Carolina Winter Trout Series. This was the third of five events. Series participants earn points for their placement in each individual tournament event that accumulate over the duration of the series. At the final event, series champions will be determined based on that overall point value and awarded prizes.

First place was secured by Corey Durako, Richard Gilligan, and Barron Glenn, of Chasin’ Gingers from Wilmington, NC, with their four-fish total weight of 14.42 lbs. Using small soft plastics, they caught most of their fish early in the morning while dodging icy patches on the water. They caught about 15 fish total on the day, with their big fish caught at 1:30 p.m.

“It was so cold it felt like the fish were in survival mode,” recounts Durako. The team won $500 and 50 points for their win, plus an extra point and an additional $250 for the Big Fish pot with their 4.41 pounder caught by Giligan and netted by Glenn. 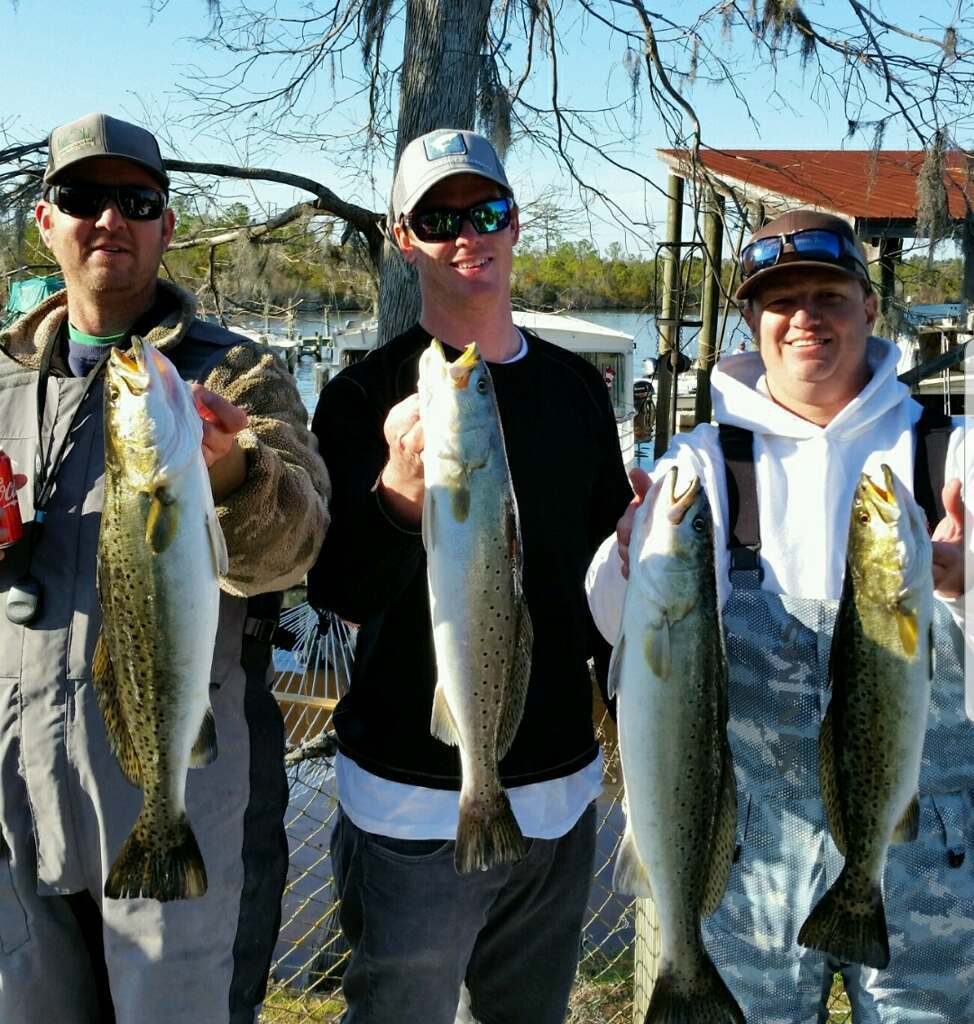 Corey Durako, Barron Glenn, and Richard Giligan, of “Chasin’ Gingers” from Wilmington, NC, with the four fish that won them first place in the third event of the Eastern Carolina Winter Trout Series.

Second place was seized by Brent Banks of Specktacular Inshore Charters for his 11.01 lb. four-fish total, earning him $300 and 49 points.

Grabbing third place for this event with a total fish weight of 10.02 lbs. was Nick Holloman and his partner Baker from Clinton, NC. The duo usually launches their 20’ Blue Wave boat (dubbed “Shake ‘n Bake”) from Sneads Ferry, but they started this event from the Jacksonville Yacht Club location. A smart choice, as they ended up catching 40-50 fish throughout the day, although they were all on the smaller side.

They were not used to the freezing weather. “It was brutally cold. The ice on the deck was like a skating rink,” says Holloman. Their successful fishing tactic was to play it low and slow, dragging Zoom soft plastics lethargically over the bottom. For their third place win, they earned $200 and 48 points.

The Big Drum Pot’s $125 payout and single point was awarded to the Taylor/Haynes duo for their 4.63 lb. red drum.