Red, of Island Tackle and Hardware, reports that the offshore action has been located way off the beach, with most anglers running 50-60 miles. Wahoo and a few blackfin tuna are striking ballyhoo on skirts and behind jet feathers.

Inshore anglers are finding good action on black drum and redfish around oyster beds while fishing sand fleas or shrimp.

In the next few weeks, nearshore anglers should be seeing schools of bonito in the 5-mile range.

King mackerel begin to push into the 40-mile range with warmer water temperatures, and trolling Drone spoons behind planers and strip baits are productive for the early season kings. 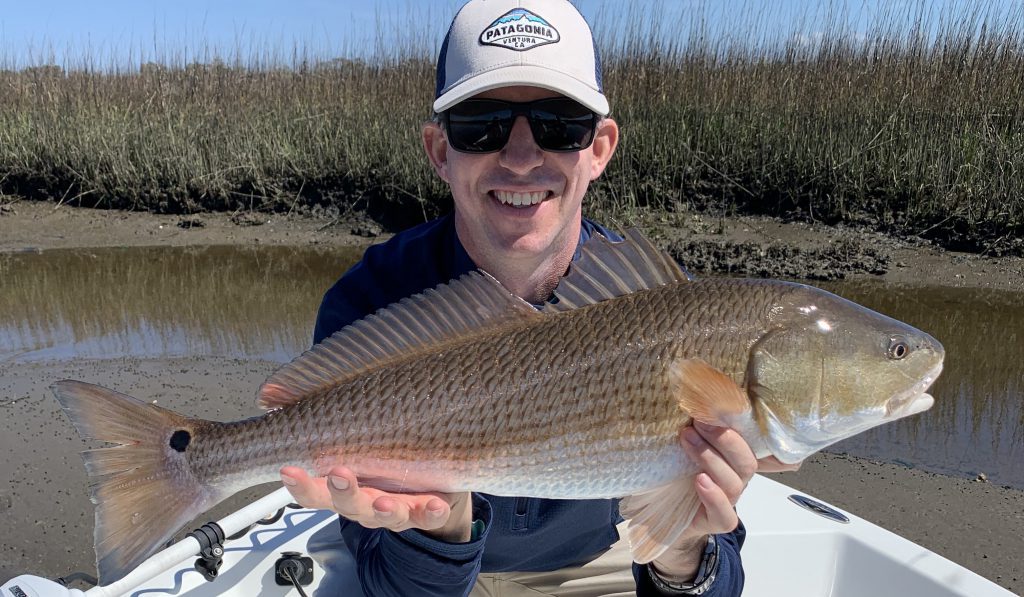 Stuart Wilson, from Charlotte, with a red drum caught on a live finger mullet in the lower Cape Fear River. He was fishing with Capt. Christian Wolfe of Seahawk Inshore Fishing Charters.

Christian, of Seahawk Inshore Fishing Charters, reports that black drum numbers have been particularly good over the past few weeks. Finding the larger, keeper fish, on the other hand, hasn’t been as easy. Fishing shrimp on jig heads or lightweight Carolina rigs is producing good numbers of these 13-15” black drum. Anglers are having success targeting inshore oyster shell bed (especially the points) during lower water cycles.

Red drum (up to 25”) are holding in similar shelled areas, and they’re hitting both dead shrimp and live mud minnows on jig heads.

There are some anglers catching whiting as they push into the Cape Fear River. These are all signs that spring fishing is just starting up. Rising water temperatures and dry weather will be important in the bite firing off.

Luke, of Spot On Charters, reports that speckled trout action is heating up along with local water temperatures. Recent trips have found that smaller baits have been key to getting strikes, as these fish are just beginning to warm up. MirrOlure MR-17s and smaller white or flashy-colored soft plastics have worked great.

Redfish action has been good, but finding the schools hasn’t always been as easy. A bit of recent clarity to the water has been helpful in locating schools.

With more bait becoming available over the next few weeks, it will be smart for anglers to target redfish more often.

Speckled trout will soon be in a full spring bite. There won’t be as many fish as in the fall, but these pre-spawn trout tend to be larger specimens.

Trips off the beach will be targeting surface-feeding bonito with Stingsilver casting jigs.

Tommy, of Mungo Fishing Charters, reports that moving into April has anglers looking forward to hard fighting false albacore to show up in the area. Sight-casting 1-2 oz. Big Nic metal jigs at these surface-feeding schools with lightweight tackle setups is the favorite method.

Inshore anglers targeting red drum will want to be rigged up with topwater plugs, as these schools are hungry and aggressively feeding after the long, cold winter. These groups of reds are being found up on the flats and in creek channels chasing bait.

Black drum are starting to show in better numbers with water temperatures rising. Fresh, dead shrimp fished on a Carolina rig in creek bends and deeper holes is the most successful tactic for strikes.

Speckled trout action is starting to become more consistent. The bait of choice has been 4” new penny colored split-tail jerk shad soft plastics on 1/4 oz. jig heads. The MirrOlure Heavy Dine sinking twitch-bait has also been getting some good strikes. 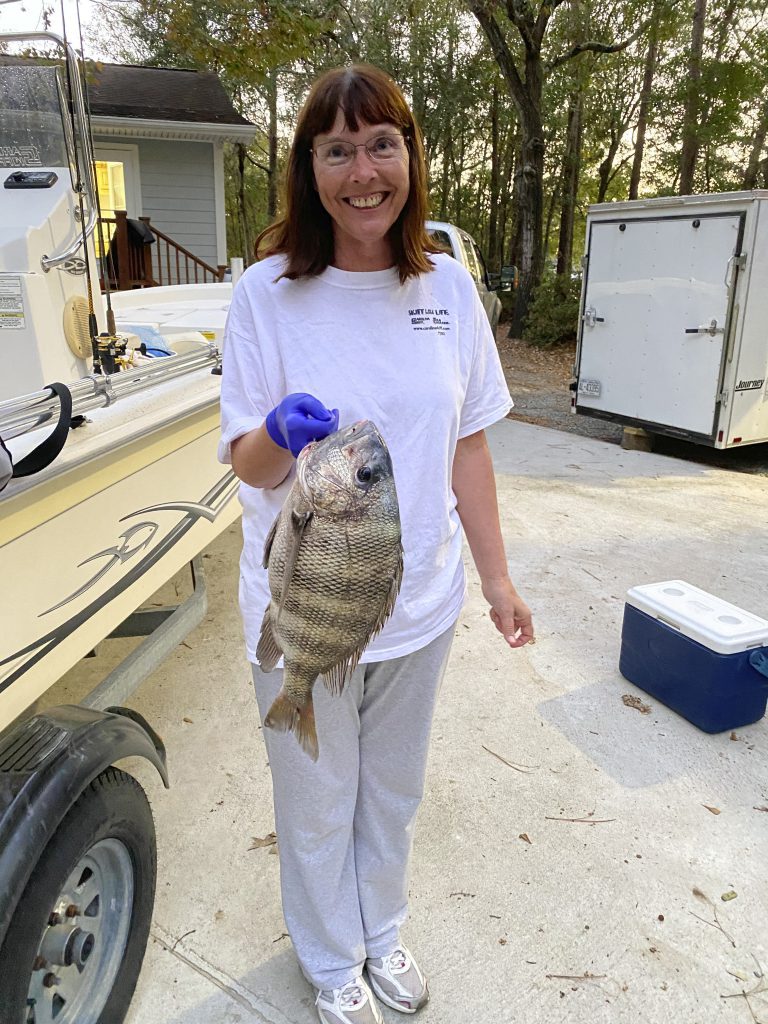 Lindy Broach with a 5.5 lb. sheepshead that fell for live shrimp while fishing the Cape Fear River.

Rod, of OnMyWay Fishing Charters, reports that the large black sea bass and grunt action has been excellent in the 18-24 mile range. These fish are schooled up on just about any ledge or live bottom in the area.

King mackerel are holding outside the tower. Offshore water temperatures are on the rise, but it just needs a little longer for the magic 64-degree number to hit and see these schools push near shore.

The Gulf Stream action has been focused from north of the Nipple to the Swansboro Hole in 145-160’ of water. Wahoo and blackfin tuna are both holding over rocks for anglers looking to troll baits. Some blackfin tuna are holding around the Steeples as well. With these early season trips, getting an updated water temperature shot is everything. The current makes large movements this time of year that can sometimes shift by miles very quickly.

Paul, of Kure Beach Pier, reports that whiting and puffers have begun to show up in better numbers because of stable weather sticking around the area.

Over the next few weeks, there will still be cooler waters around, so anglers bottom fishing with fresh bait will be the most successful. A mix of large whiting, black drum, puppy drum, and small flounder should all be mixed in the counts for the bait anglers.