Lewis, of Island Tackle and Hardware, reports that surf anglers have been doing well despite the up and down conditions from passing cold fronts. A mixed bag of whiting, pufferfish, black drum, speckled trout, and scattered red drum are all moving into holes between the breakers.

Fishing from the ICW down into the river has been producing red drum and speckled trout, as anglers target these fish moving into creeks for the winter. The river anglers have found the dry fall conditions to allow for high salinity in the waterway, and this is seeing action and bait pushed further upriver than in seasons past.

Anglers running offshore have been predominantly bottom fishing, with good catches of snappers, porgies, and black sea bass, and offshore trolling has been producing wahoo and blackfin tuna.

Moving further into winter will have anglers targeting speckled trout in the deeper holes in the creeks and throughout the CB yacht basin.

Red and black drum will be scattered throughout the area, with most of these fish holding up close to structure such as docks and oysters. Redfish will also be schooled up back on the flats around Buzzards Bay. 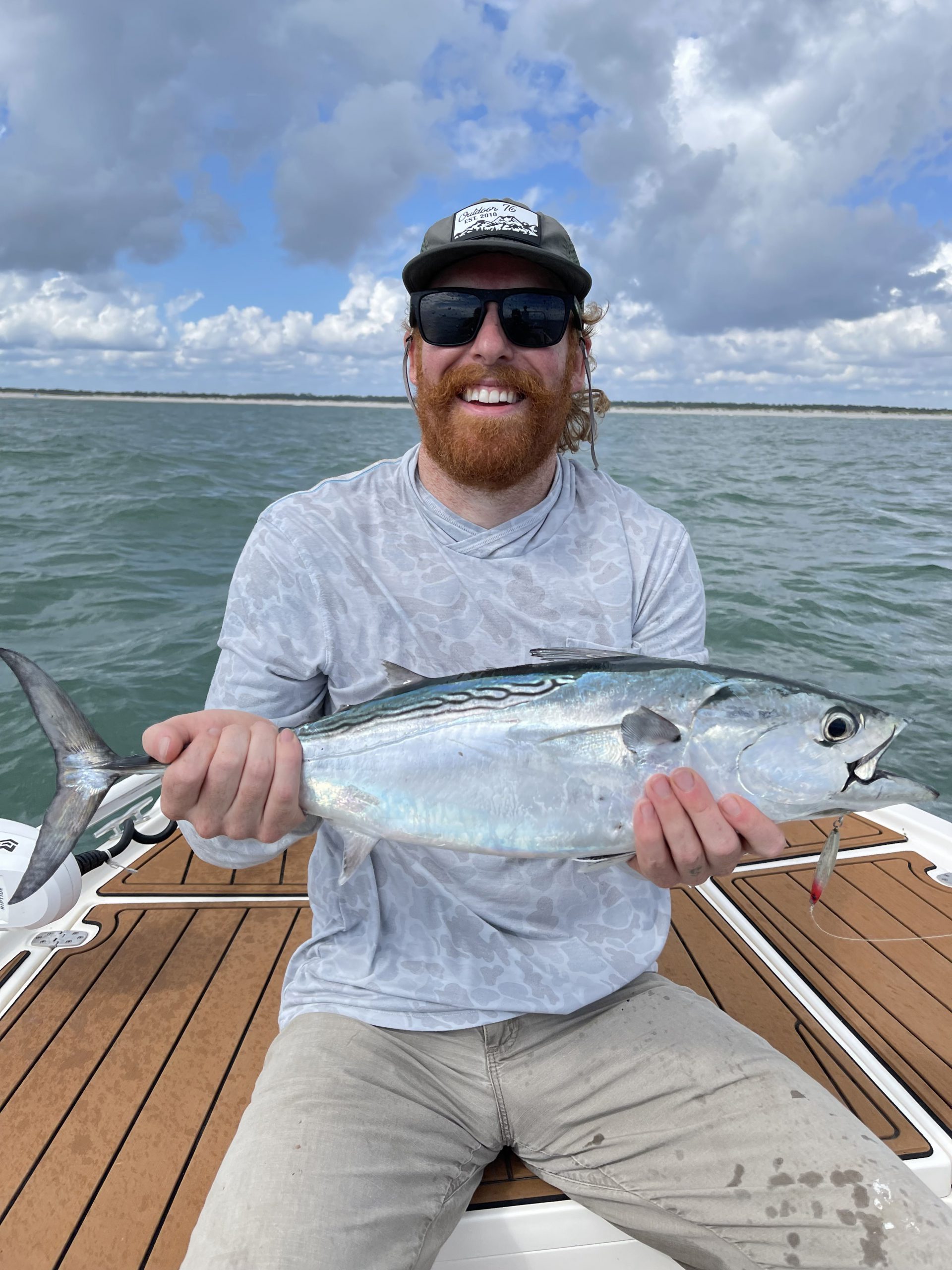 Palmer Grigsby, from Wilmington, with a false albacore that hit a casting lure just outside of Carolina Beach Inlet. He was fishing with Capt. Zane Long of Falling Tide Fishing Adventures.

The red drum have been a smaller class of fish, but there are slots mixed in. Dead bait shrimp, scented soft plastics, and live minnows have been getting most of the red drum action.

Fishing bait shrimp on the bottom has been producing decent numbers of black drum. Most are a 15-17” class, with 20+” fish mixed in. Target areas with shelly bottoms to locate these schools.

Speckled trout are biting well for anglers rigged with MirrOlures, D.O.A. shrimp soft plastics, and live shrimp. Expect to see the majority of the trout in these schools in the 14-20” range.

Both black drum and speckled trout will also go for shrimp placed in these same areas.

Tommy, of Mungo Fishing Charters, reports that going into the winter, anglers fishing on the lower Cape Fear River will find that red drum will be caught by anglers casting artificial baits, live mud minnows, and fresh bait shrimp. A favorite way to target these redfish is sight casting these baits to schools pushed up on sandy and muddy flats. Days with calm, clear weather will be best, as the sun will warm the shallow waters and get the fish more actively feeding.

Black drum are best targeted with the freshest bait shrimp you can find, and then fished on Carolina rigs around muddied-bottom oyster bars and dock structures.

Speckled trout fishing should have some good days as well during these colder months. Targeting a period after a stretch of 2-3 warmer days will see the action more productive than usual. Focus on the backs of creeks where the waters warm up quicker. It is helpful to have a little current or rip line present to cast artificial Z-Man soft plastics, D.O.A. shrimp, and MirrOlures at, and work slowly to entice a bite from any group of sluggish fish. 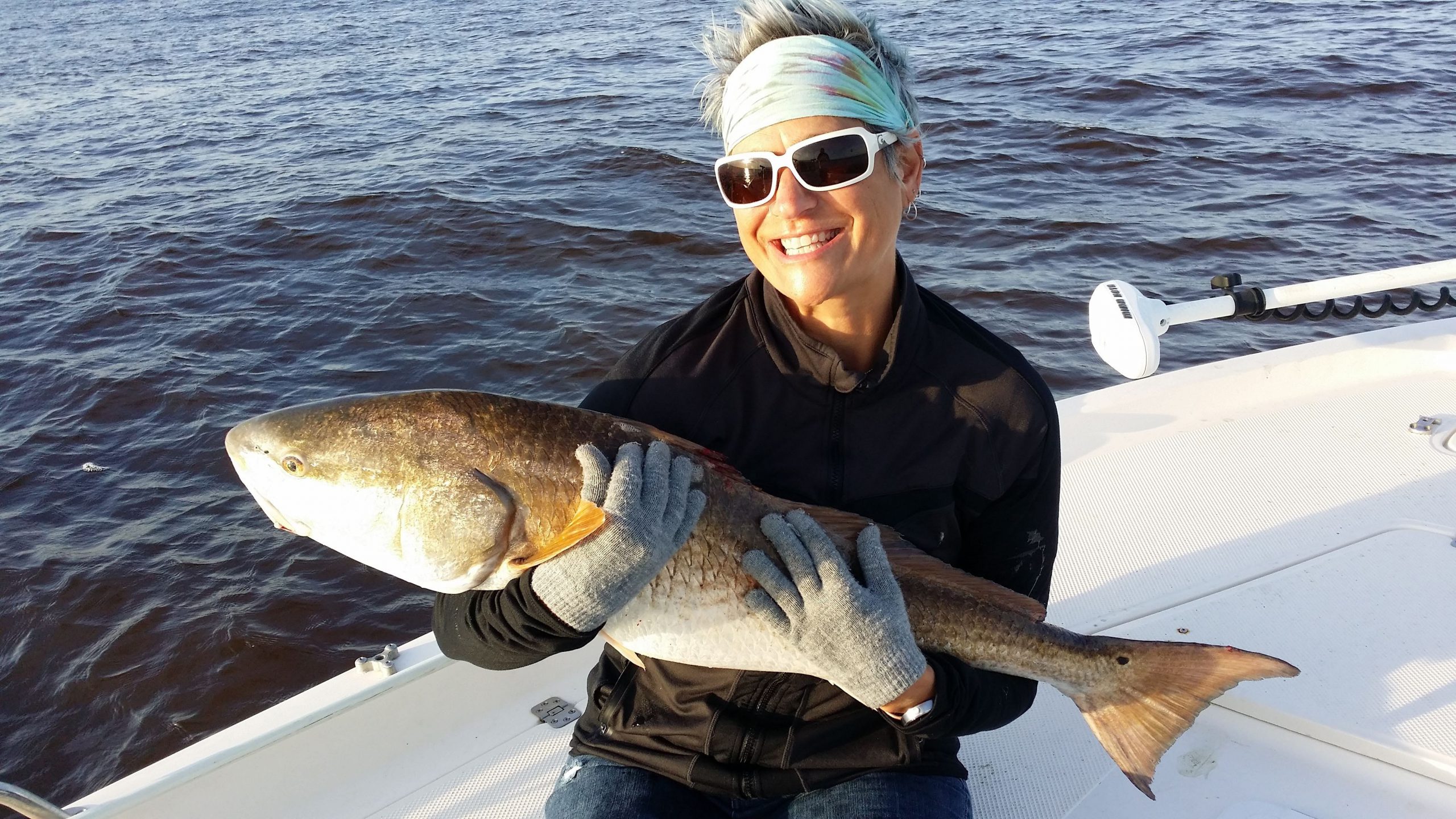 Karen Hawkins, of Carolina Beach, caught (and released) this bull red on a live menhaden in the Cape Fear River. Karen was fishing with her husband, Capt. Jim Hawkins of Keep the Sea Inshore Charters.

Rod, of OnMyWay Fishing Charters, reports that the bigger black sea bass are starting to aggressively feed over live bottoms and ledges in the 12+ mile range.

Grouper have been pushed into the 12-22 mile range with the cooler water temperatures.

Overall, the bottom fishing has been good anywhere from the 12-30+ mile range.

King mackerel are moving around to try and hold in the 68-70 degree water temperatures. Currently, those temps have been hovering in the 25-30 mile range. Areas of structure around 23 Mile Rock and down to structure off the Frying Pan Tower are great areas to find some of this action.

Offshore trips are targeting wahoo that have been moving into the area. In this late fall time period, it is important not to overrun the fish, as they congregate around structures from anywhere in 130-240’+ of water. Structure is so important for wahoo, so be sure to get trolling baits down deep to where these fish are.

Mixed in the offshore counts are blackfin tuna, sailfish, and even late season mahi, so there hasn’t been a need to run wire throughout the spread in order to raise the strike chances from these species.

As we get deeper into winter, expect to see black sea bass action remaining red hot.

When looking to find trolling action, be sure to get an accurate water temperature shot before making the run. Anglers in the winter have to be keyed in on the warmer water currents pushing around and target structure in those particular areas.

Always remember with these winter trips to be conscious of the generally smaller weather windows to make offshore runs. The low water temperatures and lack of boating traffic around makes it critical that anglers carry proper safety equipment and not try to push their boundaries.

Anglers coming down to surf fish over the winter should look to bottom fish, as that represents (by far) the best chances of success with water temperatures being very low.