Lewis, of Island Tackle and Hardware, reports that anglers fishing inshore both along the ICW and into the Cape Fear River system are landing red drum, speckled trout, and black drum. With the amount of baitfish schools cruising around, live bait has been best for all three species.

Surf fishing has been hit or miss, depending on clean water versus wind-stirred water. When conditions are good, croakers, smaller flounder, and whiting are hitting fresh shrimp or artificial bait strips, and smaller sharks are being hooked by anglers fishing cut baits.

Those heading off the beach are finding spanish mackerel and kings at nearshore wrecks.

Christian, of Seahawk Inshore Fishing Charters, reports that red drum fishing has been very good and is easily the primary inshore target species. Live baits, such as menhaden and mud minnows, have been best while fished either on jig heads or Carolina rigs (if the winds are high). The lower tide cycles have been best for both lower- and upper-slot reds.

Speckled trout are scattered in the action, and the trout are mostly staged in the deeper holes.

A few flounder are also mixed in, and they prefer the live bait, too. 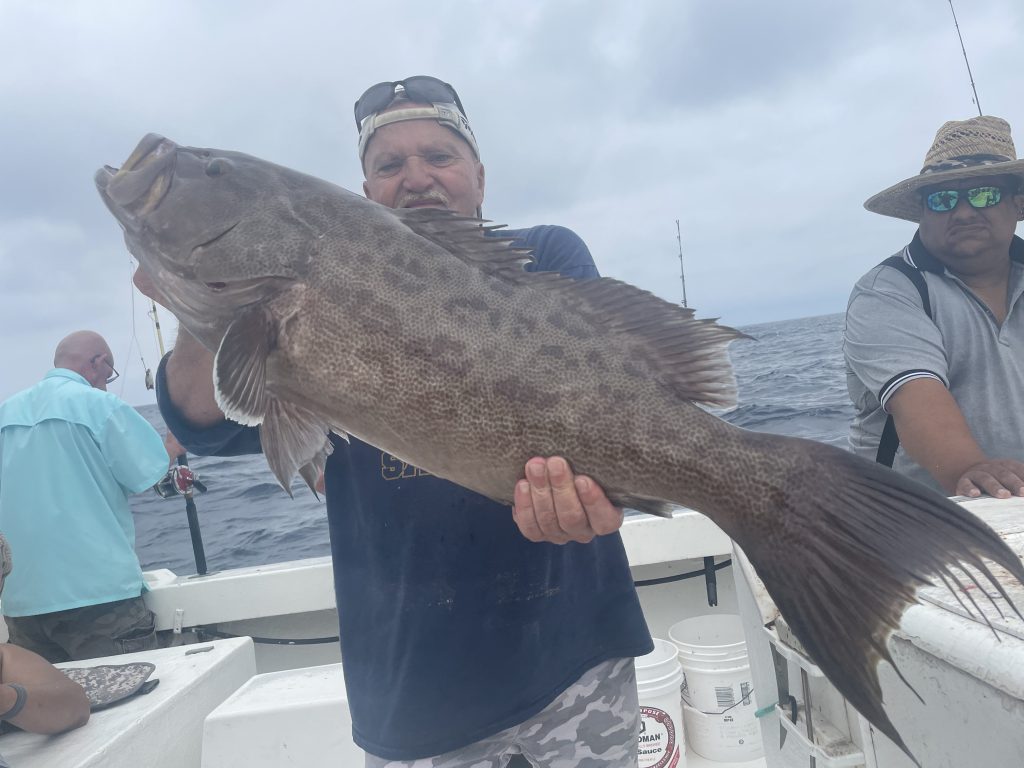 Billy Strehl, from Leland, pulled up this 23 lb. scamp on cut bait 43 miles off of Carolina Beach. He was fishing with Capt. Dave Gardner on the head boat Vonda Kay.

Luke, of Spot On Charters, reports that redfish action has been strong, with plenty of mid-slot schools in the area. The good clarity and high water salinity has the fish very active in their feeding patterns. Carolina-rigged pogies is the top producing setup on most trips, and then topwater plugs have been working well up on the flats. Gold, red, and brown color patterns have been the top producers.

Flounder have been biting very well on the bottom-rigged live baits.

Tommy, of Mungo Fishing Charters, reports that summer has seen inshore water temperatures on the rise, and anglers are targeting red drum early to beat the heat. Carolina-rigged live pogies and cut mullet are both working great on the redfish when targeting them in deeper waters with drop-offs and edges of oyster beds. Assorted topwater baits, Gulp shrimp, and Z-Man soft plastics are also having success.

Targeting speckled trout has been most successful in the early mornings. Soft plastics fished around structure in the 3-8’ depth range has been producing most of the action, but these summer trout are also very responsive to topwater plugs such as the Heddon Spook Jrs.

Anglers may also want to focus their attention on the plentiful black drum in the region. Bottom fishing with fresh crabs in 2-8’ depth range around pilings and oysters will generate some action. On the hottest days, look for these schools to slide into even deeper holes. 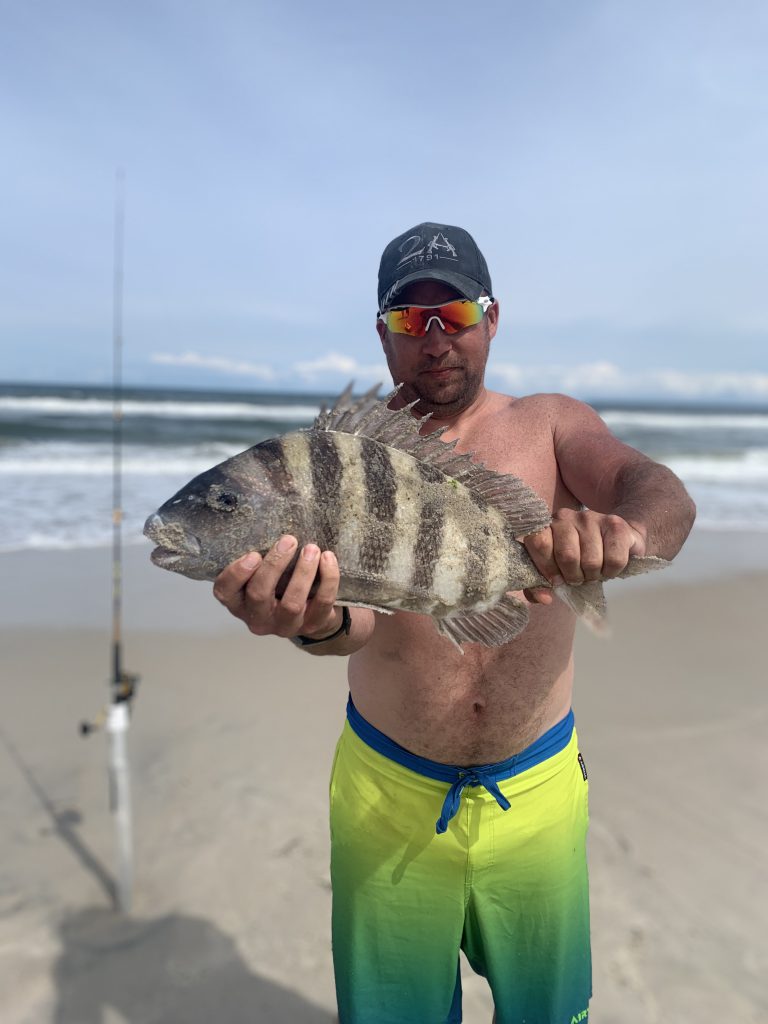 Kevin Harmon with a sheepshead that was hooked using shrimp while fishing the surf in Carolina Beach.

Rod, of OnMyWay Fishing Charters, reports that spanish mackerel fishing remains strong around area inlets. The early morning hours from first light to noon have been the best bet for targeting these schools. The spanish are currently holding deep where #1-2 planers rigged with size 0 Clarkspoons on long 30-35’ leader lines have been producing best. The fish have been very reactive to the pink flash color pattern.

King mackerel action has been best in the 15-25 mile range. Further inshore (from the beach-10 miles), the fish have been very scattered. Pulling cigar minnows on dead bait rigs has been producing strikes. It’s also been a great idea to seek out domestic boxes of bait (from Florida), as the foreign ones have been very low quality. For anglers looking to troll fast and cover ground, pink-colored Sea Witches rigged with belly strips work great. Similar to the spanish mackerel, the key has been to fish deep.

There is a nearshore mahi bite in the 25 mile range for anglers pulling ballyhoo on long lines. Having a live bait out while bottom fishing has also produced some mahi action. Summertime anglers should have a smaller rod rigged with bucktails or smaller hooks for cut squid in the case of running across a school of fish under debris or on structure.

Bottom fishing has been great, with big beeliners holding in the 25-40 mile range.

A mix of American red snapper, gag grouper, pinkies, and large black sea bass are being pulled up from these same structures.

Gulf Stream trips have been hit or miss, mostly based on the amount of scattered grass around. Anglers making the run need to be conscious of temperature breaks and currents inside the break to not over-run the fish.

Woody, of Kure Beach Pier, reports that bottom fishing has been the most productive tactic, and good-sized whiting and croakers have been responsible for the majority of the action.

When the water is clean, look for spanish mackerel and bluefish to make regular appearances around the pier.