Andrew, of Island Tackle and Hardware, reports that blow fish are showing up around the area’s piers. Anglers are having success with smaller chunk shrimp and bait strips on bottom rigs.

Sea mullet have not started showing up in consistent numbers, but that can change any day. Generally, the mullet aren’t too far behind the blow fish and will be caught with the same bottom rig setups.

As the water warms, look for reports of rays and bluefish to be included in daily surf catches.

Inshore anglers are finding small red drum schooled up in creeks and holes throughout the basin. Many look forward to bait arriving in the inlets to get these drum more active.

Around the time bait arrives, so do bluefish in the inlets. Most often the first push has smaller-sized blues. 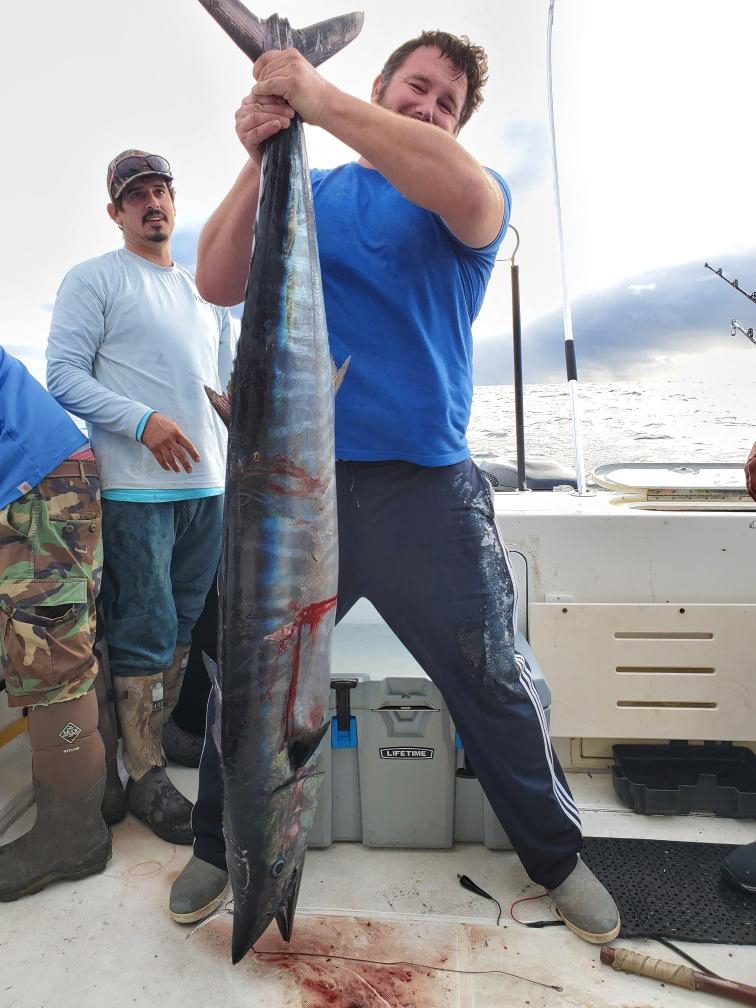 William Roberts caught this wahoo while high speed trolling in the Gulf Stream. He was fishing out of Carolina Beach.

Christian, of Seahawk Inshore Fishing Charters, reports that red drum have been the most reliable target as anglers push through these winter months. There has been a good class of slot-sized redfish that stayed inshore this year, with most schools being up on the flats and over mud or oysters in the creeks. Carolina-rigged shrimp or soft plastics are producing most of the action.

A few speckled trout are mixed in these same areas. The water temperatures have the fish very sluggish, but a slowly worked soft plastic in the right holes has produced a few bites.

Going into the next few weeks, the action is expected to really start to pick up as water temperatures begin to rise. The fish will begin to move a bit more in search of bait versus holding over and consuming just enough to survive.

Tommy, of Mungo Fishing Charters, reports that anglers shouldn’t overlook March when thinking about spring fishing. Most fish are holding their winter patterns, but all it takes are warmer days to get them feeding.

Red drum will be staged up over the flats with muddy bottoms or oyster bars in mainland creeks. Fishing Gulp shrimp on 1/4 oz. jig heads is a go-to setup for some great redfish action.

Speckled trout action will be picking up around the inlets, jetties, and inshore creeks or bays. Areas with muddy bottoms are great targets for inshore anglers, as the sunnier days will warm these waters, getting the fish more energized to feed. Z-Man jerk shads paired with 1/4 oz. jig heads are best in these areas.

Black drum are also a stable target for those fishing holes and oyster bars with deep drop-offs in the creeks. Carolina rigs with the freshest possible dead or frozen shrimp is key to getting strikes. 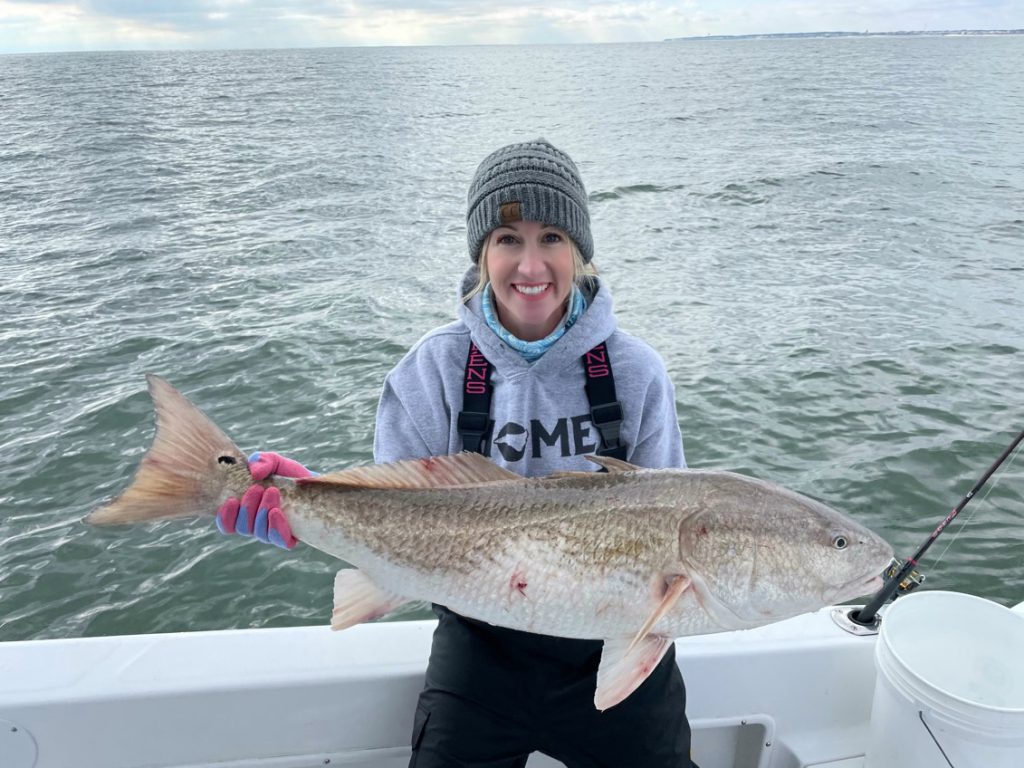 Lesley Keefe, out of Wilmington, with an over-slot red drum that fell for cut bait while fishing the Carolina Beach Inlet.

Rod, of OnMyWay Fishing Charters, reports that there is great black sea bass fishing in the 8-20 mile range. This larger class of sea bass are holding over just about any rocks, ledges, and live bottoms in the area. Depth range hasn’t mattered as much as weather window, with anglers really only needing to focus on the nearshore (8-12 mile) range to find quality fish.

King mackerel action is beginning to pick up, with water temperatures being the most prudent factor. Anglers should be targeting structure with 65 degree temperatures, which right now have been hovering out at 38-48 miles.

The recent run of west wind has pushed the warmer Gulf Stream waters pretty far offshore, but anglers making a long run are getting some African pompano action in the 180’ depth range with vertical jigs.

Getting into March should see some significant changes. King mackerel only begin to push closer in and could be found around the 20-30 mile mark by the end of the month.

Atlantic bonito should be running through the area and schooled up heavily around the nearshore structure first before running the beaches.

Offshore anglers will take advantage of better weather windows to chase after wahoo and blackfin tuna.

With any early season fishing, it is very important to focus mostly on conditions and have good surface temperature shots when deciding where to target.

Woody, of Kure Beach Pier, reports that anglers can look forward to whiting action picking up over the next few weeks. The biggest factor will be weather allowing people to comfortably fish.

A few black drum will be mixed in the counts for anglers fishing shrimp on the bottom, and bluefish tend to arrive around the end of March.