Andrew, of Island Tackle and Hardware, reports that surf anglers have been catching good numbers of pompano and whiting while fishing bottom rigs tipped with sand fleas, shrimp, or Fishbites bait strips. The larger pompano have recently been hitting baits sent out on the further casts than in the wash.

Anglers bottom fishing at the piers are seeing the same species, with the addition of spots in the mix. The piers and the surf are both seeing red drum in all sizes (lower-slot to over-slot) being caught with Carolina-rigged cut baits.

Inshore anglers have been finding plenty of red drum throughout the Cape Fear River, and black drum and sheepshead are both being caught with live shrimp fished around inshore docks and bridges.

Nearshore anglers have found some schools of over-slot red drum while bottom fishing over structure. There are some good-sized flatfish over these same reefs.

Plenty of spanish mackerel are running just off the beaches, and some of these schools have a few larger fish mixed in that prefer live baits.

King mackerel are around the area, though the bite has been largely hit or miss. Anglers both on piers and on nearshore boats are seeing action and anticipate a slight temperature drop will pick the king fishing up.

Offshore anglers are finding the pelagics to be scattered (they’re still in something of a summer pattern). Mostly wahoo are being caught by anglers making the run. 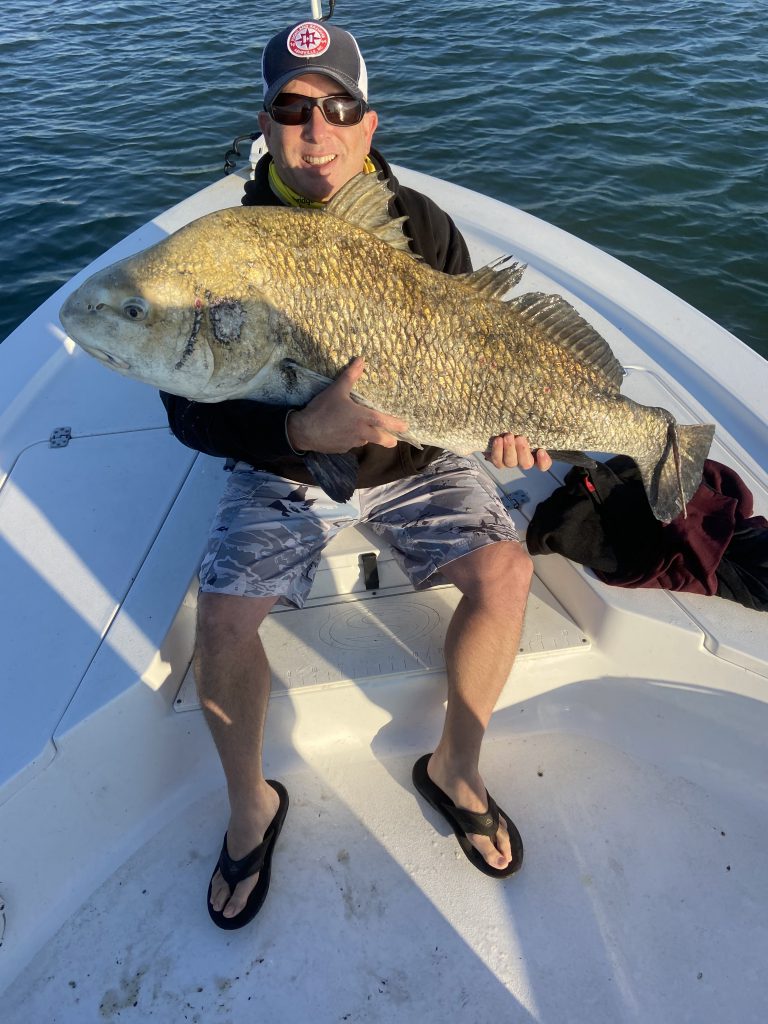 Mike Verdi, from Charlotte, with a 50″ black drum that fell for cut bait on a Carolina rig. He was fishing some nearshore structure with Capt. Luke Moser of Coastline Charters.

Christian, of Seahawk Inshore Fishing Charters, reports that red drum are biting well, with anglers finding a wide variation in the sizes of fish being caught. These under-slot, slot, and over-slot schools are being caught mostly on live finger mullet. Gulp and similar scented soft plastics are also getting strikes, and the lower tide cycles have been more productive than the highs.

Keeper-sized black drum have shown up in decent numbers and are feeding on dead shrimp along the bottom. Carolina rigs or jig heads have worked best to hold baits down, with pretty much any moving tide being best for timing.

Anglers are starting to see scattered speckled trout in the mix. Most of the trout are being caught by anglers fishing live mullet for redfish, but a few are also hitting artificial jigs.

Spanish mackerel and false albacore are roaming the beachfronts when conditions are right. Throwing 3/4 oz. Big Nic Spanish Candy lures in pink color patterns have been the top lure choice.

Luke, of Spot On Charters, reports that red drum fishing has been good all summer and the bite remains strong with plenty of slot-sized fish moving around and feeding on bait.

Flounder are mixed in, as often some nice-sized flatfish are also hitting the bottom baits.

Speckled trout are going to be showing up as the water temperatures continue to fall. A couple more cold fronts and the trout bite should be in full swing by Thanksgiving.

Tommy, of Mungo Fishing Charters, reports that moving into November has anglers changing tactics in the way they target the inshore species.

Red drum will be found up on inshore flats with topwater plugs and soft plastics. Targeting these areas on calm wind days will be key in being able to sight-cast to the schools. Also look for the redfish to be back in creeks where Gulp shrimp will entice some strikes.

Speckled trout are being caught around areas of current and tide seams around structure. A variety of hard lures, topwater plugs, and soft plastics are all having success.

Black drum are plentiful and are being caught around structure and oyster bars with Carolina-rigged live (or fresh dead) shrimp. 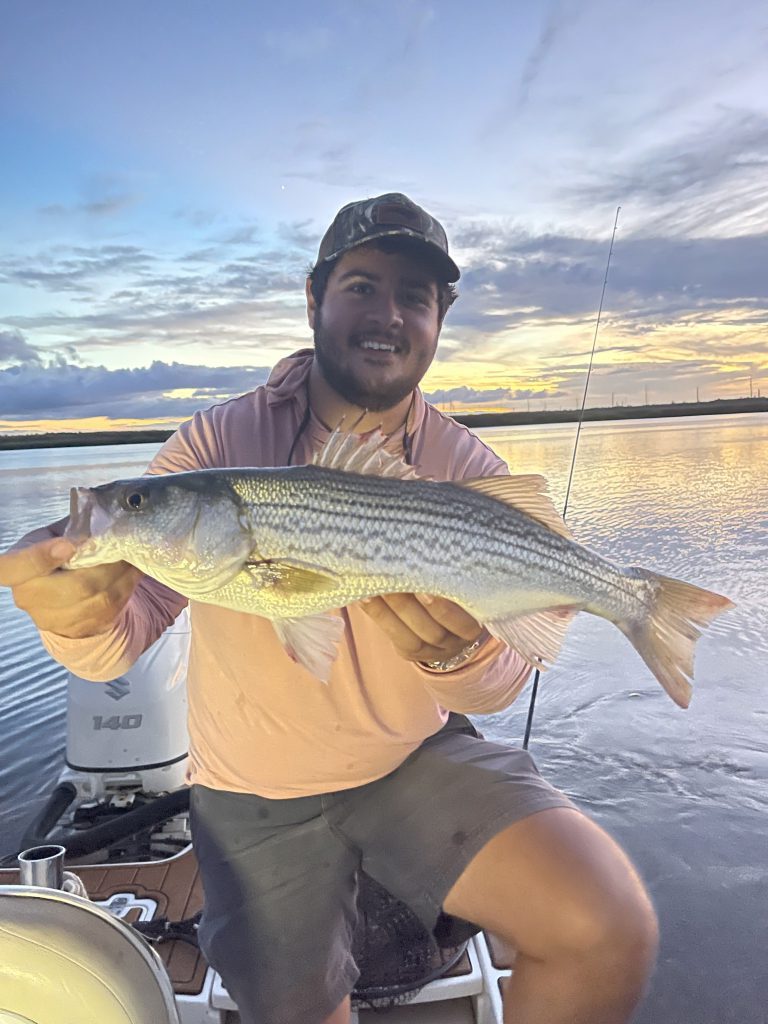 Kevin Collie, of Wrightsville Beach, with a striper that fell for a topwater in the Cape Fear River. He was fishing the sunset hours with Capt. Zane Long of Falling Tide Fishing Adventures.

Rod, of OnMyWay Fishing Charters, reports that spanish mackerel action along the beaches has been phenomenal. These are mostly a larger class of fish (to 26”) that have smaller ones mixed in. The go-to Clarkspoon setups on longer leaders have been great in getting strikes, and the spoons with pink or pink/chartreuse color patterns have been unstoppable.

There are a bunch of false albacore mixed in right alongside all the spanish.

King mackerel have moved onto the beachfronts and are taking advantage of all the roaming bait in the area. Anglers have been able to find huge schools of pogies around. Slow-trolling live baits from the inlet out along the beaches has been producing strikes. Some bigger kings (to 40+ lbs.) are being caught out in the 5-8 mile range.

Offshore bottom fishing has been really good. Anglers working structures and live bottoms in the 22-35 mile range are catching a variety of grouper, big black sea bass, and snapper. Don’t be surprised to find some scattered nearshore mahi and cobia around in this 22-40 mile range.

Gulf Stream runs are producing some wahoo, mahi, and good blackfin tuna action. With water temperatures just starting to drop, it is very important to get a good water shot before leaving the dock to target breaks instead of heading out to these vast warm water areas.

A few schoolie king mackerel (to 20+”) are being caught on live baits.

Some good-sized pompano (to 2 lbs.) are being caught by anglers bottom fishing, but most of the bottom action has been focused on the nighttime hours where anglers are catching Virginia mullet and croakers.