Christian, of Seahawk Inshore Fishing Charters, reports that red drum have been biting well. On most days, anglers are landing a handful of upper-slot fish with some over-slots mixed in. With the bait pushing around inshore, it has been productive to “match the hatch” and use some of the live finger mullet around. Rig these live baits on 1/4 oz. jig heads or Carolina rigs.

Flounder fishing remains steady as well. The flatfish are going to be found by anglers fishing live baits against sandy grass edges while targeting red drum. Most of the flatfish have been in the 16-17” range.

A few black drum are starting to show up. Most have been smaller, but there are still plenty of keepers in the mix. Fishing fresh dead or live shrimp on the bottom around docks and rocky structured areas has produced the most action.

Luke, of Spot On Charters, reports that flounder season was very productive, with anglers finding quality in both size and numbers. With the upcoming mullet run, anglers still expect to see plenty of flounder caught while fishing live bait for other species.

Redfish action has been steady. As the patterns move away from the summertime heat and bait begins to transition, look for more successes with Carolina-rigged live mullet or pogies. Deeper zones around the inlets have been great areas to target on outgoing tides as it flushes this bait out into the ocean. Early mornings and especially nights have been best for timing a feeding pattern.

Speckled trout has been hit or miss, but it is still early for this fishery. Anglers look for water temperatures to cool a bit more before they start to really see activity ramp up from the trout. 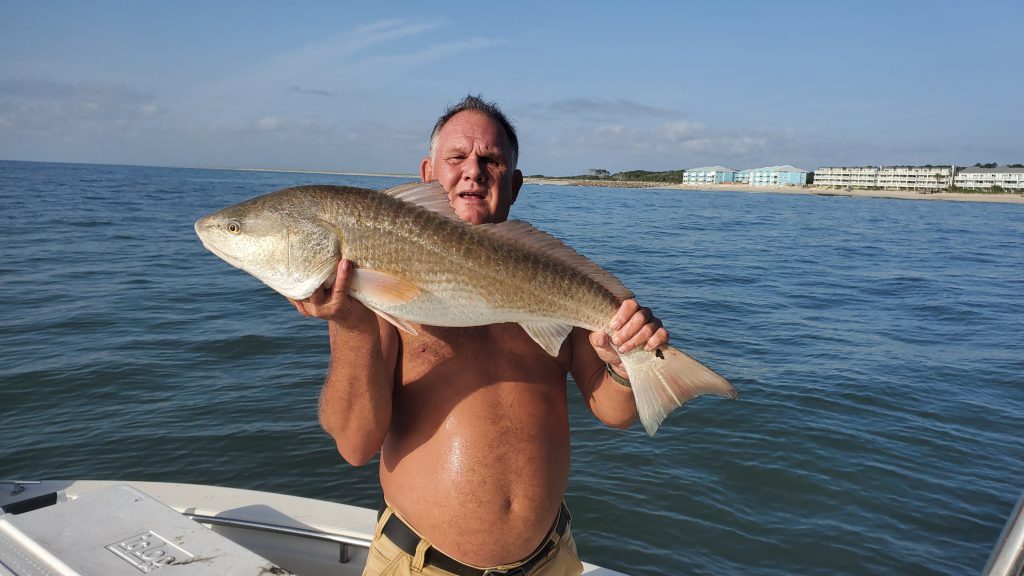 Noah Zimmerman caught this red drum using a live pogie while fishing off of the Fort Fisher beach.

Tommy, of Mungo Fishing Charters, reports that anglers are already starting to see the fall action pickup for the inshore fisheries.

Red drum are being caught on Z-Man PaddlerZ, Rapala Skitterwalks, and similar topwater plugs. Fishing with live mullet is always a plus, but the advantage to artificial baits is to allow anglers to work areas quicker.

Speckled trout are being hooked on both live and artificial D.O.A. shrimp. Targeting areas with current or a little moving water has provided the most success. On calmer days, anglers are getting strikes with Heddon Spook Jr. topwater plugs fished around structure.

Rod, of OnMyWay Fishing Charters, reports that seasonal changes have pushed tons of bait along the beachfronts. Plenty of schools of glass minnows and mullet in the area have caught the attention of a larger class of spanish mackerel. Trolling Clarkspoons has been doing the trick in landing these bigger spanish.

While trolling nearshore, it has been a good idea to have out a pin-rigged bait or Big Nic Mac-A-Hoo. This helps the possibility of landing one of the larger kings (to 30+ lbs.) in the area.

For targeting king mackerel, the 8-10 mile range has still been the most productive.

Some mahi are being caught out around the bluewater line, which has currently hovered around the 23 mile range. There are also king mackerel and plenty of barracuda in this zone.

Bottom fishing from 20-40 miles out has seen plenty of beeliners, black sea bass, grouper, and snapper, and trolling over structure in this range has produced a few wahoo and blackfin tuna.

Most wahoo action has been out at the break, around the 130-180’ depth range. Targeting rockpiles and ledges has been best, as anglers have noted that these packs of wahoo love structure. Fishing baits deep is key, with ballyhoo setups or deep diving Nomad or Rapala Mag-40 lures working well. Going into the later part of the month, pay attention to the water temperature shots to hone in on temperature breaks in the 140-220’ range for the best chance of success. 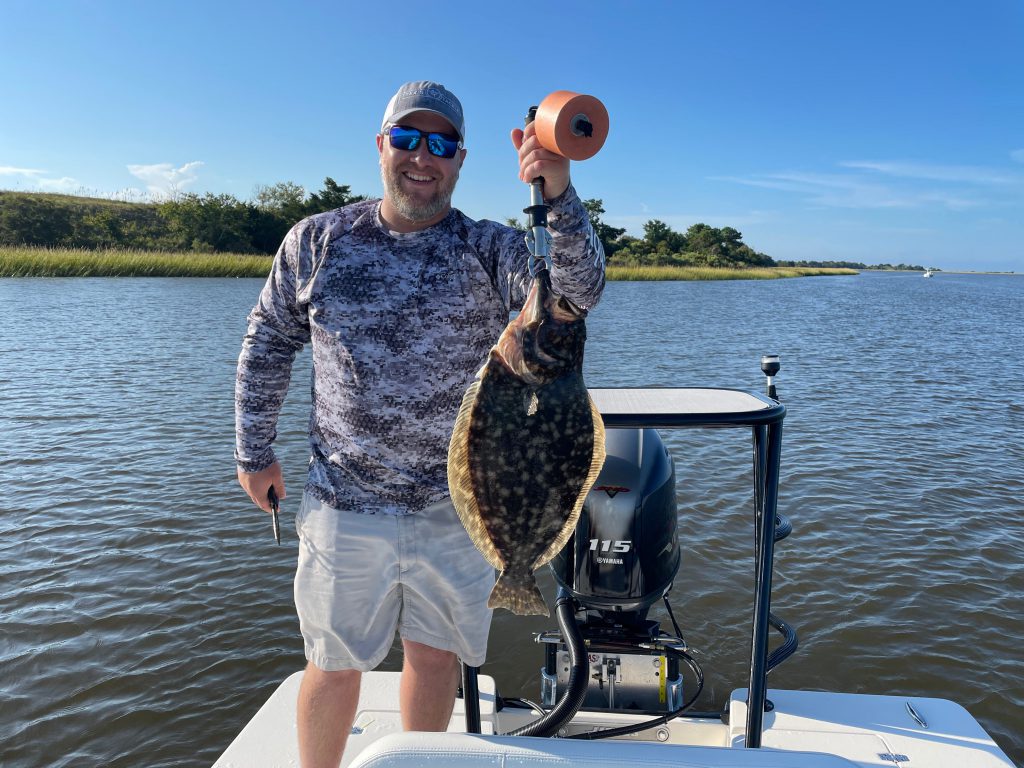 Kyle Campbell, of Boats Unlimited, with a citation flounder that hit a spinnerbait in the Cape Fear River behind Kure Beach. He was fishing with (and outfishing) Matt Mabe.

King mackerel action has been a bit slow, though the mullet run kicking off in the area should see the action turn for the better in upcoming weeks. The live baits being fished off the end are currently producing some large spanish mackerel.

Ribbonfish have been showing up in good numbers for anglers out at night.

Bottom fishing is producing croakers and throw back flounder.