Andrew, of Island Tackle and Hardware, reports that the red and black drum action has been great inshore. Anglers are having plenty of success while targeting deeper holes with nearby structure or oyster beds. The red drum have been hitting Carolina-rigged live or cut mullet and pogies, as well as soft plastics. On the flats around the spoil islands in the river, topwater plugs have worked well for anglers out on the water early.

The black drum feed mostly on shrimp, and the fresher, the better.

There has been good flounder fishing from docks along the ICW, to holes in the river, and out on the nearshore wrecks. Carolina-rigged live bait and bucktail jigs with soft plastic trailers both are top producing setups.

Anglers on the Cape Fear have reported some schools of tarpon rolling on the surface around Fort Fisher.

Surf anglers have been catching the regular mixed bag of summer species including whiting and croakers. A few large pompano have also been weighed in.

Not many anglers have been making the long run offshore, but there is scattered mahi and sailfish around for those that do. 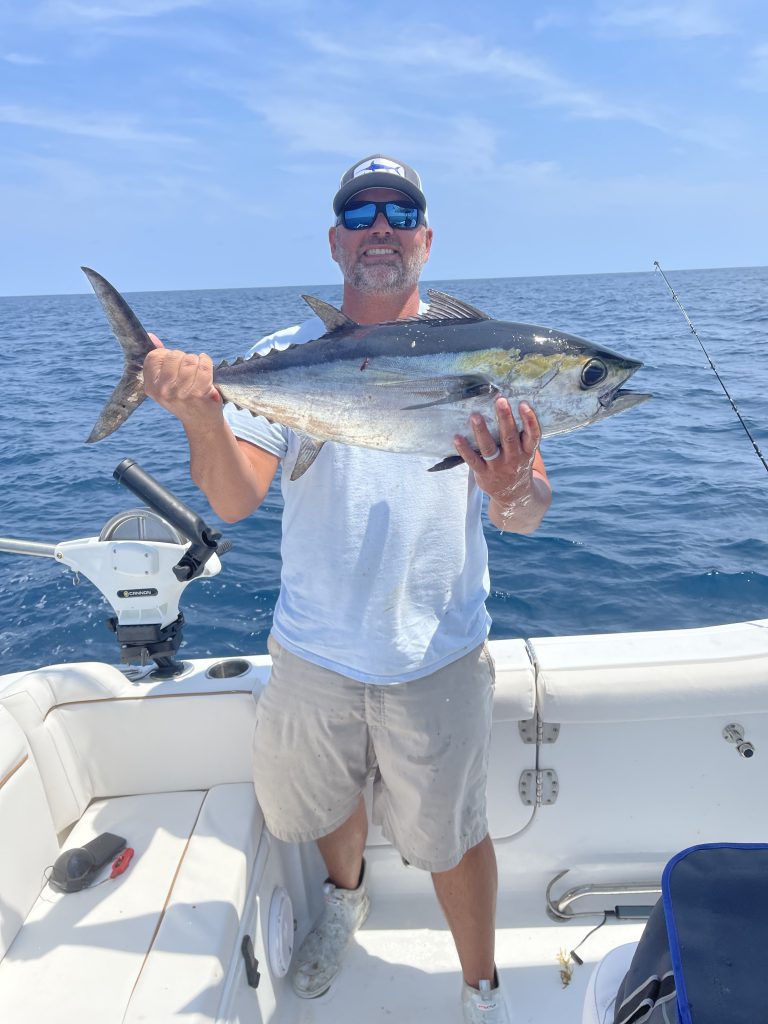 Rusty Plummer, from Hampstead, with a tuna that fell for a homemade daisy chain while fishing 23 Mile Rock.

Christian, of Seahawk Inshore Fishing Charters, reports that there has been steady action on red drum. It has been a great class of mid- to upper-slot fish, with some over-slots mixed in. Finger mullet fished on the bottom has been best, with either tide cycles getting the reds into a feeding pattern.

Anglers are catching a few flounder mixed in the same areas as the drum, and a majority have been a class of 15-18” flatfish. Rigging finger mullet on lightweight (1/4 oz.) jig heads is great for keeping baits in the strike zone.

Some speckled trout that are held over in some of the inshore holes are hitting these same live bait offerings.

Luke, of Spot On Charters, reports that red drum action remains steady on the inshore flats and along grass banks. There is plenty of bait inshore, and the bait has the reds feeding aggressively, especially early before it gets too hot.

The best plan for landing flatfish is to work baits along the bottom near structure.

Tommy, of Mungo Fishing Charters, reports that September is the month where anglers really see patterns change, as mullet start to show up very thick both inshore and just off the beach. The mullet mixing with the already plentiful shrimp, as well as water temperatures dropping a few degrees, get the fishing action fired off.

Red drum are being found by anglers targeting the flats with topwater Rapala Skitterwalk plugs in a variety of colors. Soft plastics (Gulp or Z-Man) are also great when rigged on the lighter weight (1/4 oz.) jig heads. Anglers with live bait will find success casting Carolina-rigged mullet around deeper inshore structure, such as oyster beds and rocks.

Speckled trout are being targeted on the calmer days with the same topwater plugs and soft plastic offerings. Deeper channels or holes around structure and with a good flowing current are best. These areas will be holding bait, so floating a live shrimp or mullet will be the most effective tactic.

Black drum fishing has been great for anglers casting Carolina or bottom sweeper-rigged fresh dead shrimp. Target areas around oyster bars and other rock structure. The water temperatures cooling will get the black drum fired up.

For flounder, using larger (5”) soft plastics around structure both shallow and deep will help locate fish. Live menhaden or finger mullet on Carolina rigs fished in deep holes around the oyster bars is another great way to target the flatfish. 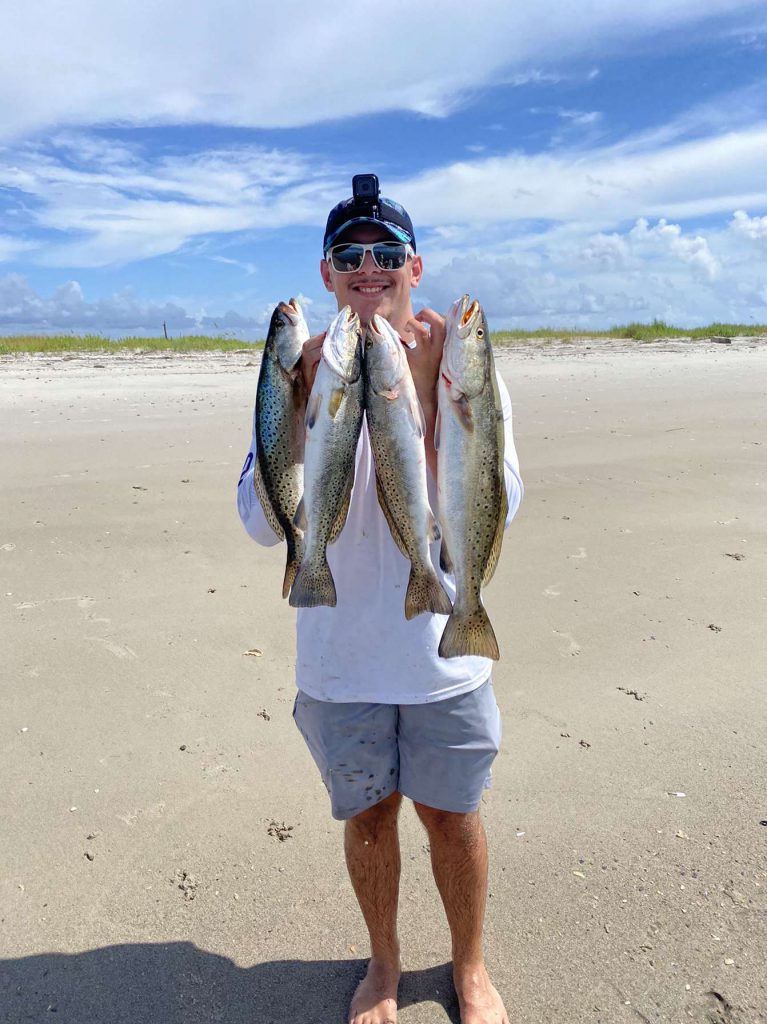 Jack Kadnar with some trout that were caught on mullet while fishing the Carolina Beach Inlet.

Rod, of OnMyWay Fishing Charters, reports that spanish mackerel have been plentiful from the beachfronts out to about 40’ of water. Many of these schools are smaller fish (to 18”), but there are also schools of good-sized keepers as well. Trolling Clarkspoons with long leaders remains key to getting action from these spanish, as they hold deeper to avoid the heat. With the large amounts of glass minnows pushing out the inlets, all it takes is the right conditions or cooler morning hours to find a frenzied school or two on the surface.

King mackerel have been holding mostly in the 8-10 mile range, with fish scattered out to the 30 mile mark. When the water temperatures nearshore are extremely high (80-85 degrees), no matter the targeted species, anglers will find the bite to be scattered.

Mahi are still scattered throughout the area, with some nearshore action as close in as just under 10 miles.

Bottom fishing has been really good for the typical summer species, with action in the 10-25 mile range.

Not many anglers have been running out to the Gulf Stream, but with the water so hot, there isn’t much of a need to. Bottom fishing is the most consistent bite for those making the haul. As fall gets closer, the nearshore water temperatures will cool and start to congregate more fish along the break.

Jackson, of Kure Beach Pier, reports that bottom fishing has been good, with a true mixed bag for anglers rigged with fresh shrimp and cut baits. Whiting, croakers, and spadefish have all been coming over the rails.

A few speckled trout have been landed during the cooler morning and evening hours.

Spanish mackerel are being caught with Gotcha plugs and casting jigs, and scattered bluefish and ribbonfish round out the action.