Ryan, of Hatteras Jack, reports that surf anglers have begun to see pufferfish showing up for those rigged with bloodworms, squid, or shrimp.

Sea mullet are mixed in and hitting the same baits on both bottom rigs and hand-tied rattle rigs.

Black drum and scattered red drum are showing up, and both are hitting the bottom-rigged baits. Black drum most often feed on shrimp.

The backwaters are starting to come alive with catches of a few speckled trout and red drum. It has been best to target both species on the warmer days, looking for areas of grassy and muddy bottoms behind Oregon Inlet that help raise water temperatures.

Terry, of Rodanthe Pier, reports that with water temperatures on the colder side, anglers have been catching dogfish sharks and small striped bass.

Going into April, the weather tends to stabilize, and sea mullet should be arriving in the region.

Blowtoads and a few speckled trout should be mixed in, with most action coming off fresh shrimp fished on bottom rigs.

Towards the end of the month, red drum should be running the beaches. 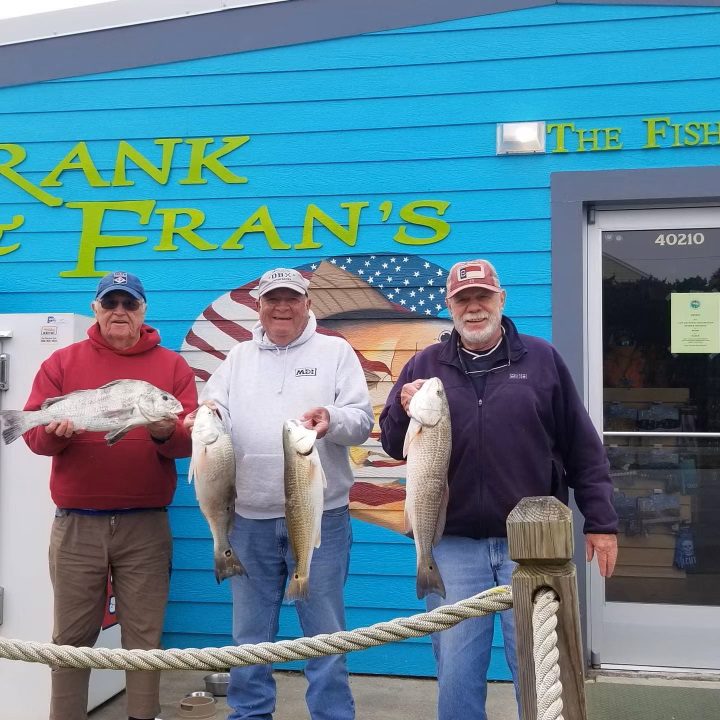 Ronnie, Bruce, and Marcus, from Catawba County, with redfish and a black drum caught using bait from the surf. Photo courtesy of Frank & Fran’s.

Stephanie, of Frank and Fran’s, reports that there has been some good action on sea mullet and blowtoads on the southern Frisco beaches. The go-to bottom rigs tipped with shrimp or bait strips are producing best.

A few puppy drum are being caught in the sounds. With water temperatures starting to tick up, these fish are moving onto the flats to feed.

Speckled trout are also being caught during the warmest hours of the day. Both the trout and red drum will get more active in the next few weeks as these shallow inshore waters warm up.

Surf anglers should continue to see sea mullet numbers pick up along the beaches. Some spot could also begin to mix in with this bottom rig action.

Puppy drum will be caught along the beaches as schools from both the sound and the ocean move into the surf zone.

Bluefish should be pushing into the area by the end of the month, but with early season fishing, much depends on water temperatures.

Denny, of Frisco Tackle, reports that some anglers are finding scattered red drum action in the surf. It is still early in the season, and so consistent weather should lead to more fish being caught.

Blowtoads and sea mullet have begun to show up in the region, with this first action coming from the Frisco beaches. Over the next month, anglers look forward to seeing the larger sea mullet arrive as more fish push into the area.

Bluefish could show up in the area by the end of April, but this is very dependent on water conditions and could be delayed by the cold winter we had.

Pat, of Teach’s Lair, reports that blackfin and scattered yellowfin tuna are being caught offshore and should continue through most of the month.

Some early season wahoo will be mixed in the counts by those trolling, and the first wave of dolphin tends to show up in the area around the end of the month.

Sound anglers in Hatteras are catching sea mullet and some red drum. 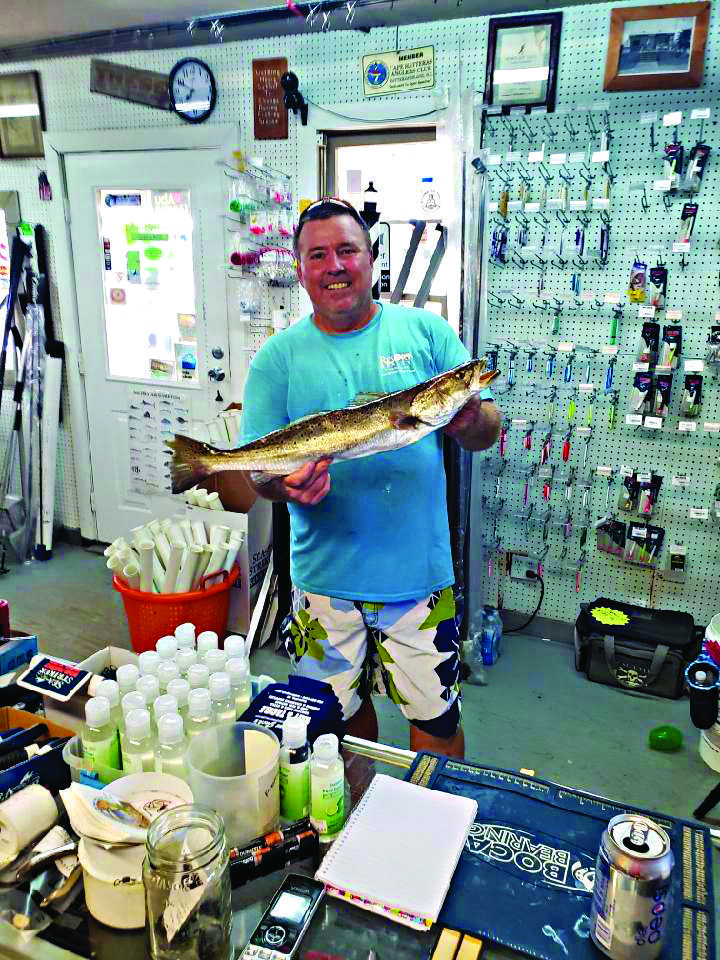 Abby Midgett with a speckled trout hooked while fishing in the Hatteras area. Weighed in at Hatteras Jack.

Joey, of Fingeance Sportfishing, reports that anglers fishing cut baits around Hatteras are starting to find some red drum action. A good number of those caught are over-slot reds (up to 50”).

Speckled trout fishing is just starting to kick off with water temperatures picking up. As long as these favorable weather patterns continue, expect to see both fisheries get better as the month goes along.

April going into early May is a great time to target the mainland rivers for spawning striped bass action as the schools push in from the sound.

Jay, of Bite Me Sportfishing, reports that spring fishing is right around the corner, with anglers looking forward to blackfin and yellowfin tuna action getting even better as the month goes along.

Large, scattered wahoo and some king mackerel will be holding over these offshore rocks, and the first waves of gaffer-sized dolphin should be arriving during the month.

Jeremy, of Calypso Sportfishing, reports that yellowfin and blackfin tuna are holding around rocks southeast of the tower.

Scattered bluefin tuna are in the mix and will continue to stick around until the water warms.

Mahi start to gradually show up as the month moves along.

Jessie, of Carolina Girl Sportfishing, reports that yellowfin and blackfin tuna action has been good for anglers taking advantage of the nice weather days.

The blackfin tuna have been very active in their feeding, with anglers having success both jigging and kite fishing.

Kristen, of Tradewinds Tackle, reports that anglers are beginning to catch puppy drum with shrimp and finger mullet.

Some speckled trout are being caught in the sounds now that water temperatures are starting to rise.

With sand fleas beginning to be available on the beach, anglers look forward to seeing some black drum and sea mullet being caught on bottom rigs.

April fishing sees the quantity of fish getting better as warmer water pushes fish back into the surf zone.