Ervin, of Hatteras Jack, reports that surf anglers are still seeing some decent action as we move into the colder winter months. Bottom rig setups are producing some sea mullet and puppy drum, and there has been a massive number of dogfish sharks and skates being caught on cut bait. Both species are a wintertime staple and provide a great fight for anglers looking to wet a line during warm weather stretches.

Also, on the warmer stretches of winter, anglers on the southern beaches can find holes holding some speckled trout. 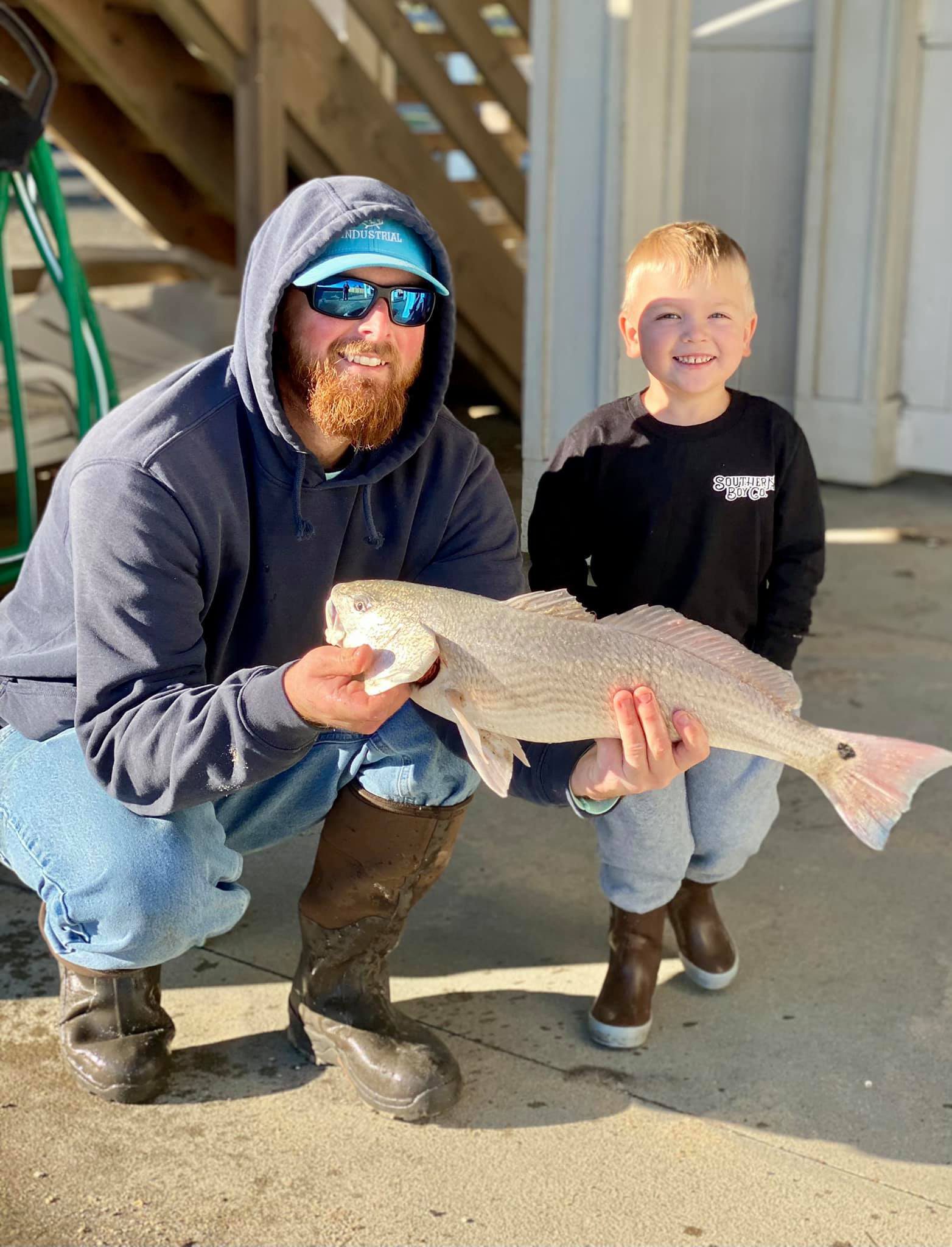 Maddox Bowling (age 4), of Winnabow, caught this 25″ red drum that fell for shrimp while fishing the surf in Cape Hatteras.

Heather, of Frank and Fran’s, reports that large citation-class sea mullet (to 2.4 lbs.) have been pushing through the area for anglers fishing with the freshest bait shrimp they can find.

Good-sized black drum and blow toads have also been mixed in on this bottom fishing action.

Anglers around Buxton are catching scattered bluefish, and targeting the deeper holes with Carolina-rigged cut mullet has been producing puppy drum.

Keith, of Avon Pier, reports that anglers enjoying the end of the pier season found success while bottom fishing with fresh bait shrimp. A mixed bag of sea mullet, spots, and scattered speckled trout were all in the landings.

The pier closes for the season, but anglers looking to be in the area will find bottom fishing from the beachfront to produce sea mullet, skates, and small sharks right into the coldest months of winter.

A good amount of flounder releases have been generated by anglers fishing deeper holes between sandbars and in the wash.

Puppy drum are moving up and down the beaches, and they’re mostly hitting smaller chunks of cut mullet.

Nearshore anglers have been doing great on king mackerel while live bait fishing. Fluctuating weather patterns don’t have this bite consistent, but there are definitely some large fish mixed in (to 60 lbs.).

A bluefin tuna has already been caught, and there have been more landings of these giants south of the area. If the migration is similar to past seasons, there will be some of these fish around for properly equipped anglers to go after.

Going into January, surf anglers will continue to see scattered action on speckled trout, puppy drum, and black drum, and mild winter weather could keep this action around for even longer.

Offshore anglers will be running out to structure in the Gulf Stream in search of blackfin tuna and scattered yellowfin.

King mackerel action should remain strong right through the end of the year when cooler waters will finally push them out of reach.

Bluefin tuna become more of a possibility in the late winter, but again, this action is all based on their migration patterns.

Joey, of Fingeance Sportfishing, reports that sound side water temperatures have been dropping quick in the area, and this drop has many fish species transitioning to their winter haunts. The warm weather stretches, though, have still allowed for good fishing for anglers rigged with live or fresh bait shrimp. Speckled trout, black drum, and red drum are all mixed in this natural bait action. A few more cold fronts will see most fish move into their winter holdover areas that include pushing into the ocean and up the mainland river and creek systems.

Anglers should look forward to targeting striped bass as the water cools even more, as these fish are heartier in colder temperatures. The main river systems and tributaries off the sound see a legendary striped bass bite that is looked forward to after the turn of each new year (until spring fishing arrives). Currently, these schools of stripers are up in the brackish sound waters and staged around deeper water bridges and similar structures. 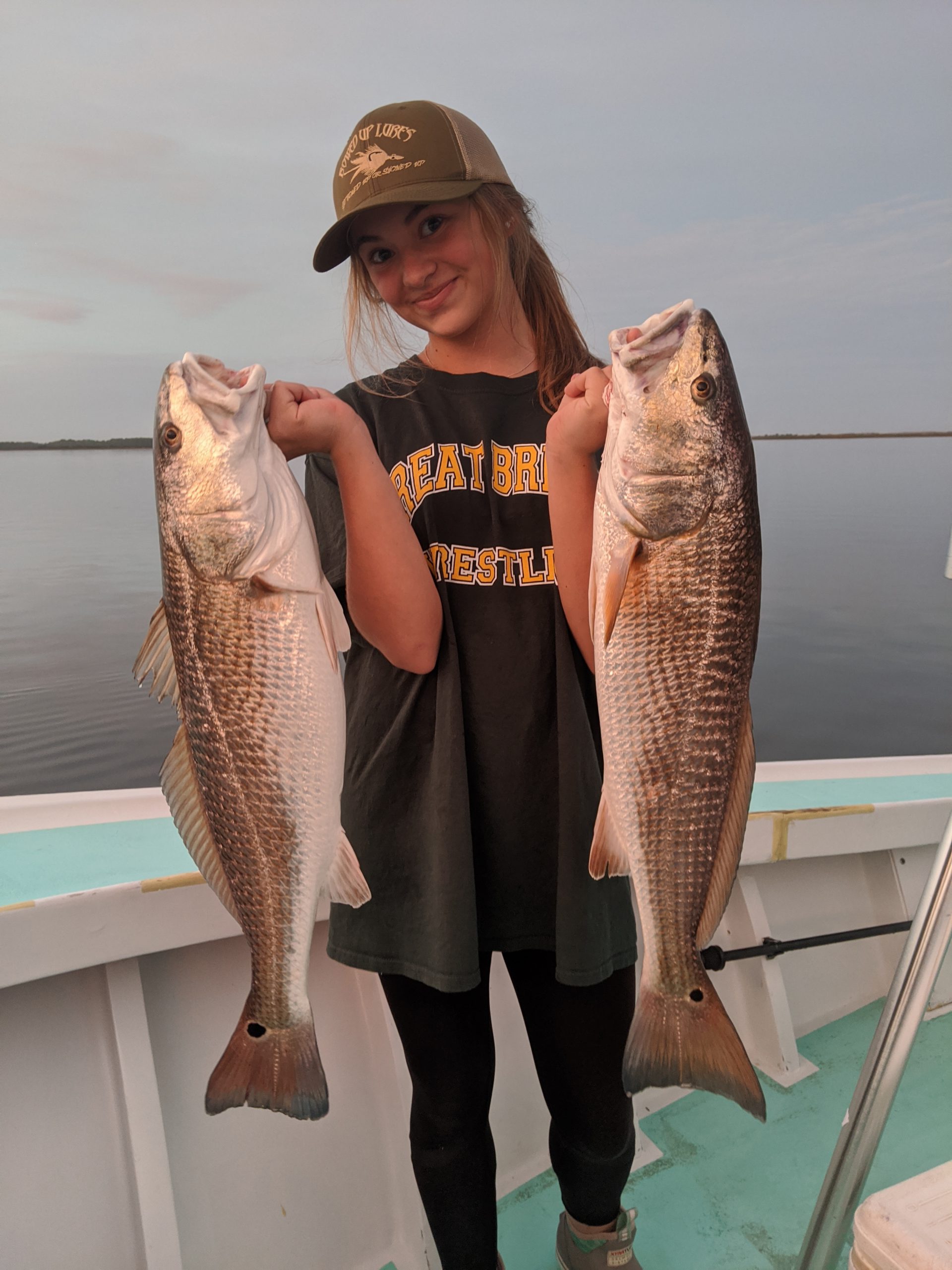 Jay, of Bite Me Sportfishing, reports that weather cooling down in the winter doesn’t stop fishing efforts in the Gulf Stream. Anglers taking advantage of weather windows will find a mix of wahoo and blackfin tuna over structure in these warmer Stream waters all winter.

King mackerel fishing has been great for anglers fishing the mid-range areas and out to the break. Live bait has been best, but plenty of fish are being caught with dead bait setups. This bite should last until cool waters push them out.

In past seasons, cold winter temperatures have seen a migration of bluefin tuna move into the area. Area anglers hope to see these giant fish push onto the beaches again in the winter months.

Jeremy, of Calypso Sportfishing, reports that live bait king mackerel action has been on fire, with huge citation-class fish (to 60 lbs.) feeding over structure and around current breaks. This action will last through December before cooler water temperatures push the kings out of the area.

The offshore action is more dependent on favorable weather windows than anything in the wintertime. Anglers looking to get offshore in the winter could find wahoo and blackfin tuna out in the Gulf Stream.

The region has also seen bluefin tuna arrive in past seasons, and with this fishery being migration-dependent, anglers can keep an eye on local reports to see if they arrive once again this season.